Islamic State ‘on verge of collapse’: Militants ramp up internet war as terror group faces defeat in Syria ‘within weeks’

By Defence And Security Editor For The Daily Mail

Islamic State is ramping up its internet war as its so-called caliphate faces destruction on the ground.

Christopher Ghika, who is Britain’s top commander against the group, said terrorists in Syria and Iraq were trying to ‘reassert’ themselves online.

Speaking from Baghdad in his first major interview, the major general said Britain and its allies were hunting down the online jihadis.

Warplanes have already blitzed a media centre used by the fanatics.

He said IS had been reduced to a tiny sliver of territory and would be defeated in Syria within weeks.

Pictured: Video posted last month by supporters of the Islamic State group showing a man firing at members of the U.S.-backed Syrian Democratic Forces in Syria

But he warned the terror group would continue to operate in Iraq and set up sleeper cells.

‘They are in a pocket now which is a couple of miles by a couple of miles,’ said General Ghika. ‘Those who are left are a hard core. They have seen the gradual shrinkage of the physical caliphate.

‘In 2014 it was something about the size of the United Kingdom. I think within the next weeks or so it will be done.’

‘They no longer have the freedom to print. But their presence in the information space is something which we are going after as vigorously as we go after their presence on the ground.’ 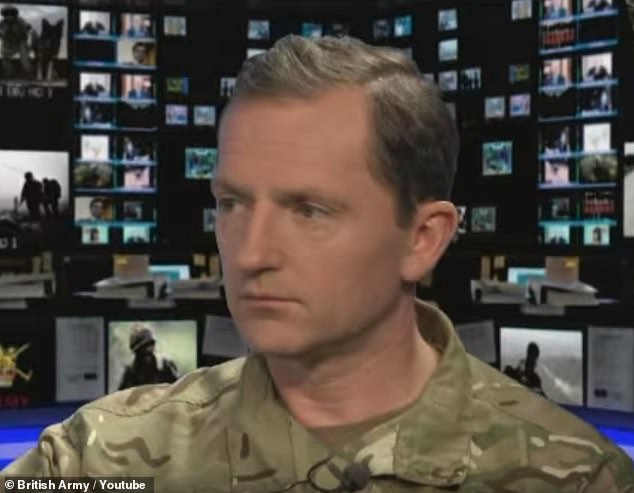 Britain’s top commander against the group, Christopher Ghika, said terrorists in Syria and Iraq were trying to ‘reassert’ themselves online

General Ghika said coalition powers were working with Iraqi security forces to stop IS insurgents returning to towns liberated from the group.

‘We have got a very widespread operation in Iraq to defeat them there,’ he added. ‘I think they will try and move from Syria into Iraq and will try to set up a series of cells maybe with a command network.’

He said the group’s leader, Abu Bakr al-Baghdadi, would be found and killed.