An Islamic TV station that said gay people are worse than pigs and magicians should be executed faces being stripped of its UK broadcasting licence.

Peace TV, based in Dubai, was found to have shown four programmes which breached Ofcom regulations on inciting crime, hate speech and abuse.

The channel, which is broadcast on Sky, said the programmes were based on Islamic teachings.

Peace TV, based in Dubai, featured a long rant about the ‘evils’ of homosexuality by Imam Qasim Khan

The regulator said one show – called Strengthening Your Family – The Valley of the Homosexuals – made reference to homosexual people dying ‘from a disease they contracted because they are homosexual’ and said homosexuality was ‘a very unnatural type of love that is energised by the influence of (Satan)’.

According to the Ofcom report, presenter Imam Qasim Khan said: ‘Then they make laws now, the newest and most brash and insane laws, laws that protect homosexuals and even make it legal for them to marry each other.

‘Men marrying men. Being on television in front of our children, kissing each other in the mouth, walking down the street, hugging and kissing – this society has gone insane.

‘Even an animal that is defiled by Islam, the pig – as nasty and corrupted and contaminated as a pig is – you never see two male pigs that are trying to have sex together. That’s insanity.

Lord Production, who hold the licence for Peace TV, said the March 2018 show was ‘an expression of Imam Qasim Khan’s views on male homosexuality, reflecting the teachings of Islam’. 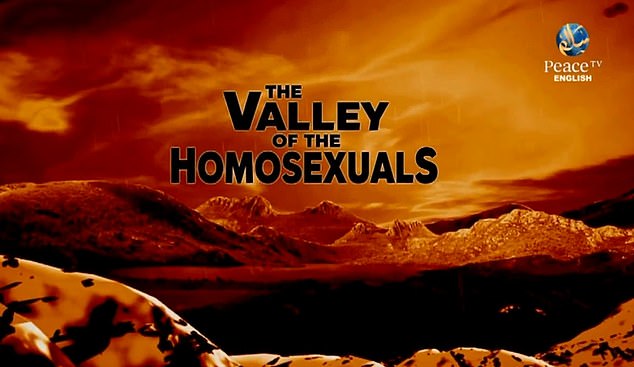 It disagreed with Ofcom’s suggestion that the Imam’s views were hate speech as, according to the report, he did not ‘call for violence or punishment of homosexuals’ and that his aim was to ‘outlaw the practice of homosexuality itself’.

The channel also broadcast a programme in November 2017 with a scholar discussing execution for those who practice magic, or sahir.

Under section three of its code, Ofcom reserves the right to ban any TV or radio broadcast that promotes ‘crime, disorder, hatred and abuse’.

The code includes an exception that allows journalists to interview people with ‘extreme or challenging views’ if it is in the public interest to do so.

In judging whether the code has been broken, Ofcom will examine whether the programme has sufficiently challenged the views, or if it actively promoted them.

In the case of Peace TV, its long, unchallenged rants by Imam Qasim Khan were clearly in breach of section three.

‘The correct reliable and majority opinion is that the punishment for a Sahir is that the person should be killed,’ said scholar Shaikh Ashfaque Salafi, according to the Ofcom report.

‘I want to make it clear that the magician’s art or the practice of magic cannot be forgiven by way of repentance.

‘To save his life he may seek repentance and get away with it, but at the first opportunity when he has a dispute with someone he will use his magic skills.

‘For that reason, for the benefit of all it is better to cut it out from its roots.’

The producers said magic, or sahir, in this case was not about ‘Harry Houdini, Paul Daniels, David Blaine or other entertainers performing magic tricks for money or fun’ but rather witchcraft and sorcery.

Ofcom recorded two further breaches: one where a programme said those who left Islam should be punished by death and a second where it was said women under 18 getting married was ‘no problem at all’, even if local laws forbid it.

A fifth programme which was investigated was found not to be in breach.

According to Ofcom, Lord Production said its programmes were ‘derived from a particular religious viewpoint, of which its viewers would be aware, and that such programming includes advice to those viewers as to how to lead their lives. It should therefore not be surprising if, at times, such advice causes offence to different sections of the public’.

The regulator said it will consider breaches for the imposition of a statutory sanction.