Islamist arrested as arms cache is seized by Berlin police

A suspected Islamist militant has been arrested and a cache of weapons seized during an overnight police raid in Berlin.

Officers arrested the 40-year-old German citizen while carrying out four raids during which they also found weapons, weapon parts and ‘large quantities of ammunition.’

Investigators said they uncovered no evidence to suggest an attack is imminent.

Images released by the police show two AK-type assault rifles were seized, along with magazines, and at least a dozen containers filled with bullets of various calibres, including shotgun shells.

The suspect, who has not been named, will come before a judge later in the day, the police and the public prosecutor said in a joint statement.

‘Due to concerns the weapons could be used for attacks, Berlin prosecutors took over the investigation,’ the authorities said.

‘After it was determined that (the suspect) displayed an increased willingness to use violence, it was decided to arrest him. 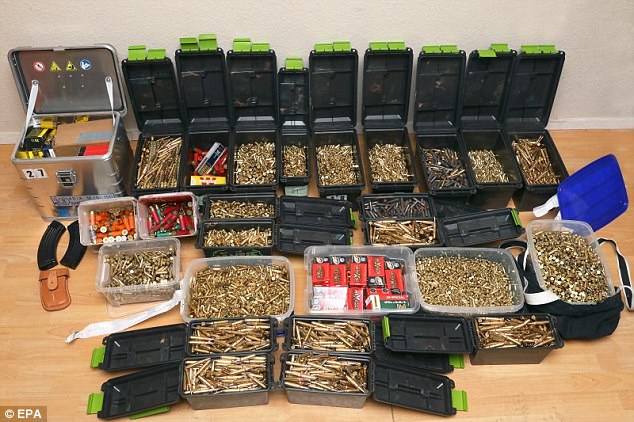 Officers found at least two AK-type rifles along with a dozen containers filled with hundreds of bullets in different calibres, including shotgun shells

‘The suspicion of weapon possession was confirmed, without any evidence so far of a concrete attack plan.’

The suspect came to their attention in the course of another criminal probe, they added.

German police have been on high alert to the threat of Islamist attacks after a truck rampage claimed by the Islamic State group killed 12 people in Berlin last December.

Officials admitted a series of security failures that allowed Amri to register under multiple identities and evade authorities while he was in contact with militants.