The remains of what may be the largest predatory dinosaur ever found in Europe have been unearthed on the Isle of Wight.

Paleontologists say the huge crocodile-faced dinosaur – which at 32.8ft (10 metres) long almost as big as a London Bus – lived 125 million years ago and would have weighed several tonnes.

The ‘giant killer’ was a member of the spinosaurids, the first dinosaurs known to swim, so may have been able to hunt in the water as well as on land.

It would have lived at the beginning of a period of rising sea levels and would have stalked lagoonal waters and sandflats in search of food.

Several prehistoric bones belonging to the ‘White Rock spinosaurid’ – named as such because of the geological layer in which the remains were found – were discovered on the island off the south coast of England.

They include huge pelvic and tail vertebrae and have since been analysed by scientists from the University of Southampton.

The remains of what may be the largest predatory dinosaur ever found in Europe have been unearthed on the Isle of Wight. ‘White Rock spinosaurid’ is pictured in an artist’s impression 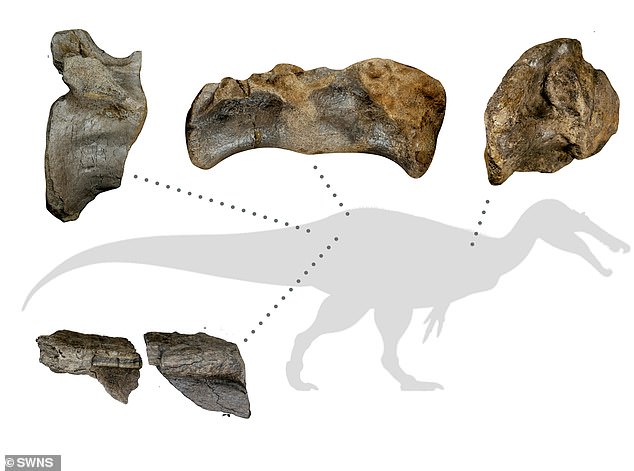 Several prehistoric bones belonging to the ‘White Rock spinosaurid’ – named as such because of the geological layer in which the remains were found – were discovered on the island off the south coast of England. They include huge pelvic and tail vertebrae (pictured)

HOW THE LARGEST KNOWN SPINOSAURID EVEN DWARFED T.REX

Originally found in Egypt, Spinosaurus is the largest known spinosaurid.

It is also thought to be one of the largest carnivorous dinosaurs to exist – probably reaching over 49ft in length.

Spinosaurus (right) faces off against a T-rex in the movie Jurassic Park III. The 50-foot, seven-ton Spinosaurus was the largest known carnivorous dinosaur and lived in North Africa 100 million years ago

Thoughts on its feeding behaviours vary, with some studies suggesting it was an active aquatic predator – chasing fish in the sea.

Other studies claim it was a heron-like shoreline feeder – grabbing fish and small land prey without venturing out to sea to actively pursue fish.

It lived in the Late Cretaceous era – 99 to 93.5 million years ago and lived in what is now North Africa.

There are two known species of Spinosaurus that have been named so far:

The first known Spinosaurus fossils were destroyed by Allied bombing during World War II, which has hampered palaeontologist’s attempts to understand the unusual creatures.

More recently the dinosaur found fame in the 2001 film Jurassic Park III, where it battles and defeats a Tyrannosaurus rex.

‘Judging from some of the dimensions, it appears to represent one of the largest predatory dinosaurs ever found in Europe – maybe even the biggest yet known.

‘It’s a shame it’s only known from a small amount of material, but these are enough to show it was an immense creature.’

The remains were found by dinosaur hunter Nick Chase, who has since died, near Compton Chine, on the south-west coast of the Isle of Wight in the Vectis Formation geological structure, and are now on display in the Dinosaur Isle Museum in Sandown.

Dr Neil Gostling, corresponding author of the study published in the journal PeerJ, said: ‘Unusually, this specimen eroded out of the Vectis Formation, which is notoriously poor in dinosaur fossils.

‘It’s likely to be the youngest spinosaur material yet known from the UK.’

‘Because it’s only known from fragments at the moment, we haven’t given it a formal scientific name,’ Mr Naish added.

‘We hope that additional remains will turn up in time.’

The scientists suggest that marks on the bone including little tunnels bored into a lump of pelvis, show that the body of the giant dinosaur would have been picked over by scavengers and decomposers after it had died.

Co-author Jeremy Lockwood, a PhD student at the University of Portsmouth and Natural History Museum, said: ‘We think they were caused by bone eating larvae of a type of scavenging beetle.

‘It’s an interesting thought that this giant killer wound up becoming a meal for a host of insects.’

The researchers hope to look at microscopic internal properties of the bones in the near future, which may provide information about the dinosaur’s growth rate and possible age.

The largest known spinosaurid is Spinosaurus, which even dwarfed the fearsome T. rex. 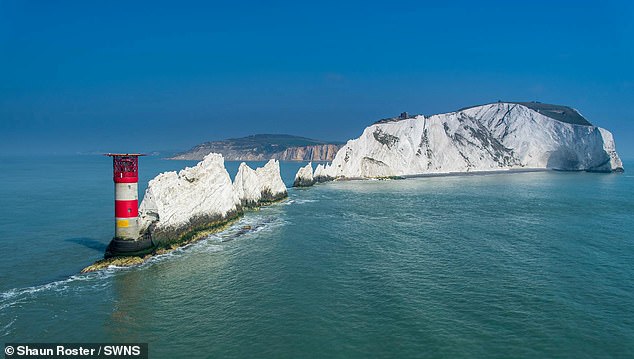 The remains were found near Compton Chine, on the south-west coast of the Isle of Wight in the Vectis Formation geological structure 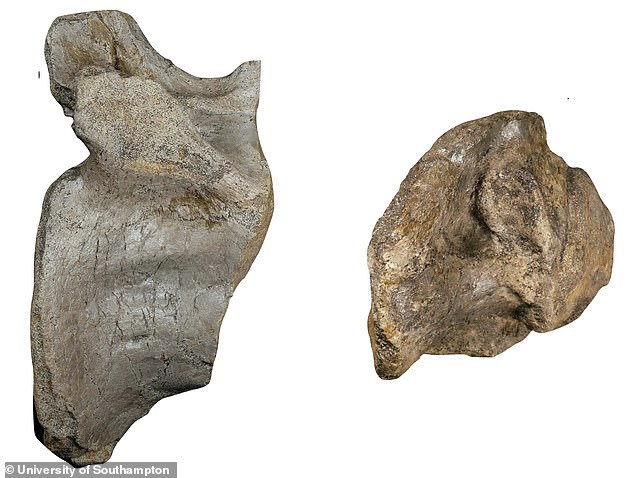 The researchers hope to look at microscopic internal properties of the bones in the near future, which may provide information about the dinosaur’s growth rate and possible age 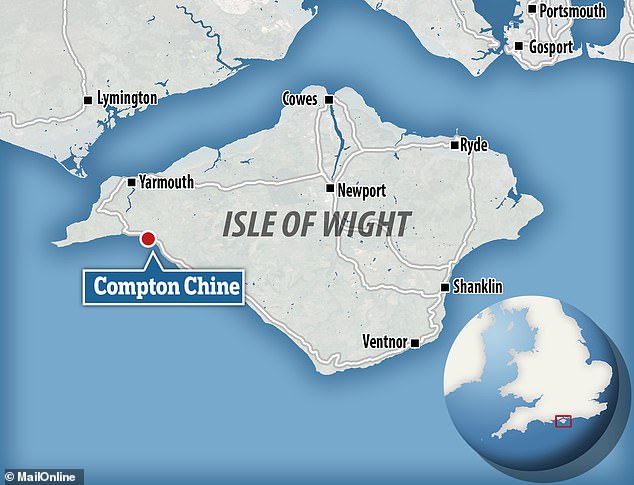 It is hard to guess the behaviour of an animal just from fossils; but based on its skeleton, some scientists have proposed that Spinosaurus could swim, while others think it just waded in the water like a heron.

A new study published in March this year claimed that the dinosaur had dense bones that would likely have allowed it to hunt underwater.

Researchers at the Field Museum in Chicago, Illinois came to their conclusion after studying the density of spinosaurid bones and comparing them to other animals like penguins, hippos, and alligators.

The new discovery has been published in the journal PeerJ Life & Environment. 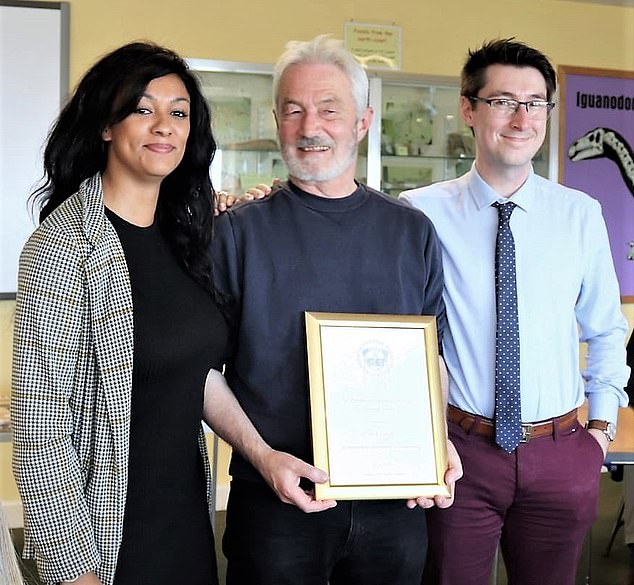 The remains were found by dinosaur hunter Nick Chase (pictured centre), who has since died 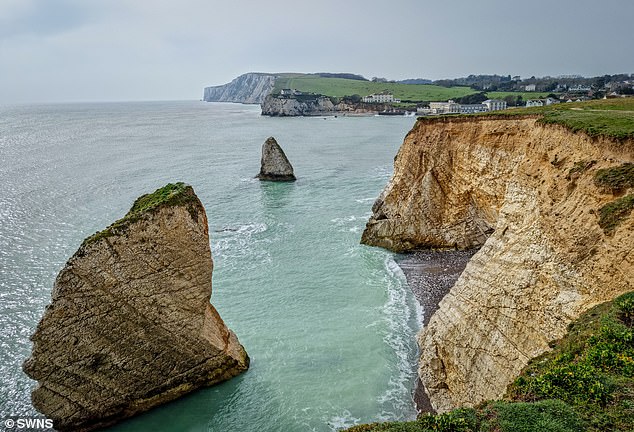 The Cretaceous rocks may be famous for their dinosaurs, but little appreciated is the fact that the island’s fossil record preserves dinosaurs from more than one section of dinosaur history