A neighbour who was caught on camera taking a five-year-old girl from a playground and locking her in her flat has been allowed to live back on the same estate as her victim.

Jennifer Ashley May-Cunningham, 33, offered little Evie Beal a cup of tea at a playground in Chale Green o  Isle of Wight before leading her away and locking her in her flat.

Naomi Haynes, 24, rushed to her daughter’s rescue after her neighbour saw Evie being led away, getting inside the flat with Evie’s father, Daniel Beal.

Jennifer Ashley May-Cunningham, 33, offered Evie a cup of tea before leading her back to her flat and locking her inside 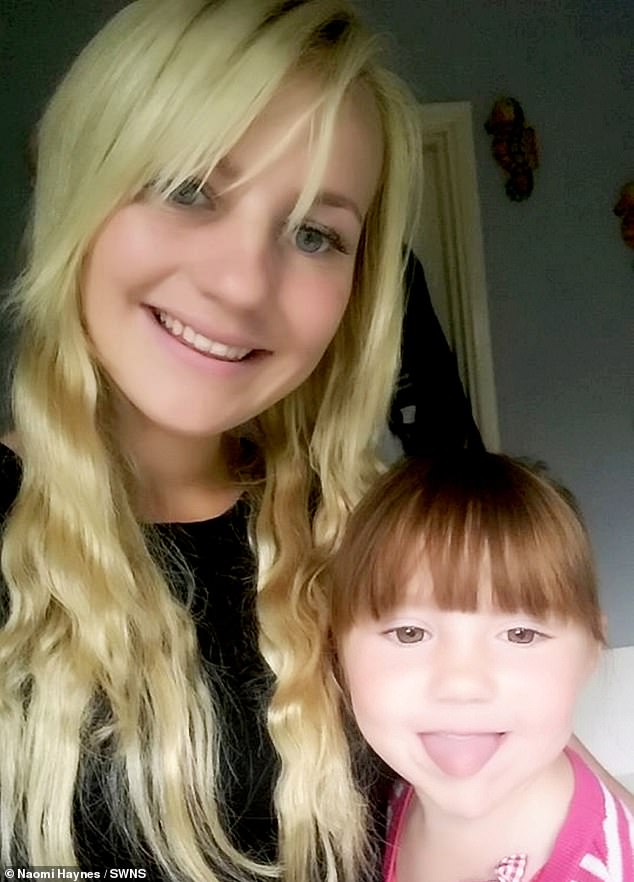 Naomi Haynes with her daughter Evie, five, who was abducated from a playground and locked in a neighbour’s flat on the Isle of Wight in March

After a trial, May-Cunningham was found guilty of detaining a child and keeping them from a person having lawful control at Isle of Wight Magistrates Court, on April 21.

Despite the conviction, she has been allowed to live back on the same estate as Naomi and her family, leaving Evie, who is staying with her grandmother in London during the lockdown,  ‘petrified,’ and ‘hysterical’.

Naomi, a stay-at-home-mother, said: ‘My daughter is fully traumatised.

‘When she heard that Jennifer was back on the estate where we live she fell to the floor, retching.

‘It’s heartbreaking for me as her mum to see her so scared.

‘I’m livid with the local housing authority, they won’t accept responsibility and house her elsewhere.

‘The whole neighbourhood is traumatised too, people are scared to let their kids play out on sunny days. I’ve even had to put my girl in therapy, it’s a disgrace.’ 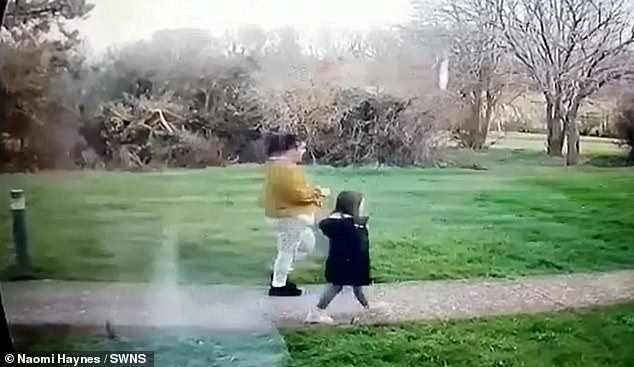 Evie, five, was led away from a playground near her home in the hamlet of Chale Green, Isle of Wight and locked inside Jennifer May-Cunningham’s flat 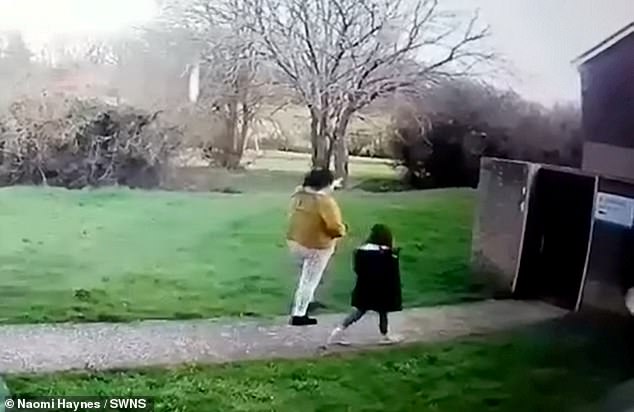 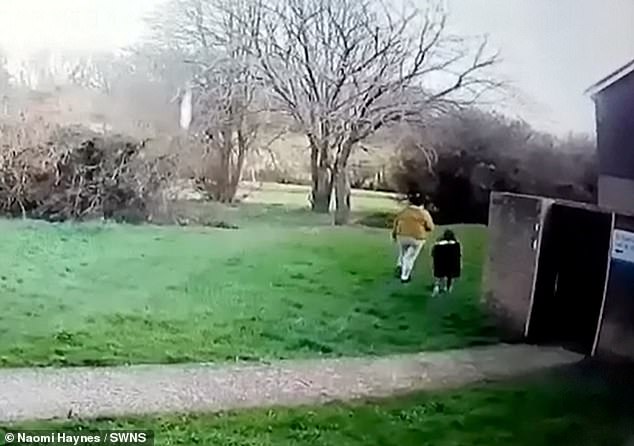 May-Cunningham ‘lashed out’ at police when they arrived at her flat on March 1, she was held in custody for a month before she was convicted of detaining a child, as well as two counts of assaulting a police constable, and use of threatening words or behaviour

On March 1, single Naomi, was doing chores in her flat while ex-partner, Daniel, took their two children to the local park.

Evie was with a friend on her way back from another friend’s house – just yards from home – when Cunningham approached her and invited the five-year-old for a cup of tea.

CCTV captured May-Cunningham leading the girl home, before locking both herself and the child in her own home.

Luckily a neighbour had spotted was watching and immediately alerted parents Daniel and Naomi.

‘My neighbour called me, at first I couldn’t take in what she was saying,” she said.

‘It’s a very close neighbourhood, where the kids have always been safe to walk between each other’s houses, but not anymore.

‘As soon as we realised Evie had been taken we just ran out my front door and down to where Jennifer’s flat is.

‘I was screaming and crying, it was horrible.

‘All the worst things were running through my head. I worried I’d never see my little girl again.

‘I was making myself hysterical imagining what she might be doing to my poor little girl. Eventually we managed to bash the door open just as the police arrived.

‘I grabbed Evie and tried to comfort her, but I’ve never seen her so upset.. She was scared out of her mind. 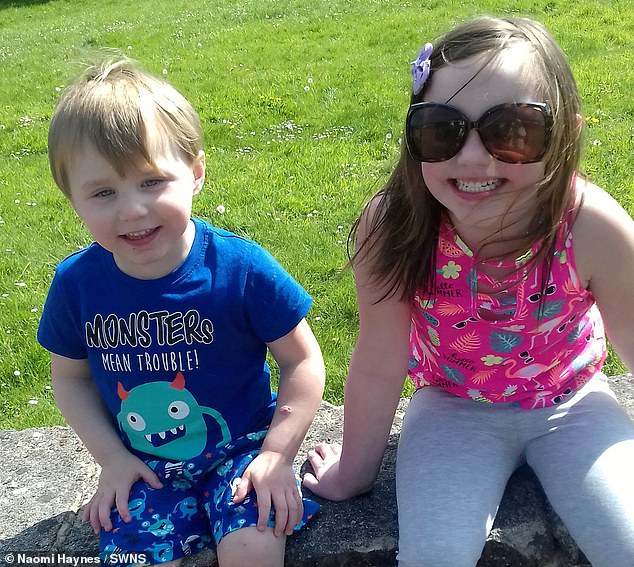 Evie, who is staying in London with her grandmother and little brother Jensen, collapsed after seeing her abductor in the street, her mother claims

‘As the police were trying to arrest Jennifer she really lashed out and was spitting at them all.

‘In the end they had to carry her out of there she was fighting so hard.’

May-Cunningham was released on bail pending a trial, but was recalled to custody on 12th March after breaching the conditions of her bail.

On March 13 she was remanded in custody for one month before a hearing during which she pleaded not guilty.

Just over a month later, on April 21, Isle of Wight Magistrates found her guilty of detaining a child and keeping them from a person having lawful control.

Magistrates gave May-Cunningham a one-month custodial sentence for detaining a child, two counts of assaulting a police constable, and use of threatening words or behaviour. 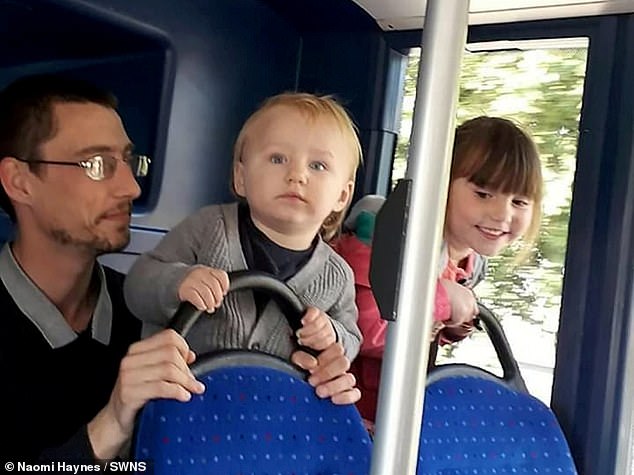 Having already served a month in custody whilst on remand, May-Cunningham was released after the sentencing.

Stay-at-home-mum Naomi said: ‘I got a call from the police to say that she’d been sentenced to a month in prison.

‘I was so relieved that I wouldn’t have to worry about Evie seeing Jennifer for a month at least.

‘But when I got home after going to the shops she was stood there laughing.

‘It was like someone punched me in the stomach.

‘No one had explained that as she’d already done her time she’d be back on the estate – it was such a shock.’

She added: ‘My little girl just couldn’t cope with seeing her again, especially the way she was cackling away at us.

‘As soon as we got home she collapsed on the floor, she was retching and shaking uncontrollably. The kids are now living with their nanny.

‘I’m furious with the housing office for letting her back. It’s as if they don’t really understand the significance of what’s happened – she stole my child.’