Up to 600,000 Israelis will be able to apply for a gun license, after the government changed its policy with the motivation that it could prevent ‘lone wolf attacks’ by Palestinians.

Some 140,000 civilians currently hold a firearms permit, and while officials say they has no intention of creating a ‘United States situation’ in Israel, critics have warned the new policy will stoke violence.

A source in the public security ministry, however, estimated that only 35,000 people will be interested in applying for gun licences under the new regulations.

Israel has eased its gun controls to enable hundreds of thousands more civilians to apply for licences, a move authorities say will help thwart lone-wolf attacks like this one in the West Bank in 2016 in which the attacker was shot and wounded

Public Security Minister Gilad Erdan said the change could help thwart ‘lone-wolf attacks’ by Palestinians, who have carried out gun, knife and car-ramming assaults that have at times been deadly.

A number of people have been shot by accident, however, in the chaos resulting from such attacks, while Israeli security personnel have in some instances been accused of excessive force.

‘Many civilians saved lives during attacks and, in an age of ‘lone-wolf terror’, the more trained civilians carrying arms, the higher the chances of thwarting attacks and minimising casualties,’ Erdan said in a statement.

Under the new regulations, any Israeli who had extensive infantry combat training can apply for a gun licence.

Most Jewish Israelis must complete obligatory military service after they turn 18, but only a minority receive such training. 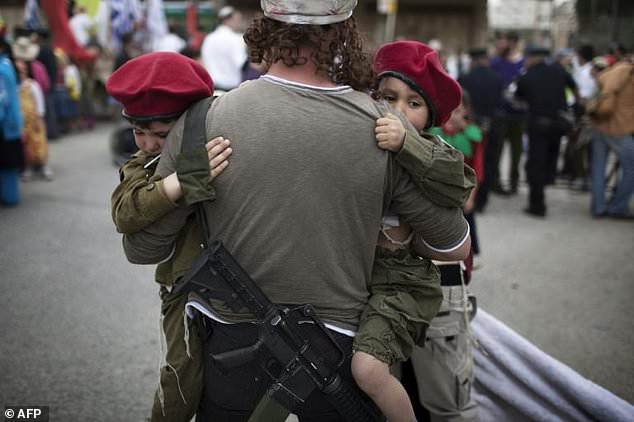 It is already common to see Israeli settlers in West Bank outposts openly carrying rifles, like this one in the settler enclave in central Hebron with his children dressed up in army uniforms for the annual Purim parade

Prior to the change, the main criterion for a permit – besides professions such as hunter or diamond merchant – was one’s place of residence.

Settlers or other Israelis working in the occupied West Bank tend to receive licences. It is common to see Israeli settlers in remote West Bank outposts openly carrying rifles.

The new regulations do not change Israel’s vetting process for gun licences, which, according to Erdan, is ‘one of the strictest.’

‘There’s no intention to reach a situation like in the United States,’ he told public radio on Tuesday.

‘Here we conduct background checks on people’s past, their health, including mental health – you need permits from the health ministry and police.’

Erdan’s move was met with criticism from left-wing politicians who expressed fear an increase in gun ownership could lead to more violence.

Michal Rozin of the Meretz party said the new rules would not diminish the risks of militant attacks but rather ‘significantly increase the risk to the lives of women and children’ in domestic violence cases.

Dov Hanin, a Jewish lawmaker from the mainly Arab Joint List, said that Erdan’s plan would lead to more guns in Arab towns, where unlicensed weapons are already a serious problem.

Arab Israeli leaders accuse police of neglecting Arab towns and allowing crime to flourish in them.