Benjamin Netanyahu has admitted cannot form a right-wing coalition in the wake of Israel’s election, and is now calling for a national unity government instead.

In a video message, the Prime Minister said he had ‘no choice’ but to reach out to rival Benny Gantz to try and form an alliance after the election ended with both their parties tied and neither having a clear path to government.

Gantz has already called for the formation of a ‘broad unity government’, though negotiations could prove difficult and Netanyahu’s future as Israel’s longest-serving prime minister is still far from certain.

It is unclear if Gantz would accept a government with Netanyahu, who faces possible corruption charges in the weeks ahead, remaining as prime minister.

Benjamin Netanyahu has said he is willing to form a unity government with rival Benny Gantz after their parties ended up tied in Israel’s election, meaning neither can form a majority

In his video message, posted on Twitter, Netanyahu said: ‘During the elections I called for the establishment of the right-wing government, but unfortunately the results of the elections show that this is not possible.

‘The people did not decide between the two blocs. Therefore, there is no choice but to form a broad unity government.’

The latest vote tally shows Netanyahu’s Likud party has 31 seats to Gantz’s  32, with 90 per cent of results counted.

Neither is able to form a working coalition with likely allies in the 120-seat Knesset, but would be able to command a slim majority by working together.

Both men could also call on the support of Yisrael Beitenu and its leader Avigdor Lieberman who has already said he would be willing to join a unity coalition.

Netanyahu is desperate to cling to power as he faces possible corruption charges which could make him the first sitting Israeli PM to stand trial.

Israel’s attorney general has recommended indicting Netanyahu on bribery and corruption charges in a series of scandals, pending a hearing next month. 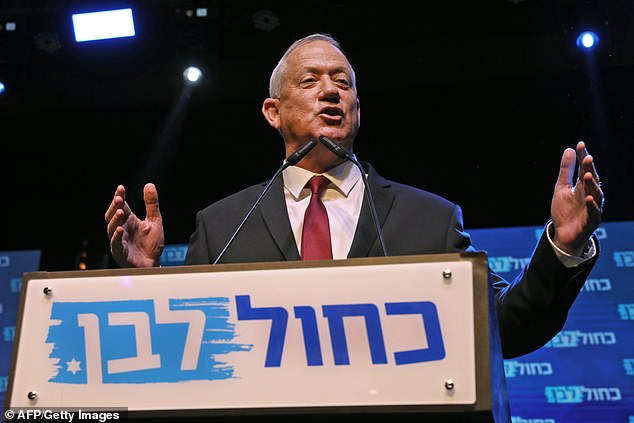 Gantz has already said he is willing to form a unity coalition, but it is unclear if he will accept Netanyahu saying on as Prime Minister, leaving his political future hanging by a thread

If he stays in power, his right-wing allies could agree to give him parliamentary immunity, but that now appears unlikely.

Some analysts have suggested a deal may be agreed in which Netanyahu steps down from public office for good in return for reduced charges.

Many Israelis have also grown weary of Netanyahu’s wife, Sara, and their oldest son, Yair, who have gained a reputation of behaving more like a royal family than public servants.

The election was the second in five months for Israel.

President Reuven Rivlin, who must appoint someone to attempt to form the next government, said there was a ‘need to avoid a third’.

Netanyahu suffered one of the biggest defeats of his political career after the previous elections in April.

His Likud along with its right-wing and religious allies won a majority, but he failed to form a coalition and opted for a second election rather than risk having Rivlin choose someone else to try.