Israel election: Netanyahu fights to hold on as Prime Minister

Benjamin Netanyahu is facing an uphill battle to keep his job after his party lost seats in Israel’s election, leaving him deadlocked with his biggest political rival.

According to partial results, Netanyahu’s Likud party and rival Benny Gantz’s Blue and White party were tied on 32 seats each in the 120-seat Knesset.

If that result proves final then it would reduce Netanyahu’s right-wing coalition government to 56 seats overall – five short of a majority – raising the prospect of an end to his record-breaking rule.

But Netanyahu, who is facing a corruption probe which would intensify if he was forced from power, refused to concede on Wednesday morning.

Instead, he vowed to work to form a new government that excludes Arab parties.

Israeli Prime Minister Benjamin Netanyahu was battling to keep his job on Wednesday morning after his Likud party lost seats in Israel’s election, putting him on par with his biggest rival 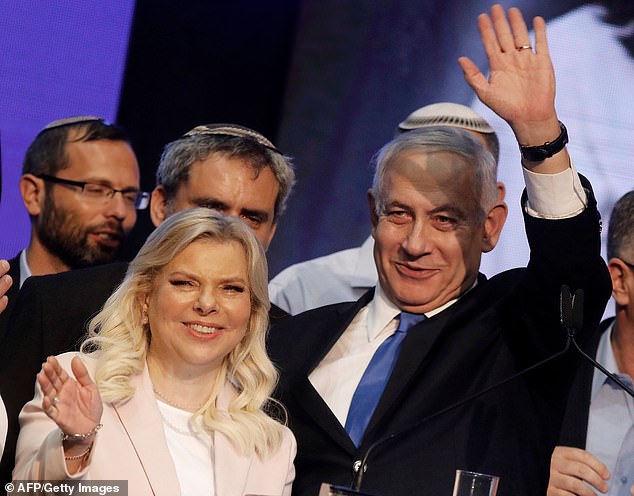 Mr Netanyahu, Israel’s longest-serving PM, appeared on stage alongside wife Sara at a rally late last night where he refused to concede defeat as results rolled in 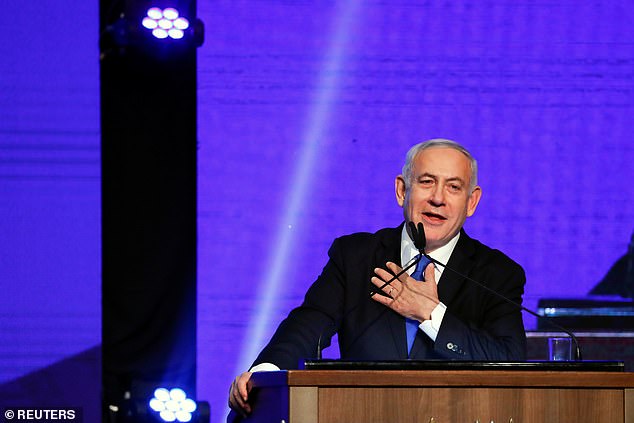 In a speech to the party faithful, Mr Netanyahu vowed to form a Zionist government that locked out Arab Israeli parties, but his ability to fulfil this promise looked doubtful

His campaign focused heavily on attacking and questioning the loyalty of the country’s Arab minority – a strategy that drew accusations of racism and incitement from Arab leaders.

He claimed that Arab parties ‘negate the existence of Israel as a Jewish and democratic state’ and ‘glorify bloodthirsty murderers.’

Meanwhile Avigdor Lieberman, leader of Yisrael Beiteinu, emerged as likely king-maker and called for a secular unity government between Likud and Blue and White.

Without Lieberman’s endorsement, both parties appear to have fallen well short of securing a parliamentary majority.

However, a coalition is far from guaranteed – Liberman has previously refused to join Netanyahu’s right-wing coalition because of its reliance on Ultra-Orthodox Jewish parties, while Gantz has said he would not support Netanyahu while he is facing corruption allegations.

Netanyahu’s competitor, Benny Gantz of the Blue and White Party, said that he ‘will fight to create a national unity government.’

Early Wednesday, Gantz told a cheering rally of supporters that while it was too soon to declare victory, he had begun speaking to potential partners and hoped to form a unity government. 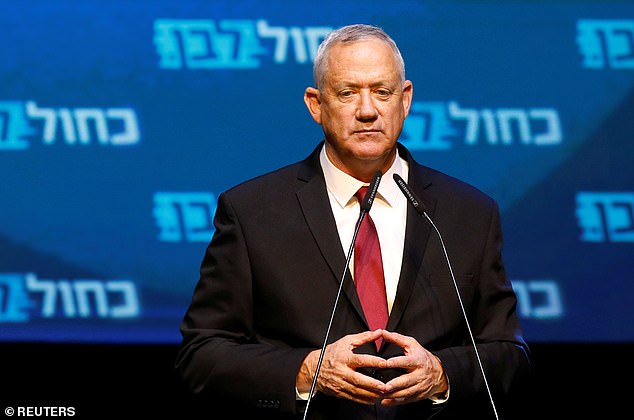 Meanwhile Benny Gantz, leader of the Blue and White party, vowed to work with all leaders in order to try and form a government, having previously vowed not to work with Netanyahu 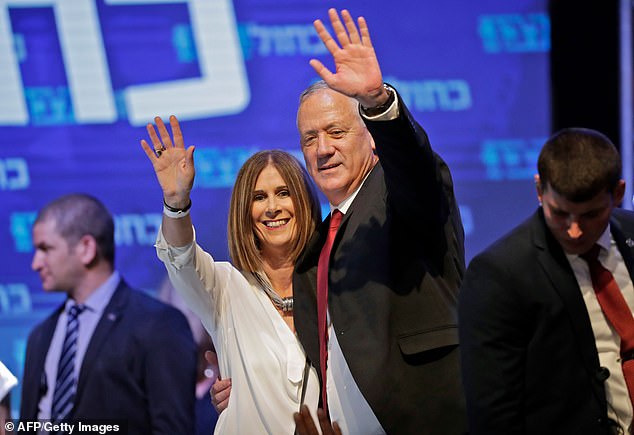 Partial results in Israel’s election showed Gantz’s party tied with Netanyahu’s on 32 seats, with neither having a clear path to a majority coalition

‘Starting tonight we will work to form a broad unity government that will express the will of the people,’ he said.

Attention will now focus on Israel’s president, Reuven Rivlin, who is to choose the candidate he believes has the best chance of forming a stable coalition. Rivlin is to consult with all parties in the coming days before making his decision.

And if that doesn’t work, new elections would be triggered yet again. Rivlin has said he will do everything possible to avoid such a scenario.

Mr Netanyahu called yesterday’s snap election after failing to form a governing coalition following an election in April, which had left both parties with 35 seats in the 120-seat Knesset.

If the challenger Blue and White, led by former military chief Benny Gantz, is now the biggest party it may hold the winning card in attempts to form a coalition government with Israel’s myriad smaller parties.

‘We proved and I promise that starting tonight, regardless of the results, the beginning of the campaign to heal Israel society has started.’

Negotiations on both sides will start as soon as the preliminary results come this morning. 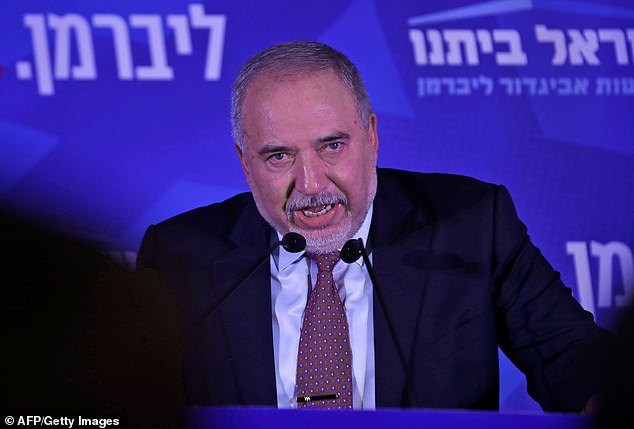 Avigdor Lieberman, leader of the secular nationalist Yisrael Beiteinu party, has emerged as a likely king-maker and called for a broad, secular government made up of both parties

Though it will be a toss up of who can negotiate hardest as soon as these results are in, Avigdor Lieberman, the leader of Yisrael Beitenu, is likely to be the primary target for both men in hopes of forming a coalition.

Lieberman had turned down Netanyahu’s offer of defense minister in his government, forcing the need for an unprecedented repeat election in April.

Lieberman refused to join the new coalition in April because of what he said was the excessive influence it granted to ultra-Orthodox Jewish parties.

But if the exit polls are correct it could spell the end of office for the country’s longest-serving prime minister.

He had declared victory after the April poll and appeared on course to secure a governing majority with the backing of Right-wing and religious parties but talks collapsed after several chaotic weeks of recriminations.

In this month’s election campaign he made even more strident appeals to the Right, vowing to apply ‘Israeli sovereignty’ in the Jordan Valley.

This effectively amounts to a promise to annex 30 per cent of the occupied West Bank, which Palestinians claim as their territory.