Clucthing his copy of the Bible, he could be any devout Christian heading to church to pray on a Sunday.

But as Israel Folau walked to his local service in Sydney on Sunday, he had plenty on his mind.

The controversial rugby star may have been smiling and looking relaxed on Sunday, but on Saturday he will learn his fate for social media posts stating his belief that will gays ‘deserve to go to hell’.

Folau has been in hiding and faces the sack after being issued with a ‘high-level’ breach notice over the posts he made on Twitter and Instagram on April 10.

Israel Folau was ready for church on Sunday. The 30-year-old was spotted with bible in hand as he headed to the service 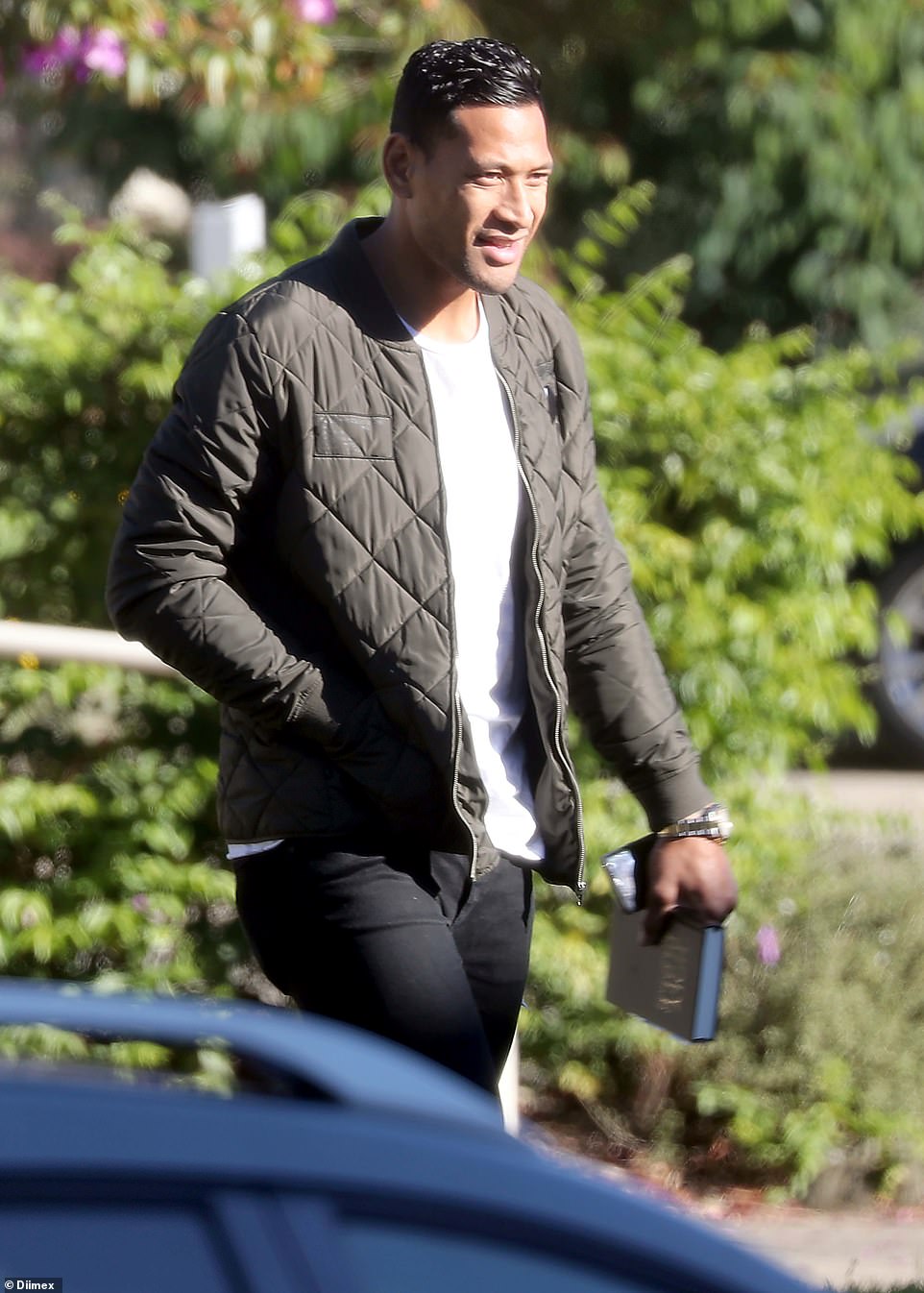 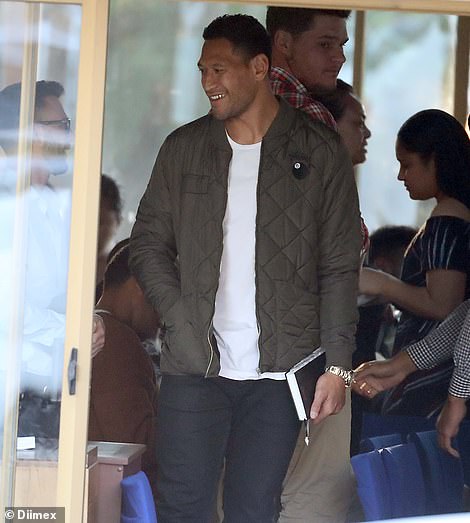 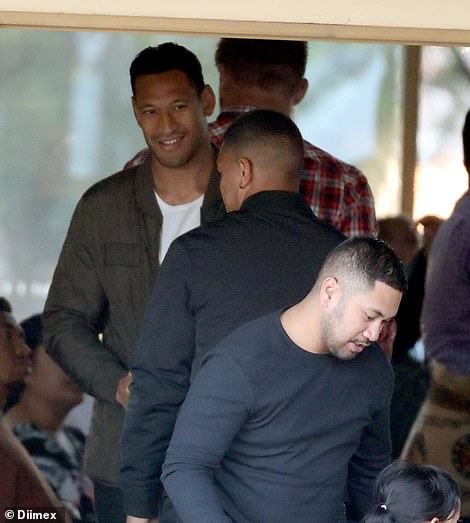 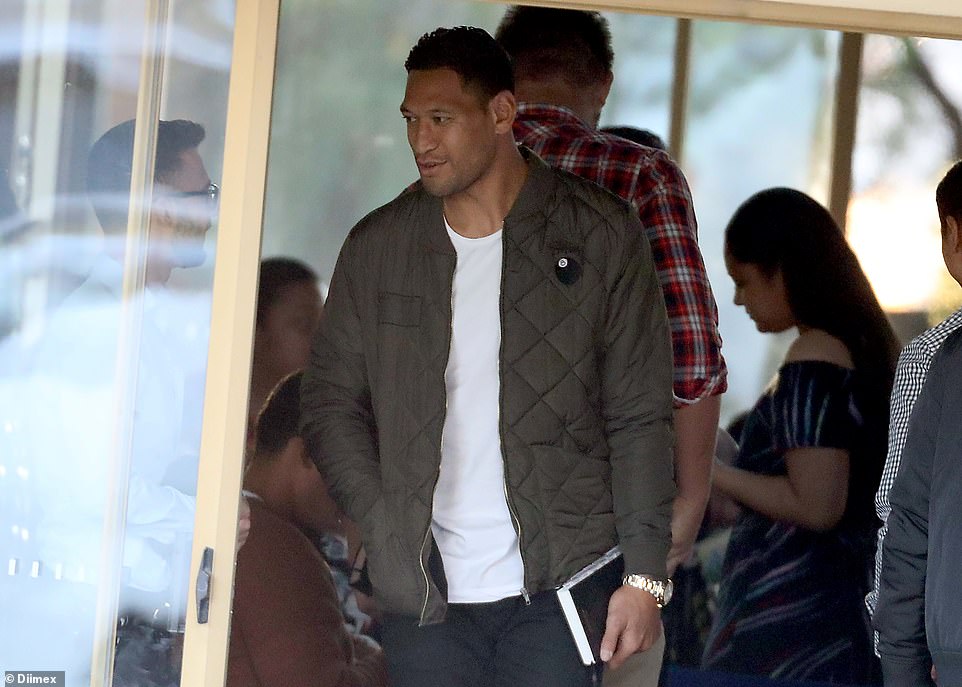 Folau’s judgement is drawing near, with his code of conduct hearing set for May 4. Folau faces the sack after being issued with a ‘high-level’ breach notice over the posts he made on Twitter and Instagram on April 10 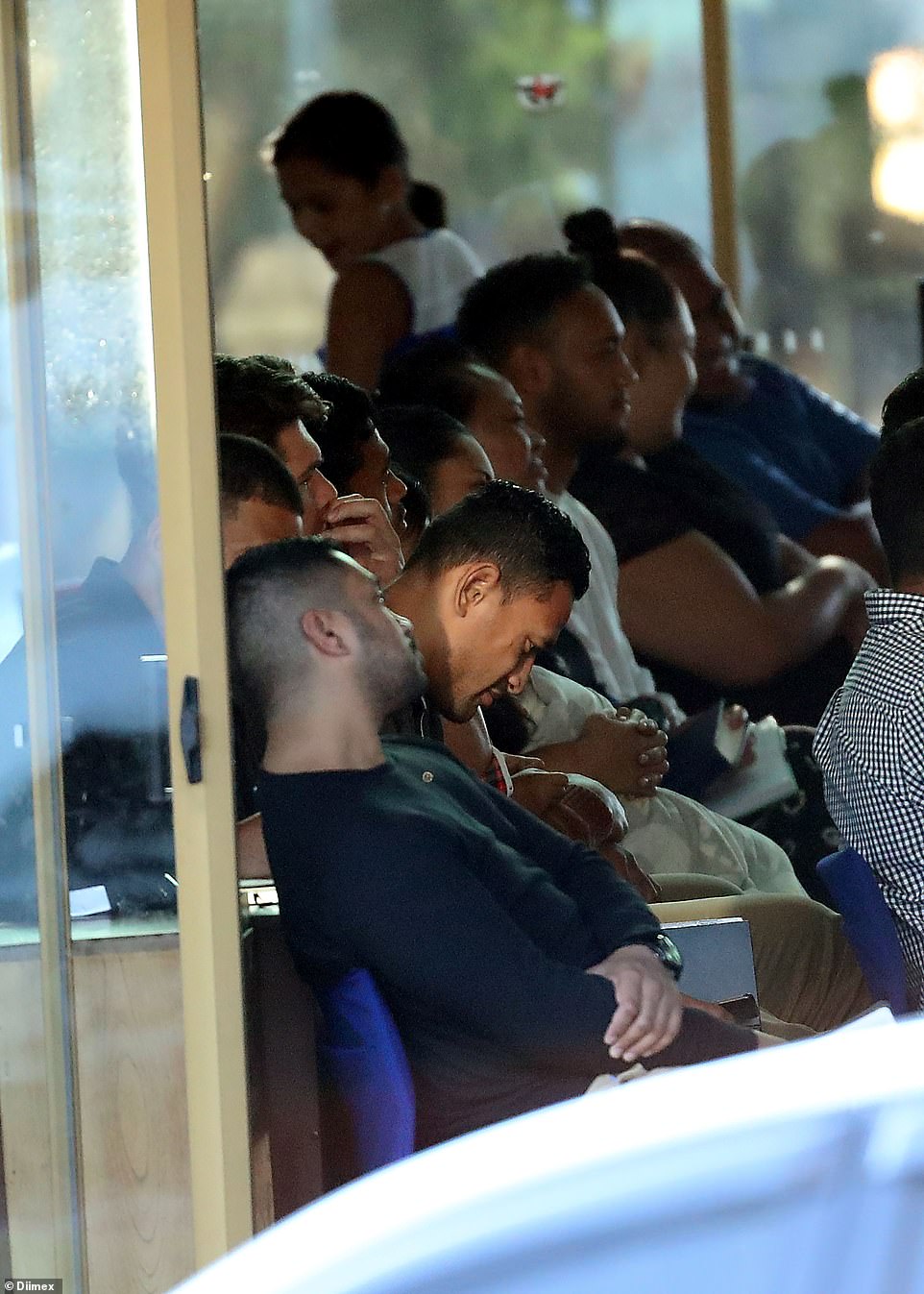 The devout Christian had shared similar sentiments in the past and was previously warned not to do so by Rugby Australia boss Raelene Castle.

In February, Folau signed a multi-million dollar contract extension with the New South Wales Waratahs and Rugby Australia until the end of 2022.

In April 2018, Folau said gay people deserved to go to ‘HELL… unless they repent of their sins and turn to God’.

Folau made the comment on Instagram in reply to a question about God’s plan for gay people. 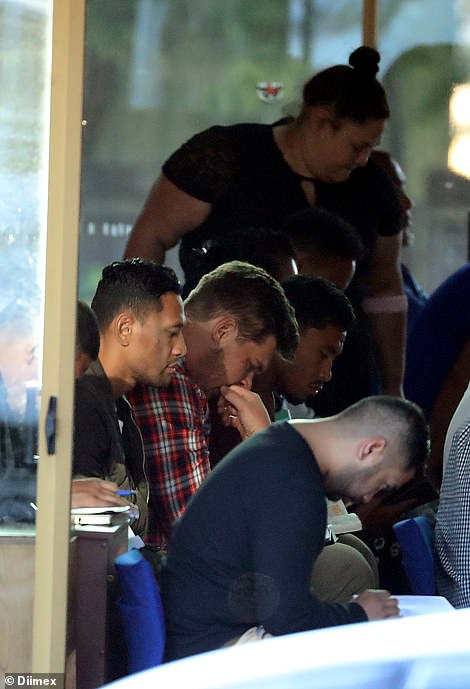 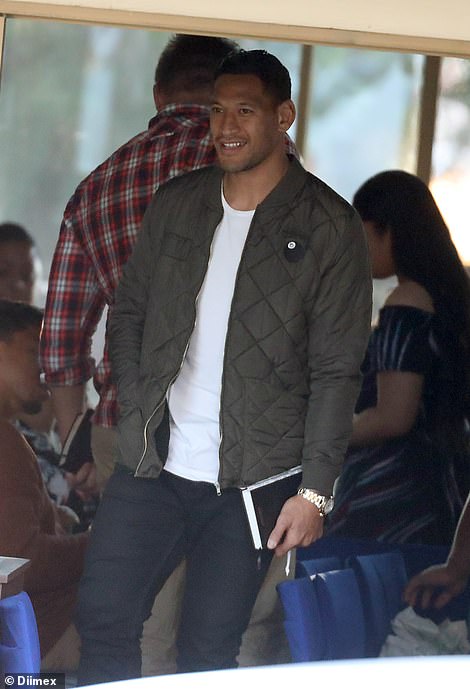 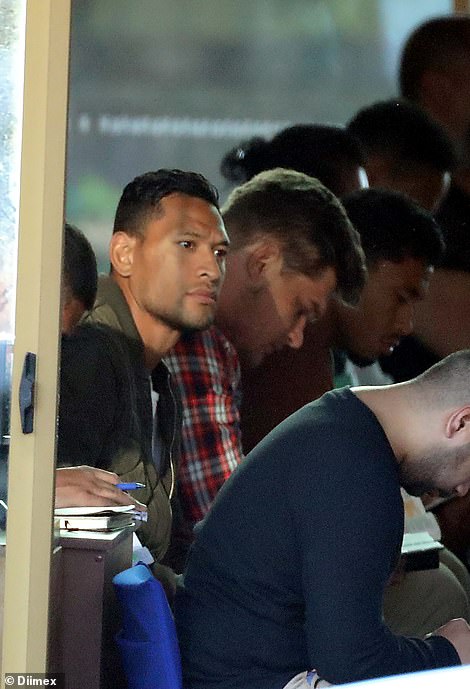 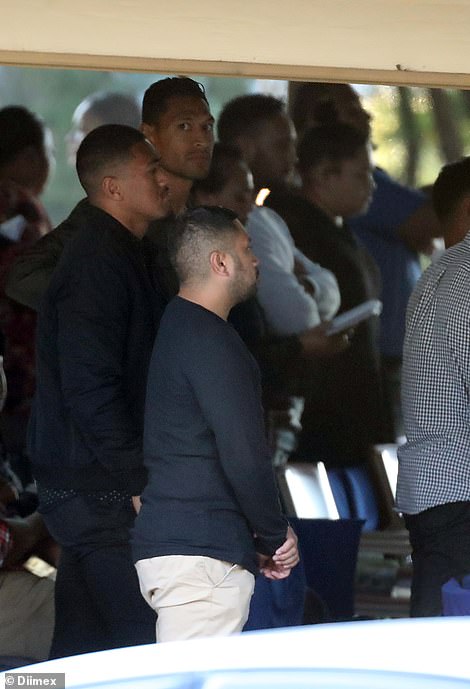 Widely considered as one of the game’s best players, Folau faces the sack over his controversial social media posts 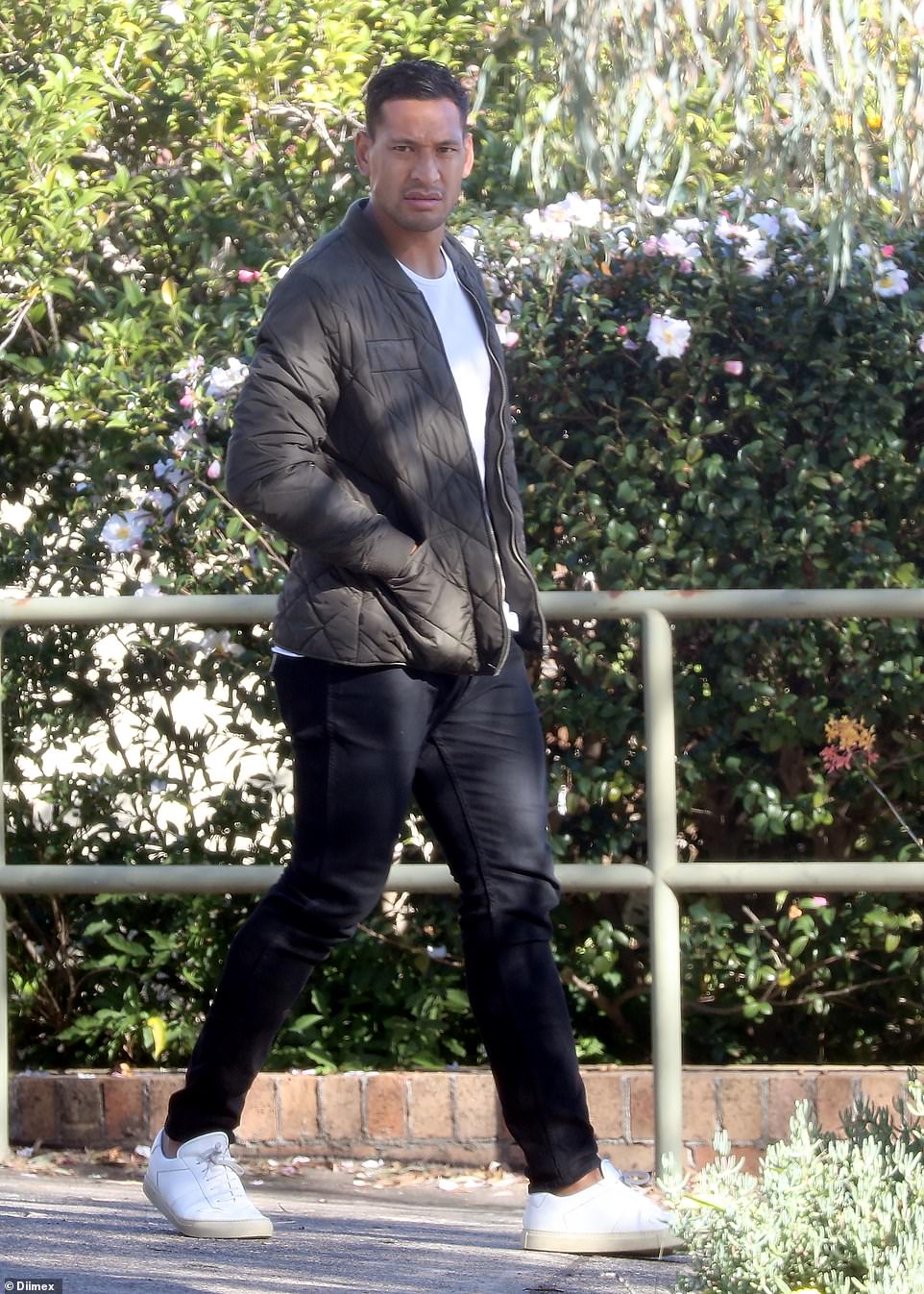 The Wallabies superstar dressed in white sneakers, black jeans and a green jacket as he left the service on Sunday

He made headlines in April last year when he threatened to walk away from the game all together rather than back down on his religious beliefs.

During 2017’s same sex-marriage vote, Folau tweeted that he would not be supporting any change to the existing law.

‘I love and respect all people for who they are and their opinions, but personally, I will not support gay marriage,’ he said.

The Wallabies superstar has been charged with a high-level code of conduct breach and will front a three-person panel at Rugby Australia HQ in Sydney next month. 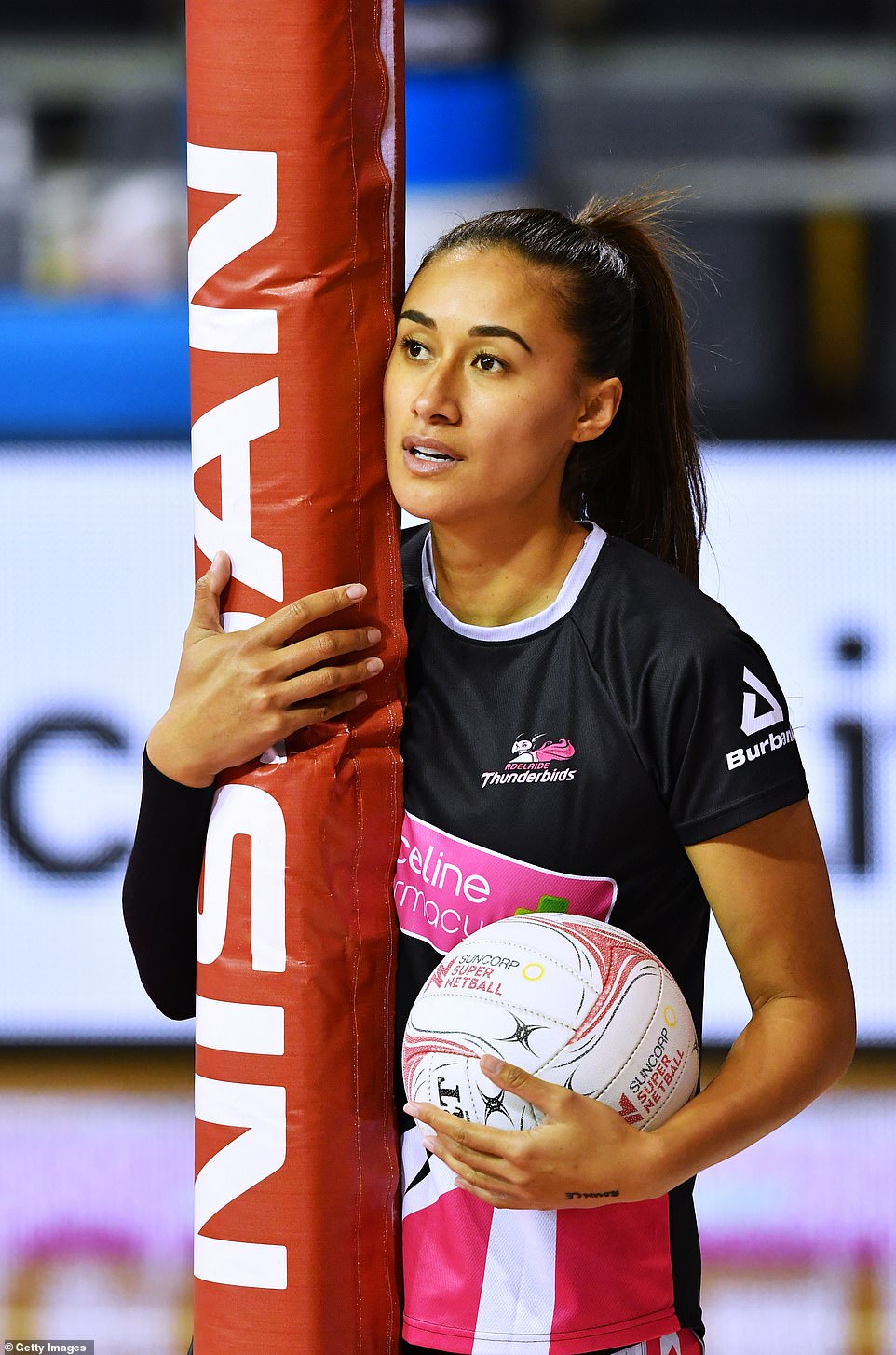 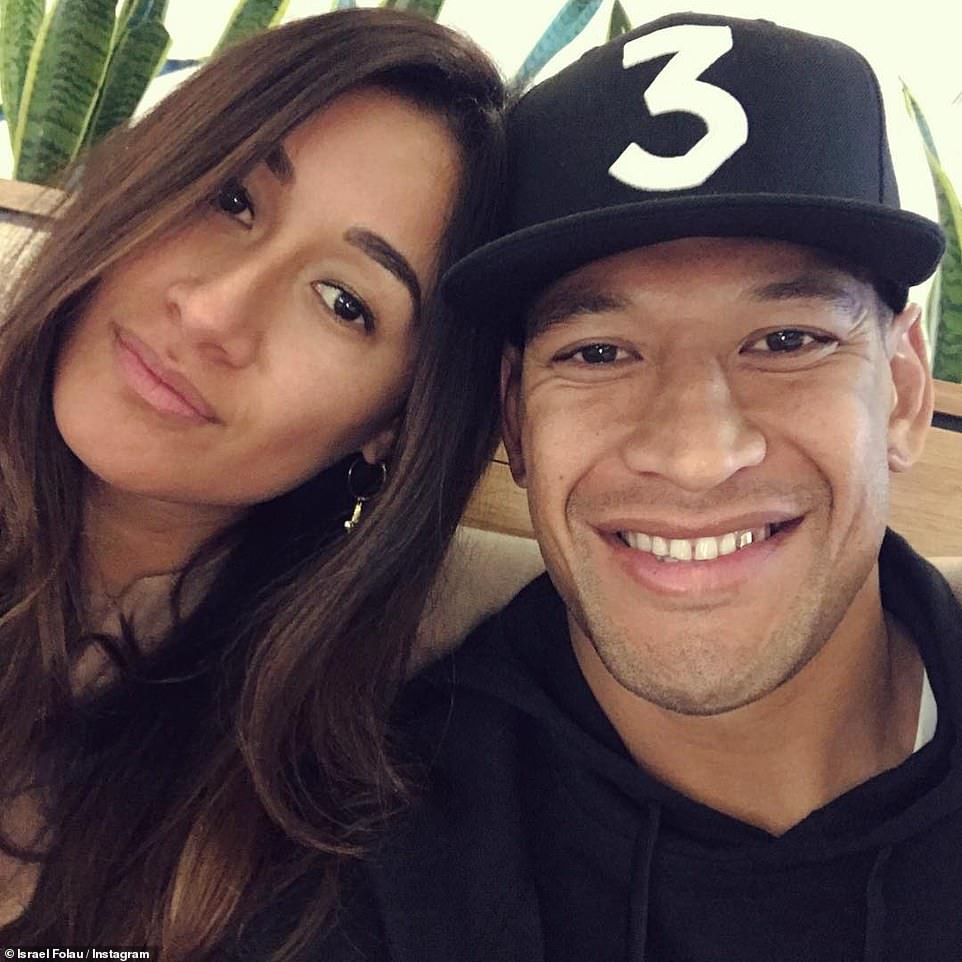 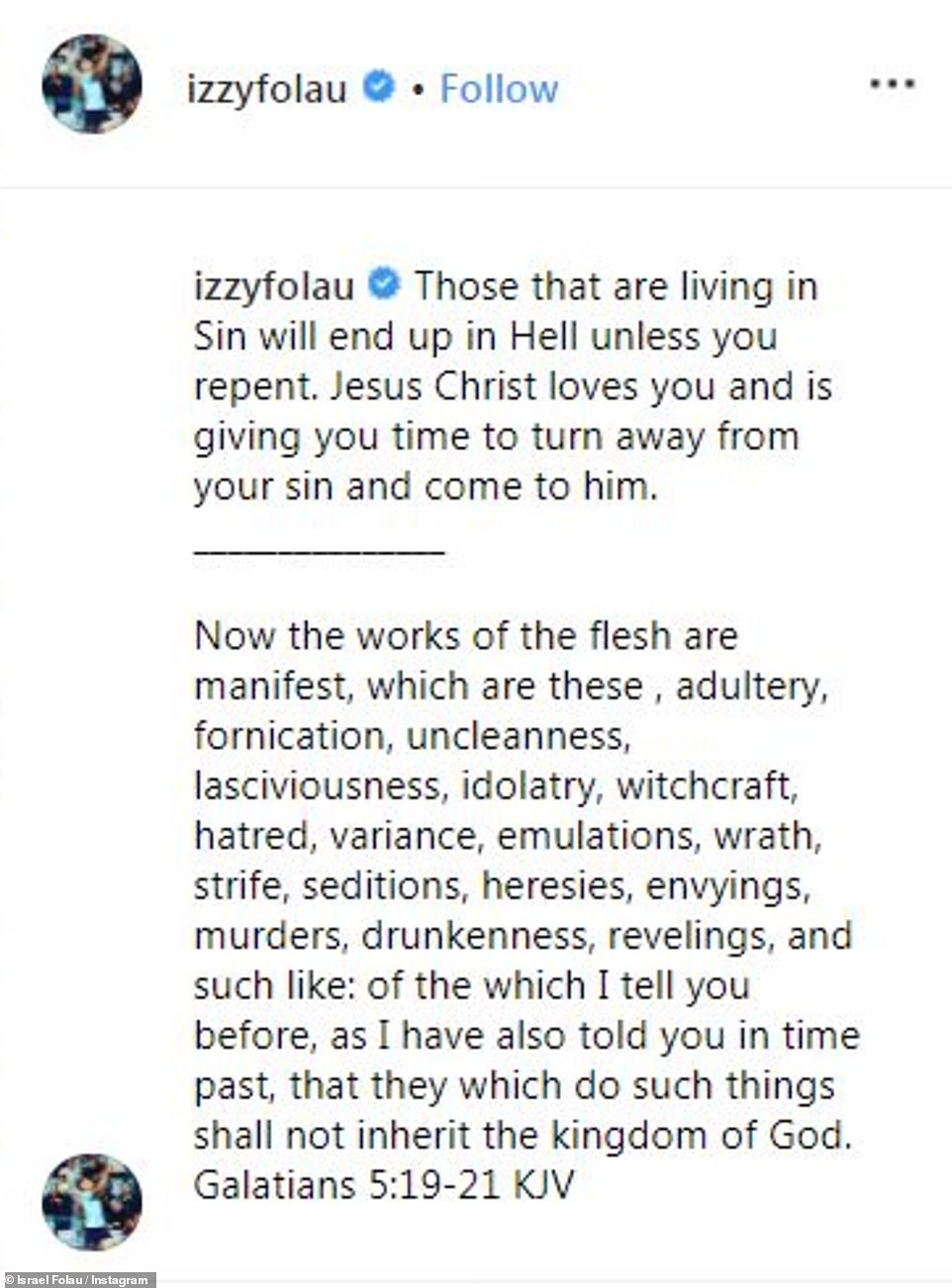 The devout Christian has shared similar sentiments in the past and was warned by Rugby Australia boss Raelene Castle. Pictured: Folau’s post on Wednesday

The RA Integrity Unit deemed Folau had committed a high-level breach of the Professional Players’ Code of Conduct, warranting termination of his employment contract.

Folau was given 48 hours to accept that sanction or have the matter referred to a code of conduct hearing. He opted for the latter. 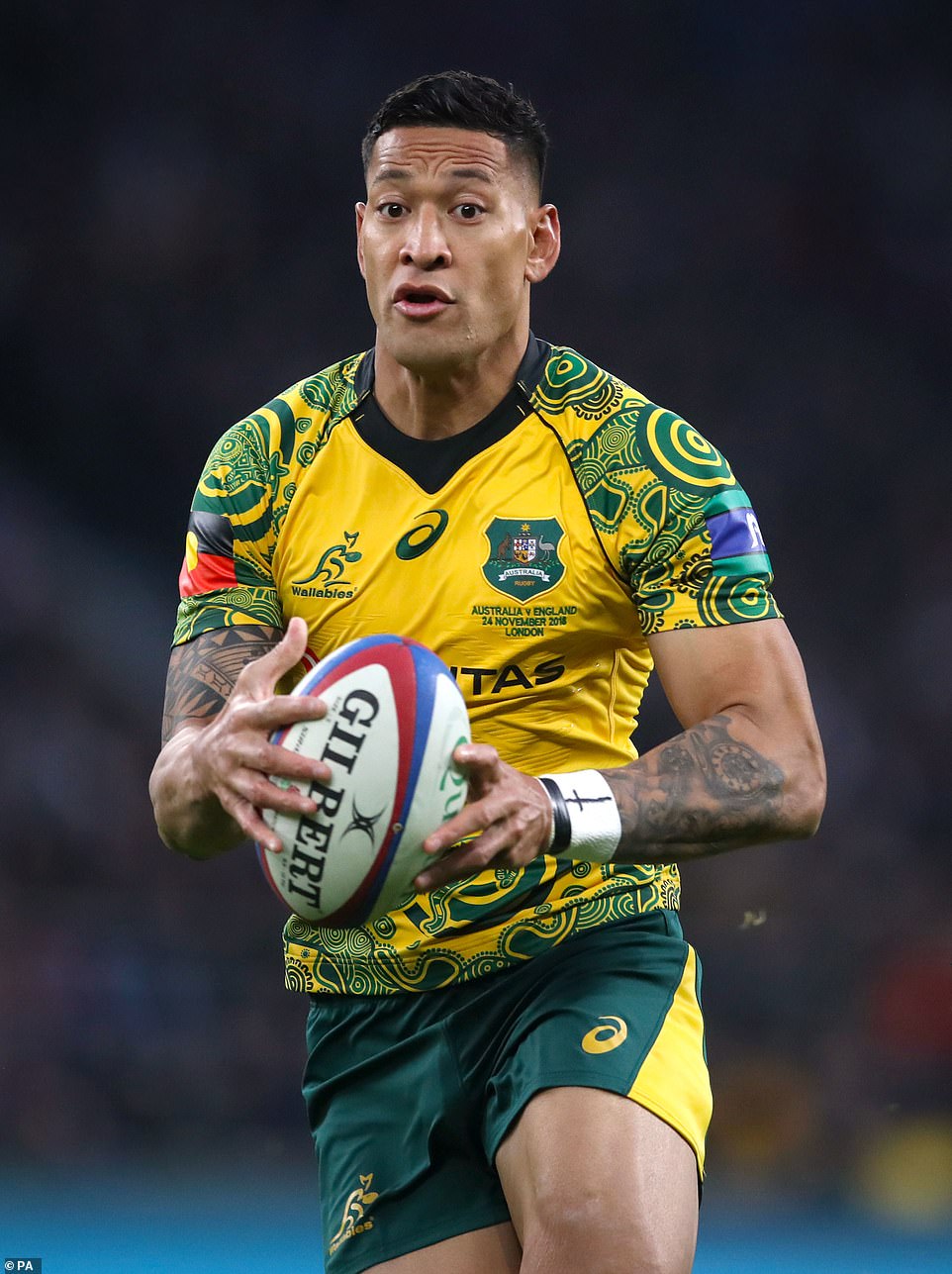 There’s no guarantee the outcome of the hearing will be the final chapter of the saga, as the loser could consider court action.

Folau was stood down by the NSW Rugby Union on April 12.

He was raised as a Mormon and switched to the Australian Christian Churches with his family in 2011.

Surprisingly, Folau was once the poster boy for the world’s leading gay rugby tournament, the Bingham Cup.

Folau and teammate Ashley-cooper also posed for a cover photo in 2014 for the Star Observer – a magazine for the lesbian, gay bisexual transgender and intersex communities.

The unusual life of Israel Folau: Rugby star gave his $500k salary to his parents and descended into ‘alcohol, women and sins’ before finding faith and joining his wife in ‘Team Jesus’

Outspoken footballer Israel Folau caught the nation’s attention in 2017 when he said, quite politely, that he would not be voting for same sex marriage in the postal vote.

The young Polynesian man rose to fame as a talented rugby league player from Brisbane, only to hand over his entire salary to his mum and dad, lose his religion and find it all over again.

Folau’s family is deeply involved in The Truth of Jesus Christ Church in Kenthurst, in Sydney’s north west.

His father, Eni, is a top priest, with videos showing he largely preaches there in his native language of Tongan.

Family, and the respect of his father, are very important to Folau.

At the typically selfish age of 21, Folau surrendered his eye-popping $500,000 Brisbane Broncos pay packet to his parents.

Further money was tithed from his income to the Mormon Church of Latter Day Saints.

In return, he was paid a small allowance, and allowed a prepaid mobile phone.

Folau may have adopted Old Testament rhetoric in his social media posts over the last year, but he hasn’t always been so devout.

He confessed in a Player’s Voice post that the family’s departure from the Mormon Church in 2009 ‘left a huge void in my life’.

‘I tried to fill it with other things. Alcohol. Women. Sins.’

Folau said playing top-level NRL from a young age ‘opened me to a world of temptation I had never been exposed to before.

‘I had the means to indulge in that, but not the wisdom to understand what it really met’.

It was when the family joined a new church that he truly embraced his faith, having ‘experienced God’s love for the first time’.

‘I have tried to live my life in God’s footsteps ever since,’ he wrote.