The 30-year-old dual-code international, who has not played since being sacked by Rugby Australia for making homophobic comments on social media, has signed a one-year contract with the Super League club.

Dragons chairman Bernard Guasch said: ‘We want to give Israel a new opportunity to shine on the pitch.’

Folau, who played for Melbourne and Brisbane before switching codes, was told he would not be allowed to return to the NRL but the Rugby Football League has confirmed it will not prevent his registration with the Dragons.

A statement said: ‘This is a difficult decision, as the RFL places a high value on the sport’s reputation in prioritising inclusion and diversity – and deplores the player’s previous comments.

‘However the moral responsibility for deciding whether to sign a player sits with individual clubs.

‘The player has not been charged or found guilty of any criminal offence. 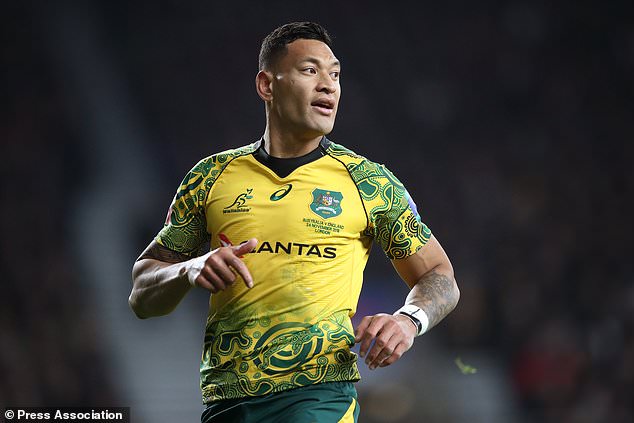 ‘However distasteful his previous comments, we don’t believe that, under our current regulatory framework, these can prevent his participation in the sport.’

Folau said: ‘I acknowledge the views expressed by Super League and the Rugby Football League.

‘I’m a proud Christian, my beliefs are personal, my intention is not to hurt anyone and I will not be making further public comment about them.

‘I look forward to my return to the great game of rugby league with the Catalans Dragons.’

Wigan Warriors announced it would hold its Pride Day celebrations when the club played the Catalans on March 22.

‘Here at Wigan Warriors we are committed to the core values of inclusion and respect,’ the club’s executive director Kris Radlinski said in a statement.

‘Our community foundation have a long history of supporting local LGBTQ+ groups and initiatives, and we want everyone who engages with our game to feel welcome, valued and most of all, respected.

‘Rugby League has a strong history of inclusion, of breaking down barriers and of being a forward-thinking sport. I think that today more than any day that it is vitally important we reiterate that message. We’re looking forward to working with charities, local and hopefully national groups, to make this day a success.’

‘Our great game is tasked with fighting against homophobia and standing up for the values it puts such high stock in,’ he said.

‘It shows none of the bravery, cameraderie or integrity @rfl expects from its players, staff and fans.’