Hamas have claimed Israel are sending bugged shoes to spy on people in a war-torn part of the country.

The militant group, who control much of the Gaza Strip, found ‘secret electronic chips’ sewn inside the soles of shoes.

They claim that an unknown number of the suspicious items were on their way to market in a nearby town.

Bugged boots: Hamas claim to find recording chips sewn into soles of shoes sent from Israel that were stopped at a major Gaza border

Faction members of political group Fatah said they stopped the boots coming through the Kerem Shalom Crossing at Gaza’s southern border with Israel.

They sent the boots to Hamas for examination who claim that they contain recording devices.

Some Palestinian online news sources claimed Hamas said Israel was behind the shipment and was trying to spy on members of the ‘Palestinian resistance’.

Khaled Abu Toameh, a writer for the Jerusalem Post, posted photos of the boots.

In a tweet he said: ‘Hamas: Israel sent us shoes equipped with secret electronic tracking chips to spy on us’. 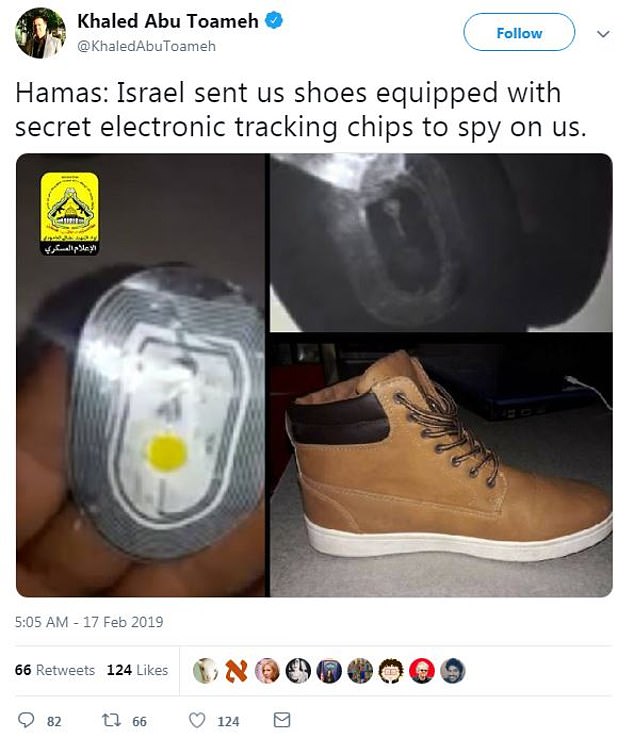 Hamas took control of the major goods crossing from the Palestinian Authority on Sunday, according to the Gaza strip’s interior ministry.

Hamas seized the Gaza Strip in 2007 in a near civil war with Palestinian president Mahmud Abbas’ Fatah party.

Tensions have risen again since March as Palestinians have gathered at least weekly along the border with Israel for often-violent protests, calling for an end to Israel’s blockade of the territory.

The Israeli Government and Embassy have been contacted for comment on the claim.