A doctor in Israel has been diagnosed with Covid-19 twice, months apart and after testing negative in between the two swabs, according to local media.

The medic, who had been working at Sheba Medical Center in the city of Ramat Gan, four miles east of Tel Aviv, reportedly recovered from her first bout of coronavirus.

She had tested positive in April but recovered from the illness, which has infected around 55,000 in Israel, and then tested negative twice in May and June.

But this month, after coming into contact with an infected patient, the unnamed doctor has tested positive for Covid-19 again.

The case is one of a number of possible ‘reinfections’ that raise questions about the immunity people develop after catching the coronavirus, and whether people can get it more than once.

So far, there have been no scientifically proven cases of someone catching it twice, with experts tending to blame inaccurate test results or lengthy illness. Some say it is not uncommon for parts of viruses to keep circulating even after recovery.

The doctor had been working at Israel’s biggest hospital, the Sheba Medical Center in Ramat Gan (Pictured). There is no suggestion the medics photographed are involved in the story

The female doctor reportedly tested positive for the coronavirus again after she had been in contact with an infected patient, The Times of Israel reported.

The report, initially from the country’s Channel 13 television news, implies she was reinfected with the virus despite having recovered from it already.

Traditional understanding of viruses suggests that people who have had Covid-19 already should develop a level of immunity that is at least temporary.

But cases such as this one call the idea of natural protection into question.

A patient at the hospital had reportedly experienced the same phenomenon recently.

As well as concerns about reinfection, there are also signs that people may simply remain ill for a long time with the virus still circulating in their bodies.

Professor Gabriel Izbicki, from Jerusalem’s Shaare Zedek Medical Center, said it was ‘frightening’ how long people were suffering with the disease.

He told the Times of Israel: ‘More than half the patients, weeks after testing negative, are still symptomatic’. 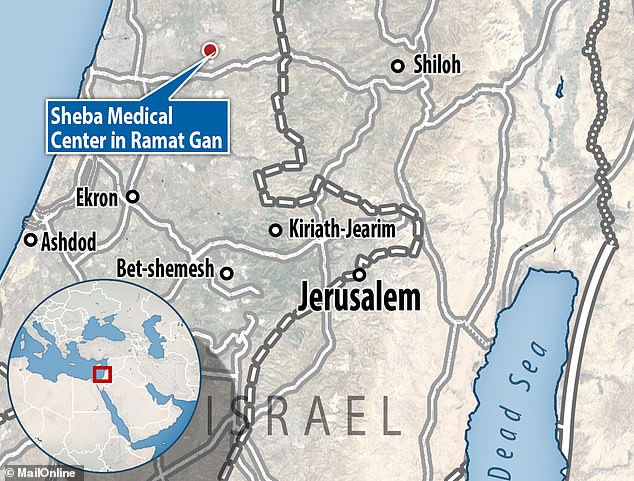 The case is one of a number that appear to show people getting diagnosed with the coronavirus more than once.

A scientific paper entitled ‘A case report of possible novel coronavirus 2019 reinfection’ was published in the US recently describing the case of an 82-year-old man who was hospitalised twice by the virus.

THE MYSTERY OF COVID-19 IMMUNITY

Scientists still do not know for sure whether people can catch Covid-19 more than once or if they become immune after their first infection.

With some illnesses such as chickenpox, the body can remember exactly how to destroy it and becomes able to fend it off before symptoms start if it gets back into the body.

But it is so far unclear if people who have had coronavirus can get it again.

Tests have shown that many people who recover have antibodies – which can produce future immunity – but it is not known whether there are enough of them.

One doctor, Professor Karol Sikora, said he had found that only 10 per cent of people known to have had Covid-19 actually developed antibodies.

This means it is hard to measure whether they could fight it off immediately if infected again.

Another study, by the University of Melbourne, found that all patients in a group of 41 developed antibodies but, on average, they were only able to fend off 14.1 per cent of viruses if they were exposed a second time.

Research into other similar coronaviruses, which also infect humans but usually only cause mild illnesses, found that people did tend to develop protective immunity but their antibody levels dropped off within months and they could get reinfected again after around six months.

However, antibodies are only one type of substance that can produce immunity.

Others, including white blood cells called T cells and B cells, can also help the body to fight off disease but are more difficult to discover using currently available tests.

The Melbourne study found signs of elevated numbers of coronavirus-specific B cells and T cells in recovered patients, suggesting those types of immunity may be stronger than antibodies.

They called for more research on the subject.

A promising study done on monkeys found that they were unable to catch Covid-19 a second time after recovering from it, which led scientists to believe the same may apply to humans.

The rhesus monkeys were deliberately reinfected by scientists in China to test how their bodies reacted.

Because the coronavirus has only been known to scientists for seven months there has not been enough time to study whether people develop long-term immunity.

But, so far, cases of people getting infected more than once have not been numerous nor convincing.

The unidentified man went to an emergency department at Massachusetts General Hospital after suffering from a high fever for a week.

He tested positive for Covid-19 and then his condition rapidly worsened while he was in hospital.

Doctors managed to save his life with a lengthy stay on a ventilator but he fell sick again less than a fortnight later, despite testing negative twice before being discharged.

He again needed intensive care and recovered for a second time, although the state of his health afterwards was not revealed.

Medics discussed in the The American Journal of Emergency Medicine how it was possible that the man recovered and tested negative but fell ill again.

His medics said that, rather than getting infected twice, it’s likely he never fully recovered the first time and that tests weren’t sensitive enough to notice he was still carrying the virus.

The doctors, led by Dr Nicole Duggan, said: ‘Many viruses demonstrate prolonged presence of genetic material in a host even after clearance of the live virus and symptomatic resolution.

‘Thus, detection of genetic material by [swab test] alone does not necessarily correlate with the active infection or infectivity.

They said that in one 71-year-old woman, a study had found she continued to test positive for Covid-19 five weeks after her symptoms disappeared.

Because the virus was only first discovered in December, scientists have not had the opportunity to work out how it affects people in the long-term.

In one study done by the University of Amsterdam, researchers suggested the coronavirus may act in the same way as other coronaviruses that cause common colds and other infections.

The researchers followed 10 volunteers for 35 years and tested them every month for four seasonal and weaker coronaviruses named NL63, 229E, OC43, and HKU1.

Those viruses are much more common and cause mild illnesses similar to the common cold.

They found those who had been infected with the strains — from the same family as SARS-CoV-2, the type that causes Covid-19 — had ‘an alarmingly short duration of protective immunity’.

Levels of antibodies, substances stored by the immune system to allow the body to fight off invaders in the future, dropped by 50 per cent after half a year and vanished completely after four years.

By studying how people recover from viruses from the same family as the one that causes Covid-19, the scientists say their research is the most comprehensive look at how immunity might work for the disease that emerged in China last year.

Writing in the study, which has not yet been published in a scientific journal or reviewed by other scientists, the scientists said: ‘The seasonal coronaviruses are the most representative virus group from which to conclude general coronavirus characteristics, particularly common denominators like dynamics of immunity and susceptibility to reinfection.

‘Still, they all seem to induce a short-lasting immunity with rapid loss of antibodies. This may well be a general denominator for human coronaviruses.’