Israeli President Reuven Rivlin has warned Benjamin Netanyahu and rival Benny Gantz they must be ready to ‘pay a personal price’ as coalition talks got underway following the country’s deadlock election.

The trio met for two hours at the President’s Residence on Monday night, with Netanyahu and Gantz left alone for half an hour of closed-door discussions.

Afterwards, Rivlin hailed ‘significant progress’ and said both men had agreed to  enter into negotiations to form a government of national unity.

But separately, both Netanyahu and Gantz assured their allies that they are not giving any ground. 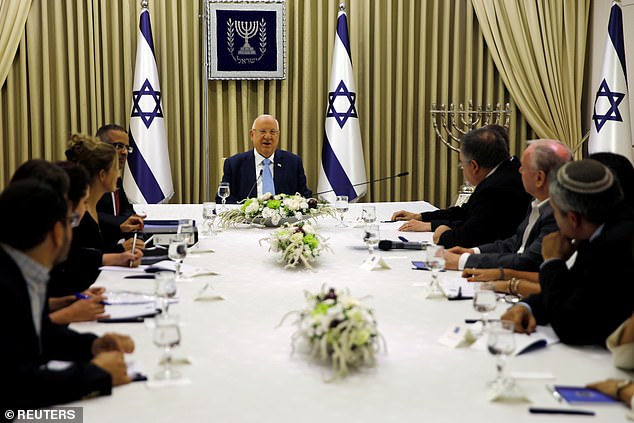 Rivlin said the two men had agreed to enter talks to form a national unity government, and their negotiating teams will meet Tuesday before another meeting of party leaders Wednesday

Netanyahu told his right-wing allies that he was sticking to his promise to negotiate as a bloc with them, and would not enter government without them.

Meanwhile Gantz assured his party faithful that he will not back down on his demand that Netanyahu stand down as prime minister.

He also vowed not to give up ‘on our values or on our natural partners’, having previously said he would not enter government with Netanyahu’s nationalist allies.

Gantz’s allies told the Times of Israel that they believe Netanyahu’s presence at the negotiating table is a sham, and that he is playing for a third round of elections later this year.

Meanwhile Netanyahu told a closed-door meeting of MPs that the current situation could take months to resolve, the Jerusalem Post reports.

Negotiating teams from both parties were due to meet Tuesday, before Netanyahu, Gantz and Rivlin meet for a second time on Wednesday.

As talks got underway, Rivlin said: ‘The responsibility for establishing a government falls on you, and the people expect you to find a solution and to prevent further elections, even if it comes at a personal and even ideological cost.’

The Israeli president is responsible for choosing a candidate for prime minister after national elections. That task is usually a formality, given to the leader who has the best chance of forming a stable majority coalition in the 120-seat parliament. 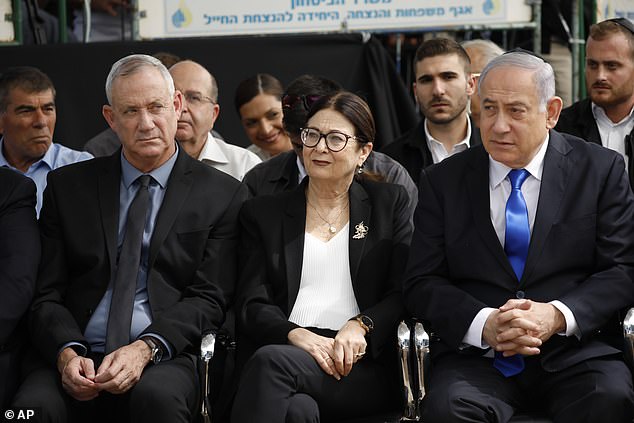 But in separate statements to the party faithful, both Gantz (left) and Netanyahu (right) insisted they are not giving up any ground

But last week’s election ended in deadlock, with neither Netanyahu, who has ruled the country for the past decade, nor Gantz able to put together a coalition with smaller allied political parties.

That has greatly complicated Rivlin’s task. A unity deal between the large parties is seen as perhaps the only way out of the impasse.

Rivlin has spent the past two days meeting with leaders of all parties elected to parliament.

Gantz’s centrist Blue and White came in first, with 33 seats, trailed by Netanyahu’s Likud, with 31.

With smaller allied parties, a total of 55 lawmakers have thrown their support behind Netanyahu, and 54 in favor of Gantz, leaving both men short of the required 61-seat majority.

Avigdor Lieberman, leader of the ultranationalist Yisrael Beitenu party, has emerged as the key power broker.

Lieberman, who controls eight seats, has refused to endorse either candidate. He’s demanded they join him in a broad, secular unity government.

Both Netanyahu and Gantz have expressed support for a unity deal between their parties. But there are deep, seemingly unbridgeable differences between them.

Gantz has said he will not partner with Likud as long as Netanyahu is at the helm, citing the prime minister’s legal problems.

Israel’s attorney general has recommended charging Netanyahu with a series of corruption-related charges and is expected to make a final decision following a hearing with the prime minister early next month.

Netanyahu, meanwhile, believes he should remain at the helm of a unity government and has signed a deal with his smaller allies, including ultra-Orthodox parties, to negotiate as a ‘bloc.’ 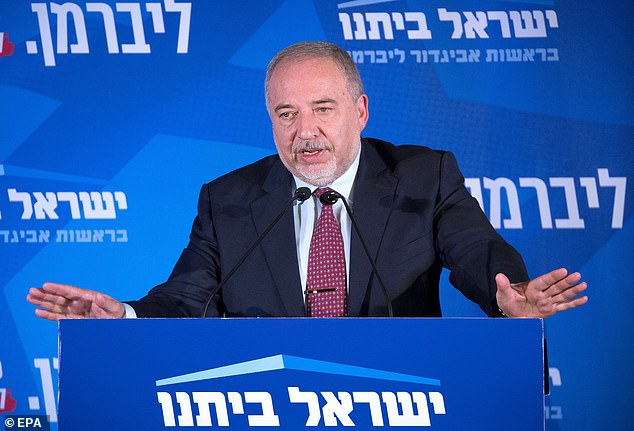 Avigdor Lieberman, leader of the Yisrael Beitenu party, has emerged as king-maker but is not currently endorsing either candidate 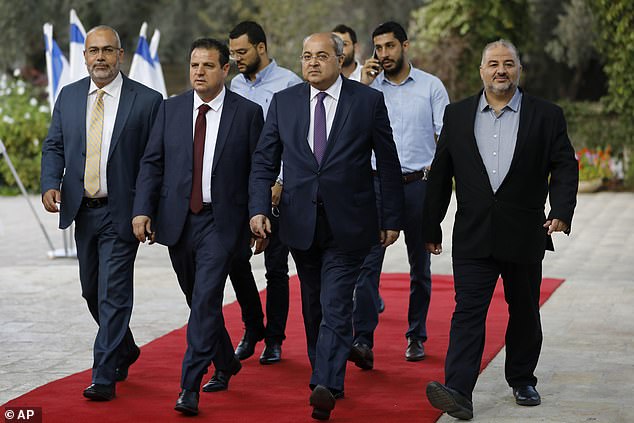 Israel’s Arab parties have broken with tradition to endorse Gantz, though are not united in their support and he is still short of a majority of seats

Lieberman, a former ally of Netanyahu’s, refuses to sit in a coalition with the ultra-Orthodox parties. In April, the Soviet-born politician refused to join Netanyahu’s coalition following elections, triggered the Sept. 17 repeat vote.

Lieberman objected to what he said was excessive influence by the religious parties, leaving Netanyahu without a majority and forcing him to call the new election.

Israeli media said no breakthroughs were expected at Monday’s meeting.

Rivlin is expected by Wednesday to designate either Gantz or Netanyahu with the seemingly impossible task of trying to cobble together a government.

His choice will have up to six weeks to reach a deal with coalition partners. If he fails, Rivlin can choose another candidate for prime minister. If those efforts fail, the country could be forced into a third election.

During Rivlin’s consultations, most parties made their expected recommendations: Nationalist and religious parties lined up behind Netanyahu’s Likud, while two more centrist parties sided with Gantz despite his military background.

In a break from custom, a coalition of Arab parties endorsed Gantz, the first time they had recommended a candidate since 1992.

Arab parties have usually refrained from an endorsement, not wanting to be seen as legitimizing Israeli policies they consider discriminatory or hostile toward their Palestinian brethren.

Arab leaders said the decision was aimed at toppling Netanyahu, whose anti-Arab rhetoric has offended the country’s Arab minority, as well as expressing their growing political influence. The Arab public makes up about 20% of Israel’s population.

But on Monday, three Arab lawmakers said they were withdrawing their recommendations for Gantz, trimming his support to below Netanyahu’s.

In last week’s vote, Netanyahu had hoped to secure a narrow majority of hard-line and religious parties that would grant him immunity from prosecution on charges that could include bribery, breach of trust and fraud. But now that possibility appears to be off the table.

Israeli law does not require a sitting premier to resign if indicted. But if he is charged, as is widely expected, he will come under heavy pressure to step down.