The attorney general has accepted police advice to charge Netanyahu in three different cases, including alleged trading of favours with media companies to receive favourable coverage.

The indictment, only weeks before he runs for a fourth consecutive term April elections, will be followed by a hearing where Netanyahu could defend himself before charges are filed.

Netanyahu denies all allegations against him and calls the investigations a bid by his political enemies to force him from office.

He is not required to step down if indicted, only if convicted with all appeals exhausted.

‘Unilateral publication of the attorney general’s announcement just a month before the elections, without giving the prime minister an opportunity to refute these false accusations, is a blatant and unprecedented intervention in the elections,’ the party said.

In one case, Netanyahu is accused of pursuing regulatory benefits allegedly granted to telecommunications firm Bezeq in exchange for positive coverage from a related media company.

Another involves Netanyahu allegedly seeking a secret deal with the publisher of Israel’s top-selling newspaper Yediot Aharonot to ensure positive coverage in return for pushing forward a law that would have limited the circulation of a rival.

The third case involves suspicions the premier and his family received luxury gifts from wealthy individuals in exchange for financial or personal favours. 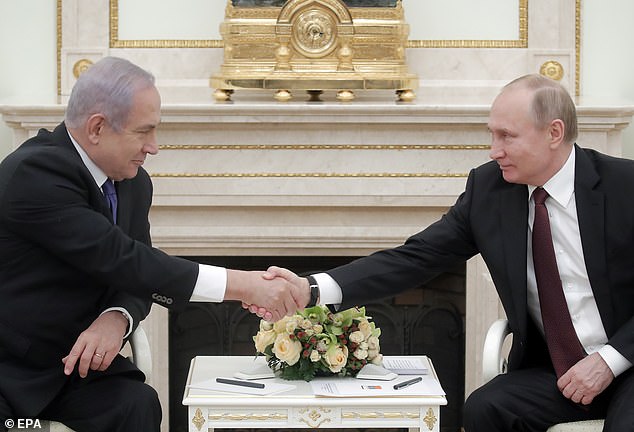 Police have recommended indicting Netanyahu, pictured with Vladimir Putin in Moscow, in three cases including alleged trading of favours with the media

At the hearing the PM would be given an opportunity to defend himself before charges are filed.

Some reports said Mandelblit would move to indict the prime minister for bribery, which a Netanyahu spokesman said would be ‘ridiculous’ and ‘absurd’.

Likud joined a petition filed with the supreme court to stop Mandelblit from announcing his decision before the elections.

The supreme court on Thursday afternoon rejected the petition, and Likud called the decision ‘regrettable.’

The 69-year-old has been prime minister for a total of around 13 years and he would be on track to surpass founding father David Ben-Gurion as Israel’s longest-serving premier should he win in April.

Netanyahu and his Likud party are facing a serious challenge from a centrist alliance led by respected former military chief of staff Benny Gantz.

The agreement to form the alliance under the name Blue and White – the colours of the Israeli flag – has shaken up the campaign.