Issues remain as 3rd round of NAFTA talks wraps in Ottawa

OTTAWA, Ontario (AP) – The most contentious issues in talks to renegotiate the North American Free Trade Agreement have not been introduced by the United States, the Canadian foreign minister said Wednesday as the third round of talks between Canada, the U.S. and Mexico concluded.

U.S. Trade Representative Robert Lighthizer said some issues related to small- and medium-size enterprises were resolved, but an enormous amount of work still needs to be done on other, difficult matters.

He said delegates made significant progress on competition policy, digital trade, state-owned enterprises and telecommunications. Details on the treaty chapter they agreed on were not available.

Canadian Foreign Minister Chrystia Freeland said that on potentially the most difficult areas the U.S. has not introduced formal proposals or text. Freeland said Canada can’t respond to something that has not been introduced.

U.S. President Donald Trump has called the 1992 trade deal the worst in history.

A fourth round of negotiations is scheduled for Oct. 11-15 in Washington.

Asked if she thinks the U.S. really wants a deal, Freeland answered: “I do not have the super power that allows me to look into the heart of a counter party and divine their true intention.”

The United States wants to eliminate NAFTA’s Chapter 19 private arbitration panels, while Canada wants to keep them. The panels can overrule tariffs, making it harder for the U.S. to unilaterally block products.

“Our government is absolutely committed to defending it,” said Freeland, who called it one of the great achievements of the initial deal.

Among other things, Washington wants local-content rules tightened to avoid imports largely made in third countries from being considered “made in North America” just because they were assembled in Mexico. Freeland said the U.S. has not introduced a proposal on rules of origin.

Freeland said she brought up the issue with Lighthizer and she would talk to U.S. Commerce Secretary Wilbur Ross about it.

Mexico’s low wages have also become an increasing point of debate. Mexico has drawn plants and investments by capitalizing on low wages and weak union rules, and Mexican business and labor leaders appear to be resistant to any attempt to tighten labor standards or ensure that Mexican wages rise.

Mexican and Canadian auto unions have said in a report that Mexican autoworkers earn about $3.95 an hour, which is about one-ninth of average wages north of the border.

Lighthizer said the U.S. has an interest in having wages in Mexico go up, the reasoning being that higher wages in Mexico will make it a less attractive place for manufacturing outsourcing.

“We are clearly looking at ways with the Mexican negotiators to try to have an impact on the wages in Mexico,” he said. 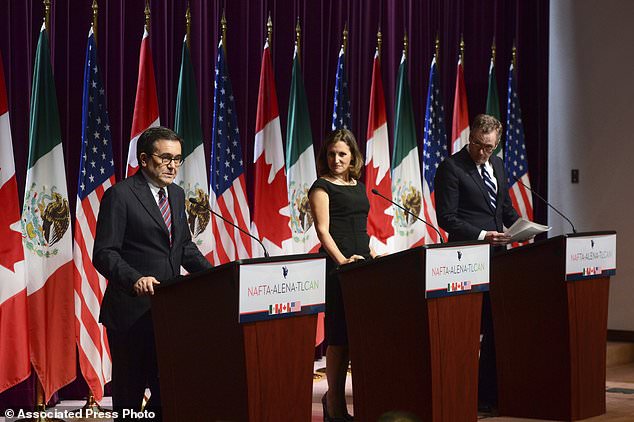 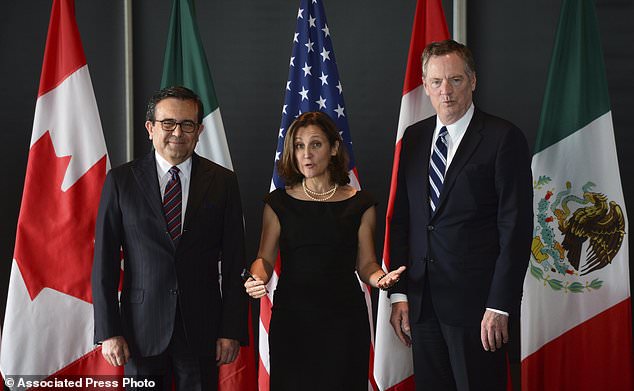