Istria is the answer for a budget family break

Mention Istria and it’s amazing how many people are under the impression it’s simply part of Italy. The Italian influences are everywhere — from the food to the architecture.

But this heart-shaped peninsula, which has been controlled, variously, by the Romans, the Venetians, the Austrians and the Italians before becoming part of Yugoslavia, is firmly in Croatia.

And once British tourists, feeling the pinch of the plummeting pound, find out about the prices, it could be overrun.

Italian influence: The pretty port of Rovinj, with its historic basilica at the top of the outcrop

Walking up the cobbled alleys to the Basilica at the top of ancient Rovinj, you could be in Tuscany or on the Amalfi coast.

But stop for a coffee or beer, at about £1.50 a time, or sit down for lunch with the family at £5 a pizza, and you soon realise that a wad of Croatian kuna will go a great deal further in Istria than a bundle of euros in Chiantishire.

Even the most demanding Italian fashionista would approve of our stylish villa not far from Porec, a honey-coloured fishing town built by the Venetians.

Tucked away off a quiet farm track, the Villa Art is an old stone farmhouse with a designer finish — groovy sun loungers around a private swimming pool plus all mod-cons within.

Every bedroom is ensuite with air-conditioning, a godsend with three overheated children in high summer. 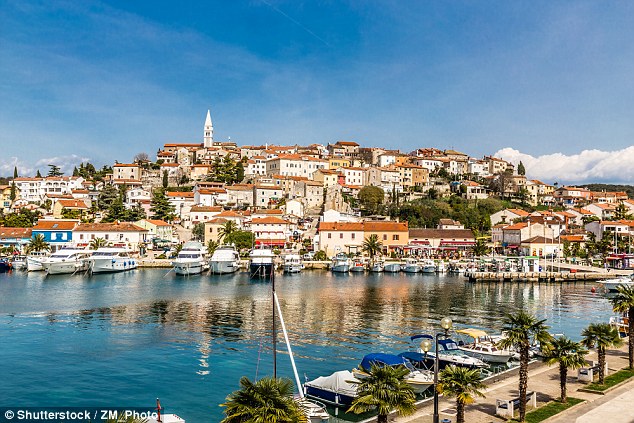 Robert and his family stopped at the town of Vrsar, where they enjoyed a swim at the beach

Operated by James Villas, it is one of its Best of James range of properties with a ‘wow’ factor.

A very considerable ‘wow’ was having a concierge service at the end of a phone, day and night, with a ready answer to every question, from how to operate the internet to where to eat.

There is lots to do once you have dragged yourself away from the pool.

Pula, the regional capital (and local airport with regular easyJet flights) is only 40 minutes away and has one of the finest surviving arenas anywhere in the former Roman Empire.

Historic Porec is smaller and perfect for an early evening wander.

We sit down for carpaccio and squid at the charming Konoba Cakula while our three children (ranged in age from nine to four) run up and down traffic-free streets dripping ice-cream. 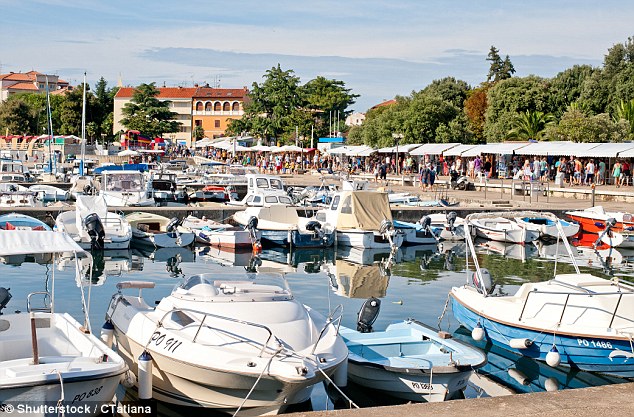 In Porec, the Hardman family stopped off to buy fruit and truffle oil at the quayside market

Their favourite place was Aquacolors, a huge aqua park — one of central Europe’s biggest — which sits on the outskirts of Porec.

It has every sort of watery ride, slide and tube, though the queuing system can be chaotic. We spend a day driving along the coast road past a succession of pretty towns, enormous campsites and roadside spit-roasts.

But with so much traffic on the move in high summer, the best way to get up and down the Istrian shoreline is on a sightseeing boat.

Many of these offer what they call a ‘fish picnic’, which turns out to be a half-day cruise with considerably more than a picnic.

We board the Astral, a wooden schooner with a big upper and lower deck offering plenty of space in sun and shade. 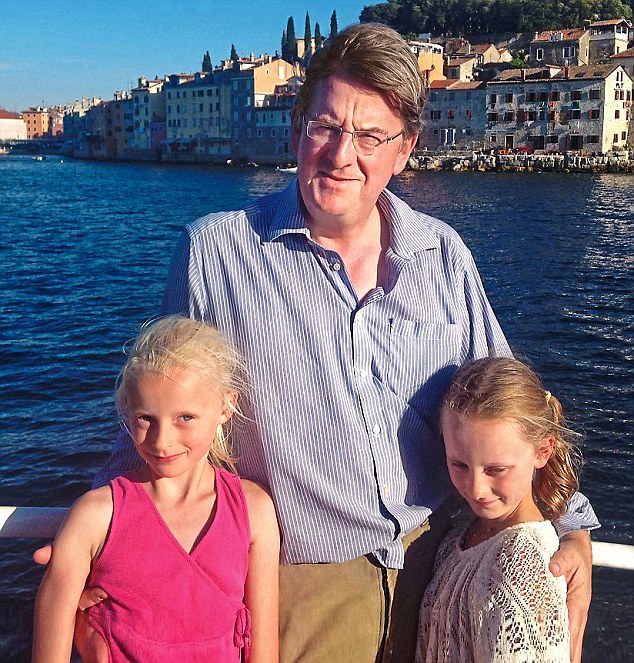 Robert Hardman with his daughters during their trip in Istria. They also visited the Brijuni Islands, a national park that was once a holiday resort for Edwardian aristocrats

It takes us from Porec down the coast to glorious Rovinj where we get off for a couple of hours, buy fruit and truffle oil at the quayside market and walk through the old town.

Back on board, the crew lays out a huge buffet of fish, meat, chips and salad plus copious amounts of a robust local white wine.

We munch away as the Astral chugs up the astonishing Lim Canal, a giant fjord-like crack in the Adriatic coast which meanders for miles inland. Later, we stop off at the pretty town of Vrsar for a swim at the local beach.

And all this for less than £30 a head (half that for children).

It is such a hit with my lot that we go on another outing to the Brijuni Islands.

Now a national park, this exotic archipelago was once an exclusive holiday resort for Edwardian aristocrats and Eurotrash. 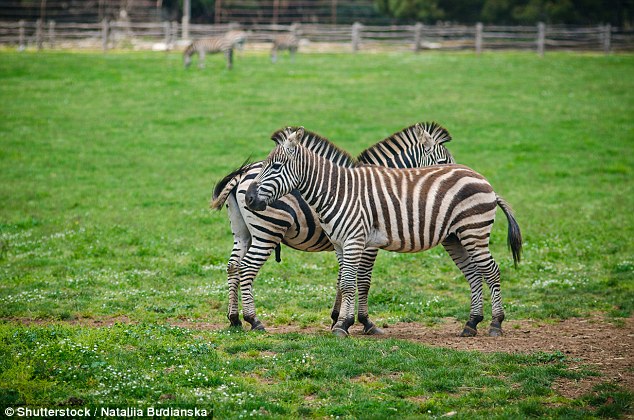 After World War II, it became the private retreat of Yugoslavia’s President Josip Tito. He built a zoo-cum-safari park on the largest island and invited world leaders and Hollywood stars to stay, Richard Burton and Elizabeth Taylor among them.

Today, visitors arrive on the main island and jump aboard a little road train which potters its way around this unlikely safari park, now home to a single forlorn elephant, a few zebras and various deer.

There’s a fairly tired museum containing stuffed ex-residents of the safari park plus Tito’s limo, but the children can’t wait to jump in the sea.

Many of the nicest bits of Brijuni are protected and off-limits to daytrippers.

So, sadly, we can only cruise past the island of Gaz, arguably the prettiest pimple in the Adriatic. A little cluster of greenery on a bed of white rock, it is shaped exactly like a fish. The perfect spot, in fact, for a fish picnic.

Travel Facts: Plan your own trip to Croatia