‘It doesn’t mean anything’: Mikel Arteta keeping his feet on ground as Arsenal soar to the top

‘It doesn’t mean anything… there areas we can do better’: Perfectionist Mikel Arteta tells top-of-the-table Arsenal they aren’t the finished package just yet, after dominant Bournemouth win

By Daniel Matthews For The Mail On Sunday

Mikel Arteta insisted it means nothing that Arsenal are top of the table after their perfect start to the season continued with a comprehensive victory at Bournemouth last night.

Martin Odegaard scored twice early on to put the visitors in command before defender William Saliba made it 3-0 after half-time with a brilliant left-foot goal.

The victory, Arsenal’s third on the bounce since the start of the season, means they sit top for the first time since December 2016.

This time last year, they were bottom, having lost their opening three matches.

But Arteta is refusing to get carried away by Arsenal’s lofty position. ‘It’s just three games, it doesn’t mean anything,’ he said.

He added: ‘I am very happy. It’s really difficult to come here and win 3-0. Credit to the boys. I’m really pleased but at the same time we have to look at ourselves and there are many areas where we can get better.’

Gabriel Jesus had a goal chalked off but he was once again instrumental at the heart of Arsenal’s attack. 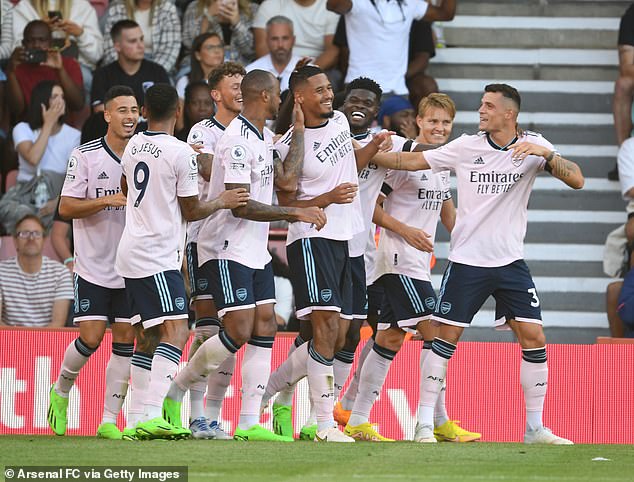 His brilliant run, which created Odegaard’s opener, set the tone and Arteta said Jesus’s quality is infecting his team-mates with ‘new confidence, spark, and that winning mentality that he has and the way he competes for every ball and the way he transmits his energy and his quality’.

Arteta added: ‘You can see that in the way he was involved today. He didn’t score, he had a goal disallowed, unfortunately, but he was in every action.’

Jesus is one of a number of new signings who have taken Arsenal to another level and Arteta insisted this fine start will not alter their hopes of adding more to their squad.

‘It doesn’t change, but we know as well where we are short, where we have to add more firepower,’ he said.

‘We want to get the players that we believe will make a big impact in the team. If we can do that, we will try.’