A major force behind the anti-lockdown protests that have ripped through Melbourne in recent weeks is a 24-year-old IT guru you’d never suspect.

Thousands of furious tradies, Covid conspiracy theorists and laid-off workers flooded the streets on Saturday, Monday, and Tuesday, brawling with police, smashing windows, and even throwing urine at reporters.

All the while nearly 9,000 hardcore supporters schemed, posted photos and videos, and cheered on the violence in Mr Mclean’s Telegram channel.

Mr Mclean used a separate page to post official updates and share flyers for the protests, which were shared across encrypted social media channels. 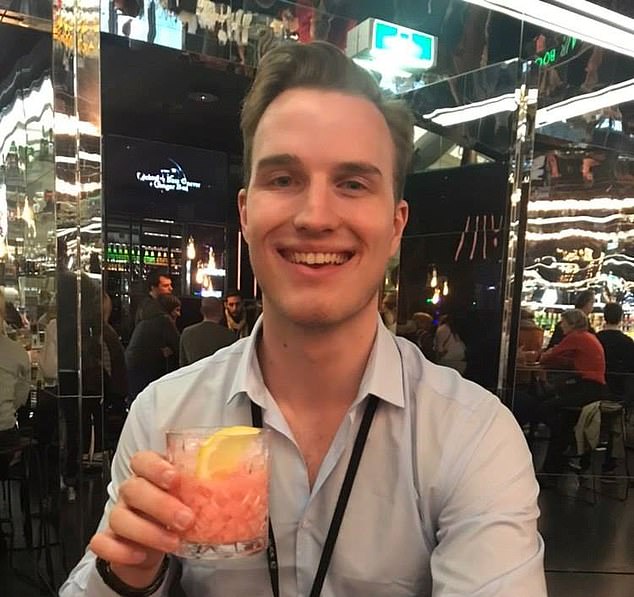 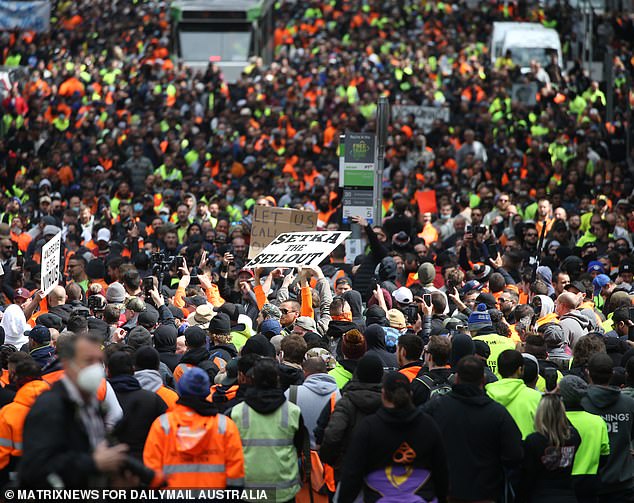 Police with riot shields monitored Tuesday’s rally, where demonstrators were told over loudspeaker ‘leave now or more force may be used’

There is no record of Mr Mclean encouraging violence of any kind in his promotion of the protests, however recent rallies have spiralled out of control.

First there was a march in the city’s suburbs on Saturday that injured 10 cops, and on Monday a mob attacked officials outside the CFMEU headquarters, hurling bottles and a bread crate and smashing windows.

On Tuesday thousands of demonstrators fought running battles with police as they marched from the union building to Parliament, and then blocked traffic on the West Gate Bridge.

Daily Mail Australia does not suggest Mr Mclean incited or condoned the violence that took place at the protests whatsoever.

But in reality the protesters appear to be a mix of disgruntled tradies and union members, Melburnians sick of lockdown, conspiracy theorists of all flavours, ultra-libertarian ‘freedom’ activists like Mr Mclean, and far-right rabble-rousers.

At a glance, the pale IT expert seems like the last person you’d expect to be involved with this rag-tag horde of hi-vis wearing demonstrators.

Mr Mclean graduated from the $9,000-a-year St Joseph’s College in Melbourne before studying computer science at Monash University from 2015-19.

Mr Mclean was also a competitive cheerleader, winning a tournament in June 2017 and posing with a teammate with their trophy for a celebratory photo. 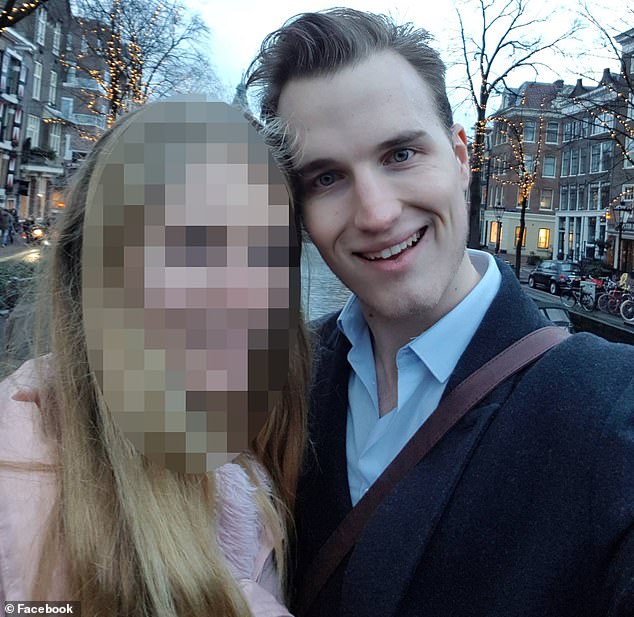 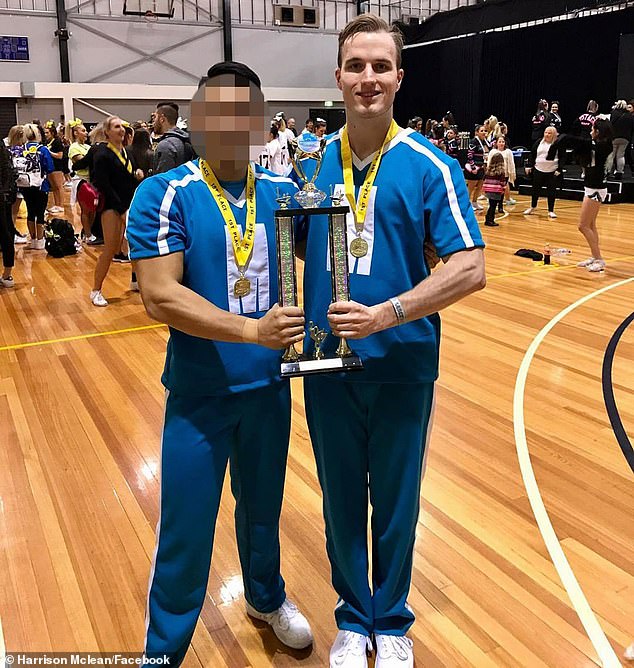 Mr Mclean was also a competitive cheerleader, winning a tournament in June 2017 and posing with a teammate with their trophy for a celebratory photo

Later he headed on an overseas trip through Europe and the US with his blonde-haired girlfriend at the beginning of his final year.

‘Harrison has a passion for designing voluntary systems of interaction to empower humankind, accelerate technological improvement, and protect the intrinsic rights of life, liberty and security of property,’ the company’s website reads.

After the lockdown ended he became a key organiser and drove a shift in rhetoric to general themes of ‘freedom’ that attracted legions of new followers.

He was filmed speaking at so-called ‘freedom’ rallies in December and January and on Australia Day, wearing an untucked shirt and sunglasses.

By March his movement had more than 2,000 members and has added 7,000 more in the months since, as Victoria was thrown back into lockdown. 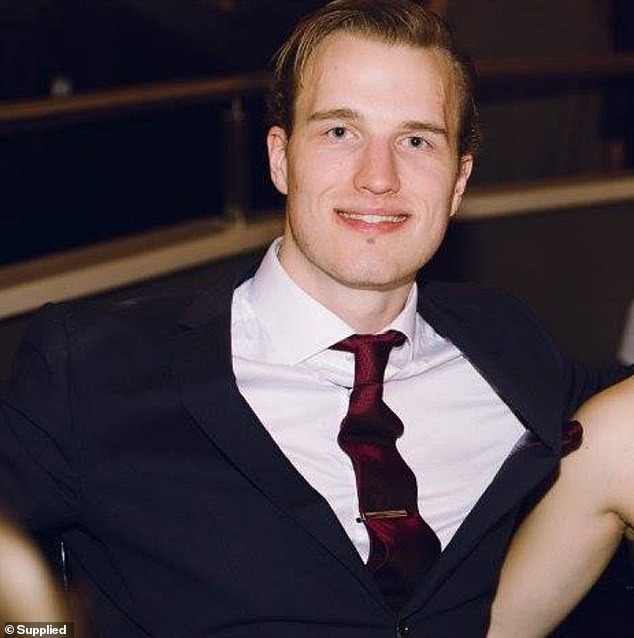 At a glance, the pale, smirking IT expert seems like the last person you’d expect to be pulling the strings behind this rag-tag horde of high-vis wearing demonstrators 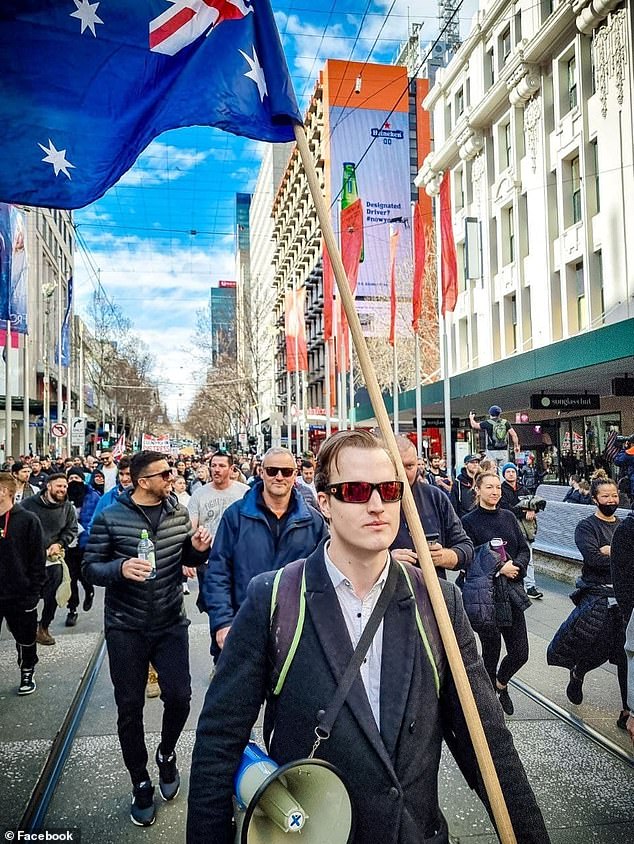 At a rally in March he proclaimed his movement was ‘done with the cabal which runs this country’ and claimed the Covid pandemic didn’t exist.

‘We are going to purge this country of every single incumbent politician who does not support freedom,’ he bellowed.

Protests were organised at least once a month and promoted with the same template of the rally details over a washed-out photo of the venue.

In May, he was part of a group of activists caught dining at Moda Kitchen and Bar in the inner-Melbourne suburb of Seddon during lockdown.

He was one of 15 diners, including protest leaders Monica Smit and Morgan Jonas sitting at a table enjoying glasses of wine.

‘We were just finishing lunch when the business got a call the police were on the way. People who dob on business is such a low act in my mind. Let’s all continue to support these types of businesses,’ one of them posted on Telegram.

Mr Mclean then began to expand the movement across the country, creating Telegram pages and discussion groups in major cities along with a national ‘Australia Freedom Rally’. 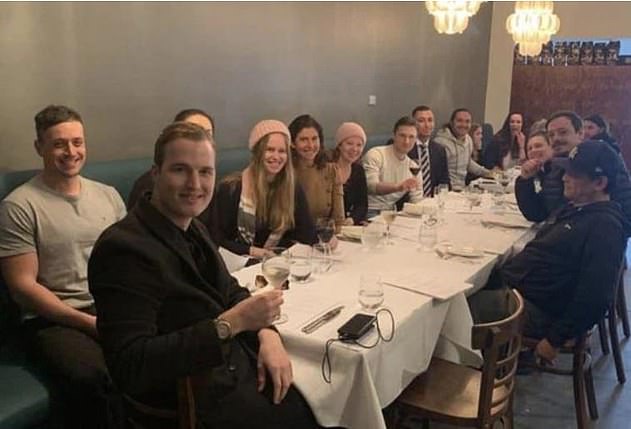 He also build a slick website for each city with identical branding and a page on every social media platform imaginable.

The websites claim the group has three sets of reasons for protesting – libertarianism, populism, and activism – drawing in as wide a coalition as possible.

‘We support reducing the scope of government, and empowering individuals to live the way they choose,’ it began.

‘We support direct democratic decision making at a more local level by an active and informed citizenry.

‘We support taking visible and regular action to promote our ideals, and shift the public conversation.’ 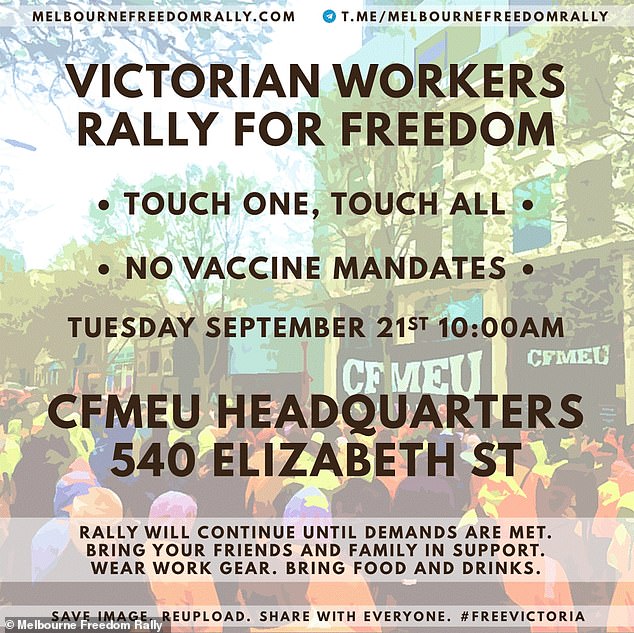 The websites claim the group has three sets of reasons for protesting – libertarianism, populism, and activism – drawing in as wide a coalition as possible

Saturday’s event, which was at its biggest in his home city of Melbourne, was planned since at least July but this week’s follow-ups were more spontaneous.

He and like-minded friends helped promote Monday’s rally at the CFMEU office on Telegram to capitalise on anger at the union’s support for vaccine mandates.

There is no suggestion they anticipated the violence that erupted, forcing riot police to fire rubber bullets at the mob.

But the group didn’t hesitate to immediately push an even bigger rally the next day after Premier Daniel Andrews shut down the whole construction industry for two weeks in response to the wild scenes.

From there, the mob in Mr Mclean’s Telegram group took over, helping to mobilise thousands of demonstrators.

‘As someone who was here when this group was just a few randos and 20 people would come to a protest, I can verify that the movement is rapidly gaining momentum,’ he wrote.

‘This is the start of something big, without a doubt.’ 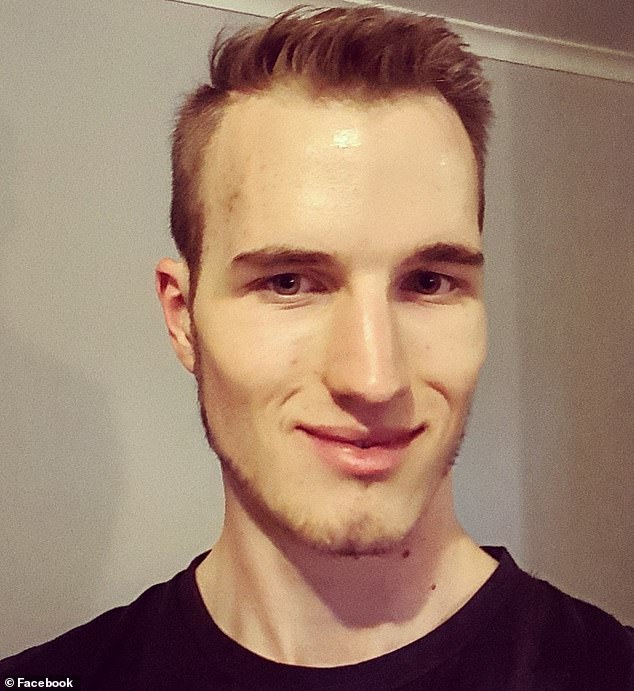 Mr Mclean, who also posts as ‘Dominic D’, used a separate page to post official updates and share flyers for the protests, which were shared across dark corners of social media 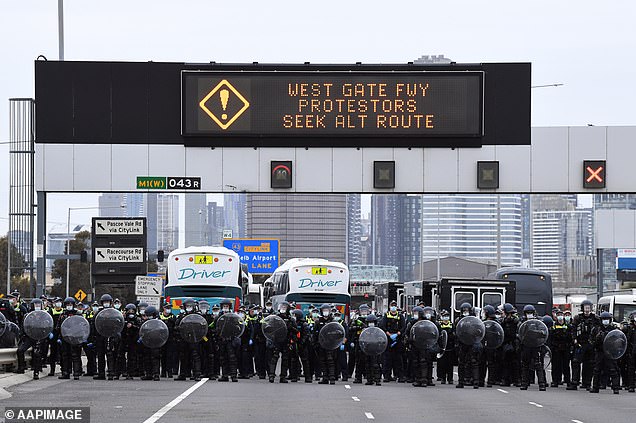 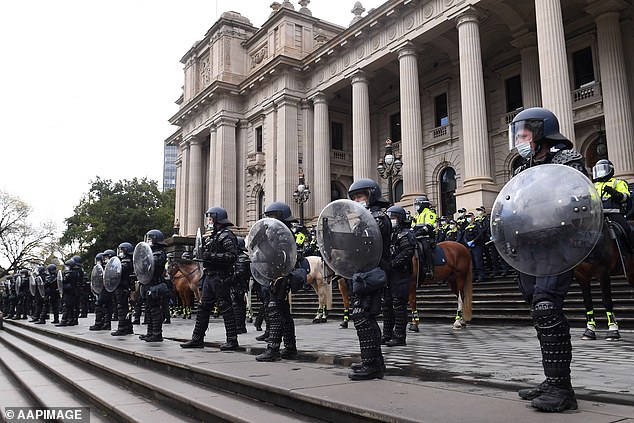 Violence was even worse on Tuesday with rampant property damage, pitched battles with police on the streets, and urine bombs hurled at media.

Dozens of messages were posted every minute in the Melbourne Freedom Rally group Mr Mclean runs, with users sharing videos and photos.

Mixed in was extreme conspiracy propaganda and vicious attacks on police, the media, Mr Andrews, health workers, and even friends who refused to protest.

‘Take the evidence and put her on the list for crimes against humanity,’ one wrote about a nurse pleading with Australians to get vaccinated. 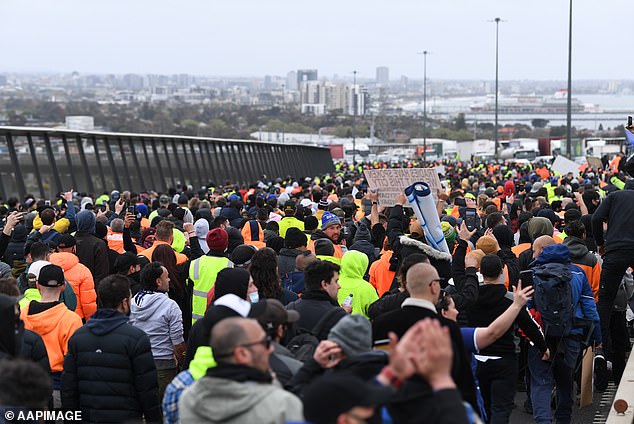 Mr Mclean and his admins try to rein it in and get discussion ‘back on topic’ but there has been a filthy deluge of messages.

During an interview with the Guardian in March, Mr Mclean claimed he was seeking to unite people on the basis of ‘peaceful protests’ and ‘idea of freedom’.

‘[The aim] is to empower people so that if they’re not necessarily politically active before, then a political protest might be some way for them to sort of begin their process of engaging in this space, but I’m absolutely not trying to radicalise anybody,’ he said.

The news outlet claimed Mr Mclean was part of a chat group used by far-right group Proud Boys to vet new members, although he declined to confirm whether he was a member of the organisation.

However, he did reveal some members were involved in his freedom movement and he had run into leaders of the Australian branch at some of his events. 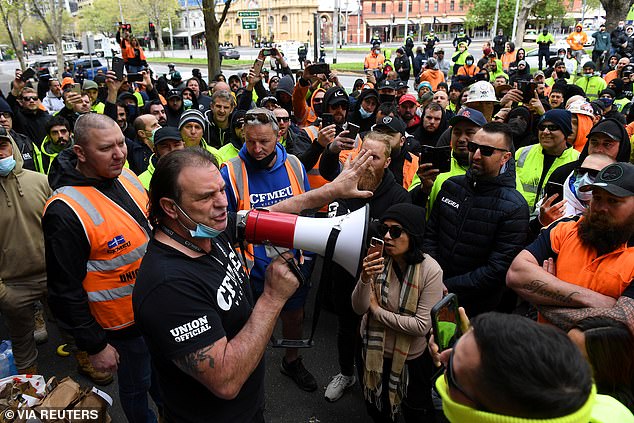 Mr Setka, the longtime CFMEU state secretary, tried to appease the crowd and address the protestors over loud speaker 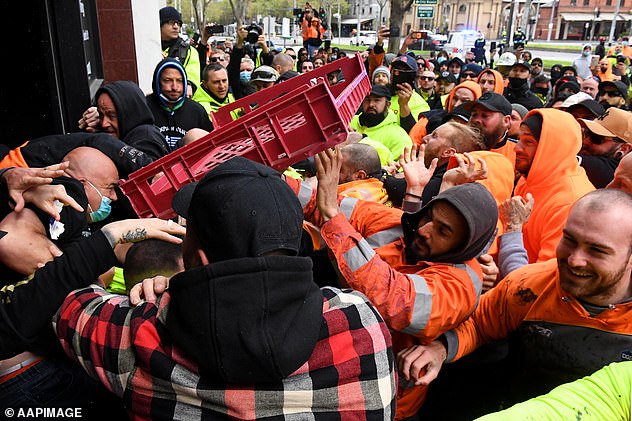 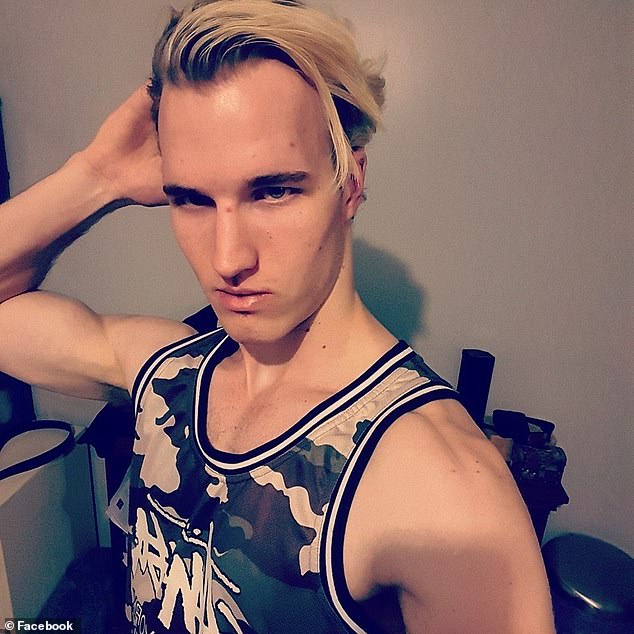 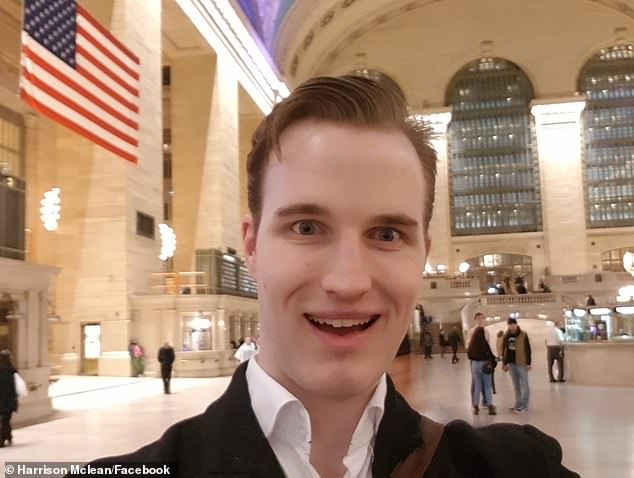 During an interview in March, Mr Mclean denied he had intentions to convert his legion of followers into anti-Semitism

Anti-lockdown demonstrations have caused carnage in Melbourne in recent months, with running battles between hundreds of protesters and police trying to break up the crowds breaching public health orders.

The protesters often espouse a mix of oppositional views to masks, vaccines, Covid restrictions, and lockdowns – with some tied into conspiracy theories the pandemic is ‘fake news’ constructed by world leaders to control the masses.

On Monday, violent anti-vax protests erupted outside the CFMEU’s head office in central Melbourne, as tradies clashed with Mr Setka and other union officials, hurling abuse and projectiles and smashing glass windows.

Victorian authorities later that afternoon announced construction would be closed in locked-down Melbourne, Geelong, Ballarat, Mitchell Shire and the Surf Coast, due to the spread of Covid on sites and poor compliance with restrictions.

11. All construction sites to resume immediately. 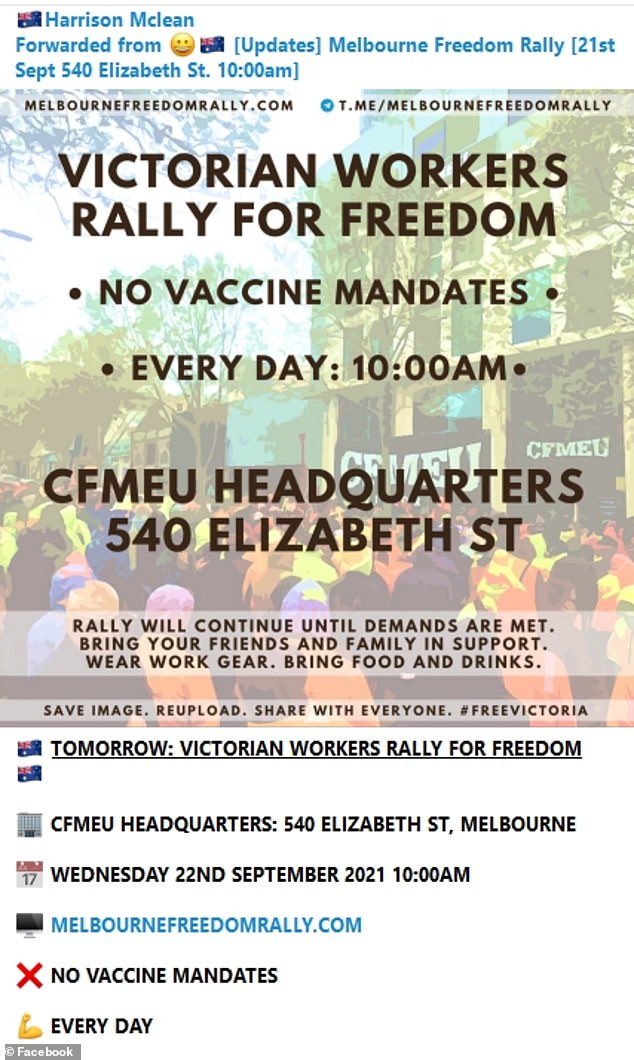 Furious tradies again took to the street on Tuesday, with the riot squad and mounted police facing off with the hi-vis wearing crowd – mostly men – as they marched from the union headquarters to Parliament.

The riot squad, supported by police on horseback, warned the group to stay back and fired rubber bullets into the crowd near the Queen Victoria Market.

Empty bottles and cans were thrown back at officers, while flares and fireworks have been set off throughout the day and a news crew assaulted.

Industrial Relations Minister Tim Pallas and Health Minister Martin Foley both condemned Monday’s violence, with the former describing it as ‘deplorable and an insult to every Victorian who has been doing the right thing’.

The Property Council of Australia said the shutdown would cost the economy $1.1 billion a week, with Mr Pallas said support for the industry would be announced in the coming days.

All construction sites will need to demonstrate COVID-19 safety compliance before reopening, including proof workers have had at least one vaccine dose before returning on October 5.