British savers are loyal to their banks. Millions of us still have the same current account we used to squirrel away pocket money in as children – even though the local branch may have long been axed.

But this dependence on traditional banks – such as Barclays, HSBC, Lloyds and NatWest – is cracking. Last month, US banking giant JPMorgan became the latest newcomer into the UK banking market, with its new brand Chase.

It is among several digital banks throwing the cat amongst the banking pigeons. Unlike complacent incumbents, they are hungry for customers. They know that with the British public’s reluctance to switch current accounts they have to offer them something special to win them over.

Face of the future?: A robot on the website for Chase’s new digital bank

Here, we examine the major digital banks vying for our attention – and which ones may be worthy of it. It may well be time to break the habit of a lifetime – and switch to a digital bank.

What is a digital bank?

They are banks that customers must access through a website or mobile app. They do not have a high street presence, so they will not be for everyone as many people still prefer to do their banking in person – hence this newspaper’s Keep Our Cash campaign.

A digital bank account can be an ample replacement for one offered by a traditional high street bank. They offer the same ability to carry out transactions, offer debit and credit cards and enable spending abroad. Yet many customers of digital banks choose to keep their old bank account open as well.

It is hard for a newcomer to enter the UK banking market. Deep pockets are required and a proposition enticing enough to attract customers.

Chase possesses the powerful combination of an innovative product and the financial clout and reputation of an established brand. Chase already serves 56million digital customers in the US and its parent company JPMorgan manages trillions of pounds of assets.

It is offering a current account to start with, but Chase plans to move into savings, investments, lending and even pensions in time.

Its unique selling point is one per cent cashback on all purchases for 12 months whether made in shops, online or abroad. There are a few exceptions, such as gambling and big ticket items including cars and antiques.

Customers can also opt to round up purchases to the nearest £1 and save the change in a separate savings pot which earns five per cent interest.

Such a rate is off the scale compared to rates offered by other banks. However, you’d have to make a vast number of purchases to start earning a meaningful amount of interest.

Chase debit cards will not show a card number, sort code or other key information – these will only be accessible via the app.

The bank believes this will reduce the security risk if a card is lost – and a new one can be generated immediately. Customers can also have separate accounts for different types of spending.

The account is charge-free and there are no charges for using it abroad. Although Chase does not have a customer service track record, it means business. It has already created 400 jobs in the UK and plans to hire more as it grows.

Customers will be served by a purpose-built customer contact centre in Edinburgh. Chase currently has a waiting list so that it can manage the process of signing customers up smoothly.

It was founded seven years ago by leading banker Anne Boden. It offers personal and business accounts and has more than two million customer accounts.

Starling repeatedly rates highly for customer service. It has been voted Best British Bank for the past four years and topped the customer satisfaction table compiled last year by consumer group Which? The accounts are app-based. Customers can receive instant alerts whenever payments leave or enter their account and categorise spending so they can see where their money is going.

Customers may also be able to see details of their mortgage, insurance products and pension on the app. Starling can issue a connected card – a debit card that you can give to someone if they are spending on your behalf. You can also portion your money out into virtual piggy banks so as to help you manage your savings. There are no account charges with arranged overdrafts attracting typical interest of 15 per cent. 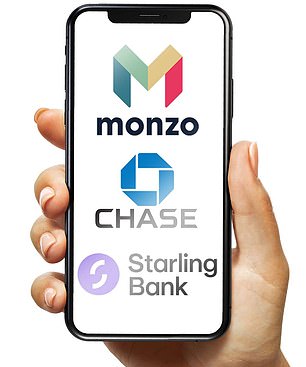 Hands-on: The major digital banks vying for our attention

There are no charges for overseas usage while industry insiders say its customer support is stellar. Problems rarely arise and when they do they are dealt with swiftly.

Perhaps best known for its fluorescent coral-coloured bank cards, Monzo is popular and has attracted more than five million customers.

Its current account has plenty of nifty budgeting features. Monzo sends automatic alerts whenever money is paid in or taken out of your account, so you can track your balance in real time.

Spending is also broken down by category in the app so you can see where your money is going. When you’re paid, your income is automatically moved into different pots, for example a pot for bills and another for a rainy day fund.

Monzo also offers a feature for groups of people with shared spending – for example, friends on holiday or living together with shared bills. You can add payments to a shared tab on the app to be settled up later.

Although its basic current account is free, ‘premium’ versions cost £5 or £15 a month. These come with extra features such as travel insurance and up to 1.5 per cent interest on up to £2,000 in your account.

Monzo offers arranged overdrafts with an interest rate of 19, 29 or 39 per cent, depending on your credit score.

Last month, Monzo became the first major bank to launch its own buy now, pay later scheme. It does not charge fees for transactions abroad. However, for customers who do not use Monzo as their main current account, there are some fees for withdrawing cash abroad.

Monzo is rated highly for customer service, according to consumer watchdog Which?. Consumer complaints handler Resolver also says it is one of the best digital banks when something goes wrong.

Monzo’s offering is targeted at a younger customer who may be more likely to split bills or go on holiday in groups.