That’s why when, years ago, my best friend and I talked about my forthcoming first child, I avoided mentioning my preferred choice for the simple reason that she already had a toddler called Olivia.

I have always loved that name and I’m clearly not alone as it recently topped the list of the country’s favourite female baby names for the sixth year running.

So, do I now have my very own Olivia? Well, yes, but it was rather a circuitous route to get there…

Initially, my friend Shannon had joked about how toe-curling she’d find it if I copied the name, so I spent my pregnancy grappling with the knowledge it was off-limits. The situation was made worse because I’d chosen her, a doctor, as my birthing partner. (My husband showed about as much interest in the whole process as our cat.)

Looking back, it seems ridiculous, but as I sat in Shannon’s car on the way to the hospital trying to breathe through my contractions, I still couldn’t tell her. In fact, even though I was desperate for a girl, I almost started to hope for a boy. At least then I could call him Oliver.

My husband Rupert couldn’t see what the problem was. He loved the name Olivia too and was utterly perplexed. ‘Just ask her,’ he kept telling me. But I couldn’t. ‘You’re a man,’ I told him. ‘You wouldn’t understand.’

I wrestled for days with the moral dilemma and, in an act of cowardice, we bottled it and decided to find another name.

Our baby was six days old when my husband and I watched Breakfast at Tiffany’s and settled on Holly after Holly Golightly, the character played by Audrey Hepburn. It did not go down well with the Italian relations. The Swedes were nicer about it, but I don’t think anyone was overly enamoured. Least of all me.

When Holly was just over a year old, we moved to France and there the consequences of my weakness really hit me. Holly in French is pronounced ‘au lit’ which means ‘to bed’. Not a great name for anyone, let alone a little girl trying to fit in. I had never been comfortable with Holly. Every time I started fretting, I would remind myself of Holly Golightly, but as one helpful friend put it: ‘You should have just called her Audrey.’ 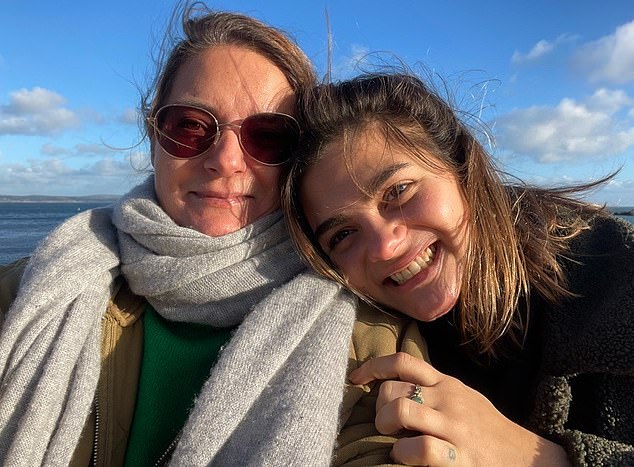 Helen pictured with her daughter, Olivia now 23. Olivia is known by everyone as Olive

Rupert also began to complain after one of his cycling pals almost fell off his bike laughing at ‘au lit’.

I’d had enough. We had been in France for about four months when one evening I went online and, with Rupert egging me on, did something I had been thinking about for weeks: I officially changed our daughter’s name to Olivia Holly Sintra by deed poll.

It took about three minutes online. I filled in a form and paid a fee of £60. There were a few admin chores, such as a new passport when the time came, but all I had to do was show the deed poll certificate.

The reaction from friends and family was extremely varied. The Italian relations were delighted. They, like the French, had never been able to pronounce Holly in the first place.

Some of the English contingent, though, were a little surprised to say the least. One friend went so far as to suggest it was akin to erasing Holly’s existence.

Another godparent refused to call her anything but Holly. But most of them understood the rationale behind the change when we explained it was down to our relocation to France (I didn’t dwell on my earlier weakness) and were pretty sanguine.

As for Shannon, she and I lost touch after we both moved, which meant I never had to have that conversation.

The worst moment for me was when Olivia, then aged six, marched up to me, a personalised baby book in her hand, demanding to know just who ‘Holly’ was, as if I’d been hiding a secret sibling from her. We hadn’t mentioned the name change to her; she was just too young.

Her lovely French childminder had continued to call her ‘Ollie’ (which worked for both Holly and a nickname for Olivia) and in the family she had a pet name anyway.

But that day I had to stop everything I was doing and explain the whole saga. At which point, I could start to imagine what an ‘actually, you were adopted’ conversation might feel like.

Olivia took it well, in fact by then she referred to herself as Olive anyway, so didn’t really see what the difference was.

She’s now 23 and still known by everyone as Olive. Olivia is only for people she doesn’t like or when she’s in trouble!