An Italian archbishop who has represented the Vatican in the US and Europe has called for a global exorcism prayer on Saturday to defeat coronavirus.

Carlo Maria Vigano told followers to recite an exorcism prayer on Saturday to expel ‘Satan’ as the pandemic has sent millions into lockdown.

Archbishop Vigano sent the message to the faithful to say the ‘Exorcism against Satan and the apostate angels’ psalm at home as mass gatherings including church services have been banned in much of Europe and the US.

First published by Pope Leo XIII in 1890, the prayer was written ‘to curb the power of the devil and prevent him doing harm’.

Vigano said that over Easter, while many are unable to visit traditional church sermons, people should join together in the same prayer. 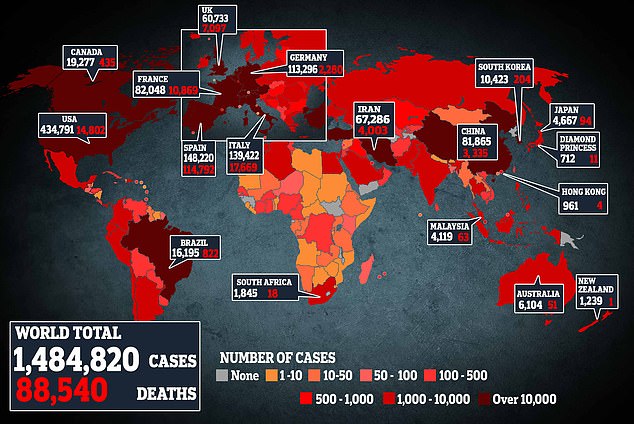 In an article written for Catholic new outlet, Life Site, today Vigano wrote that as Christians cannot visit confession, they should still continue ‘praying to our Lord’ against ‘the Evil One’.

The 79-year-old wrote: ‘In these modern times of terrible tribulation, when the pandemic has deprived Catholics of Holy Mass and the Sacraments, the Evil One has gone into a frenzy and multiplied his attacks to tempt souls into sin.

‘These blessed days of Holy Week, which used to be the ideal time to go to Confession to prepare ourselves for our Easter Communion, now see us locked inside our houses, but they cannot stop us praying to Our Lord.’

Vigano added that ‘there is no need to go out, or to breach any of the laws currently in force’ when praying against the devil.

The archbishop also asked his fellow priests to join the prayer and to wear a stole – a band of colored cloth used by priests around the world. 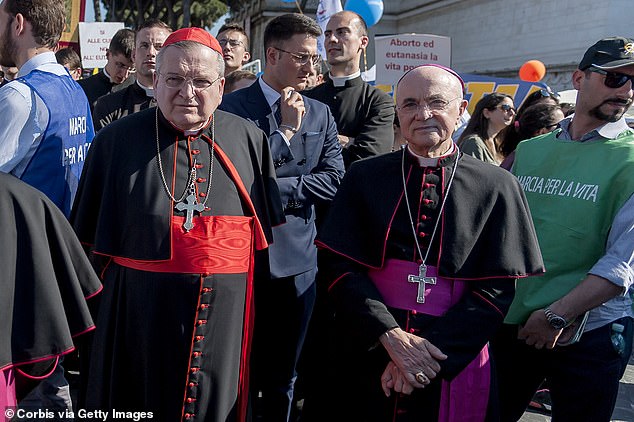 He wrote: ‘I should like to ask all my brother bishops and priests to join me as I recite this exorcism, knowing the power of this sacramental – especially when it is recited together with all other priests – to help the Church in her fight against Satan.

‘I should also like to recommend that all of you wear a stole, the sign of your priestly power, and holy water.’

Archbishop Vigano was born in Varese, Italy, and was ordained as a priest in March 1968, before working as a Vatican diplomat in Iraq and Britain in the 1970s.

In 1989 Vigano was appointed as the Vatican representative to the Council of Europe in Strasbourg.

He was later the General of the Governatorate, looking after the Vatican finances, from 2009, before serving as apostolic nuncio in Washington DC from 2011 to his retirement in 2016. 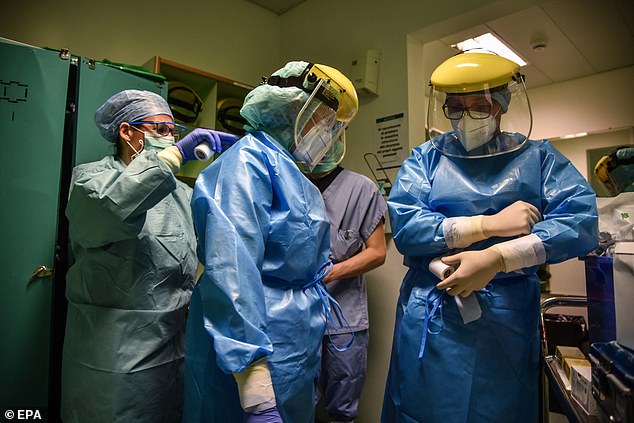 Dressing operations for doctors and nurses in the Covid-19 ward of Humanitas Hospital in Rozzano, near Milan, today. Italy is under lockdown in a bid to stop the spread of coronavirus

Vigano previously called on Pope Francis to resign, claiming the pontiff knew of sex abuse allegations against Archbishop Theodore McCarrick but covered them up.

In a letter he personally told Pope Francis that McCarrick was accused of inappropriate behavior and Pope Benedict XVI imposed sanctions ordering him to a life of penance.

According to Vigano, during a June 2013 meeting Francis asked him what kind of man McCarrick was like.

Vigano said he replied: ‘He corrupted generations of seminarians and priests and Pope Benedict ordered him to withdraw to a life of prayer and penance.’

He alleged that the pontiff was trying to find out if he was an ally of McCarrick or not.

Vigana also accused three consecutive Vatican secretaries of state of knowing about McCarrick’s behavior but doing nothing about it.