A rainy holiday is always depressing.

But one Italian island has decided to lift spirits that have been dampened by downpours, by promising to refund tourists the cost of their accommodation if the heavens open during their stay.

Elba, off the coast of Tuscany, has launched the ‘Elba No Rain’ campaign for the month of May.

The town of Portoferraio on the Italian island of Elba, off the coast of Tuscany. Hotels on the island are promising to refund tourists the cost of their accommodation if it rains during their stay

To qualify for the deal, tourists on the island must be staying at an approved guesthouse or inn taking part in the campaign.

If it rains for two consecutive hours on any given day, the cost of that night’s stay will be reimbursed.

The full cost of their accommodation bill will be refunded if it rains for more than two consecutive hours every day they are on the island.

However, there is some small print to note – the offer only applies until May 31 and then again from September 15 to October 31.

The rain must fall for two consecutive hours between the times of 10am and 8pm and the cost of breakfast and dinner is not included in the refund.

So far this year, no holidaymakers have been entitled to a refund. 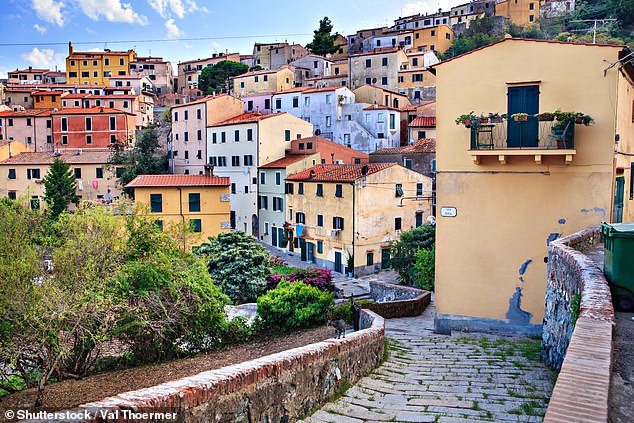 The streets of Rio Nell’Elba on Elba. It is the third largest island located off the coast of Italy after Sicily and Sardinia

Claudio Della Lucia, tourism coordinator for the island, told CNN: ‘Tour operators tell us that weather forecasts of a rainy weekend can lead to a drop in bookings and attendance of over 20 per cent.

‘The Elba No Rain initiative wants to be a concrete assurance to guests that, in the very rare case of a day with steady rain, they can still enjoy everything that the island has to offer without paying a euro for accommodation.’

Elba is the third largest island located off the coast of Italy after Sicily and Sardinia.

It is best-known for being the island where French emperor Napoleon Bonaparte spent 10 months after his exile from France.

Tourists flock to visit its beautiful beaches, Napoleon’s former home and to see its ancient ruins that date back to the Etruscan era.