A chain of Italian islands will ban the use of disposable plastic from tomorrow in an attempt to clean up the oceans.

Antonio Fentini, mayor of Isole Tremiti, a protected archipelago off the coast of Puglia, said anyone caught with single-use plastic from March 1 faced a fine of up to 500 euros (£440).

The ban will initially cover picnic-ware such as plates, cups and cutlery, but would soon expand to include bottles and polystyrene as well.

Antonio Fentini, mayor of Isole Tremiti, a protected archipelago off the coast of Puglia, in Italy, has banned disposable plastic starting from tomorrow (file image)

‘Day after day we’re seeing humans kill our sea and we had to do something, immediately,’ he told  La Repubblica.

It comes after scientists testing the waters from the nature reserve in which Isole Tremiti sits found high levels of microplastics – piece of plastic that are less than 5mm in diameter.

Microplastics are considered particularly harmful to marine life because they can easily be ingested in large quantities, exposing fish to harmful chemicals.

Fentini added: ‘I’m calling on the mayors of all islands and coastal areas to follow suit. Let’s all try to do some good for our planet.’ 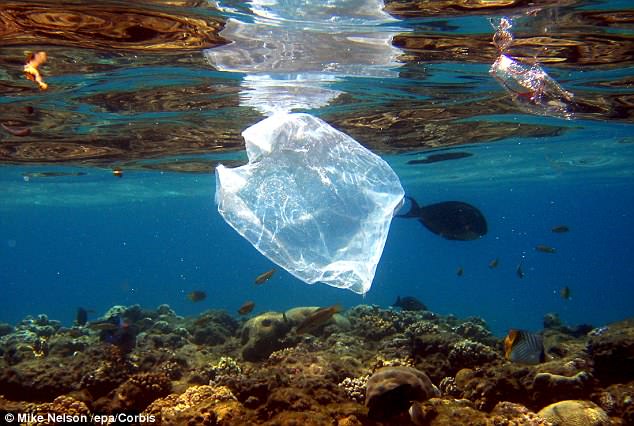 It is estimated that 90 per cent of litter in the Mediterranean is made from plastic, and the sea has one of the highest concentrations of microplastics anywhere in the world

Italy became one of the first countries in Europe to completely ban the use of plastic carrier bags in 2011, and replaced ultra-thin bags used for produce with a biodegradable alternative this year.

France has also passed legislation banning single-use plastic from 2020, while major UK retailers have agree to stop using of disposable plastic by 2025.

Greenpeace studies  suggest that more than 90 per cent of litter floating in the Mediterranean or on its deep sea floor is made of plastic.