Italy was on the verge of forming a coalition on Monday as the country’s biggest political parties put forward a candidate for Prime Minister.

5-Star and League were due to present their man, believed to be lawyer Giuseppe Conte, to President Sergio Mattarella for final approval around 3.30pm.

If Conte is approved then a Cabinet could be in place by the end of the week, allowing ministers to get working on a government agenda that calls for swingeing tax cuts, increased public spending and tougher action on migrantion. League party leader Matteo Salvini has pledged to deport 500,000 migrants ‘as a priority’ while other government plans include tax cuts and spending increases

It has been 11 weeks since Italy’s general election resulted in a hung parliament.

5-Star campaigned on a pledge to introduce a weekly wage for Italy’s poorest, while League proposed a flat 15 per cent tax rate for businesses and people alike.

European leaders have expressed concern over the agenda, which will increase Italy’s debt pile – which already stands at 130 per cent of GDP – and may breach EU banking laws.

The parties have also said they would renegotiate EU rules that require migrants to be dealt with by the first country they arrive in.

They also pledged to build more detention centres and review the policy of rescuing migrants whose boats capsize.

Italy has been on the front line of the EU’s migrant crisis, with hundreds of thousands making the journey across the Mediterranean from North Africa.

Lega leader Matteo Salvini has said an estimated 500,000 undocumented migrants in Italy must be deported ‘as a priority’. He told supporters he would rid the country of ‘delinquents’.

Both parties have also pushed back against concerns over their spending plans.

In a blog post, 5-Star dismissed suggestions they would bust public finances.

The party said expenditure would be spread over the 5-year legislature and would be accompanied by spending cuts.

He said on Twitter: ‘We will do the opposite of what preceding governments have done. Am I wrong?’ 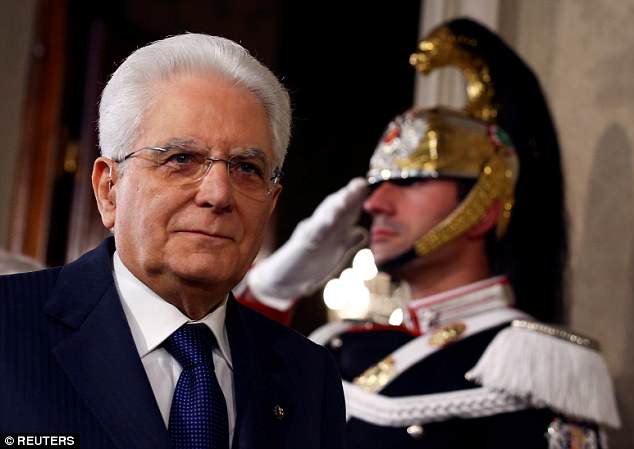 Italian President Sergio Mattarella is due to meet with Di Maio and Salvini at 3.30pm on Monday to give his say on whether Conte should be approved as Prime Minister

On Monday, European Central Bank council member Ewald Nowotny said he hoped the government’s approach would be ‘much wiser’ than what he had read about in newspapers.

Italians appear to want the tie-up. Some 60 per cent are in favour of a 5-Star/League coalition government, a Demos & Pi poll published on Sunday showed.

More than 80 per cent of 5-Star and League voters back it, the poll said.

The likely prime minister candidate, the 54-year-old Conte, was put forward before the election as 5-Star’s possible pick as public administration minister.

He is seen as a compromise candidate, a technocrat who can balance the demands of the rival parties.

Conte has worked as a lawyer as well as an academic, and has studied for brief spells at Yale, New York University, Cambridge and other foreign universities.

Though not in the top post, 5-Star leader Luigi Di Maio and League’s Salvini are seen in the Cabinet, according to newspapers.

Di Maio is tapped to become the labour and welfare minister to ensure the passage of the movement’s cornerstone election promise, a universal income for the poor.

Salvini, on the other hand, is seen taking over the Interior Ministry, which handles immigration issues.

More than one name circulated for the key economy ministry portfolio.

Paolo Savona, an 81-year-old economist and former industry minister, was mentioned the most, but Salvini’s top adviser Giancarlo Giorgetti could also get the job, newspapers said.