Calls to resign: Silvio Berlusconi’s government was branded a shambles by the opposition

Italy’s austerity budget got its first parliamentary nod but opposition ministers are still calling for Silvio Berlusconi to resign and branded his government a shambles.

The four-year 40 billion euro package, aimed at balancing the budget by 2014, was approved today ahead of approval by the lower house Chamber of Deputies tomorrow.

The opposition is voting against the measure but has said it will not present amendments or carry out any filibustering tactics in a sign of responsibility to overcome the crisis.

Bond markets have targeted Italy, the euro zone’s third largest economy, because of doubts about its ability to sustain one of the world’s heaviest debt burdens and fears it is getting sucked into a widening debt crisis.

The political consensus on debt-cutting measures helped calm nervous markets, which picked up after suffering heavy losses last week and early this week.

A sell-off on Tuesday sent yields on 10-year Italian bonds to a record 6 percent and banking stocks downwards before recovering.

The Democratic Party (PD), the largest opposition group, has demanded the resignation of Berlusconi’s government, saying it is too weak to face up to the storm on financial markets.

But instead of aiming for traumatic early elections immediately, the PD and other opposition forces have floated the idea of a transitional government to lead the country to the scheduled elections in 2013.

Berlusconi, who has steadfastly refused to resign despite a sex scandal and corruption trials, has emerged from this week’s financial crisis bruised.

He was roundly criticised for remaining silent on the financial crisis for days before making a statement on Tuesday. 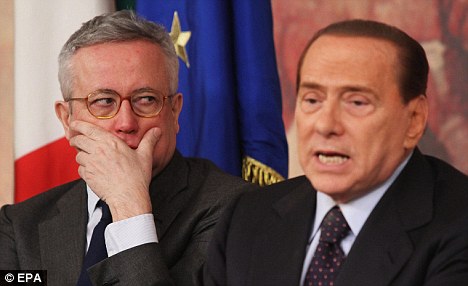 Economy Minister Giulio Tremonti, on the other hand, won praise from the markets for abandoning a European Union meeting to return to Rome to shepherd the austerity package’s fast-track treatment.

Seen by international investors as a guarantor of Italy’s financial stability, Tremonti’s position appears to have been strengthened by the crisis of the past few days, even as his already tense personal relations with Berlusconi have worsened.

The opposition has demanded that Berlusconi play no role in any transitional government and Tremonti has been touted by some as a possible key member, perhaps even as prime minister. 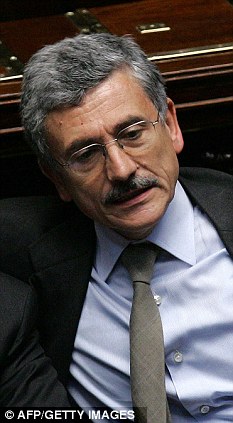 Massimo D’Alema, a former prime minister and currently an opposition leader, told the economic newspaper Il Sole 24 Ore the PD was willing to support a transitional government whose aim would be to weather the financial crisis, spur growth and make changes in the county’s electoral laws.

According to the text of an amendment to the austerity package, the government will approve ‘one or more programmes for the disposal of state shareholdings’ by December 2013.

Late on Wednesday, he held talks on amendments on issues ranging from pensions to health care but no serious impediment to an accord was anticipated.

Italy has avoided the worst of the financial crisis thanks to strong controls on public spending, a conservative banking system and a high level of private savings.

But with Greece and Ireland both in trouble, markets have been unnerved by a public debt level that is among the highest in the world at 120 percent of gross domestic product.

The market drop on Friday and Monday wiped about 26 billion euros ($37 billion) off the FTSE MIB blue-chip index and sent Italian bond yields up to more than 6 percent, the highest seen since the launch of the euro more than a decade ago.

A further test of Italy’s ability to keep tapping the markets will come on Thursday, when the Treasury offers up to 5 billion euros of long-term BTP bonds. Markets are waiting nervously to see how the auction succeeds.