Italy’s premier-designate has told the president he has been unable to form what would have been western Europe’s first populist government.

A presidential palace official said that Giuseppe Conte ‘has given back the mandate’ to try to form a government that President Sergio Mattarella gave him four days earlier.

Mr Conte said he tried his hardest to form the country’s next government and had full cooperation from would-be coalition partners, the populist 5-Star Movement and League parties.

The University of Florence law professor said he ‘gave the maximum effort, attention, to carry out this task with the full collaboration’ of the 5-Star Movement and League.

Mr Conte, who has no political experience, received the mandate last week from the pro-European Mr Mattarella.

Assembling a Cabinet acceptable to both Mr Mattarella and the populist partners foundered on League leader Matteo Salvini’s insistence on a Eurosceptic economy minister.

League leader Matteo Salvini tweeted on Sunday that he would keep fighting ‘to the end’ for the anti-euro candidate he wants to be the minister.

Paolo Savona has likened Italy to being in a ‘cage’ of austerity restrictions favoured by fellow eurozone member Germany.

After inconclusive March 4 elections, they proposed Mr Conte as their choice to lead the next government. 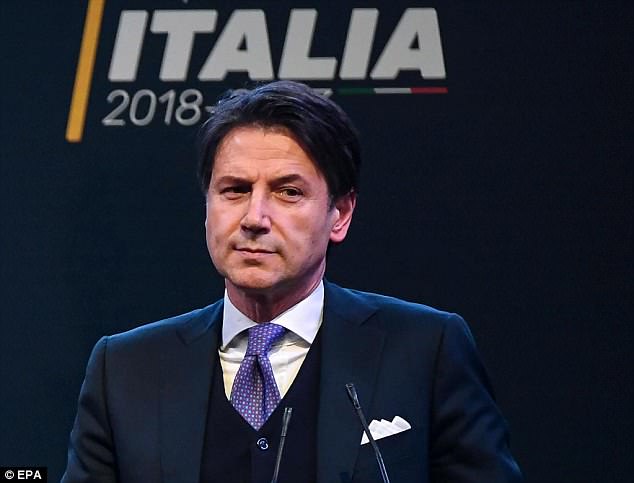 Mr Conte (pictured) who has no political experience, received the mandate last week from the pro-European Mr Mattarella, but talks failed