Italy threatens to withdraw EU cash unless others distribute migrants

Italy last night threatened to pull the plug on billions of pounds of EU contributions if the bloc does not step in to distribute more than 150 migrants being held in a Sicilian dock.

A row has been brewing over migrants aboard the Diciotti coast guard vessel in recent days, sparking an emergency meeting between diplomats today who will discuss the bloc’s asylum policy.

Those aboard the vessel, which arrived on Monday night, are being refused permission to disembark in Catania unless other member states agree to take some of those on board. 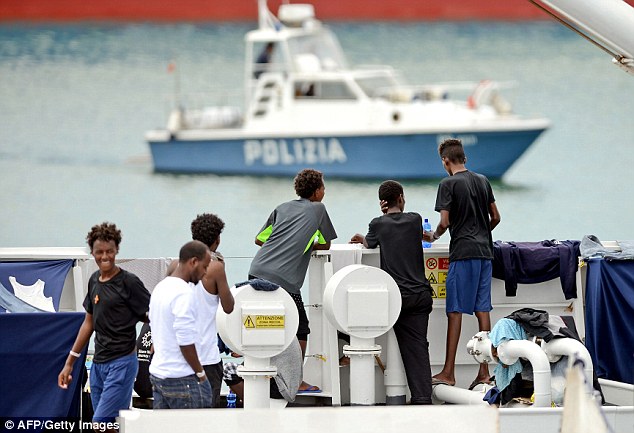 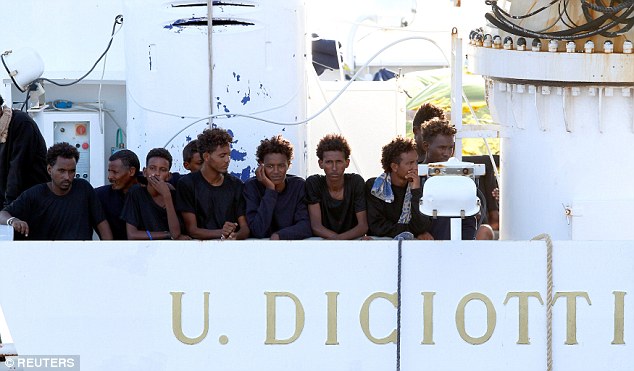 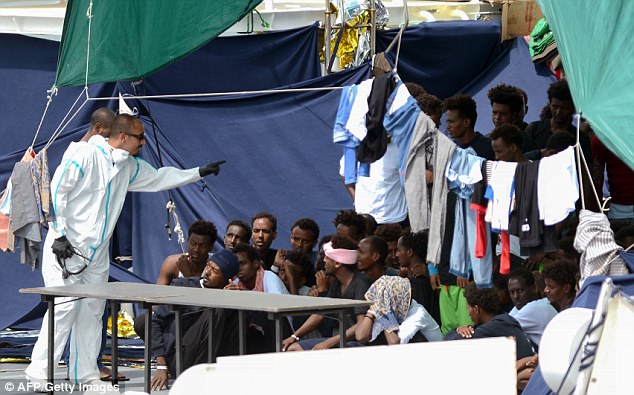 Italy’s interior minister, Matteo Salvini, earlier this week demanded the mostly Eritreans be redistributed across member states in a ‘spirit of solidarity’ or be sent back to Libya.

But in a dramatic escalation last night the country’s deputy prime minister, Luigi Di Maio, said his 5-Star Movement party would vote to suspend funding to the European Union next year unless other countries stepped in.

His anti-establishment party is the largest and in coalition with Mr Salvini’s far-right League party. 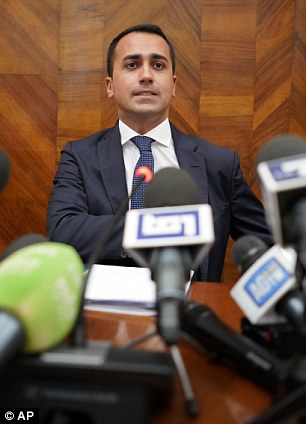 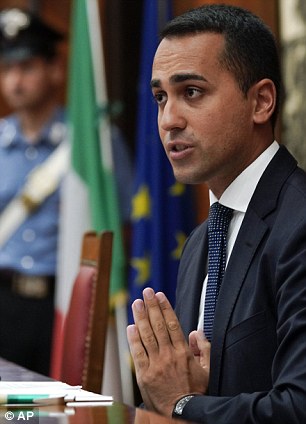 Deputy prime minister of Italy, Luigi Di Maio, pictured here talking to reporters during a press conference, in Rome, on Thursday, has fired a sharp warning to other EU member states

‘If tomorrow nothing comes out of a European Commission meeting on redistributing migrants from the Diciotti ship, the 5-Star and I will not be willing to give 20 billion euros each year to the EU,’ Mr Di Maio said in a video posted on Facebook.

Italy’s new populist government, which came into force in June, has proven to be a thorn in the side of Brussels over migration.

It has already forced EU leaders into a marathon all-night summit over the issue at the end of June which threatened to topple German Chancellor Angela Merkel amid discontent among her own coalition partners over the issue.

It has declared its ports closed to ships carrying migrants and last month forced the Aquarius vessel carrying more than 600 to dock in Valencia, Spain.

Just days later five countries – Spain, Portugal, France, Germany and Malta – agreed to take in 50 migrants each of 450 aboard two Frontex vessels which arrived at Italy’s ports after Prime Minister Giuseppe Conte called on other countries to step in.

A spokesman for the European Commission, which is responsible for the disbursement of EU funds, yesterday confirmed today’s meeting between officials.

They said: ‘We continue working towards a swift resolution so that the people on board can be safely disembarked as soon as possible.

‘For us, this is first and foremost a humanitarian imperative, we are talking about people here. 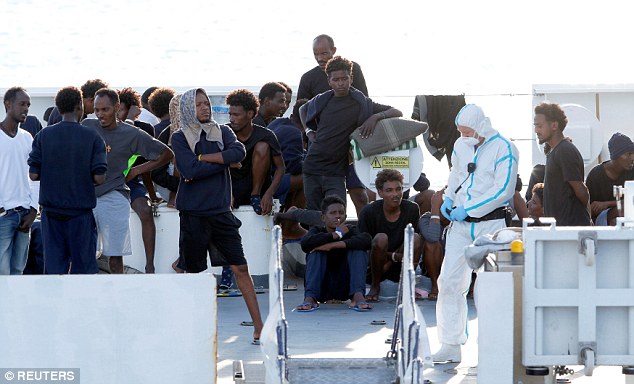 Those aboard the vessel (pictured), which arrived on Monday night, are being refused permission to disembark in Catania, Sicily 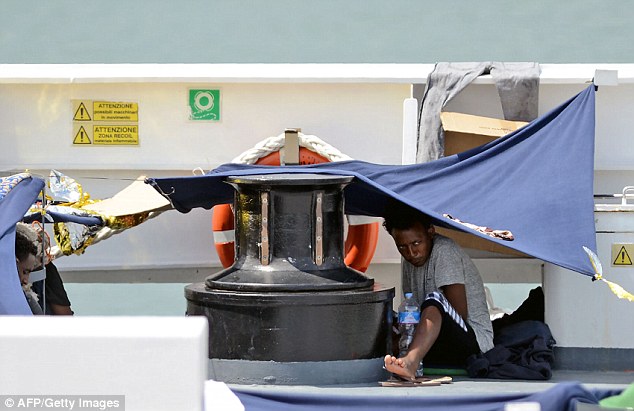 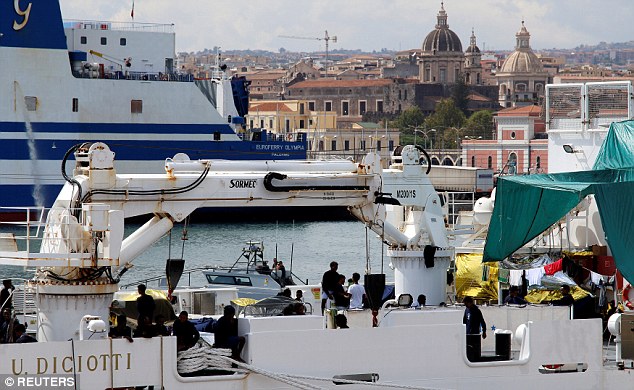 ‘We are stepping up our proactive work to finding a long term durable European solution and it’s in this context that [a meeting between diplomats] has been called for Friday. The purpose of this meeting is to discuss a common EU approach and the way forward towards a sustainable solution.’

The Diciotti fiasco has led to accusations of possible kidnapping for forcing the migrants to remain on the vessel.

The chief prosecutor from the Agrigento court, Luigi Patronaggio, boarded the vessel and said afterwards he had opened a probe against ‘unknown’ persons for holding the migrants against their will.

In the face of the accusations Mr Salvini last night remained defiant.

In a radio interview he said: ‘There’s a court that is investigating whether those illegally on board the ship have been kidnapped. 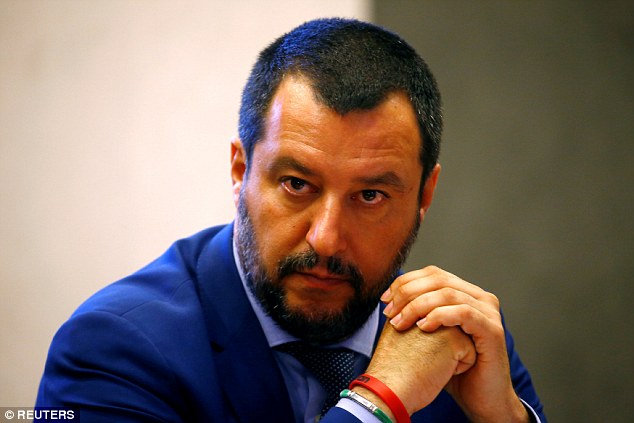 Italy’s Interior Minister Matteo Salvini looks on during a news conference in Rome, the politician has been very outspoken about immigration

‘I’m not unknown. My name is Matteo Salvini…I’m the Interior Minister and I think it is my duty to defend the security of this country’s borders.’

Italy says it has been forced to take in too many people since the height of the migration crisis in 2015.

Since then it has taken nearly 500,000 who have crossed the Mediterranean.

However, the numbers have dropped significantly, with only 19,303 arrivals by sea this year compared with 119,369 for the whole of last year.

In 2016, 181,436 arrived in Italy, according to figures from the International Organisation for Migration.

Amid the country’s hardline stance Spain last month overtook Italy as the most popular country for migrants to reach.