Italy is considering imposing a nationwide 10pm curfew and closing all high schools due to a sharp rise in Covid infections.

The country reported its highest ever daily toll of infections on Friday, with more than 10,000 people contracting the deadly virus in one day.

Authorities are meeting on Sunday evening to discuss new measures which could include the closure of cafes, cinemas and restaurants as well as lockdown measures. 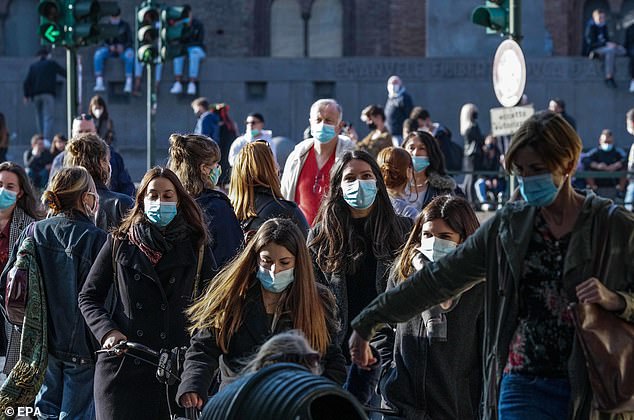 The country reported its highest ever daily toll of infections on Friday, with more than 10,000 people contracting the deadly virus in one day

Football matches, at both professional and amateur level, are expected to be banned, with only essential travel allowed, according to The Telegraph.

The national measures will form a baseline and regional governments can then add further restrictions if they are seeing an ever greater local rise in cases.

Lombardy, which became the global epicentre of the virus back in February, has seen a surge in cases, with more than 2,000 infections a day.

Intensive care units are already under strain and alcohol sales have been limited, contact sports banned and bingo parlors closed to help stem the infection. 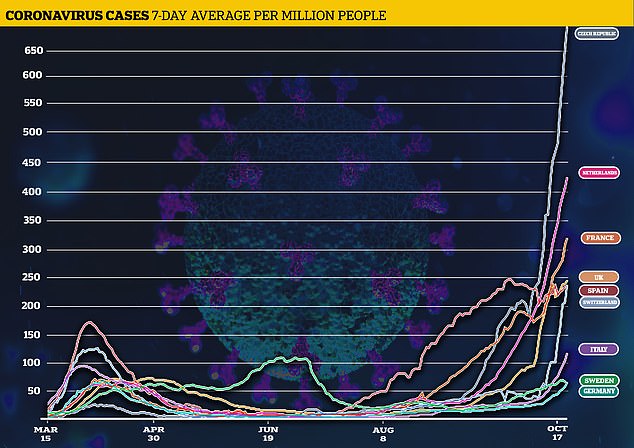 Under new measures, only table service is available at bars from 6pm and drinking has been banned in public places.

Campania, which is also suffering similarly high infections, has shut down schools for two weeks.

The Vatican has confirmed that someone who lives in the same hotel as the Pope has tested positive, as well as 11 of the Swiss Guard who protect him. 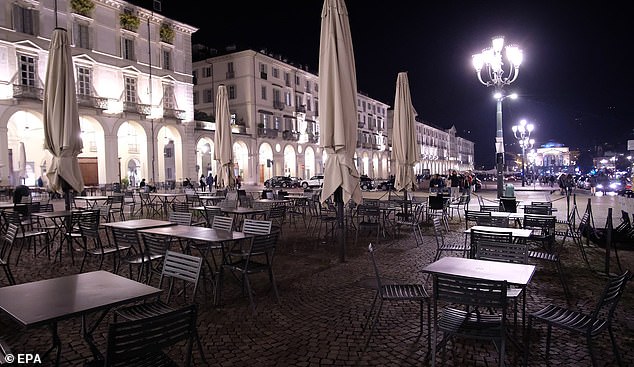 Many restaurants, bars and cafes in Italy are under strict new rules to limit contact between people

It comes as countries across Europe are seeing a surge in case numbers, prompting new restrictions.

In Germany, 7,840 cases were reported on Saturday, a new record.

By European standards, Germany has experienced relatively low infection and death rates so far during the pandemic, but Chancellor Angela Merkel has warned there could be 19,200 infections per day if current trends continue. 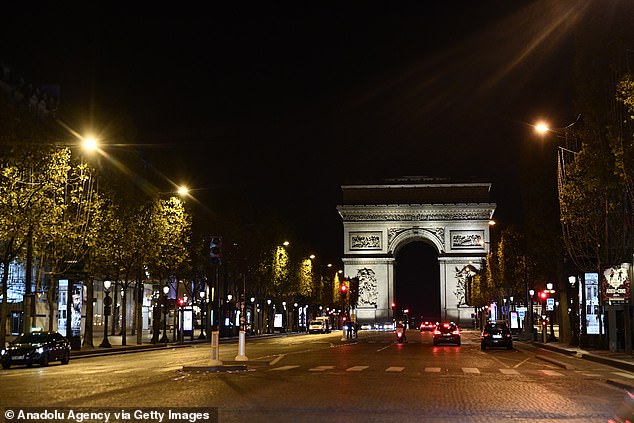 The Champs-Eylsées lies virtually empty after curfew was imposed in Paris, forcing places shut by 9pm

Meanwhile in France, which is currently experiencing the highest number of cases, 12,000 extra police officers have been deployed to enforce new lockdown rules.

In the past seven days it has registered nearly 142,800 new infections, more than the 132,430 registered during the entire two-month lockdown from mid-March to mid-May.

In Paris and eight other cities, restaurants, bars and cinemas have to close by 9pm in an effort to reduce contact. 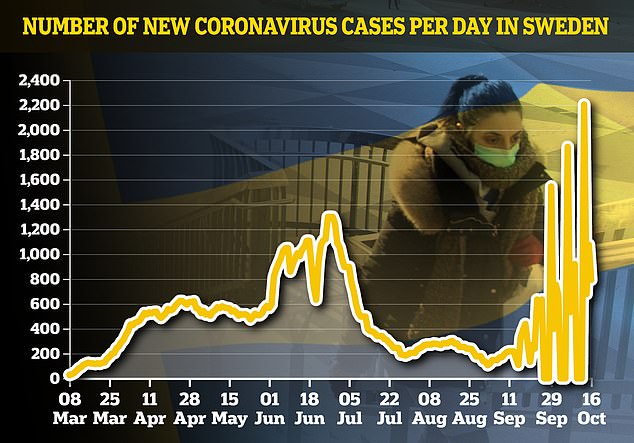 A graph showing Sweden’s daily reported coronavirus cases since the start of the pandemic, which have been rising in recent weeks after a sustained fall

Meanwhile, in Sweden, authorities are bringing in local lockdowns in a new move for the country which had so far resisted harsh measures.

The Scandinavian country was a talking point during the pandemic for its resistance to imposing a national lockdown like its European neighbours.

In Prague, Czech police have used tear gas and a water cannon to disperse hundreds of violent protesters who attacked them. It came after a rally against government restrictions to slow the spread of coronavirus infections. 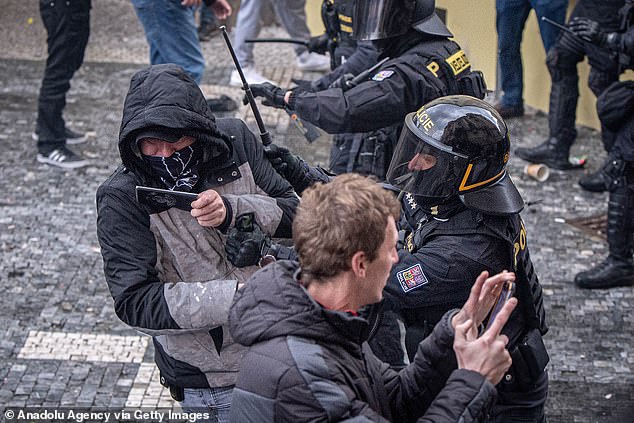 Protesters against the novel coronavirus (Covid-19) measures clash with police in Prague, Czech Republic on October 18 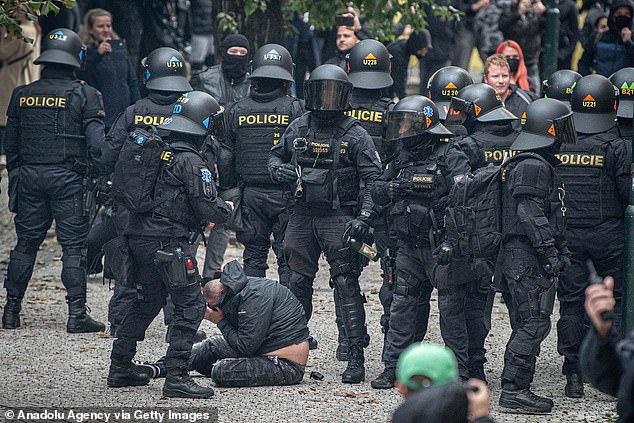 : Protesters against the novel coronavirus (Covid-19) measures clash with police in Prague 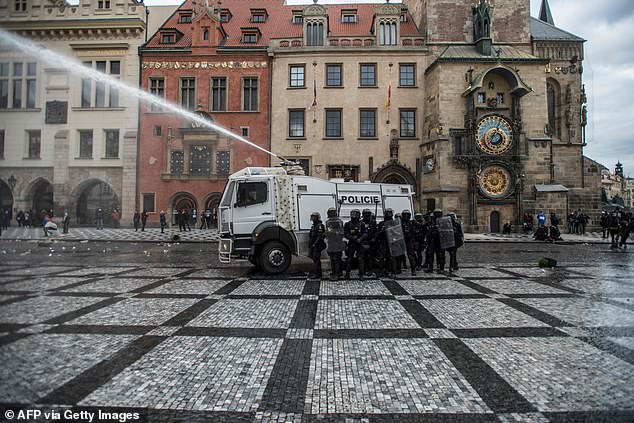 Riot police use water cannon against protestors at the Old Town Square as hundreds of demonstrators, including football supporters, protest against the Czech government’s new measures to slow the spread of the coronavirus

The Czech Republic is under partial lockdown closing schools, bars and clubs until November 3. With 1,106 deaths from Covid-19, the country has reported 55,538 new cases in a fortnight.

Europe currently has recorded over 17 per cent of total global coronavirus cases and nearly 22 per cent of deaths worldwide.

As a region, Europe is reporting more daily cases than India, Brazil and the United States combined. The increase is partly explained by far more testing than was done in the first wave of the pandemic.