Italy will be hit by a more deadly second coronavirus wave as it eases lockdown, according to a sobering report from Imperial College London.

Researchers modelled how the virus would spread in three scenarios – if the nation stayed in quarantine or if Italians increased their movements by 20 per cent and 40 per cent.

Even if Italians went back to just 20 per cent of their normal routine, it would spark a surge in deaths bigger than the first wave, which has so far killed 30,000 people.

If mobility returned to pre-lockdown levels by 40 per cent, there could be an additional 23,000 deaths, the report found.

The researchers admit their bleak predictions are pessimistic as they do not factor in preventative measures.

But they say their findings highlight the need for contact tracing apps, social distancing and mandatory mask-wearing when the country lifts its restrictions.

It comes during the week that Italy enters ‘phase two’ of its lockdown after almost two months.

Millions of Italians have been allowed to return to work at factories and contraction sites, public parks have opened up for exercise and families have been reunited.

If 40 per cent of the population in Lombardy, the worst-hit region in Italy, were allowed to return to normal, deaths (in red) would initially continue to drop before rising sharply within eight weeks 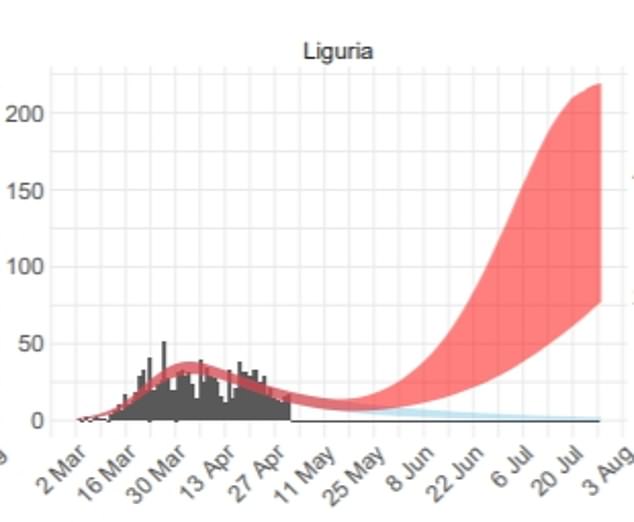 Liguria, in northwest Italy, has managed to get through the current crisis without reporting more than 100 deaths a day. But it would be bombarded with fatalities if lockdown was lifted and no preventative measures were in place

Piedmont, located next to Milan, and Tuscany would also face steep increases in COVID-19 deaths 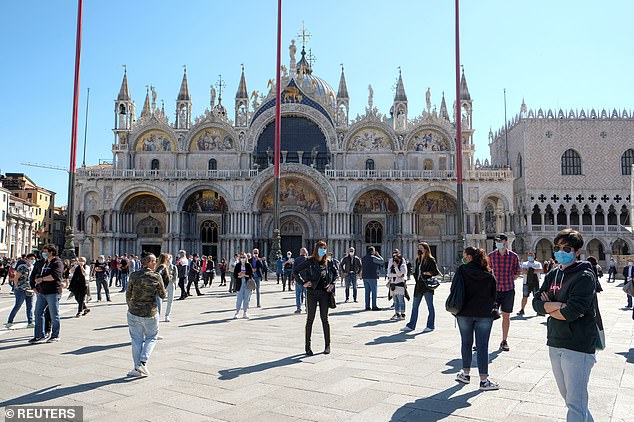 It comes millions of Italians return to work at factories and construction sites, and public parks open up after almost two months for people to exercise. Pictured: People gather in front of St Mark’s Basilica in the centre of Venice on Monday 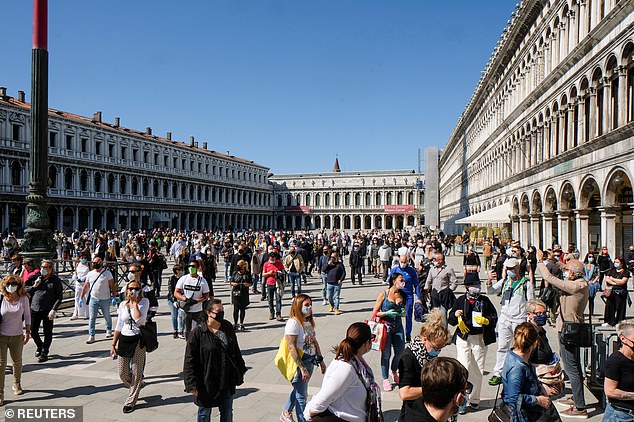 Venice’s St Mark’s Square was full of people again, including a rally staged by local traders, weeks after empty Venice became one of the early symbols of the coronavirus crisis in Europe

Italy surpassed China to become the epicentre of the pandemic in early March after an explosion of cases in its northern Lombardy region.

But the country managed to slow the spread after imposing one of the strictest draconian lockdowns seen on the continent on March 9.

The Government shut parks and only allowed people to venture within a few hundred metres of their door for essential exercise or food shopping.

Italians faced questioning, fines and even prison sentences if they were found outdoors without valid reason.

The country has suffered just under 30,000 deaths and is now reporting less than 100 fatalities a day as the outbreak fizzles out.

Britain, where restrictions have been more lenient, is now bound to overtake Italy as the worst-hit country in Europe as it is still reporting hundreds more deaths every day and its total is nearly 29,000.

The Imperial researchers used mathematical modelling to simulate COVID-19’s spread eight weeks into the future in all regions of Italy.

They found that if the country stayed in lockdown there would be a continued reduction in deaths. 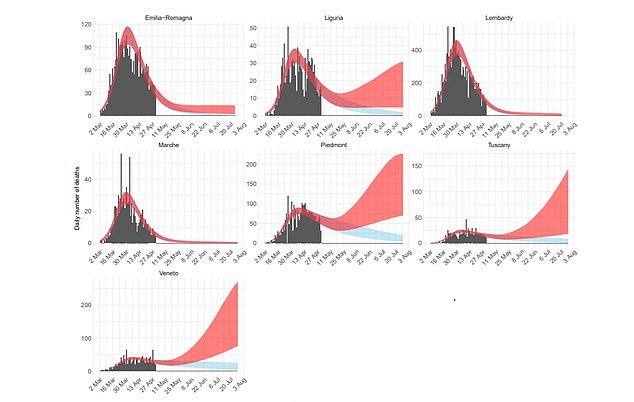 How outbreaks would look if a fifth of Italians resumed normal life in the seven worst-hit regions in Italy. Deaths are shown in red, for 20 per cent mobility, and blue, if the current lockdown stayed in place 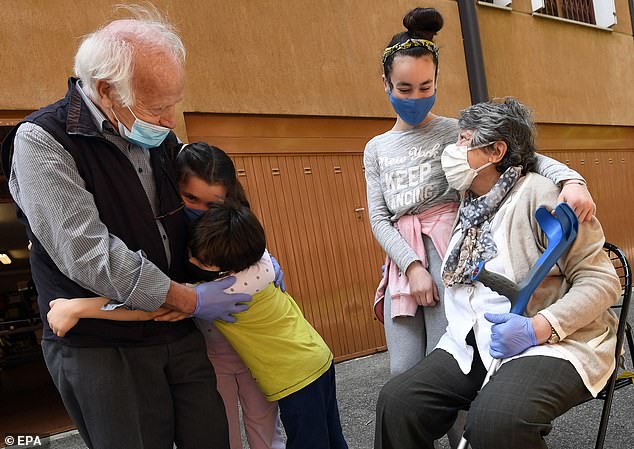 Family reunion: Melia Famoso (right) and her husband Giovanni (left) hug their grandchildren for the first time in two months in San Donato Milanese near Milan today, with Italians allowed to visit their relatives again 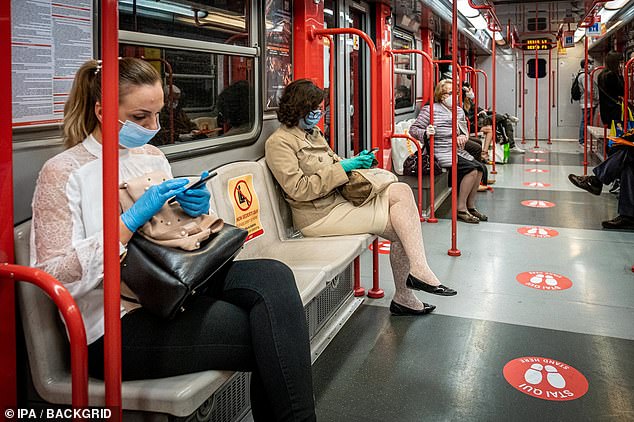 People wearing masks sit on an underground train in Milan, with a 3ft safety distance marked out on the carriage floor

Italy’s new rules for ‘phase two’ of the lockdown

Italy has now started to lift its near-two-month lockdown.

Previously, Italians were only allowed to venture within a few hundred metres of their door for essential exercise or food shopping.

People faced questioning, fines and even prison sentences if they were found outdoors without valid reason.

Restrictions are now starting to be eased and Italians are allowed to leave for:

WORK: Manufacturing and construction resumed on May 4, allowing an estimated 4.4million people to return to work, but many businesses are still closed.

SHOPS: Most non-essential shops are still shut. However, a small selection including bookstores and children’s clothes stores opened on a trial basis during the lockdown, and bicycle dealers are expected to be added to that list ‘very soon’.

BARS AND RESTAURANTS: Can now open for takeaway services only.

MEETING FAMILY MEMBERS: People are now allowed to leave their homes to ‘visit relatives and other loved ones’, but not friends. They will have to wear masks and ‘big family gatherings’ are not permitted.

TRAVEL: People are still banned from travelling outside the region where they live. There is an exception for students and workers who were marooned in a different region when the lockdown began, if they now want to return home. Regional authorities are responsible for ensuring social distancing on public transport.

PARKS AND EXERCISE: Parks have re-opened for jogging and exercise, although children’s playgrounds are still closed. People are allowed to drive somewhere to take exercise there.

UNIVERSITIES: Can hold exams and degree ceremonies if social distancing is respected. Laboratories can also re-open.

FUNERALS: Up to 15 mourners are now allowed to gather for a funeral, but must wear masks.

But if Italians were to resume their normal pre-lockdown routines by 20 per cent, then a second outbreak would kill an extra 3,700 and 5,000 people, the report found.

It is not clear in the report how the second wave would eclipse the current death toll of 30,000.

MailOnline has approached the researchers for clarity.

The scientists say the reason deaths would rebound to such a large extent is driven by a large number of ongoing infections in the worst-hit parts of the country.

If more time is spent under current lockdown before easing restrictions, then infections will continue to fall and deaths ‘is likely to be considerably lower in both scenarios’.

Writing in the paper, which has not yet been published or scrutinised by other scientists, the researchers said: ‘When simulating future scenarios we have not accounted for the impact of social distancing measures in public transport and public space, alongside the mandatory use of personal protective equipment (PPE).

‘The cost benefit trade off between the implementation of new interventions and the relaxation of current NPIs [restrictions] is unknown, and will depend on the effectiveness of this new set of interventions, behaviour, adherence to the recommendations and the correct use of the personal protective equipment.

‘Given that interventions, such as extensive testing, contact tracing and social distancing are going to be implemented, our estimates can be viewed as being pessimistic.

‘On the other hand, simulating 20 per cent and 40 per cent increase in mobility over the next eight weeks is likely a conservative scenario. Our model uses the official deaths counts to estimate changes in transmission intensity.

‘As more information on new interventions are introduced we will include them in our modelling framework. ‘

Commenting on the findings, Dr Thomas House, a reader in mathematical statistics at the University of Manchester, said: ‘Italy is the European country that experienced the earliest surge in COVID-19 cases and as such it is important to follow the situation there closely.

‘This paper quantifies the extent to which non-pharmaceutical interventions have worked, and reflecting the uncertainty in what will happen considers multiple scenarios that might hold as they are relaxed.

‘This study is applicable to the UK, since the authors correctly recommend that the situation is closely monitored as aspects of lockdown are relaxed, and do not try to predict the future exactly but rather present scenarios that may plausibly be realised depending on how this process actually develops.’

It comes as Italians were back on the streets this week as the country lifted the longest lockdown in Europe and entered ‘phase two’ of the coronavirus crisis.

In Venice, where the empty streets and alleyways were an early symbol of the crisis in Europe, St Mark’s Square was full of people again today as local traders gathered in the piazza.

Trains and platforms were busy again in Milan with more than four million people expected to return to work at factories and construction sites, while others can exercise in parks and visit relatives for the first time in weeks.

Italy’s Government says the regions are responsible for ensuring social distancing on public transport, but some pictures suggested it was not being strictly enforced.

Italy’s move into ‘phase two’ today follows only 174 deaths on Sunday, the lowest figure since the lockdown went into effect on March 10, although that came after a spike of 474 deaths on Saturday.

Italy’s R rate – the number of people that each person infects – has fallen below 1, a threshold which is widely seen as crucial to bringing the epidemic under control.

Health officials say the figure was as high as 3 at the height of the crisis in Lombardy, which became one of the early virus hotspots in February and March.

Prime minister Giuseppe Conte has announced a staggered re-opening from today, although some regions are moving at different speeds.

The nationwide rules for ‘phase two’ say that bars and restaurants can resume takeaway services while building sites and factories are allowed to resume production from today.

People are allowed to visit their relatives, although not their friends, and only within the region where they live.

Masks are compulsory on public transport, with regional governments put in charge of ensuring social distancing – and some of them are requiring gloves.

Parks have re-opened for jogging and exercise, although not playgrounds, and people are required to observe the 3ft ‘spacing’ guidelines. Meanwhile, gatherings of 15 people are now permitted for funerals.