It’s a far cry from Dubai! A review of the Anantara Al Jabal Al Akhdar Resort in Oman

‘What you have to understand,’ a fellow guest says to me, ‘is that Oman is the Scotland of the Middle East.’

We are on the Jabal Akhdar with vultures circling around us. The view below is a vast canyon of steep precipices and gorges mixed in with tiny villages clinging to the cliff side, surrounded by terraces cut into the rock. With a cloudless sky, the air is desert-dry. We are 6,900ft above sea level.

The scenery is breathtaking and indeed every bit as dramatic as the Highlands of Scotland. For those who want to holiday in the Middle East without being overwhelmed by bling, Oman offers a serene (and safe) alternative to the brash opulence of the more popular destinations of, say, Dubai.

In 1986, Prince Charles and Princess Diana flew by helicopter to this spot to spend the day in glorious isolation. Did it remind the Royal pair of Balmoral? Thirty years on, there’s a luxury hotel here and the view has been accessorised with a palatial spa, fountains and gardens, cocktails and gourmet food.

The guests are an intriguing blend, including Western expats from the UAE in search of temperate temperatures – Dubai is a five-hour drive away – as well as Middle Eastern families.

The Royal picnic spot has become a terrace with a glass balcony, sofas and a firepit, while a cocktail trolley is wheeled out for sunset when the mountains turn a rosy pink.

The hotel has also thoughtfully provided blankets, because you could say that the temperatures veer towards the Scottish; it’s always about 15 degrees lower here than in the capital, Muscat. A combination of sunglasses and down jackets is the sartorial norm.

The hotel even has its own via ferrata, which Sarah Turner says is a ‘terrifying but safe abseiling and zip lining route that takes daredevil guests between the crevices and, after a couple of hours clinging to the rock face, they pop out by the infinity swimming pool (seen above)’

The scenery is dramatic but the atmosphere is calm. Oman’s citizens – all 4.6 million of them – belong to the gentle Ibadi practice of Islam. Oman has oil, but it’s always been one of the most understated parts of the Middle East, with strong links to Britain. And, two hours from Muscat, Jabal Akhdar feels delightfully remote.

As billets go, the Anantara is very luxurious, with 82 rooms that face the cliff, full of power showers and kingsize beds and quietly opulent Middle Eastern decor. Oman is famous for its marble and there’s plenty of it on display. There are also 33 villas for families and the privacy-minded; the most drool-worthy have private pools.

An enjoyable blend of glamour and lycra-based activity, this is a hotel with its own via ferrata, a terrifying but safe abseiling and zip lining route that takes daredevil guests between the crevices and, after a couple of hours clinging to the rock face, they pop out by the infinity swimming pool.

Even the milder adventures have a certain heartiness; a two-hour walk between a series of deserted villages involves rock scrambles and balancing along narrow waterways – top tip: don’t try to do it in a maxi dress. 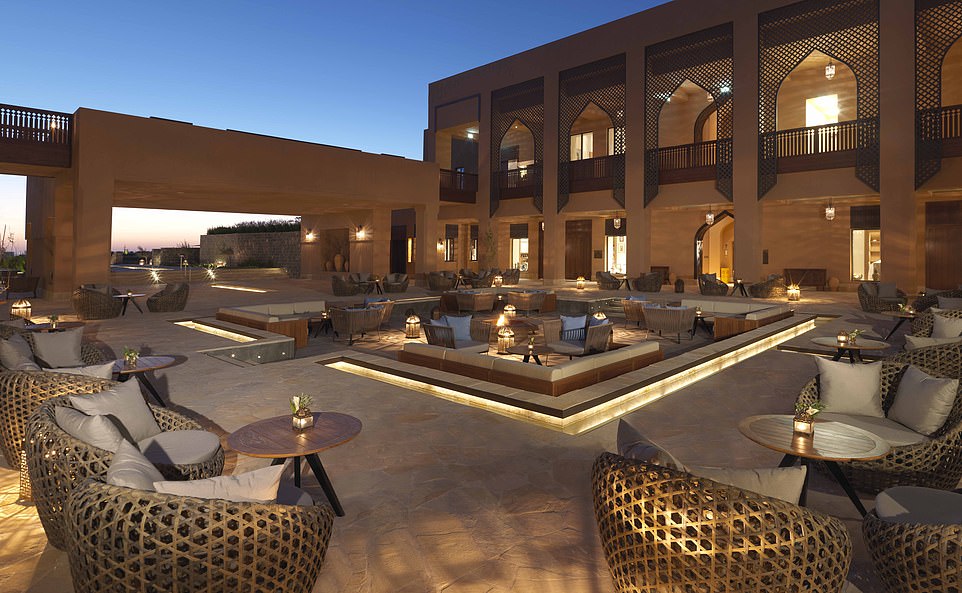 A courtyard at the Anantara Al Jabal Al Akhdar Resort, which is owned by the Oman army’s pension fund 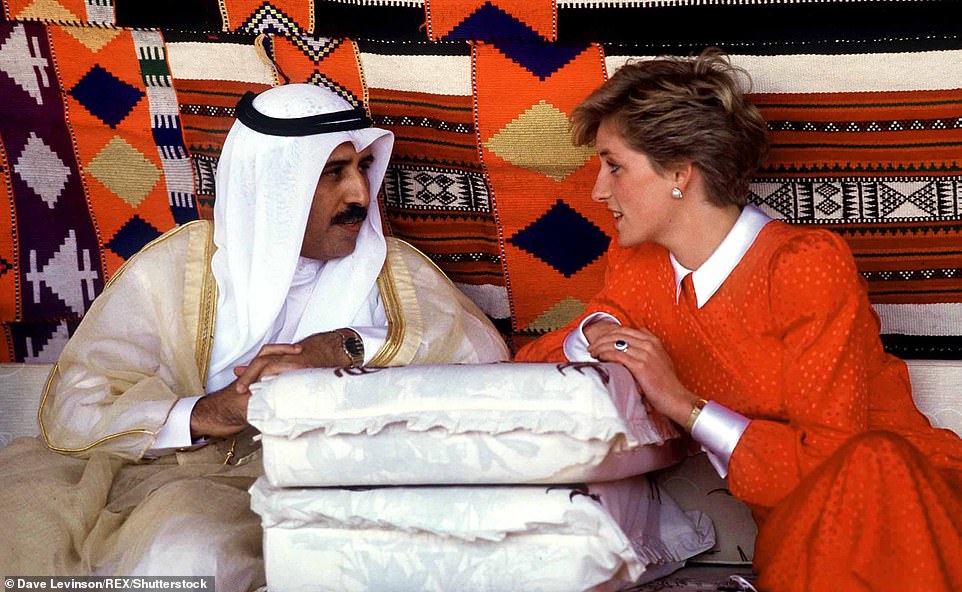 Royal visit: Princess Diana in Oman in 1986. She flew by helicopter to spend the day in the mountains with Prince Charles

But it’s worth it. We walk in the middle of steep terraces used by farmers to cultivate roses which have an intensity of scent that’s famous.

We also see walnut and pomegranate trees, a reed-fringed spring and, as we inch around a rock with a sheer fall below, a tiny waterfall, fed by the short period of rain that usually comes in February or March.

In the 1950s, the children who lived here faced a three-hour climb to get to school. But only a handful of people live in the villages these days. Most have built new homes in the hills above the hotel, but come back to farm the land. ‘It’s a part of us,’ says Said, a local who now works for the hotel.

The ancient houses are still there, with mud walls and beams made from juniper wood. Amid a maze of passageways, the odd cat and goat soak up attention.

Jabal Akhdar translates as Green Mountain, but the terraces are looking a bit parched, despite an ingenious water canal irrigation system called falaj that the farmers use and which has been developed over centuries. The local imams still decree when water can be used. A desalination plant is being built to help the farmers, and I feel a little guilty about the hotel’s fountains.

Back at the hotel, on Diana Point, as it is known, I fall into conversation with Andrew Bickerdike, who lived in Oman in the 1990s when he served with the Sultan’s armed forces and was back on Jabal Akhdar for the first time since then. 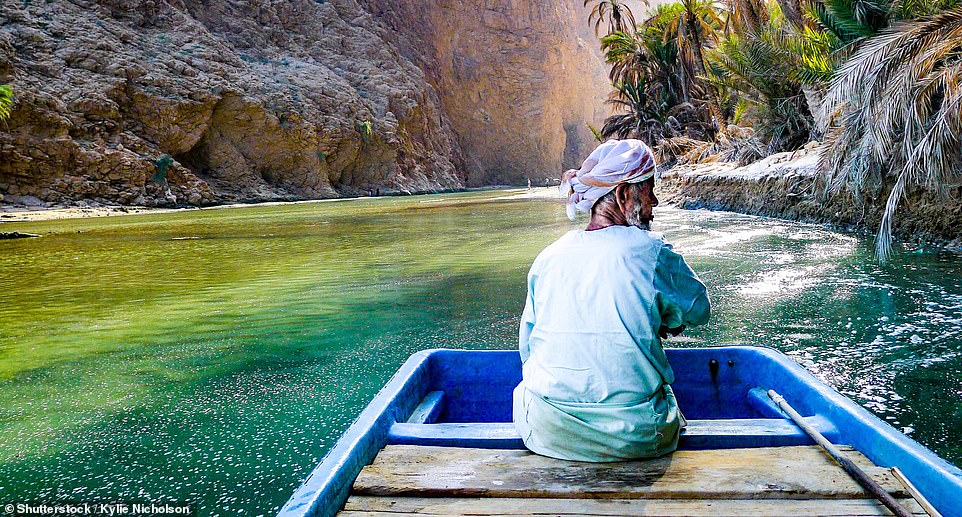 Cool trip: An Omani steers his boat down the river at the entrance to the dramatic Wadi Shab canyon 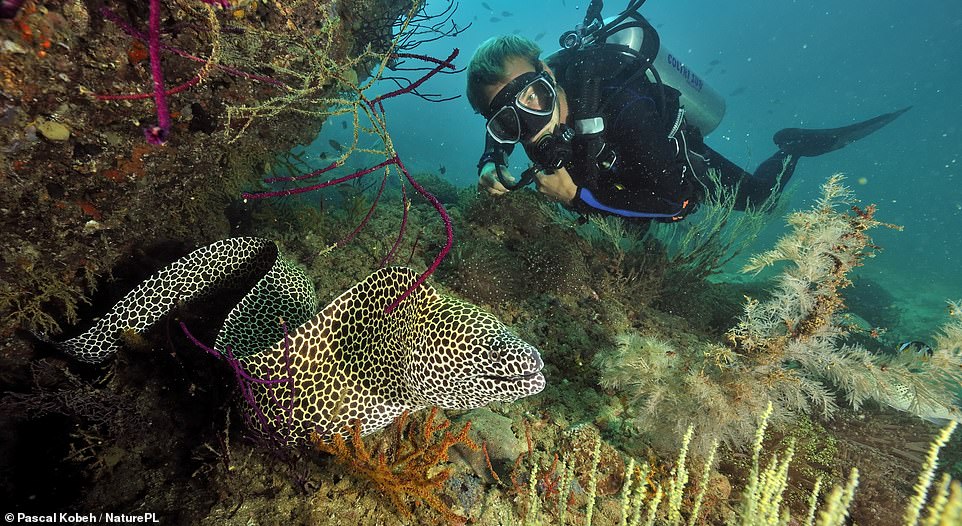 Undersea world: A shot of what to expect when diving off the Daymaniyat Islands near Muscat

Return flights from London to Oman with Oman Air (omanair.com) start from £420 in economy.

He says: ‘Getting up here on the small local tracks took the best part of a day back then. I even pitched a tent there with an air-mattress.’

He points to the rocks below, just by the swimming pool, and laughs.

So does his friend, Saada Al-Ghafry, an Omani educational technologist. They’d both camped up here with the Historical Association of Oman in the days when you needed to get permission from the army to visit the mountain.

Saada says: ‘Even then, water was scarce. We brought up all our own water, for the trip.’

Andrew adds: ‘Oman is such a special place. There’s nowhere like it in the Middle East.’

On our last morning, there’s a misty start to the day. As the hours pass, clouds occasionally wander by. By the early evening, the clouds get darker and finally, a few drops of rain turn into a downpour.

Instantly, you can tell who is Omani and who comes from the real Scotland.

Out on Diana Point, whole families are huddled under umbrellas in a state that seems to lie between gratitude and amusement.

‘We’ve never seen rain in Oman before,’ say a young Omani couple as they pull the hoods up on their puffer jackets.

1. Saunter round the maze of the souk

The bay called the Corniche is the heart of the oldest part of Oman’s capital, Muscat, and the Muttrah souk lies just off it. Here you’ll find a maze of passageways with stalls selling silks, spices and gold, as well as Omani antiques, including Bedouin jewellery. There are also cafes. Head into the streets behind and eventually you’ll reach Bait al Baranda, a museum charting Oman’s history, housed in one of Muscat’s oldest buildings. baitalbaranda.mm.gov.om

Ibra is the oldest city in Oman and holds a women-only souk every Wednesday. Pick up a bag of frankincense – the sap tapped from the Boswellia tree that grows in Yemen, Somalia and Oman, which is supposed to be the best in the world.

3. Take the aria at the opera house

Some Middle Eastern countries celebrate the shopping mall but Muscat sets more store by its opera house and its cultural programme that includes jazz and classical but concentrates on opera with a series of visiting companies. Even if you don’t come for Mahler, a tour to marvel at the architecture and decor is worth it. rohmuscat.org.om

Authentic Omani food is hard to come by but Ubhar, near Qurum beach, allows you to immerse yourself in traditional spiced fish, camel biryani and frankincense ice cream. Alcohol is available in larger hotels and some restaurants but it’s an offence to drink in a public place. Omani coffee is delicious, made with rosewater and usually served with dates. ubharoman.com/ubhar

A day trip from Muscat is the Hawiyat Najm Park. Here you’ll find the Bimmah Sinkhole – a miniature lake where tiny fish will give your feet a pedicure while you paddle. Further along the coastal path, a hiking trail along gorges and date plantations brings you to Wadi Shab, a series of rock pools that are perfect for cooling down in. Expect to take four to five hours to do the hike properly, and bring plenty of water and money for the short boat trip that takes you to the starting point.

6. An island adventure to see seahorses

Offshore from Muscat, the Daymaniyat Islands have beaches of white sand and the nutrient-rich waters are home to seahorses, manta rays and barracudas. The islands are a nature reserve but SeaOman can arrange day trips. seaoman.com

7. Watch rare turtles as they lay their eggs

On Oman’s eastern peninsula, Ras al Jinz is a turtle sanctuary. The best time of year to visit is June to August and numbers are tightly controlled, with 300 visitors a day – 100 in the morning, when you can often see the turtles return to the water after laying their eggs, and 200 in the evening when the turtles come ashore. There’s huge demand for tickets so you need to book in advance. However, the centre has some accommodation in cabins and tents which automatically includes access to the turtle tours. rasaljinz-turtlereserve.com

Many people ‘wild camp’ in Oman but Sharqiya Sands camp is worth a visit because it’s run by an Omani family. It’s simple – there’s no electricity– but well managed, with dinner provided. nomadicdesertcamp.com

9. Cruise on a Dhow and spot splashing dolphins

In the north, Khasab is a remote but beautiful part of Oman. A cruise in a dhow, the traditional wooden boat of the Middle East, allows you to experience the coastline, usually with dolphins playing alongside. Oman has more than 20 varieties in its waters. You can do trips overnight but you’ll see the area’s fjords – craggy cliffs amid turquoise waters – on a day trip. khasabtours.com

10. Go green during the summer monsoon

The countryside around Salalah in the far south of the country experiences a summer monsoon called khareef. Between July and September, a large amount of rainfall means that the countryside becomes a carpet of greenery. You’ll need to book accommodation in advance. alfawaztours.com