It’s DIY KFC! How to make the Colonel’s chicken at home

It has been less than a week since nearly all of KFC’s UK restaurants were forced to close due to a chicken shortage.

But it has felt like a life time to a nation of fast-food fans some of whom are so bereft police have had to warn them not to contact them.

Representatives from the company’s British headquarters are warning it could be up to another week until all 900 stores are back open for business.

But there is some light at the end of the tunnel for those in desperate need of their fix of the Colonel’s famous fried pieces.

Almost two years ago, it was believed the recipe for their famous chicken was revealed by Colonel Sanders’ nephew.

While the current owner of KFC, Yum! Brands, disputed the discovery, it was widely acknowledged as being the same list of ingredients used today.

With another seven days expected until the restaurants are open for business, fans will be able to have a go at making their own at home.

To find out how easy it is to follow the famous method from home, expectant mother Joanne Gould, 31, put the family recipe to the test…

The top-secret formula for KFC chicken has been found in an old scrapbook, it’s been claimed. Joanne Gould, 31, from Golders Green, London, decided to put the family recipe to the test 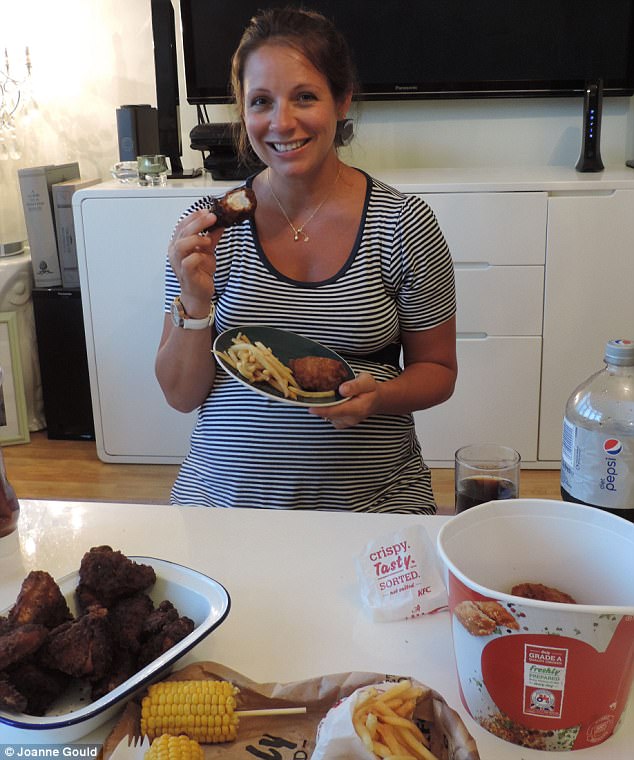 Joanne eats a home-made chicken drumstick using the alleged KFC recipe, comparing it to the piece of chicken she bought from a nearby KFC restaurant (on Joanne’s plate, above)

The famous recipe is said to have been kept in a vault since the 1940s, but now Joe Ledington, a nephew by marriage of Colonel Sanders, claims to have a handwritten copy of the original.

It was found in a scrapbook which was owned by Sanders’ second wife, Claudia Sanders, according to The Chicago Tribune.

There’s a plethora of fried chicken recipes out there – and many of them attempt to replicate the famous KFC style – but up until now I’ve not been hugely impressed so I’m excited to try this, potentially, original version.

I’m surprised at some of the ingredients and would never have guessed at including things like ground ginger, dried basil or such a large amount of paprika – whilst other spices are fairly obvious, like dried oregano, garlic salt and mustard powder. 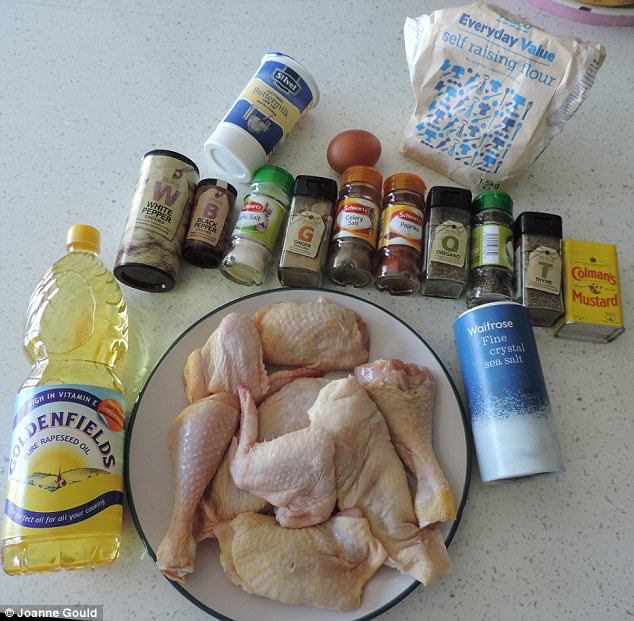 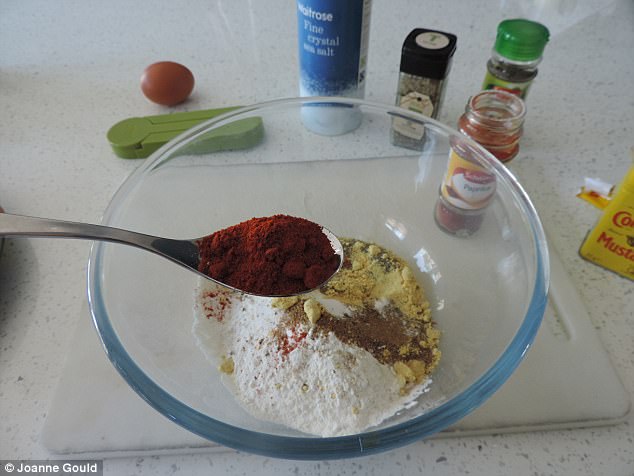 Joanne first mixed the herbs and spices with flour, before setting it aside 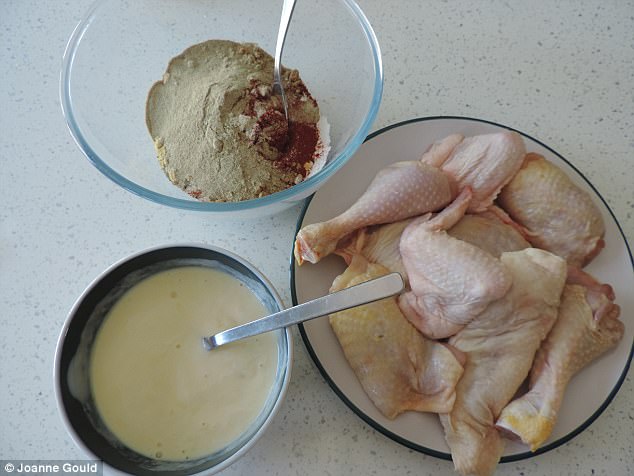 She then mixed the buttermilk and egg together in a separate bowl (above, left) until combined

After mixing the herbs and spices with flour in one bowl, I combine the buttermilk and egg in another.

I then soak the chicken – a mix of wings, thighs, drumsticks and breasts, halved – in this gloopy mix for 30 minutes before shaking off the excess batter.

Now it’s time to coat the chicken in the spice mix, which is a bit of a messy business. I leave the chicken to rest again for another 20 minutes or so on a wire rack. 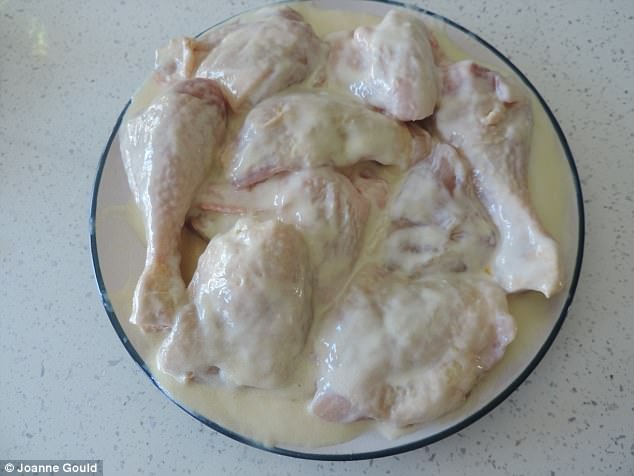 The recipe suggests soaking the chicken – a mix of wings, thighs, drumsticks and breasts, halved – in the mix for 20-30 minutes before shaking off the excess batter 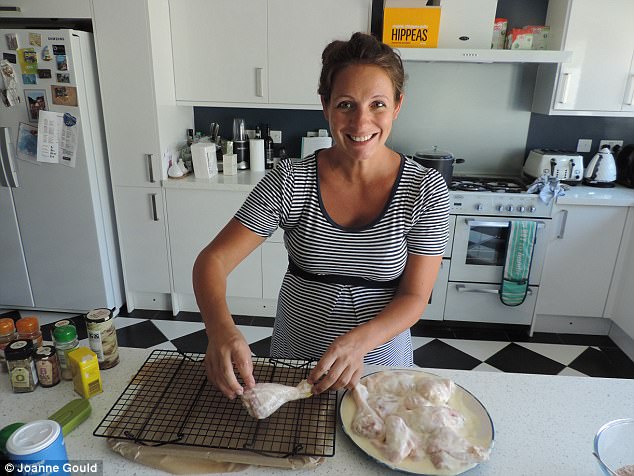 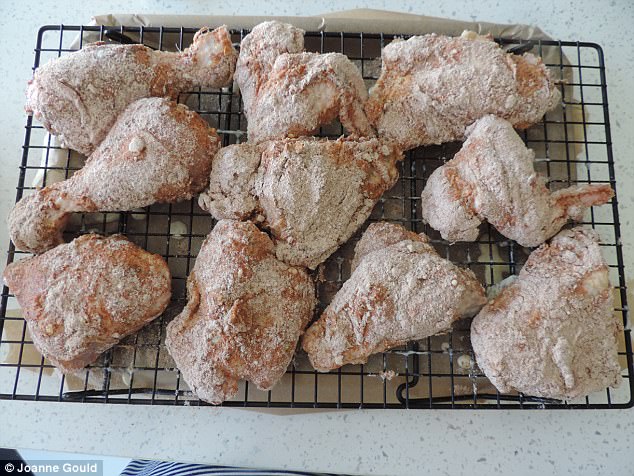 Before frying, allow the spice-coated chicken to sit on a rack over a baking sheet for 20 minutes

Using a large, high sided pan, I heat the canola oil to a specific 350F (about 175C) temperature.

There’s quite a bit of oil, so this takes a while, but then the first batch of chicken is ready to go in and be fried for around 15 minutes.

The chicken pieces need to be cooked in batches of three or four so as not to overcrowd the pan, so it takes a fair amount of time to get through my 10 pieces. 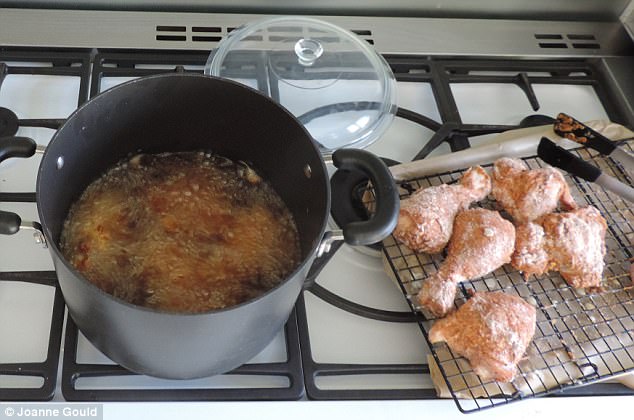 Using a large, high sided pan, canola oil is then heated to 350F (about 175C) temperature 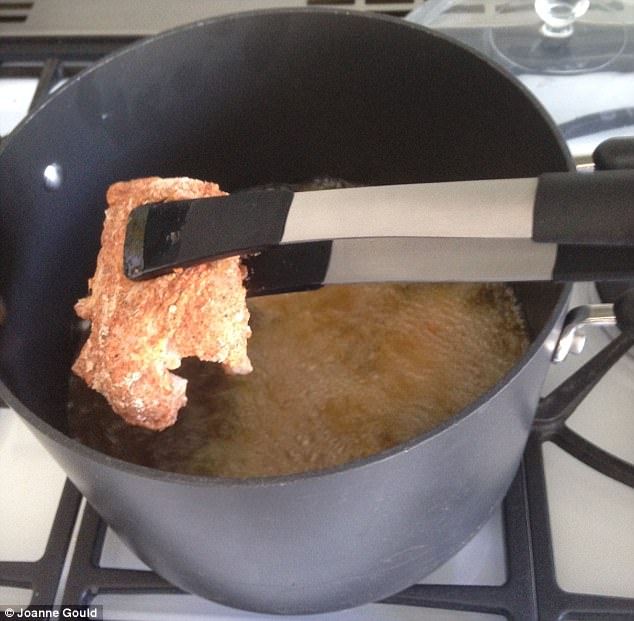 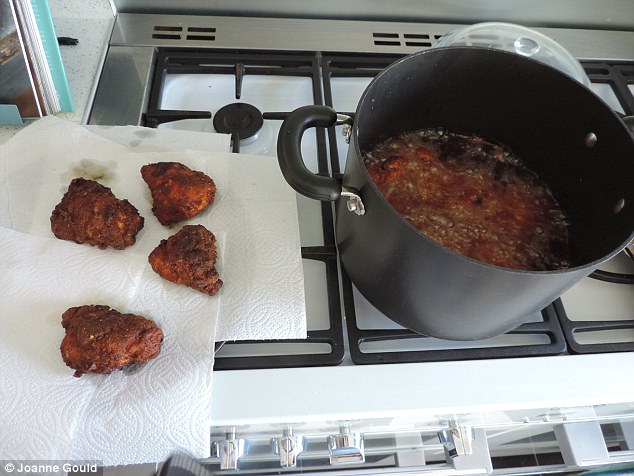 Transfer chicken pieces to a baking sheet covered with paper towels. Allow the oil to return to temperature before adding more chicken

Each one is then drained on kitchen towel to remove excess oil – and that’s it.

It certainly looks the part, with a far more impressive crispy coating than I’ve ever managed myself.

I think my chicken is perhaps a tad overdone too (I couldn’t get hold of a frying thermometer to monitor the temperature of the oil) but, regardless, I can’t wait to eat it and compare it to the famous chicken chain’s version. 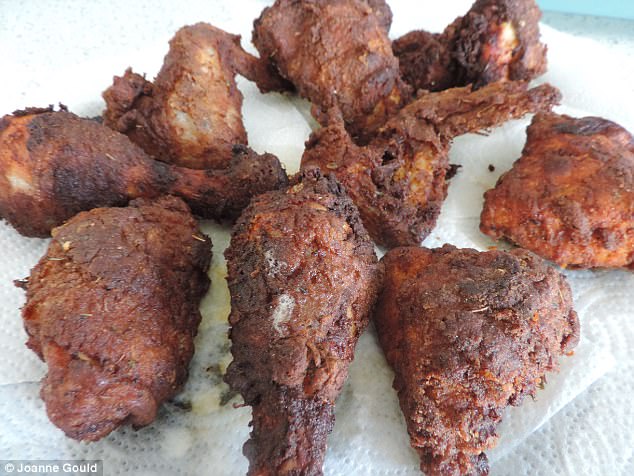 RECIPE: MAKE YOUR OWN KFC CHICKEN FROM HOME 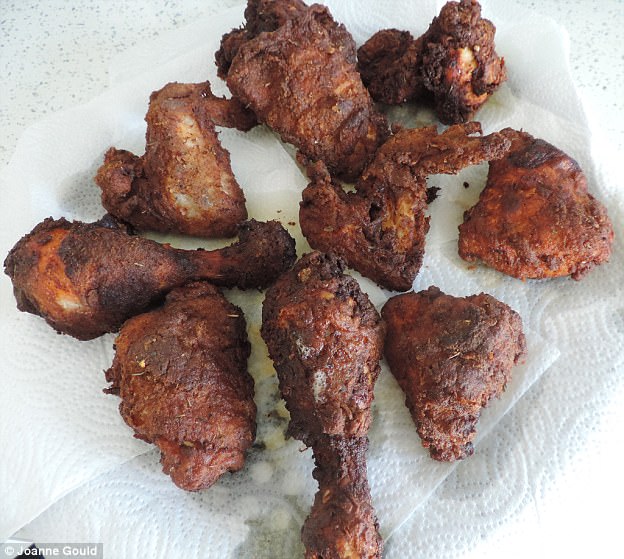 1 chicken, cut up, the breast pieces cut in half for more even frying

– Mix the flour in a bowl with all the herbs and spices; set aside.

– Mix the buttermilk and egg together in a separate bowl until combined. Soak the chicken in the buttermilk mixture at room temperature, 20-30 minutes.

– Remove chicken from the buttermilk, allowing excess to drip off. Dip the chicken pieces in the herb-spice-flour mixture to coat all sides, shaking off excess. Allow to sit on a rack over a baking sheet, 20 minutes.

– Meanwhile, heat about 3 inches of the oil in a large Dutch oven (or similar heavy pot with high sides) over medium-high heat to 350F degrees. Use a deep-frying thermometer to check the temperature. When temperature is reached, lower the heat to medium to maintain it at 350F. Fry 3 or 4 pieces at a time, being careful not to crowd the pot. Fry until medium golden brown, turning once, which should take 15-18 minutes. Transfer chicken pieces to a baking sheet covered with paper towels. Repeat with remaining chicken.

Taken from The Chicago Tribune