It’s family friendly Turkey with all the chic trimmings: Alacati is just like the Riviera but at a fraction of the price

The pavement cafes are filling up; couples are holding hands in the sunshine. You could be in St Tropez — except that a bottle of good chardonnay is about a tenner here and dinner for two costs less than £20.

This is the pretty town of Alacati on Turkey’s Izmir peninsula, a fertile crescent as long as the French Riviera but without the silly prices.

It’s pronounced ‘Alla Chatter’ which means red roofs. As recently as ten years ago there were only 18 hotels, now there are more than 400 — most of them small and calling themselves ‘butik’.

Fashionable retreat: Alacati is like the French Riviera – only without the crazy prices

This is because the chic set from Istanbul has descended on Alacati in droves, opening hotels and restaurants and building smart villas close to the peninsula’s glorious beaches which attract expert windsurfers.

Just be aware that any hotel within 100 yards of a mosque does not have a drinks licence but our hosts at the Zeytin Konak obligingly send out for some wine.

Zeytin Konak is a collection of four elegant mansion houses converted into a hotel, with lovely stone-flagged floors and two pools surrounded by lavender bushes.

Our second base is Cadde 75 hotel, another ‘butik’ delight, with stripped floors, wrought iron beds and lovely blue and white bed linen.

But what thrilled my nine-year-old daughter Katya most was that everyone was so friendly. ‘Turkish people really seem to like children, don’t they?’ she says.

Seeing anywhere through the eyes of a child is charming even for the most jaded traveller. All those things that annoy the hell out of adults (Bob Marley songs sung in Turkish) go unnoticed. Katya sees only wonder in almost everything. 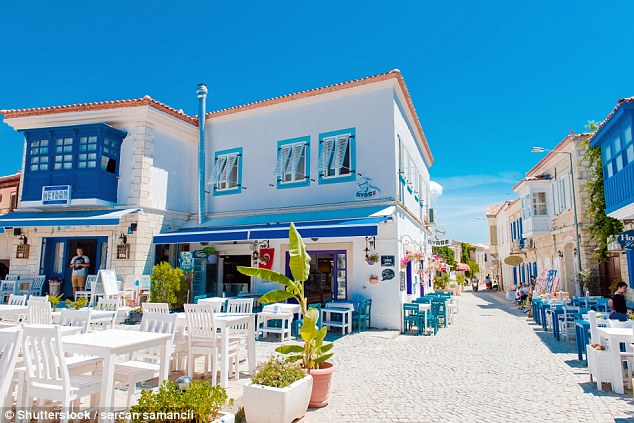 Rules: Any hotel within 100 yards of a mosque does not have a drinks licence in Alacati

You simply must visit one of the two Ferdi Baba restaurants, one in Alacati marina, the other in Cesme, the beach resort of Alacati. Both have lovely views of bobbing yachts, sublime seafood and a cold counter groaning with imaginative starters.

At both our hotels, we particularly enjoy our breakfasts of fruit, yoghurt and the wonderful pisi — tiny hot pastries which you split open and fill with jam.

A basket of 12 is put in front of the two of us and somehow disappears. The only thing I suggest you avoid is manti, a stuffed pasta dish with dollops of hot yoghurt on top.

Half an hour’s drive from Alacati is the Urla winery, which produces 200,000 bottles a year and they’re so good that they have won more than 150 awards and are served in Michelin-starred restaurants in London. 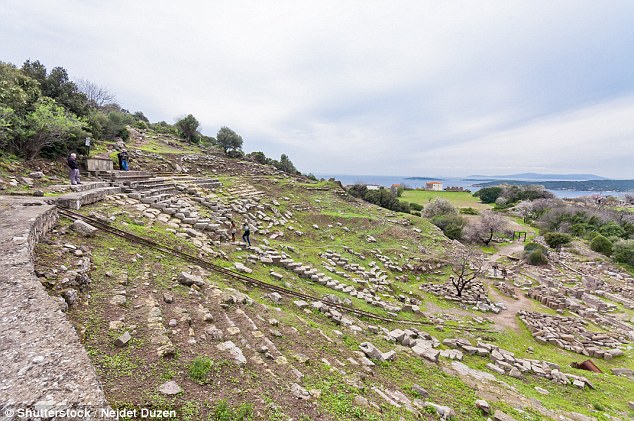 Ghosts of the past: For an ancient history fix, the ruins of Erythrai are a short drive away

The vinery owner, Can Ortabas, has somehow found time to create his own arboretum, where he has amassed 1,938 species of trees from around the world. For an ancient history fix, the ruins of Erythrai are a short drive away and are atmospheric, especially if, like us, you find you’re the only people there.

It is one of the 12 Ionian cities of Asia Minor and now there’s just the amphitheatre and a couple of houses but the views from the highest ‘seats’ are impressive. If your stay includes a Saturday, then you have to visit Alacati market, where 200 stalls groan with fruit, wild herbs, fabulous pickles and pastries.

We pick up some leather loafers for under a tenner, and there was even, dare I say it, a stall selling Mac and Chanel make-up — the provenance of which remained unknown.

I’m a dog lover and many of my trips abroad have been marred by the sight of emaciated canines roaming the streets. But not here. The dogs all look well-fed and content and are friendly, thanks to a civic programme of neutering, chipping and encouraging restaurant owners to feed them at closing time. Bravo, I say.

Travel Facts: Plan your own trip