While 156,000 tourists were left stranded abroad last night after Thomas Cook’s sudden collapse, up to a million customers faced heartache at home as trips of a lifetime were cancelled.

They have paid for holidays and planned them for months only to see their dreams in tatters.

As the massive two-week operation to repatriate UK tourists got under way, families told how their plans were in chaos and they were uncertain when they would get refunds.

Seven-year-old Connor Kitching’s trip to Disney in Florida with his family was supposed to be a well-earned reward for his bravery after beating cancer.

His mother Katie Butler, 26, and father Stephen Kitching, 28, had planned the trip of a lifetime for Connor, who was diagnosed with liver cancer in April 2017, and his brother Charlie, six.

They had spent around £6,500 on the holiday after a fundraising campaign was set up in their home area of Yiewsley in west London. The family were due to jet off next week but now their plans have been dashed.

Miss Butler said she is ‘absolutely gutted’ at the news of Cook’s collapse. She added: ‘A lot of people in our community raised money in order for us to make this trip. It would have been our escape after a really bad time for all of us.’

She stressed that telling the kids, especially Connor, was ‘absolutely heart-breaking’. Connor was diagnosed with a tumour on his liver and underwent chemotherapy at Great Ormond Street Hospital until June this year when he was declared cancer-free. The family said they will now ask for a refund and plan a new holiday. 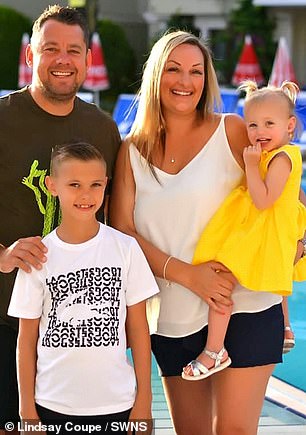 Lindsay Coupe (second from the right), 37, and Lee Bramhall (left), 42, were set to fly out yesterday morning for their wedding

A wedding party of 45 people were left stranded at Manchester airport after their Thomas Cook flight to Jamaica was cancelled.

Lindsay Coupe, 37, and Lee Bramhall, 42, were set to fly out yesterday morning ahead of the ceremony on Saturday. As well as missing out on the wedding of a lifetime, the couple fear they will lose tens of thousands of pounds if the trip falls through. Miss Coupe, from Sheffield, said: ‘I am absolutely gutted. You spend all that time planning and looking forward to your wedding day. I can’t believe this has happened. I had a really big cry earlier because it all got too much.

‘I know that won’t help the situation so I’ve got myself together and am now just praying we get some good news.’

Honeymoon in the Maldives is lost

Lewis Bromiley and his wife Amy, who got married in August, were supposed to be travelling to the ‘paradise’ of the Maldives for their honeymoon.

They said now they expect to wait months for a refund on their £7,000 trip. Mr Bromiley, a 25-year-old insurance worker from Manchester, said: ‘We booked it over a year ago so we were well-prepared and had got the best deal.

‘Me and my wife are devastated. We wanted to go to Maldives as it’s paradise. We’re looking to plan for children soon so we wanted to tick it off our bucket list before we couldn’t.’ Mr Bromiley criticised the way the situation had been handled, adding it was ‘poorly communicated’. 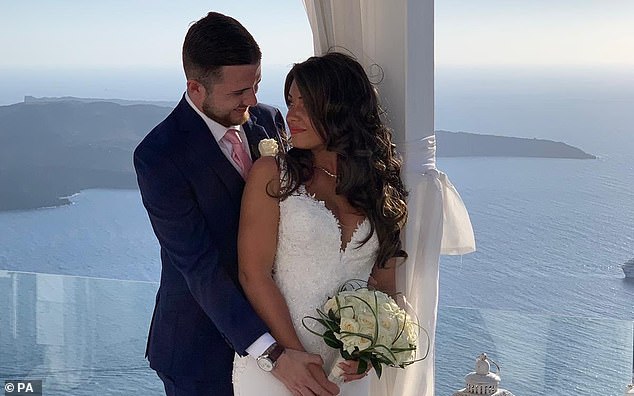 Lewis Bromiley and his wife Amy, who got married in August, were supposed to be travelling to the ‘paradise’ of the Maldives for their honeymoon

Anguish over trip for terminally-ill man

While some travellers were facing the loss of their first holiday together, for others it was potentially their last. Matt Dominic, 43, was given only six months to live when he received a terminal brain cancer diagnosis in May 2018. Well-wishers raised £1,800 to fly the former Rolls-Royce worker and his wife Lyndsay, 42, to Tenerife today for a week in the sun – possibly their last trip away together. Now Mrs Dominic fears there will not be enough time to arrange another holiday.

She said: ‘It’s not possible for us to book another holiday unless we get our money back. And I keep reading that it could take up to two months to get refunded.’

Mrs Dominic, of Allestree, Derby, said the two phone numbers she has for Thomas Cook are only playing a recorded message and she cannot get through to anyone at the Civil Aviation Authority.

She insisted: ‘I would appreciate being prioritised especially under the circumstances. I don’t blame the Thomas Cook staff at all. It’s not their fault. 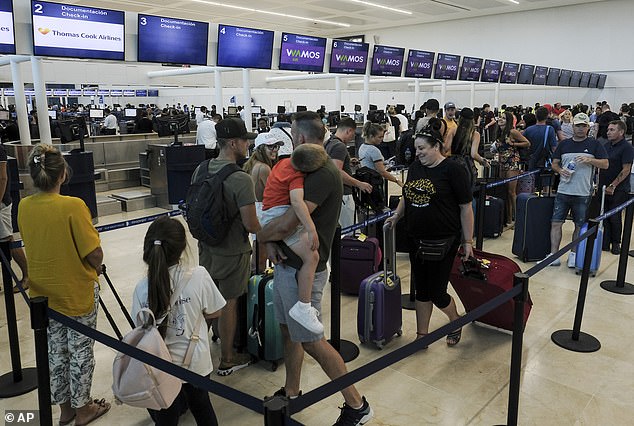 They were kept in the dark as well. I really felt for them. The bosses are a different matter. They’re all in it for themselves.’

Mrs Dominic said she and her husband, 43, were ‘gutted’. She stressed: ‘He was really looking forward to it.’

Laura Thorne, 32, and Lee Grant, 43, from Swindon, Wiltshire, were left unsure whether their dream wedding in Cyprus would go ahead after two years of planning.

The couple had arranged for 61 guests to fly out for the ceremony, paying a total of £80,000 to Thomas Cook. Miss Thorne told The Sun: ‘I just think it’s impossible to re-plan a whole wedding in a week. We might have to do a holiday in Cyprus instead. I can’t believe it. It’s so stressful.’