Millions of people in Sydney have woken to their first day of a week-long lockdown as authorities work to contain a coronavirus outbreak that has ballooned to 65 cases.

Despite fears the virus could be spreading rapidly through the city with exposure sites stretching across the city, thousands in the locked-down eastern suburbs flooded beaches and parks on Saturday morning.

Bondi Beach was packed with people congregating without masks, while Rushcutters Bay Park was filled with people exercising to escape their homes and enjoy the beautiful weekend weather.

The development comes as a leading expert declares an outbreak in Sydney is ‘inevitable.’

Professor Marylouise McLaws, a medicine expert from the UNSW, remains hopeful that the current lockdown will help, but also believes it may be too late.

‘Well, I hope I’m wrong – I hope that I don’t see any more cases outside the four (LGA) areas and the hotspot…or the warm spot that’s now been found in Manly. But I think that we will,’ she told the Australian Financial Review. 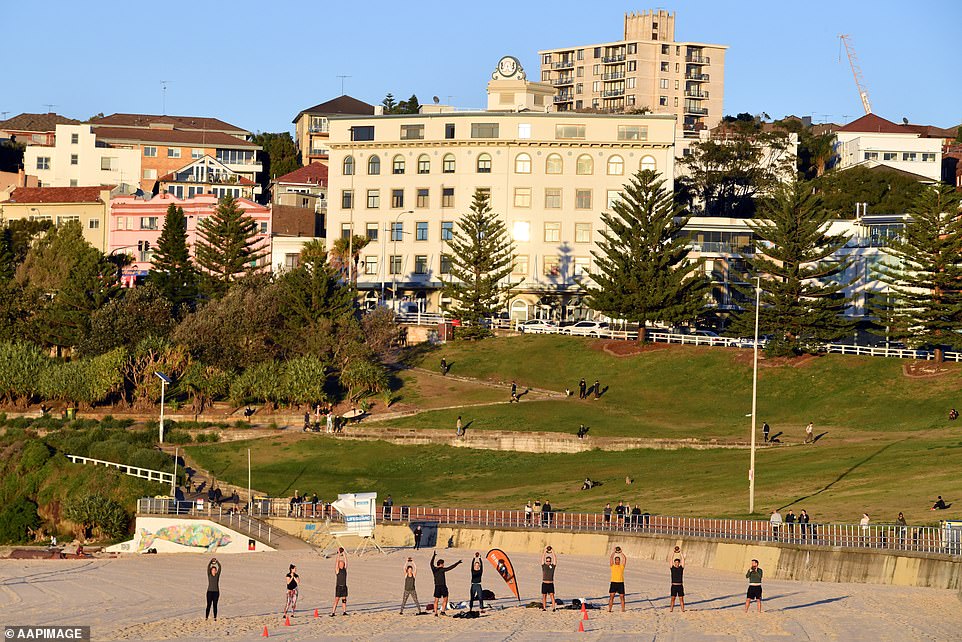 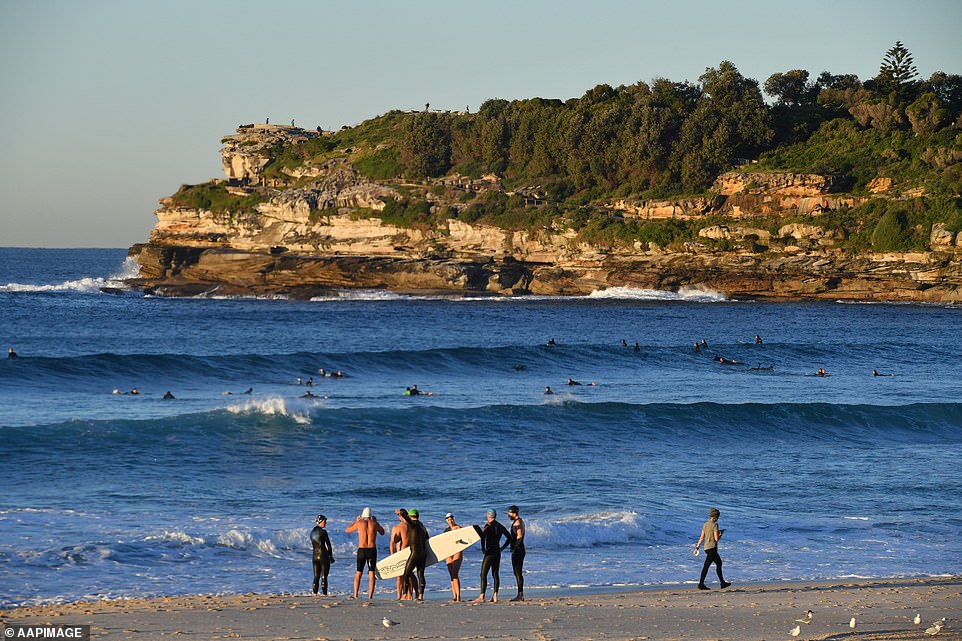 Surfers and swimmers braved the winter cold at Bondi Beach on Saturday morning, as some parts of NSW endure a lockdown 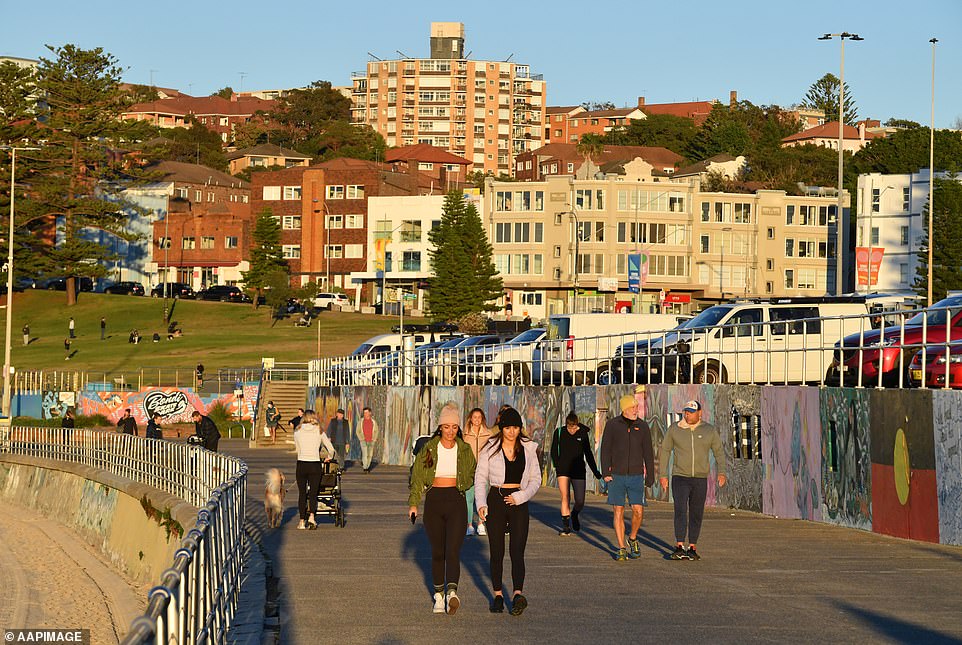 Bondi Beach was filled with people on Saturday morning, as people used the opportunity to get in some exercise

‘And it is inevitable, because with the lockdown in the Eastern Suburbs, there will be many that have had time with their children, because they’re on school holidays, to have moved out of that area and then inadvertently taken infection with them. So we will see more.

‘And you know, rapid lockdowns from last weekend then could have identified that we were going into a very bad place and that we could have then extended that lockdown.’

The list of exposure sites is growing, with venues in the northern beaches, Lakemba and Auburn an another two train routes added overnight on Friday.

People who live or work in Woollahra, Waverley, Randwick and the City of Sydney council areas will not be able to leave home for a week except for essential purposes.

These include work or education, shopping, providing care or outside exercise.

Australian Chief Medical Officer Paul Kelly has also extended his declaration of Sydney as a hotspot, paving the way for Commonwealth support to be offered.

Coronavirus disaster payments of up to $500 kick in seven days after a hotspot is declared.

Eligible workers left without income in the seven local government hotspot areas will be able to access the one-off payment from July 1.

Treasurer Dominic Perrottet on Friday night also said he was looking at ways to provide support of affected businesses and workers. 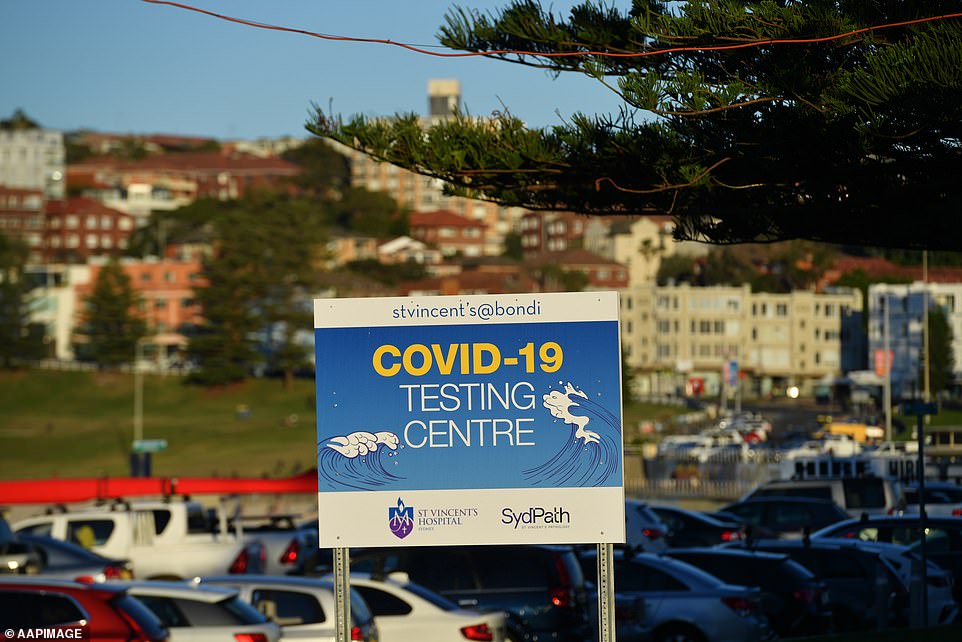 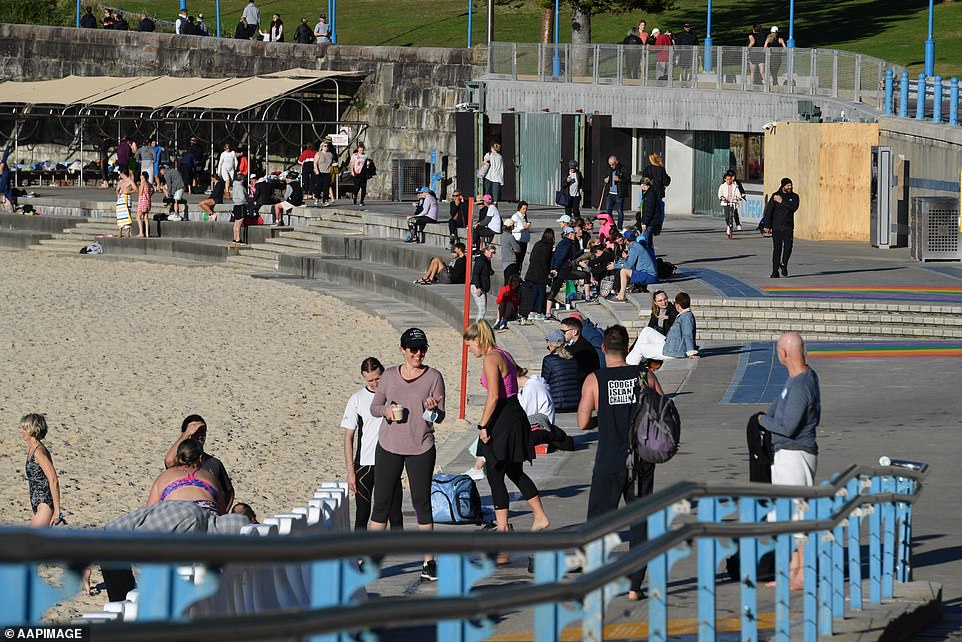 In a concerning development, people exercising with no masks were seen at Coogee Beach in Sydney 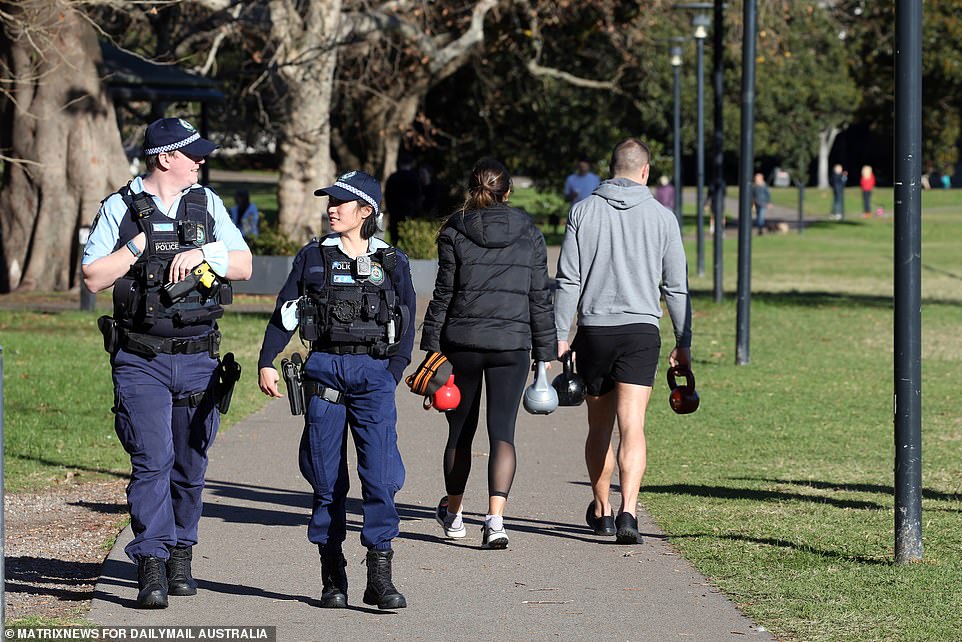 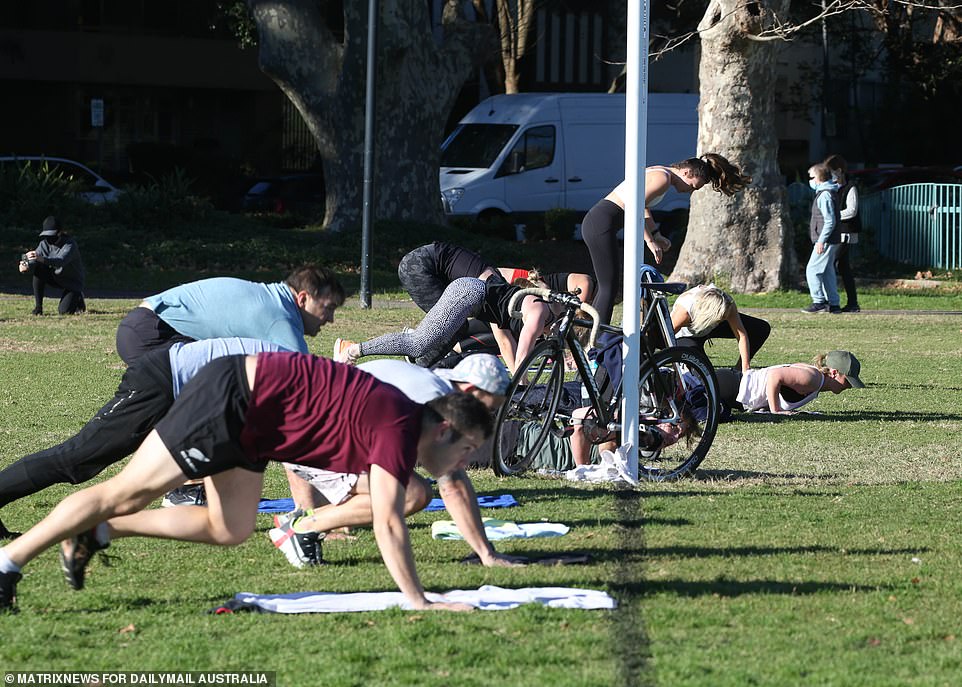 With gyms in Sydney’s east closed due to lockdown, locals flocked to parks and reserves to get in their Saturday morning exercise 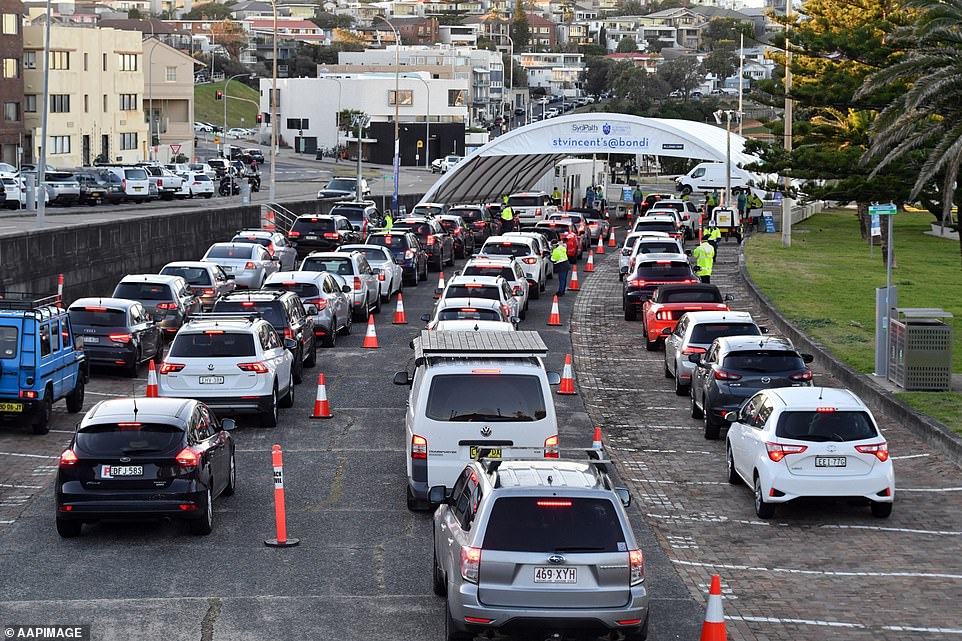 A woman works out using a rock at Bondi Beach on June 26, 2021 in Sydney – exercise is permitted during the lockdown 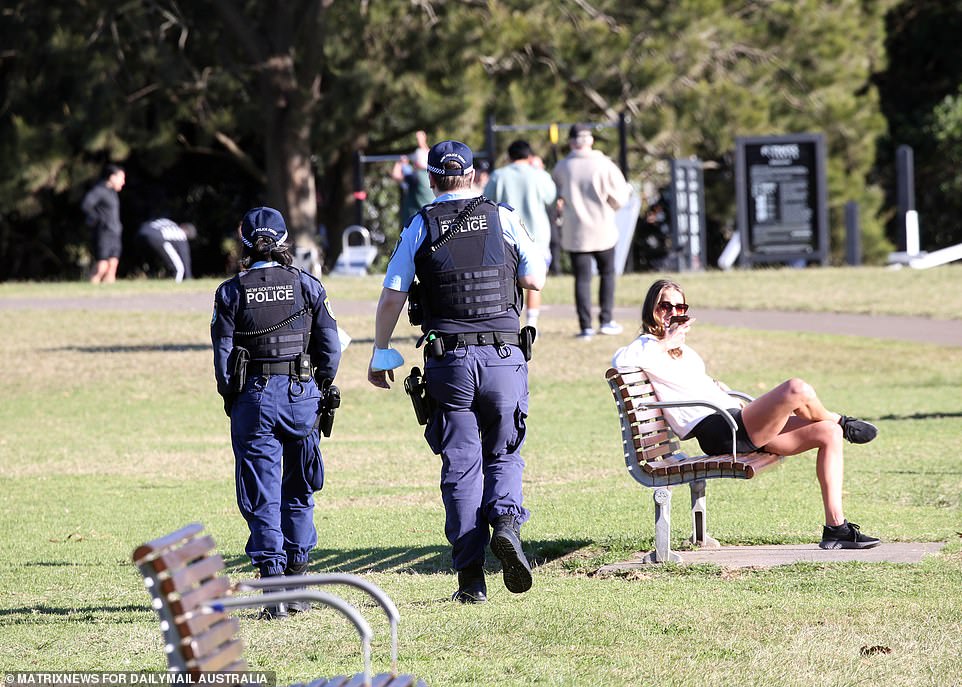 Eleven cases were detected in the 24 hours to 8pm on Thursday night, six of which were already reported. There were 17 further infections after 8pm which will be recorded in Saturday’s tally.

Premier Gladys Berejiklian said authorities expect the number of cases to surge further, despite the lockdown.

‘We expect household contacts to develop the virus,’ Premier Gladys Berejiklian told reporters on Friday after a crisis meeting to review the swelling figures.

But the Australian Medical Association has said the current restrictions will not be enough to get on top of the outbreak, and it has called for the entire Sydney basin to be locked down.

Adding to the concern is confusion about the rules of the lockdown. 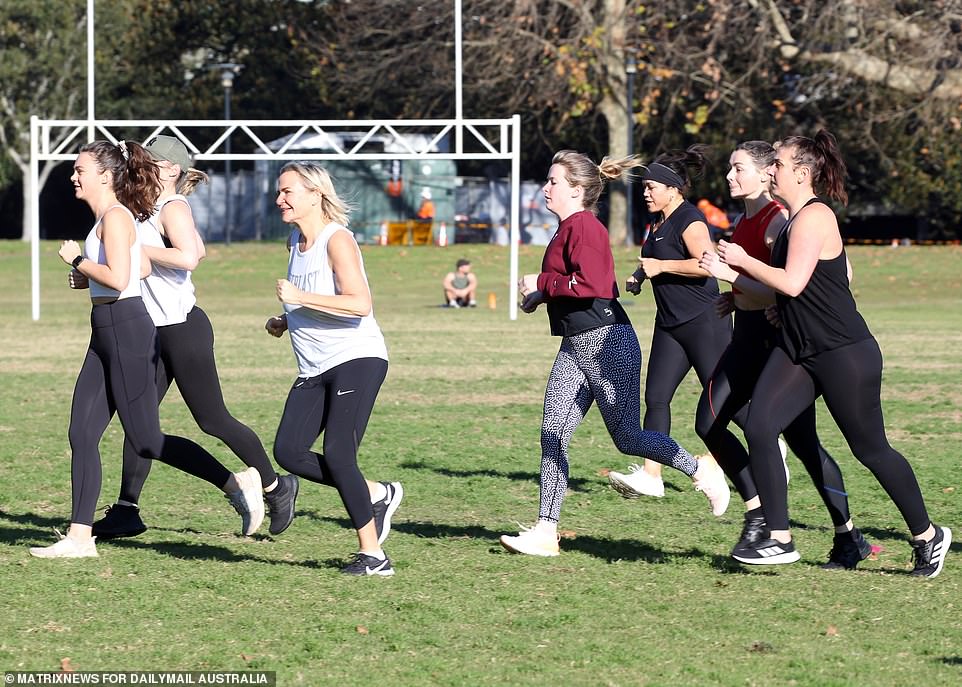 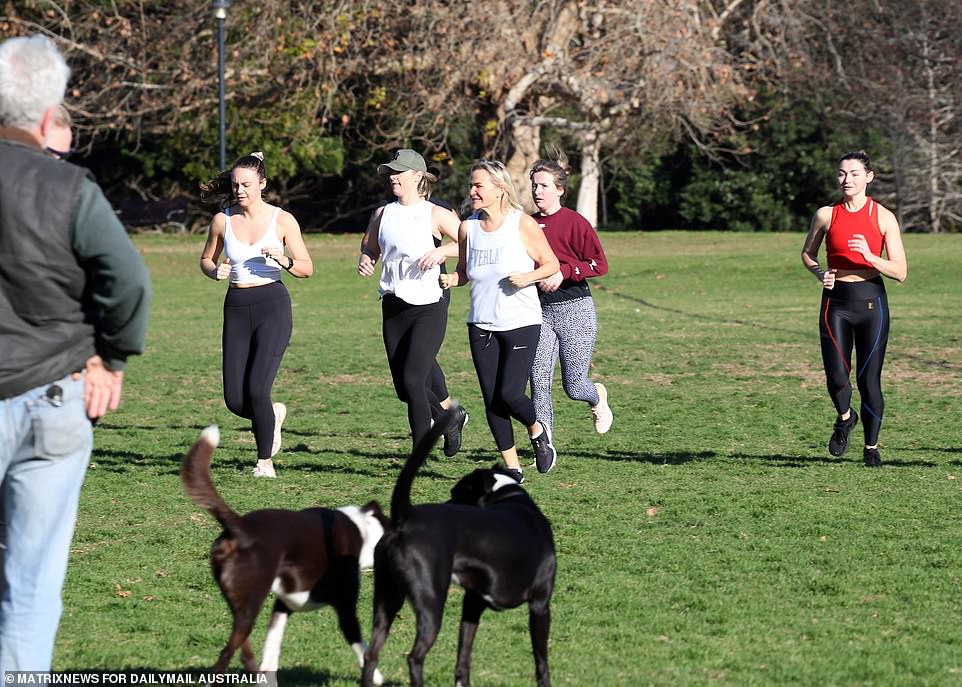 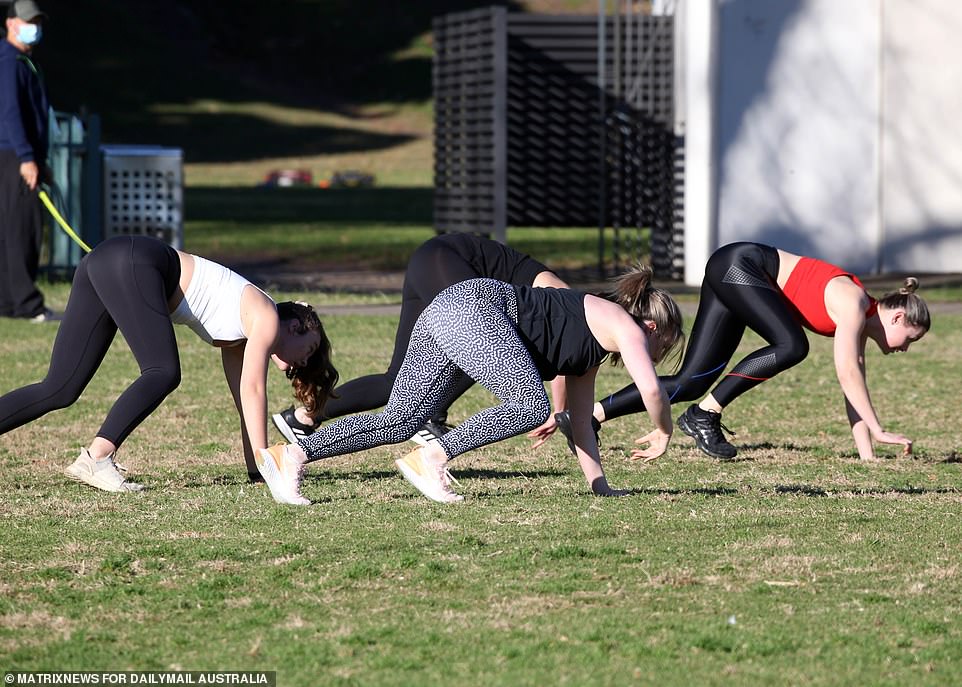 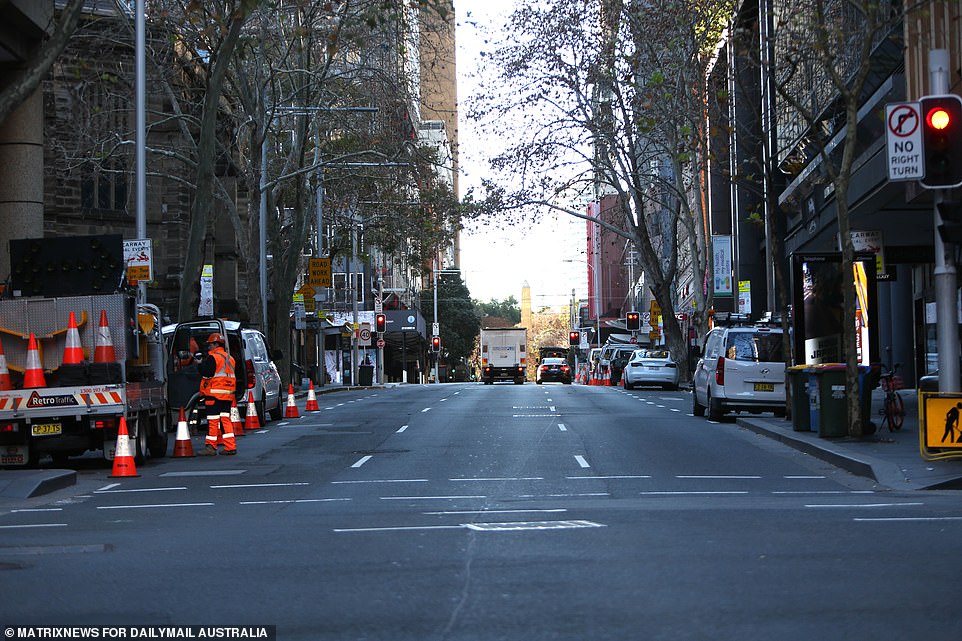 Sydney’s CBD is currently resembling a ghost town, with city workers encouraged to leave the office and work from home where possible until Friday, July 2 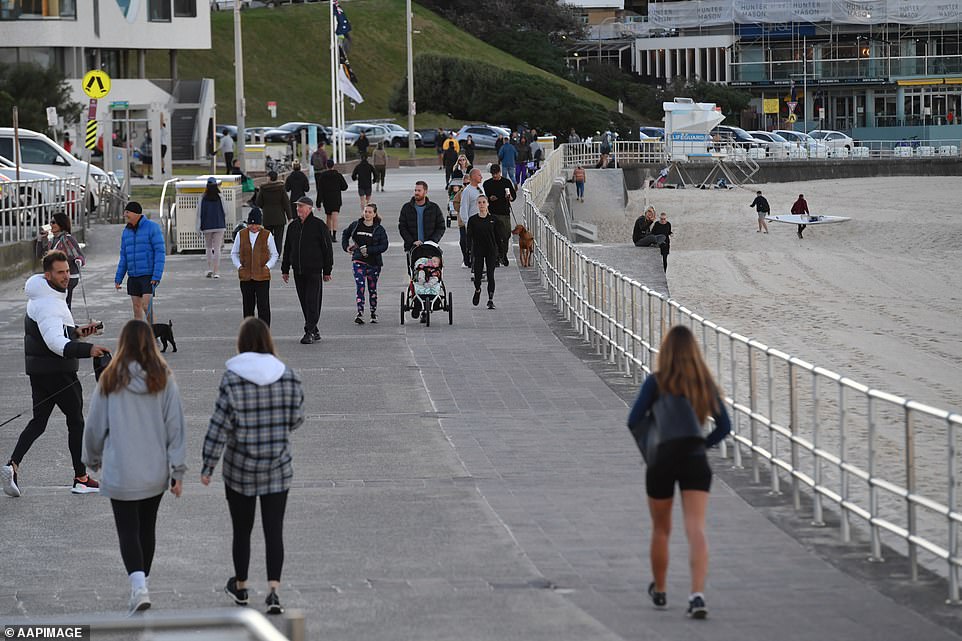 Bondi Beach was brimming with people early on Saturday morning, as they were out exercising soon after the sun rose 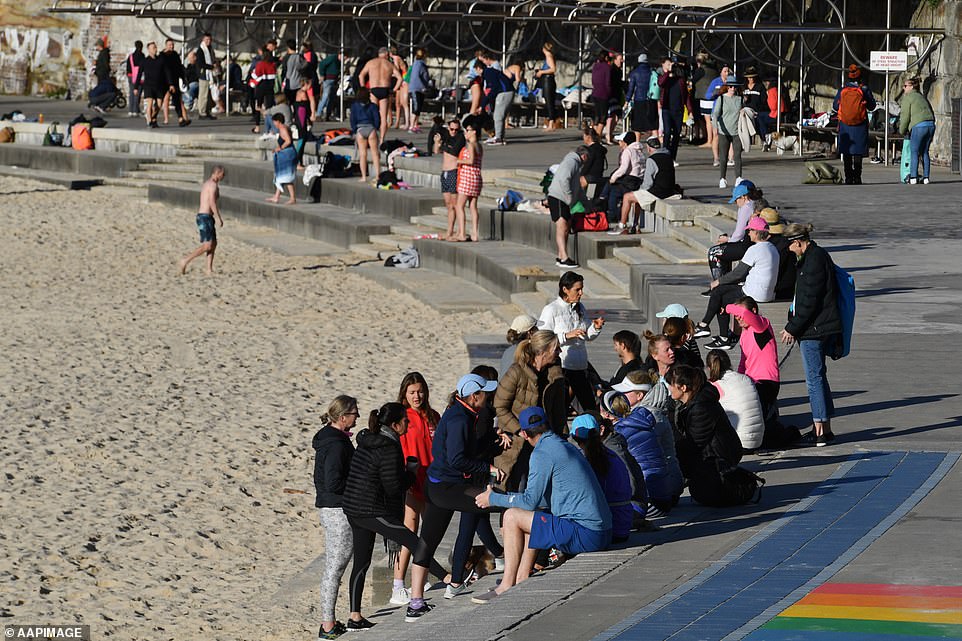 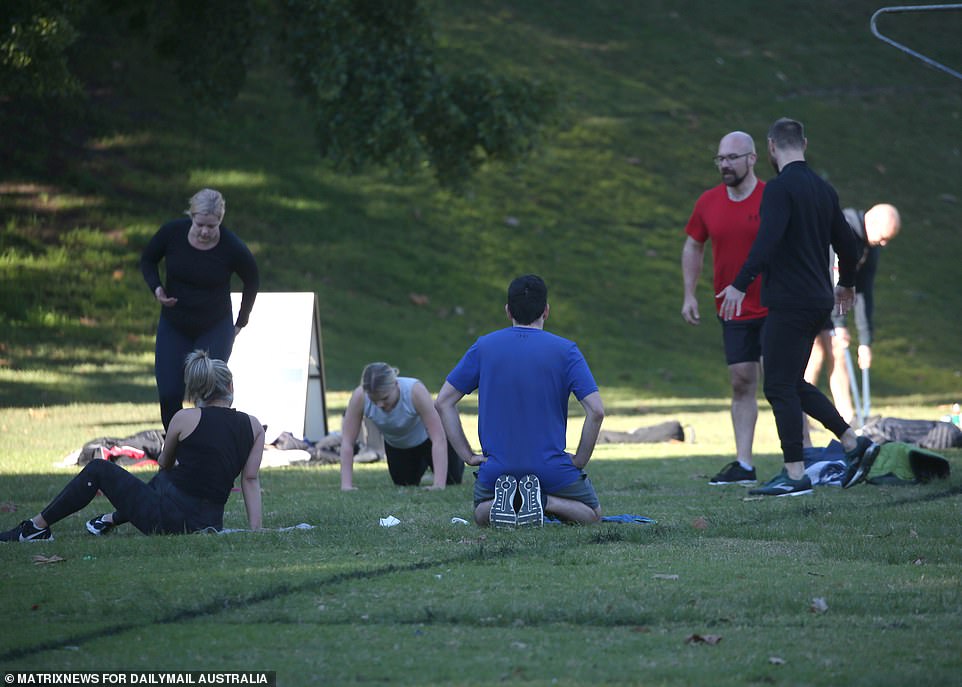 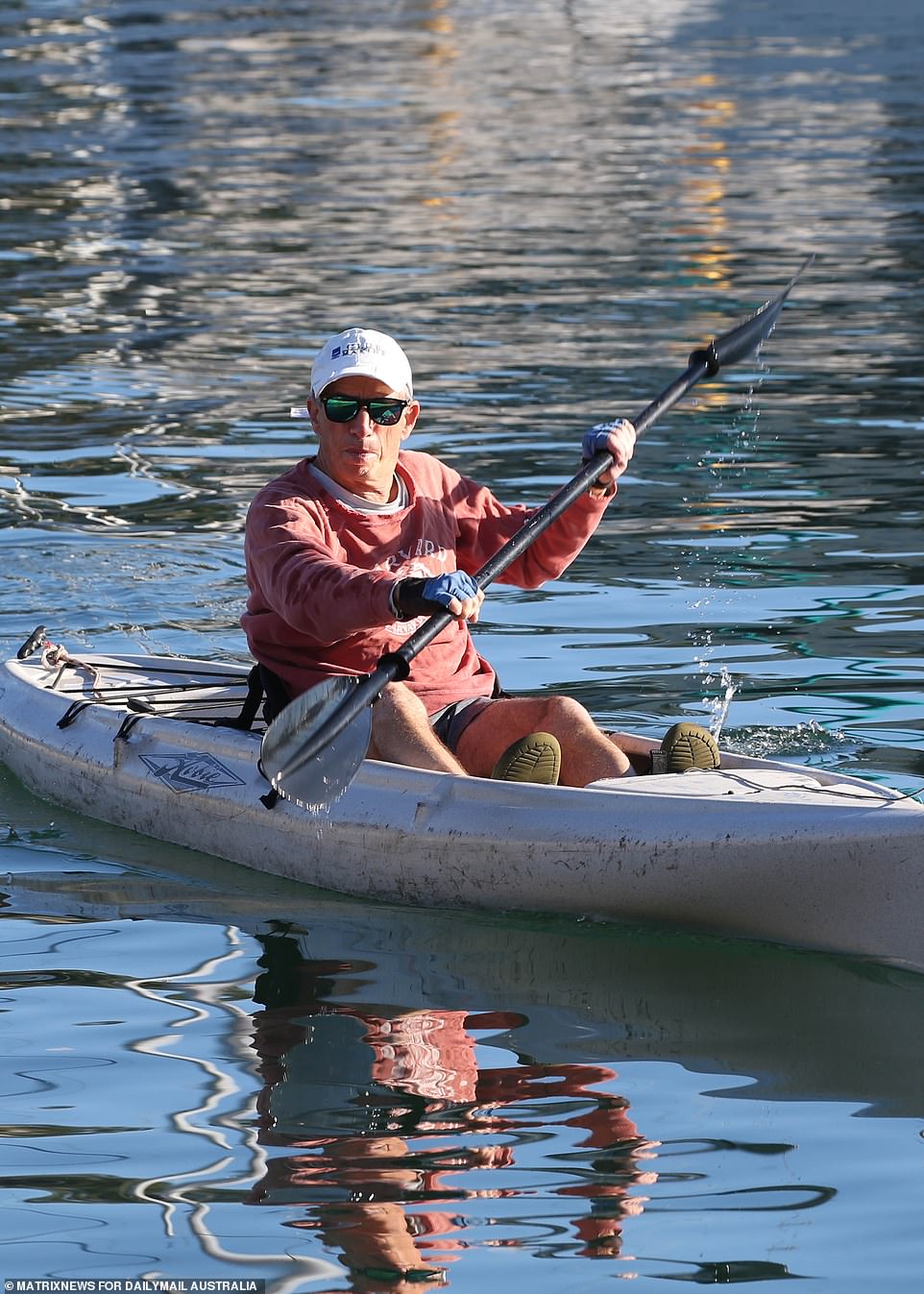 ‘Other non essential businesses and other services in houses of worship will cease,’ he tweeted.

Late on Friday health authorities added the Chinese restaurant Lotus Barangaroo to the growing list of exposure sites, ordering anyone who visited the venue on the afternoon of Sunday June 20 to isolate for 14 days.

People who have been to Lyfe Cafe at Bondi Beach, Lean Bean Fitness at Bondi, Moore Park View Hotel at Waterloo and Doncaster Hotel at Kensington at specified times must also isolate for a fortnight

Several shops and cafes in Barangaroo, Double Bay, Cecil Hills, Chipping Norton, Randwick, Zetland and Burwood were also added to the list, with people being told to test and isolate until they get a negative result.

A number of public transport routes were also affected.

Restrictions remain in place for other areas of Greater Sydney as well as the Central Coast, Blue Mountains, Wollongong and Shellharbour, while those who live or work in the Inner West, Canada Bay or Bayside council areas are still barred from leaving metropolitan Sydney.