‘It’s not been a great day’, says Hut Group boss as shares sink 35%

‘It’s not been a great day’, says Hut Group boss Matt Moulding as shares sink another 35%

By Hugo Duncan and Archie Mitchell For The Daily Mail

The Hut Group founder admitted ‘it has not been a great day’ after shares crashed another 35 per cent after a bungled presentation to investors.

Matt Moulding and wife Jodie saw £278million wiped off the value of their stake in the online retailer as the stock sank to a record low of 285p.

The brutal sell-off came in the final two hours of trading as Moulding delivered a ‘capital markets day’ briefing to analysts and investors.

The meeting was widely seen as an attempt to rally support for the company following a wave of negative commentary and to explain the value of the group’s online retail platform, THG Ingenuity.

But one leading investor said Moulding, 49, who is executive chairman and chief executive, had ‘failed to provide’ the reassurances required.

The subsequent fall in shares was the biggest since THG joined the stock market to great fanfare in September last year.

Speaking to the Mail after the share price crash, Moulding said: ‘It has not been a great day, that’s for sure.’ 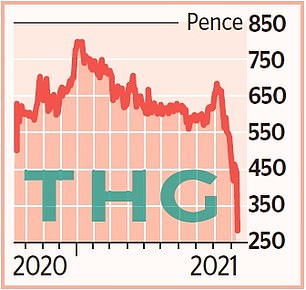 The latest rout took the share price fall to 58 per cent in just five weeks and leaves THG languishing well below its 500p float price in September last year.

The Manchester-based group, which sells clothes, make-up and protein shakes online, is now valued at £3.5billion, having hit £9.8billion when shares peaked at close to 800p in January.

Moulding, whose stake is still worth £493million, said it was unclear why the shares had fallen so sharply and so suddenly after what he described as a ‘teach-in’ on THG’s technology platform Ingenuity.

‘I don’t know the full answers to that,’ he told the Mail. ‘I’ll be on that with the banks very shortly.’

The Hut Group: Rise and Fall

The Hut Group was the darling of the stock market when it listed in September last year.

It was the biggest debut in London since the Royal Mail in 2013 and rose 25 per cent from its 500p offer price in its first day.

But shares started sliding five weeks ago amid rumours boss Matt Moulding wanted to split up the group.

It was confirmed on September 16 when he outlined plans to list THG Beauty as a separate company and suggested THG Nutrition could follow suit.

The shares took another lurch downwards when a research note published on October 1 by The Analyst told investors to short – or bet against – the stock.

Predicting the price could fall to 260p, the note claimed THG’s tech arm Ingenuity, which it said accounts for half the company’s value, may not meet expectations.

It left Moulding with a fight on his hands with all eyes on yesterday’s ‘capital markets day’, when investors have the chance to discuss a company with its top management.

But it ended with The Hut Group having its worst ever day on the stock market, and more questions hanging over the company.

However, he suggested the company had been targeted by ‘short-sellers’ betting against the shares.

He also highlighted an ‘attack on the business ten days ago’ by research firm The Analyst that expressed doubts over Ingenuity as well as THG’s culture and corporate governance.

City sources suggested that while Moulding and other investors, including former Tesco chief Terry Leahy, have been left nursing heavy losses, hedge funds betting against the stock have cashed in.

But analysts said shareholders may be selling out amid concerns about profit warnings in the retail sector and the planned spin-off of THG’s beauty arm.

‘There are reports that a number of different institutional investors have sold shares,’ said Susannah Streeter at Hargreaves Lansdown.

The slump has been painful for workers who were given shares when the firm floated.

The float created 74 paper millionaires among the staff – though it is unclear if anyone has sold up.

Moulding said the fall in the share price was ‘a value debate’ rather than an existential crisis. ‘Let’s see where it lands, and wherever it lands let’s build from there,’ he said.

But the entrepreneur, who founded THG in 2004, said he was ‘proud’ of what the company has achieved.