My mother and I were in WHSmith in Guildford on a Saturday afternoon when I first became aware of the power of good looks. We’d spent a very happy afternoon shopping when she remarked: ‘You do know men are beginning to notice you, don’t you?’

Then 15, I was a fairly unsophisticated schoolgirl for whom the purchase of a new pencil case held far more allure than the prospect of male attention. But I had noticed it, too. And, yes, there was a frisson of excitement at the prospect of this new phase of my life.

For my mother, a very good-looking woman whose background was in fashion, it must have been a significant moment, too. She made the comment kindly, without a hint of jealousy or disapproval. But now, as a mother of two teenage daughters, I find myself in her shoes and know that a keen sense of loss is ignited as you pass on the beauty baton. 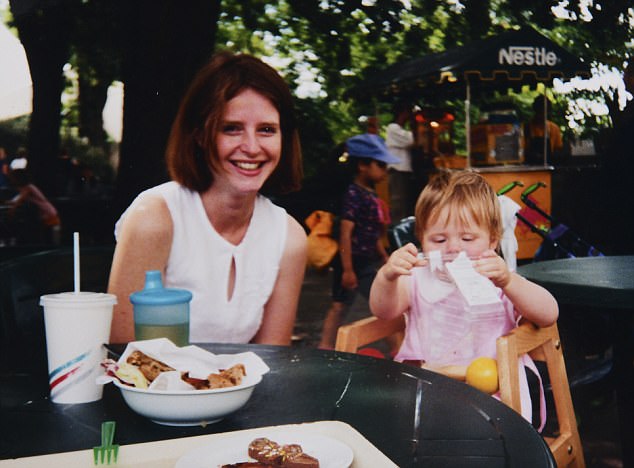 Unlike Sadie Frost, I was not blessed with film star looks or a figure fabulous enough to grace magazine covers. But, like many women, I had the power to make heads turn

It’s lovely that heads turn towards a beautiful daughter, but that also means they overlook her mother. You are becoming invisible.

I’m not unrealistic: on many days, I wouldn’t look twice at myself in a mirror, so why would anyone else? But I’d be dishonest if I claimed that invisibility doesn’t sting.

This is something Sadie Frost, 52, complained about last week.

Yes, it would be easy to accuse the British actress of more than a hint of narcissism.

After all, having been in the spotlight since her teens and been married to pop star Gary Kemp and actor Jude Law, she’s enjoyed more glamorous moments than most of us have had trips to the supermarket. Some say she should be glad for her good fortune and learn to live in the real world.

But, seeing as I’m grappling with precisely the same set of uncomfortable feelings, I wholeheartedly thank her for raising the issue. The truth is, as vain or vapid as it may sound to some, the gradual creep of invisibility is as cold and unappealing as last night’s congealed leftovers.

Unlike Sadie Frost, I was not blessed with film star looks or a figure fabulous enough to grace magazine covers; I have never been able to play the vamp or had the seductive pull to net not one but two famous husbands.

But, like many women, I had the power to make heads turn. 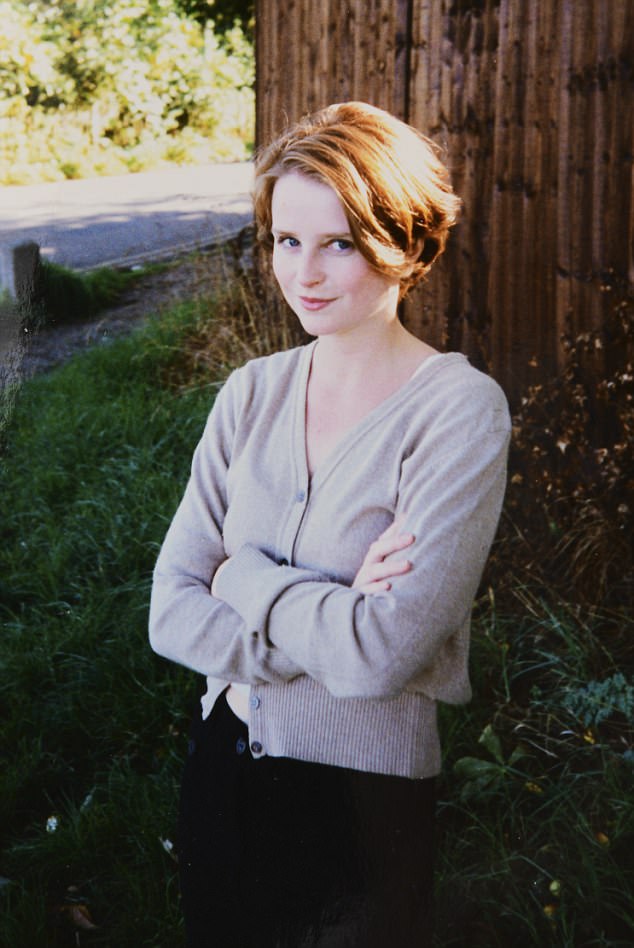 From a woman’s teens to her mid‑40s, a glorious cocktail of hormones and collagen gives you the power to command attention. Pictured, Annabel Cole aged 23

From a woman’s teens to her mid‑40s, a glorious cocktail of hormones and collagen gives you the power to command attention, to be noticed by the outside world. After which, that mysterious allure vanishes as suddenly as it appeared.

A case in point: a few months ago, my husband unearthed our wedding video, unwatched since we got married 20 years ago. At the end, we discovered some footage of the reception which we couldn’t recall ever having seen.

We scanned the film, picking out familiar faces, until my husband paused on a shot of a small group including a woman with her back to the camera. ‘Who on earth is that?’ asked my husband with a slightly flirtatious glint in his eye. ‘I don’t remember her.’

I gulped. ‘It’s me,’ I said. The fact I’d changed out of my white gown into a little black dress for the reception had slipped his mind.

It wasn’t the fact that my husband didn’t recognise me (I’ve got used to his clangers over the years and, looking on the positive side, he was at least noticing the woman he married).

What struck me was that — even without as much a glimpse of her face — he was reacting to the presence of a woman basking in the glow of youth. He didn’t recognise me because that isn’t me any more. There couldn’t be a clearer example of my current state of invisibility.

All the old clichés apply here. Youth is wasted on the young and, of course, you only know what you’ve got when it’s gone. In my late teens and 20s, being able to attract a longing gaze was as much a part of my daily life as shopping in TopShop or going to the wine bar on a Friday night.

As I moved through university and then into my first jobs in my 20s, I experienced the power of what I would now define as being a ‘visible woman’. And it had little to do with dates and boyfriends.

The ability to be noticed was most evident in the smaller things: the awareness that people looked up when you walk into a room; the fact that almost any conversation might have the potential to carry on over a drink.

One of the most thrilling things I can ever remember happening to me was as a 21-year-old at the University Library in Cambridge, studying for my finals. I got up to fetch a book from the stacks and returned to my place in the reading room to find an anonymous note, which simply said, ‘You look fantastic’. I still have it. 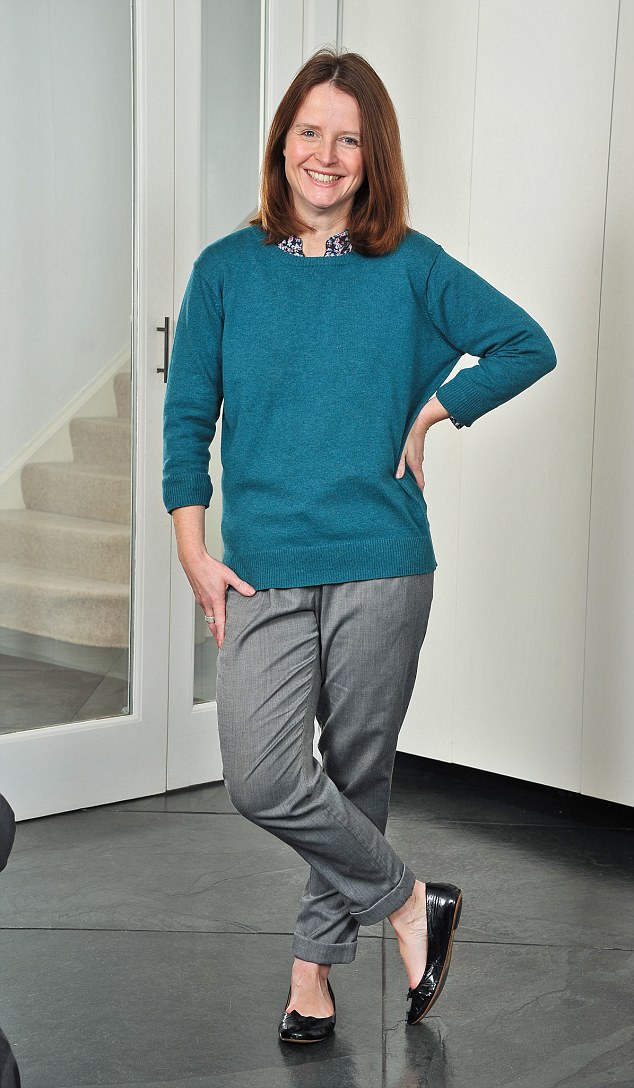 Getting married in my mid-20s and giving birth to three children in quick succession, I embraced motherhood. I was happy to say goodbye to my single self and be engulfed by a new, noisy unit of five.

The usual challenges of motherhood were there: the exhaustion and 24-hour demands of little ones — as well as keeping a marriage on track — were hard but surmountable.

Like most young mums, I spent months in the sandpit and too many hours spooning goop into unwilling mouths. I had no time for blow-dries — a staple of my former office life — and any kind of stylish outfit went out of the window while I relied instead on a lacklustre uniform of flat shoes, shapeless jeans and food-splattered jumpers.

But even after a tough day, if we were lucky enough to find a babysitter, I could still pull it out of the hat. Give me an hour alone in the bathroom, I could recover the old me. Back then I was still visible. I could command attention. I could always bounce back.

It was as a mum of three children under five, holidaying in Austria, that I was picked on the street to star in a national ad campaign for McDonald’s. And at adventure playgrounds, dads would ask me if I was the nanny … which I secretly loved.

There’s no doubt that with visibility and allure comes a degree of harmless flirtation. Being so deep into young motherhood, an affair was the very last thing on my mind. But knowing that I could still stir feelings, make a splash, was a real and welcome ego boost.

But about two years ago when I was 44, that ability began to slip through my fingers. And it had more to do with clocking up birthdays than the ravages of child-rearing. I actually feel that I look better in some ways than I did when I had little kids — I’m certainly better dressed — but it’s the allure that dies. That magic head-turning ingredient.

I hadn’t put on weight but my figure suddenly lost its shape; I became fitter than I have ever been through hours of walking our new puppy — but my legs turned to tree trunks. 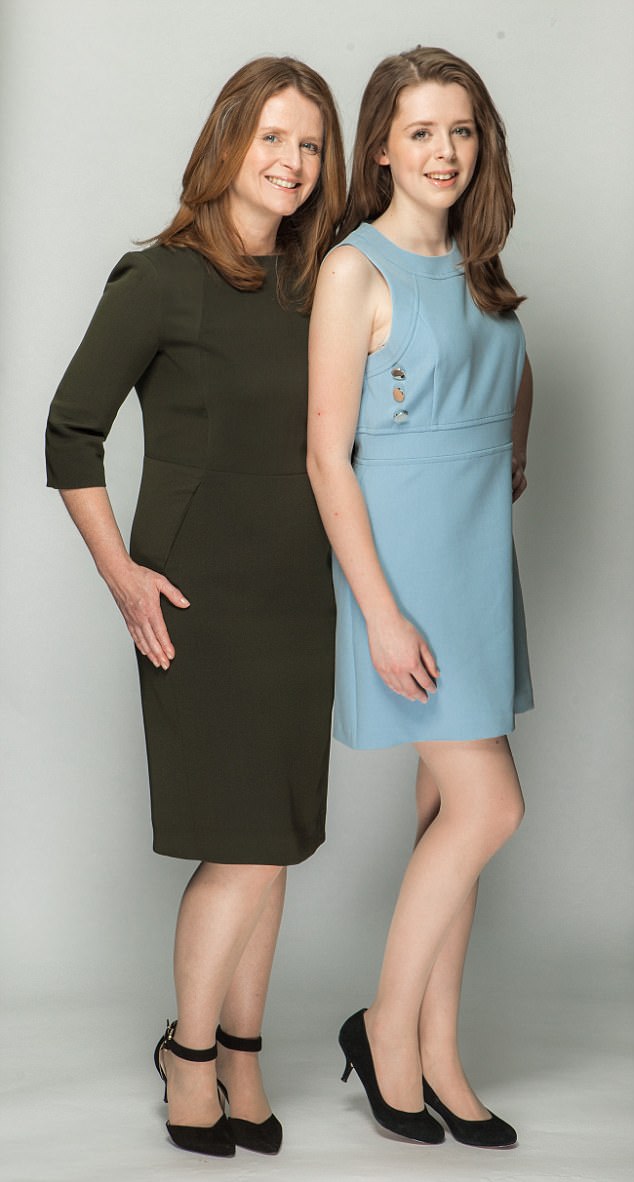 Youth is wasted on the young and, of course, you only know what you’ve got when it’s gone. Pictured, Annabel with her daughter Elsa

At the same time, my skin lost its glow and no amount of make-up or expensive creams brought it back. In short, I went from being a picture which caught the eye to the wallpaper you hang it on.

To answer feminists who declare they don’t want to be defined or compromised by their looks, I couldn’t agree more heartily. But the power of being a visible woman is not confined to attracting men. It’s about commanding attention from anyone.

As acutely as I have noticed a lack of male attention in recent years, there’s the absence of scrutiny by my own sex, too.

A new outfit doesn’t garner the glances from other smart women that it used to; testers in the perfume department don’t immediately make a beeline for me any more. I am just not on their radar. Superficial? Absolutely. But, nevertheless, it hurts.

But what about inner beauty? Surely truly beautiful women, of any age, radiate a sense of confidence which transcends looks?

Spare me! The diminishing ability to attract attention is as fundamental a part of the ageing process as the emergence of the first streaks of grey hair or discovering you can’t read fine print quite as easily as you used to.

Yes, at 46, I feel far happier in my skin than the stationery-loving 15-year-old in WHSmith, but ironically it’s just as you reach your inner prime that invisibility sets in.

Once you hit your 40s, you quite literally begin to fade away.

The contours of your face lose definition and the skin begins to look less plump. Lips which were once full and sensuous appear narrow and mean. The little smile which used to look tempting now unleashes a fan of fine lines. Skin takes on a lacklustre pallor. Hair fades to grey. Whatever your figure was like in the past and even if your weight has stayed constant, I can guarantee it will change — and not in a way you’ll be thrilled about.

And if you imagine bewailing invisibility is a yet another symptom of today’s aggressively looks-orientated celebrity culture, I would beg to differ.

George Eliot wrote her 1866 novel Felix Holt, The Radical when she was in her mid-40s. In it, she uses the character of the sorrowful, middle-aged Mrs Transome to, among other things, explore a woman’s acute awareness of her waning beauty and the loss of the influence it once wrought.

My daughters are now 15 and 18 and we’ve already had our WHSmith moment. I remember helping my elder daughter get ready for her leavers’ ball at school. In her long dress and a pair of my borrowed shoes, she suddenly looked like a young woman.

I kissed her and wished her a wonderful evening as her mother, but squeezed her arm and whispered to her, woman to woman: ‘You look amazing, but be careful — use your power wisely.’

I take great pleasure from watching my girls grow into self-confident young women, conscious of their femininity and having fun with it but using it wisely. Unlike Sadie Frost, who described feeling ‘irrelevant’ compared to the bright young things of today, I don’t feel sidelined by younger people. I enjoy their company, socially and professionally.

But, despite all of these wonderful gifts, it’s difficult to accept that at a time when you feel your best on the inside, the outside has not kept pace. Somehow, it makes daily life just a little more prosaic.

The incidental exchange you might have had on the Tube which you knew was just that and absolutely nothing more; the attention when you walk into a crowded room; the occasional glance that says: ‘You still have it.’ When these evade you, you notice.

It might not seem important at the time, but whoever you are, whatever your history, you miss it when it is gone.