Britain at its best: It’s time to stride out on Yorkshire’s captivating coast

By Bill Coles For The Daily Mail

As we wander through the old port of Whitby at night — with the mist rolling in from the sea — it’s not so difficult to imagine Count Dracula himself stalking the streets in search of fresh blood.

We are walking the coastal section of the Cleveland Way, and staying in the splendid North Yorkshire port of Whitby — famous for its fish and chips, its Abbey, and most of all for being Dracula’s first stop when he landed in Britain.

The town is awash with vampire paraphernalia — sweets, wines, vampire knick-knacks —and most of the seaside entertainment has a Gothic horror theme. This is good news, because we have three teenage boys in tow and they adore gory stories.

Walk this way: Sunset on the North Yorkshire Moors, part of the 110-mile Cleveland Way

We’re planning on walking the most scenic stretch of the 110-mile Cleveland Way, the 40 miles from Scarborough to Saltburn-by-the-Sea — and my feeling is that once we are allowed to travel freely again in the UK this could become even more of an iconic experience.

At the turn of the last century, these towns would have teemed with starchy Edwardian holiday-makers. They’re still busy today because they offer fun and affordable entertainment.

We catch the train to Scarborough and are immediately hit by its air of faded grandeur. The boys are enticed by the ruined castle, and particularly taken by its most infamous governor, Piers Gaveston — a handsome Gascon knight who was reputedly Edward II’s lover.

Scarborough also has the best waterpark that the boys have ever visited — Alpamare. Let’s hope it re-opens soon. Its rides are terrific, including a monster that takes four of us at a time.

We stay at Scarborough’s Grand Hotel — and walking in you get a taste of how very grand this place once used to be. Our rooms are down in the bowels of the hotel. Maybe it’s the boys’ fervid imaginations, but the corridors seem like something out of The Shining.

The next day, after an hour in the dreary Scarborough suburbs, suddenly we’re in open countryside. 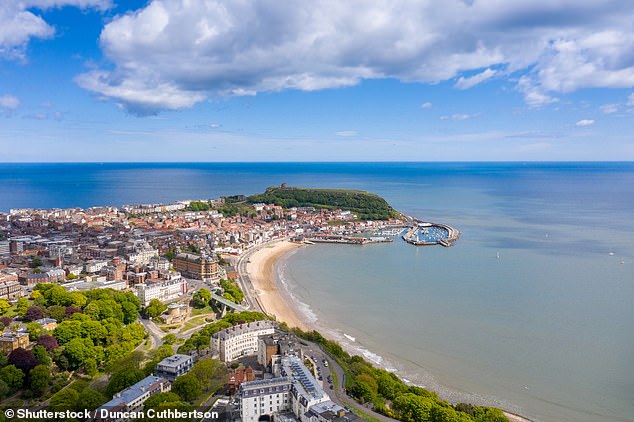 On his trip to Yorkshire, Bill visited Scarborough, where he is ‘immediately hit by its air of faded grandeur’

We have the coastal path all to ourselves, rolling fields on one side, majestic sea-views on the other. After a while the boys get into the rhythm of things. Phones and Whats App chats are all forgotten. We walk, eat sweets; and chat too, something that can be tricky with teenage boys.

The boys are delighted to reach Robin Hood’s Bay. It’s only 15 miles from Scarborough, but our path really puts the ‘Coast’ into roller coaster.

We try looking for fossils on the beach, but it’s much easier buying the ammonites from the local shops.

Robin Hood’s Bay is a small town which is always packed with walkers who are either trekking the Cleveland Way or the popular Coast to Coast. Finding somewhere to stay has not been easy and we end up a couple of miles away.

The walk to Whitby is an easy seven-miler, giving us plenty of time to explore. Of course, Dracula is Whitby’s main event, but Captain Cook was apprenticed here and his lodgings have been turned into a museum. 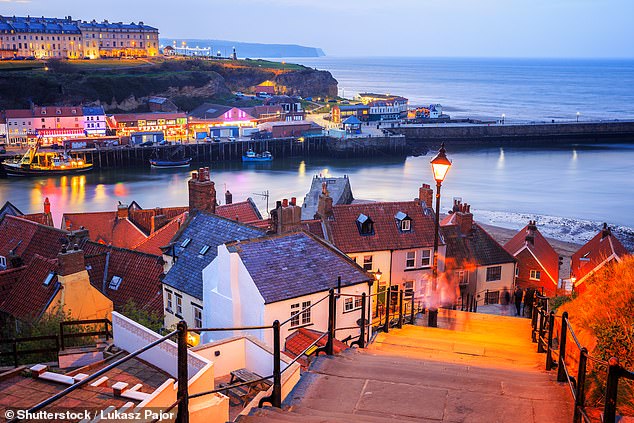 The North Yorkshire port of Whitby — famous for its fish and chips, its Abbey, and most of all for being Dracula’s first stop when he landed in Britain

The walk to Saltburn-by-the-Sea is a good 20-miler — but seeing as we’re not on a route march, we stop at Staithes, an old fishing village, and catch a cab.

Saltburn is just lovely, classiest of all our Victorian holiday towns; at dusk we walk along the fantastic cast-iron pier and as we look back, we have a glimpse of what Saltburn was like 100 years ago.

With any luck, staying at home to holiday in Britain will become positively mainstream — and towns such as Scarborough and Saltburn will be in for a long overdue renaissance.