Ivana Trump has reunited with her ex-husband-turned-ex-boyfriend Rossano Rubicondi — five months after she announced they had ended their relationship because she wanted to be a ‘free woman.’

The Czech businesswoman and her on-again, off-again beau were seen walking together in New York after enjoying a dinner date at the Italian restaurant Cipriani on Wednesday, the day before Thanksgiving.

Ivana, 70, and Rossano, 47, were both dressed in head-to-toe black as they walked arm in arm before hopping into a taxi together and returning to her townhouse. 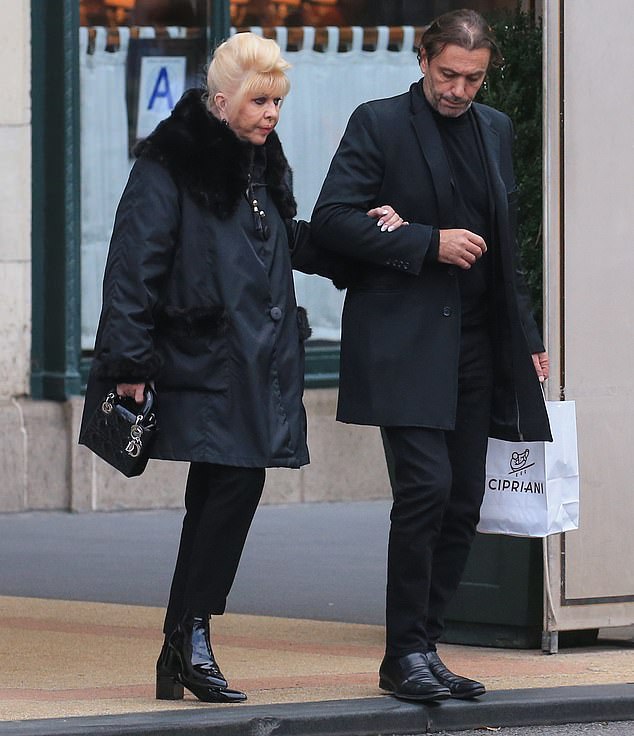 On the go: The former couple was seen leaving the Italian restaurant Cipriani 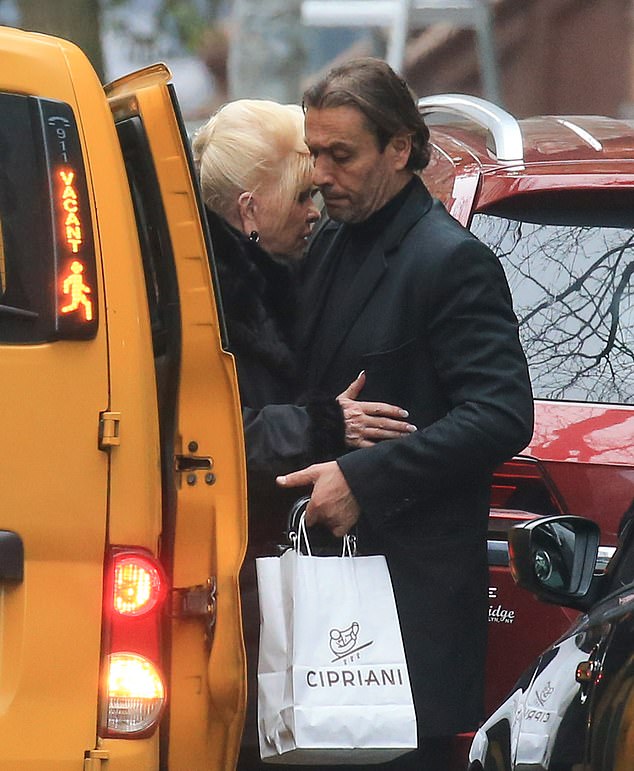 Assist: Rossano, 47, helped Ivana, 70, get into the back of a cab after leaving the restaurant

The former model kept warm in a black winter coat with a luxe fur collar and cuffs, which she wore over black straight-leg dress pants.

She topped off her look with stylish patent-leather ankle booties and her beloved Lady Dior mini bag.

Ivana’s platinum blonde hair was pulled back in her signature beehive with her bangs framing her face, which was perfectly made up.

She sported thick black liner around her eyes and rosy-pink lipstick, her preferred beauty look in recent years.

The socialite was seen walking by herself before meeting up with her old flame at the restaurant, where they spent about an hour eating. 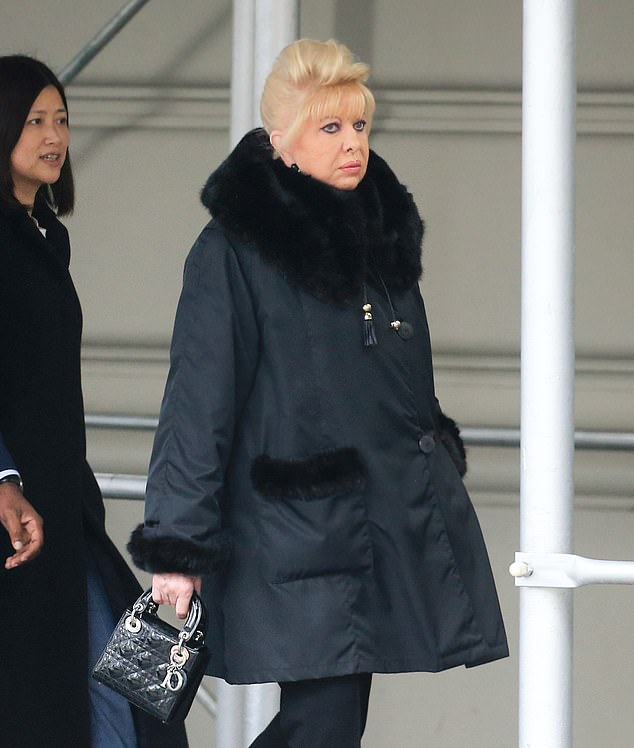 Socialite style: Ivana wore head-to-toe black for her dinner date with her ex

Winter weather: The former model kept warm in a black coat with a luxe fur collar and cuffs 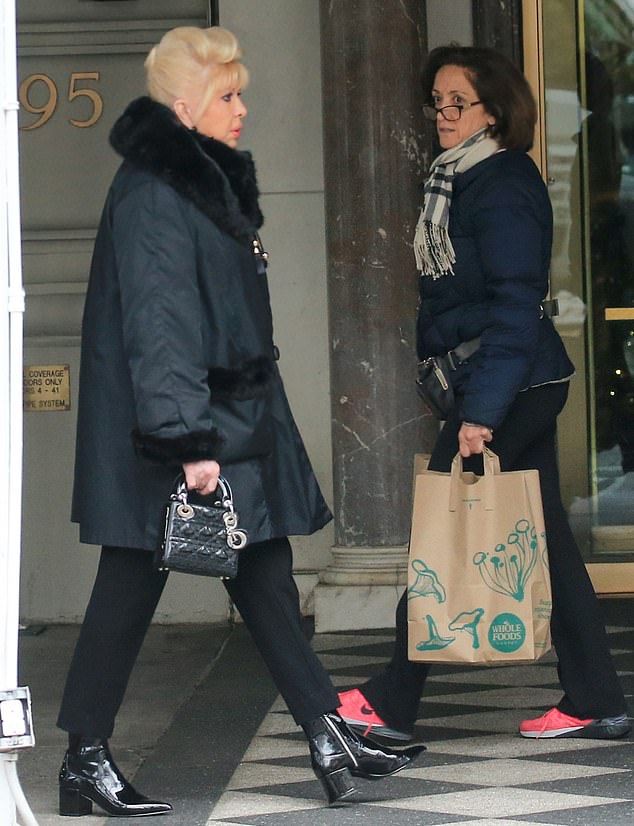 Added touch: Ivana carried beloved patent-leather Lady Dior mini bag in her right hand as she made her way to the restaurant 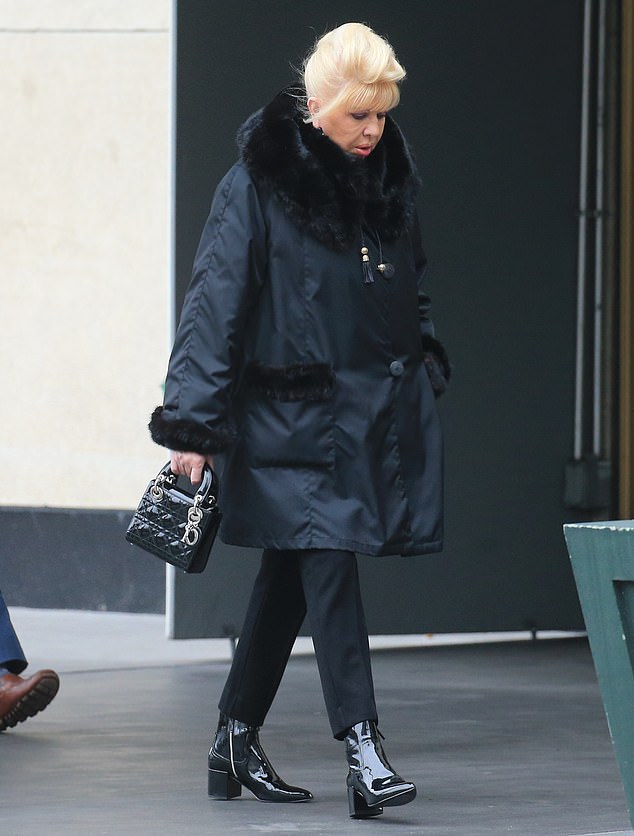 Style: The Czech businesswoman topped off her all-black look with a pair of patent-leather ankle booties 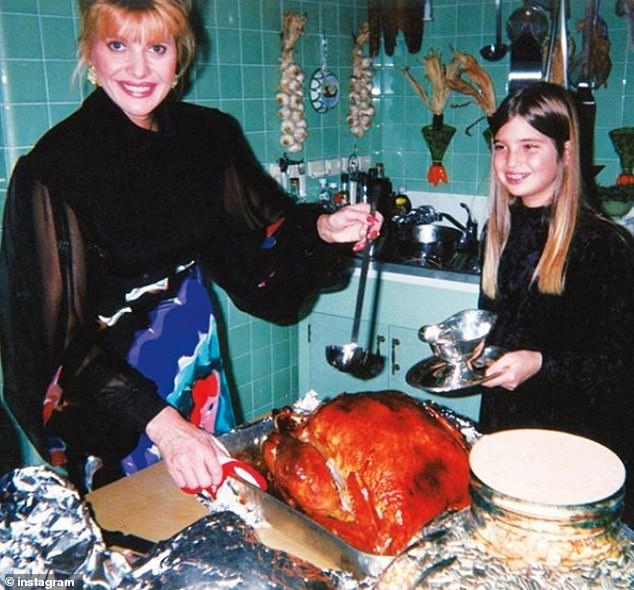 Thanksgivings past! A few hours before her lunch date with Rossano, Ivana’s daughter Ivanka shared a sweet throwback snap from a past holiday

They walked out together, with Rossano matching Ivana in a black wool coat that he wore over a black knit top and pants.

Ivana held onto her designer bag with one hand and her former beau’s arm with the other, while he carried their takeout bag from the restaurant.

The dinner may have simply been a friendly catch-up between the former couple, but they looked quite cozy as he helped her get into the back of their cab.

It’s unclear if they will be spending the Thanksgiving holiday together.

Ivana announced their split back in June before escaping to Saint-Tropez for the summer. 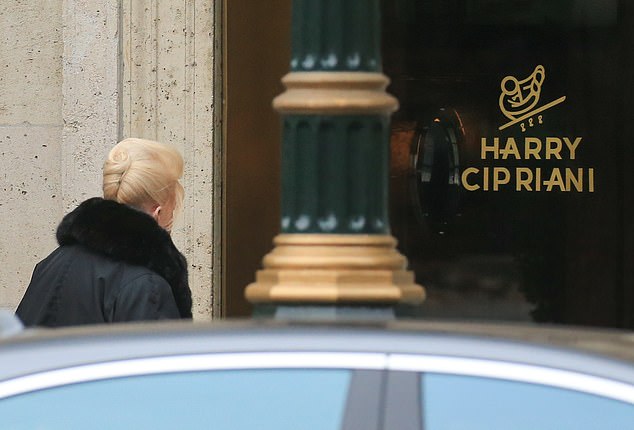 Single lady: Ivana walked to the restaurant by herself before meeting her old flame inside 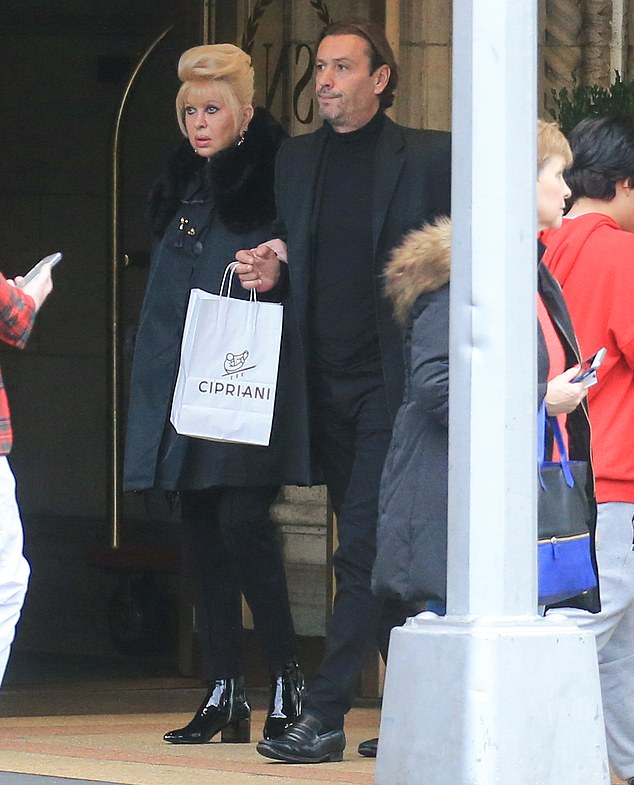 Heading out: Ivana and Rossano spent about an hour at the restaurant before they were seen leaving 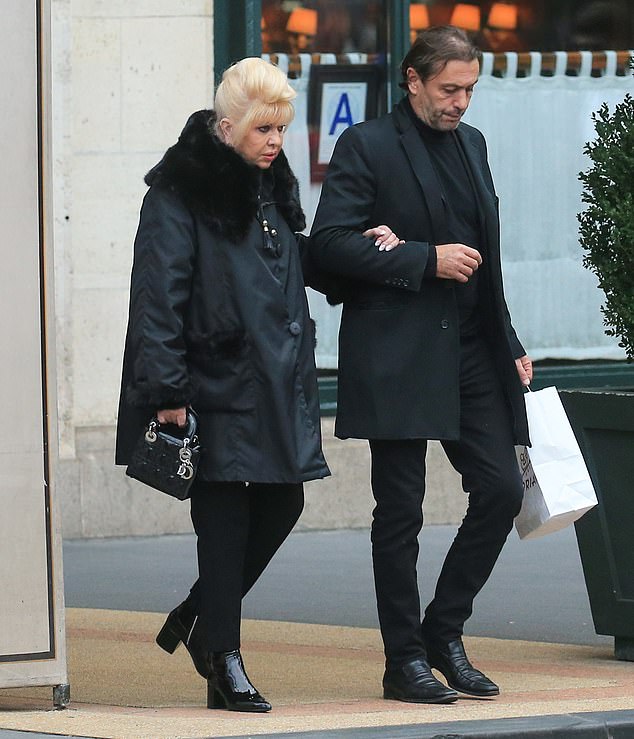 Friendly gesture? Ivana and Rossano strolled arm in arm as they left the restaurant together 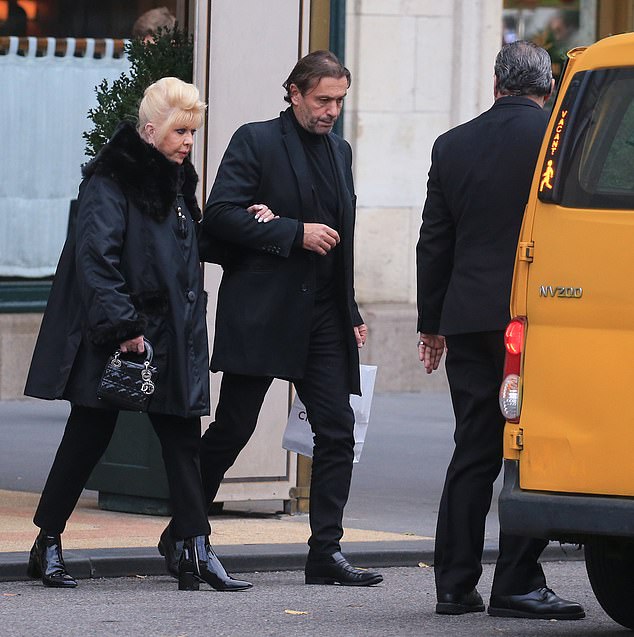 Leaving: Ivana held onto her designer bag with one hand and her former beau’s arm with the other, while he carried their takeout bag from the restaurant

The mother-of-three admitted that the time she spends in Saint-Tropez was part of the reason why she and her longtime beau couldn’t make their relationship work.

‘The long-distance relationship really doesn’t work,’ she added. ‘We had a good time and are friends. The split was amicable.’

Rossano, meanwhile, asserted that he has ‘good respect’ for the businesswoman following their breakup, but he later made it clear that her children were a source of ire in their romance.

Ivana’s ex slammed the children she shares with the current president in July, calling them ‘disgusting’ and ‘stupid’ while claiming they had been ‘rude’ to him. 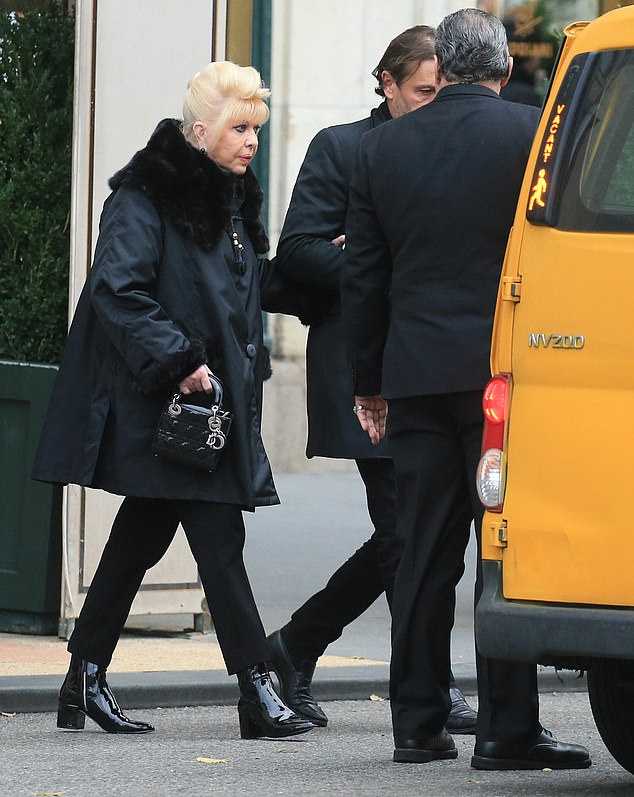 Taking charge: Rossano led the way after they hailed a taxi outside of the popular restaurant

Support: Ivana held onto her former beau as he  helped her get into the back seat 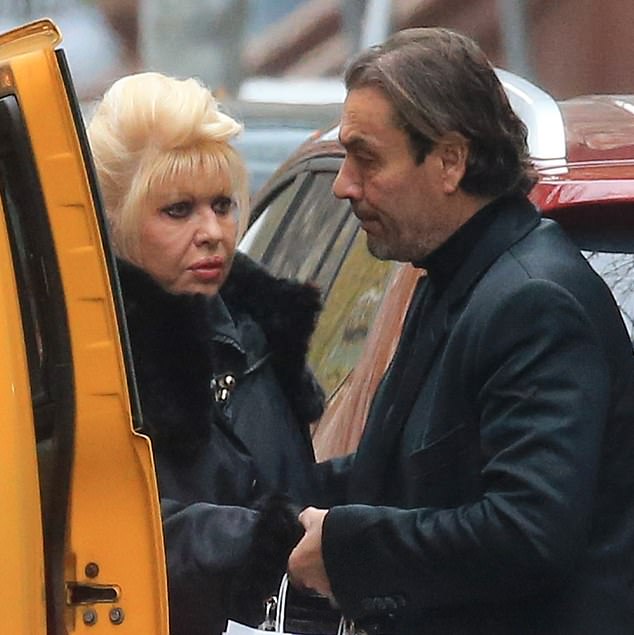 Multitasking: Rossano held onto Ivana’s hand and the takeout bag from Cipriani

Rossano emphasized that he wasn’t after the matriarch’s fortune and suggested that money was often something he quarreled with her children about.

The former couple dated for six years before they tied the knot in 2008 during a lavish $3 million ceremony at Mar-A-Lago, the Palm Beach estate owned by none other than Ivana’s second ex-husband, Donald Trump.

Ivana said she had actually filed for separation three months prior and blamed the split on her and Rossano’s different preferences for their cities of residence.

The couple had faced rumors that Rossano had been unfaithful to her while filming the TV show Survivor in Honduras, which Ivana denied in her Page Six column just a month before announcing their split. 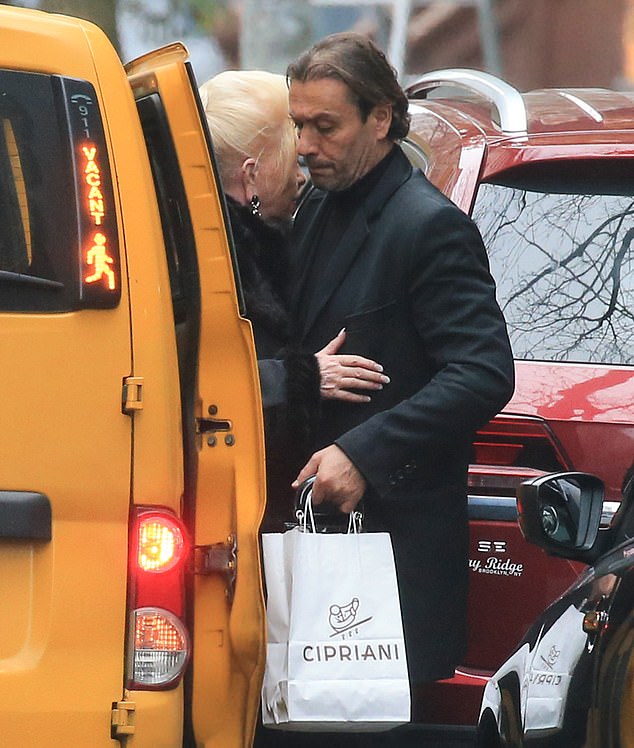 Back on? The reunion comes five months after Ivana announced they had ended their relationship because she wanted to be a ‘free woman’ 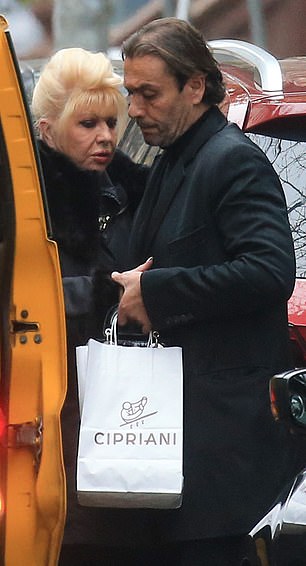 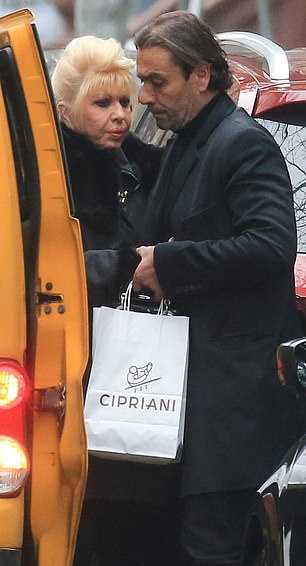 Hard to tell: It’s unclear if they will be spending the Thanksgiving holiday together 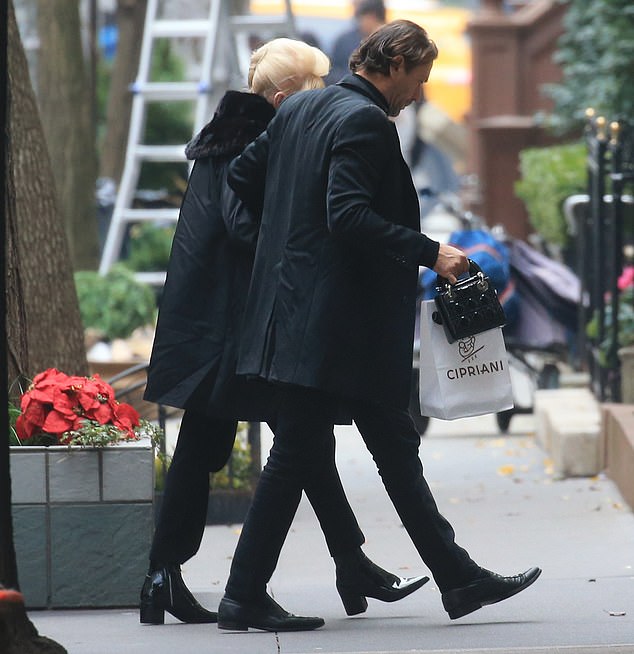 Together: Rossano was with Ivana when she headed back inside her townhouse 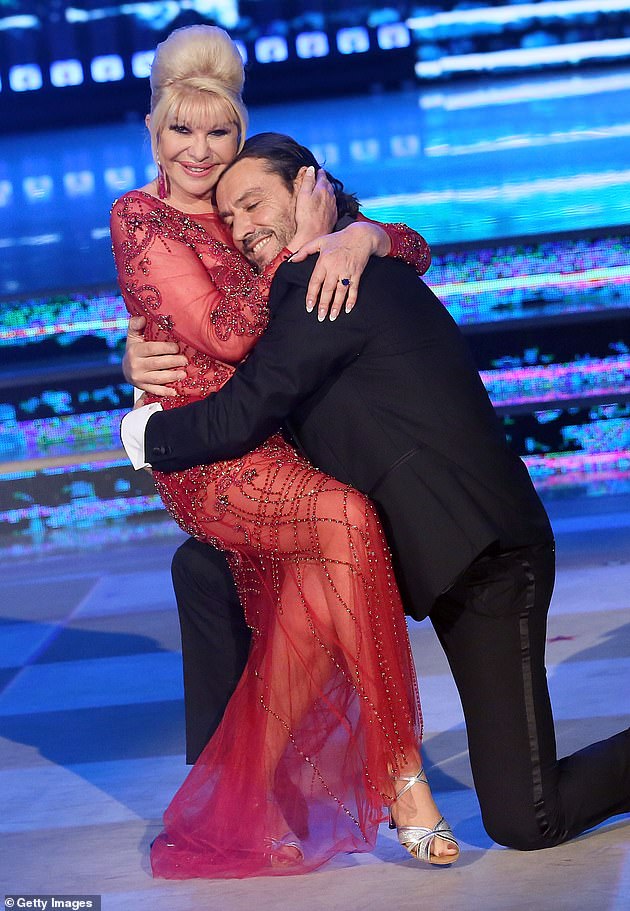 Over: Ivana announced in June that she and Rossano had broken up. They’re pictured on Italy’s Dancing with the Stars last year 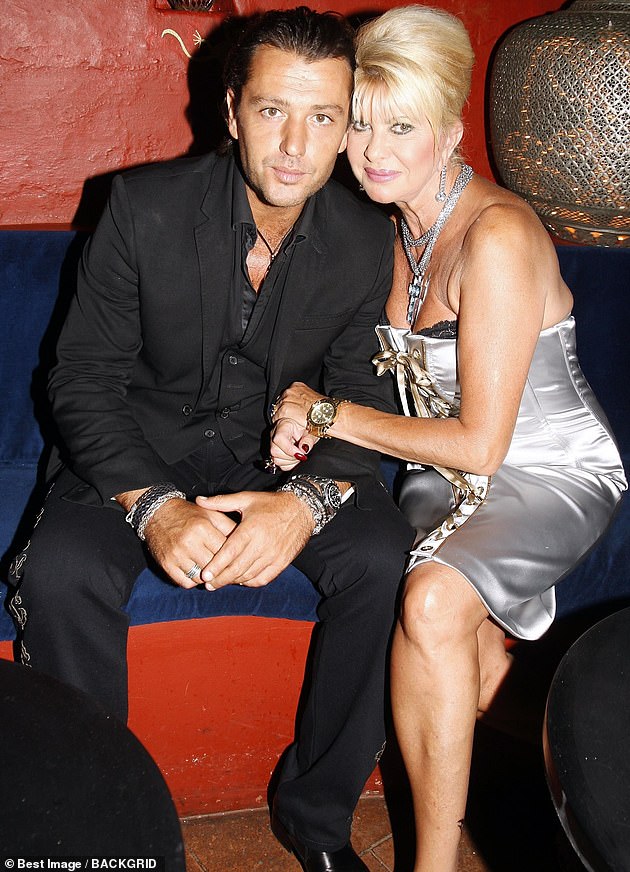 Look of love: The former couple, pictured in 2007, dated for six years before they tied the knot in 2008. They divorced just months later in 2009, only to reunite shortly after

Rossano was Ivana’s fourth husband after Alfred Winklmayr, Donald, and Riccardo Mazzucchelli, but the two didn’t stay apart for long.

They reunited shortly after their divorce and spend a great deal of time together until Ivana announced in June that she had broken up with him.

The Raising Trump author’s kids — Donald Jr., Ivanka, and Eric — are all grown up now with children of their own, and Ivana stressed that she has no desire to get married again nor does she really have an interest in dating.

‘I don’t want to get married again,’ she told Page Six. ‘I’m done. You get married because you want a family. I have three kids and grandkids. I just want to be free and go where I want to go with whoever I want. I want to be a free woman.’

The socialite went on to say that while she doesn’t want a boyfriend, she does ‘like to have companions’ to spend time with.

‘I have plenty of men who take me for lunches and dinners and balls or charity events,’ she explained. ‘I don’t want to be attached.’