Ivanka Trump honored missing and murdered women with a sartorial tribute on Monday as she helped to celebrate the opening of an office that is dedicated to investigating cold cases involving Indigenous peoples.

The 38-year-old stood out from the crowd in her vibrant red Sandro suit – a design that she chose specifically because of the color, which represents missing and murdered women.

Ivanka was the guest of honor at the opening of the first ever Missing and Murdered Native American Cold Case Office, where she was invited to cut a large red ribbon signifying its official launch.

Tribute: Ivanka Trump honored missing and murdered women by wearing red on Monday as she attended the opening of the first Missing and Murdered Native American Cold Case Office 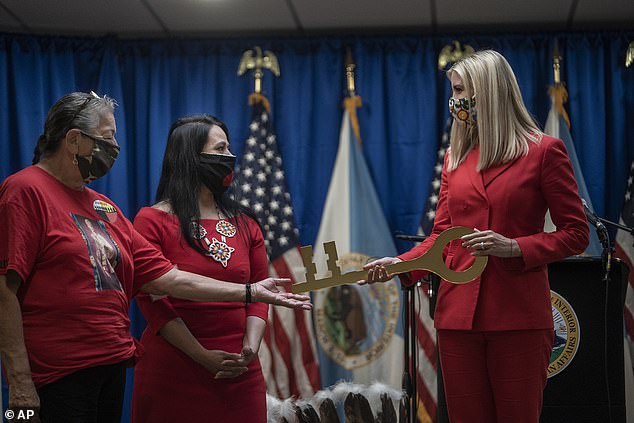 Emotional: The 38-year-old specifically chose her red Sandro suit because of the color, which represents missing and murdered women 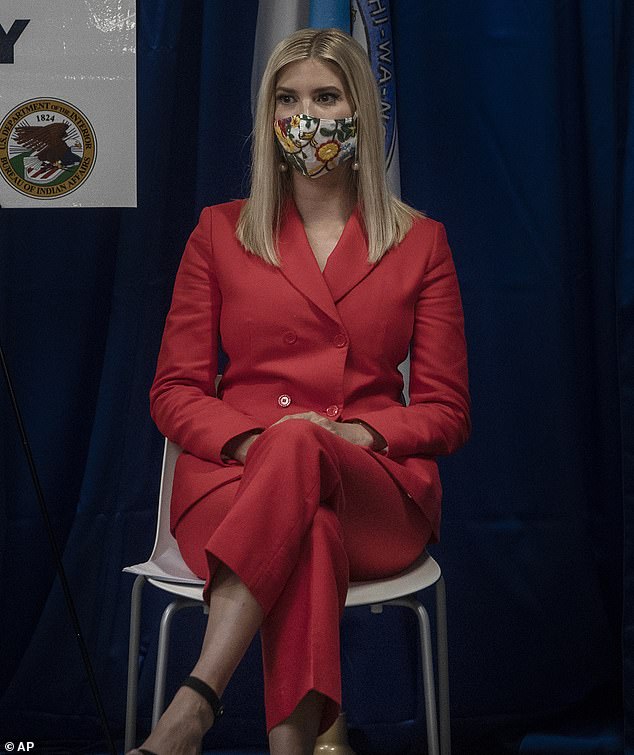 Important: ‘This historic day is another fulfillment of the promise that under President Trump, he will always fight for the forgotten men and women across our country,’ she wrote

‘The Trump Administration is committed to advancing policies that empower tribal communities and ensure that all Americans live with dignity and the promise of a brighter future,’ Ivanka wrote in an Instagram post, while sharing images from her visit.

‘This historic day is another fulfillment of the promise that under President Donald Trump, he will always fight for the forgotten men and women across our country.’

The special adviser to the President – who wore a patterned face mask for her visit – shed light on several devastating statistics about the crimes that Native and Indigenous women face, revealing in her Instagram Stories: ‘Research shows that in the lifetimes of Native or Indigenous women… 34 per cent are raped; 39 per cent are victims of domestic abuse.’

The post then revealed that Native and Indigenous women are 2.5 times as likely to ‘experience violent crimes’, and are also two times more likely ‘to be raped or sexually assaulted compared to all other races’.

The opening of the new office comes after President Trump signed an Executive Order establishing a Task Force on Missing and Murdered American Indians and Alaska Natives – otherwise known as Operation Lady Justice – in November. 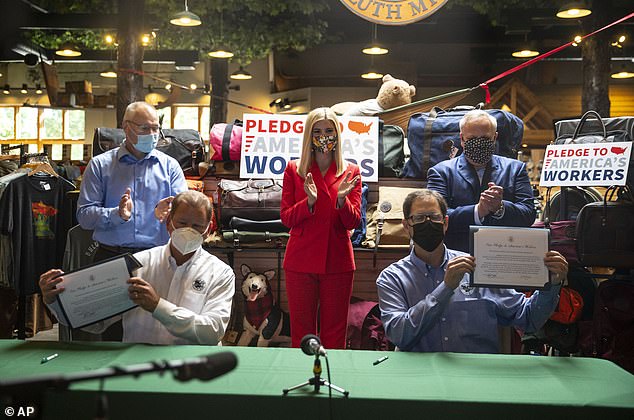 Working hard: Before her visit to the Cold Case Office, Ivanka enjoyed a tour of a local factory owned by outdoor apparel company Duluth Pack 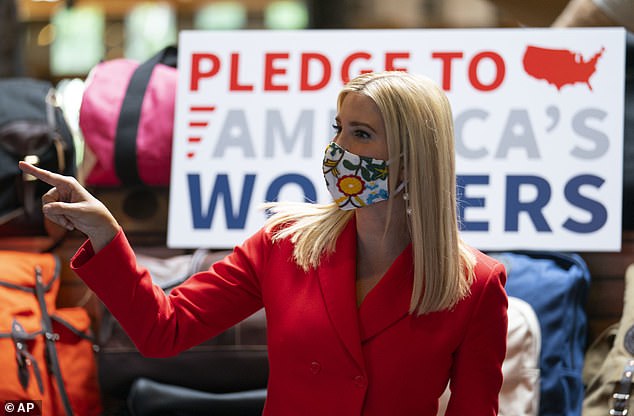 Spreading a message: At the factory, Ivanka promoted Trump’s Pledge to America’s Workers, an initiative that she helped to launch two years ago and has spearheaded ever since 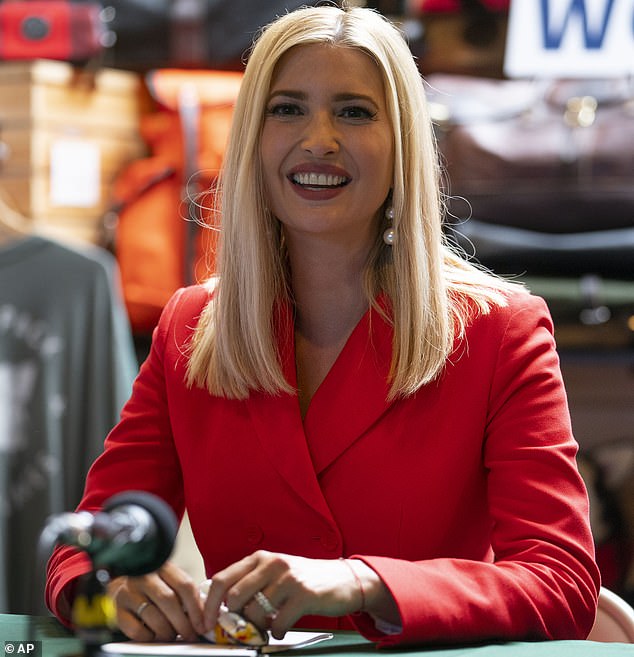 Milestone: ‘This visit will highlight the administration’s commitment to increasing access to skills training for all Americans and to supporting U.S. manufacturing,’ a spokesperson said 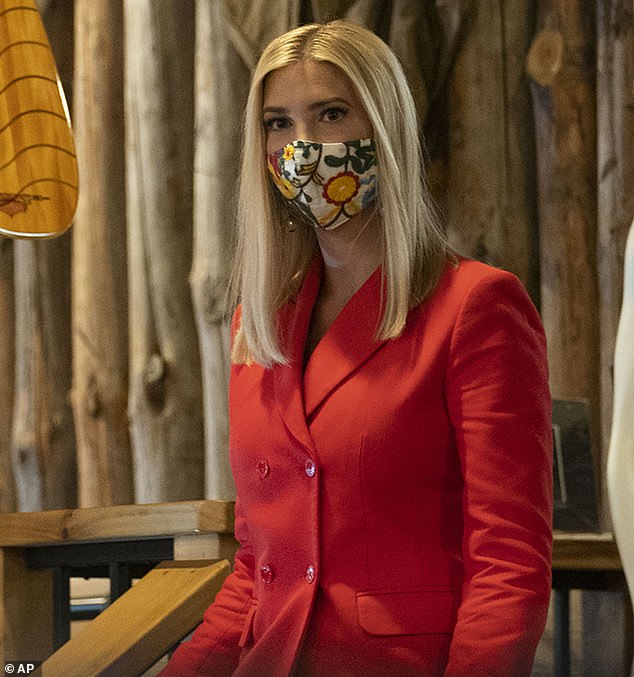 History: The Duluth Pack factory is the oldest canvas and leather pack manufacturer in the U.S. 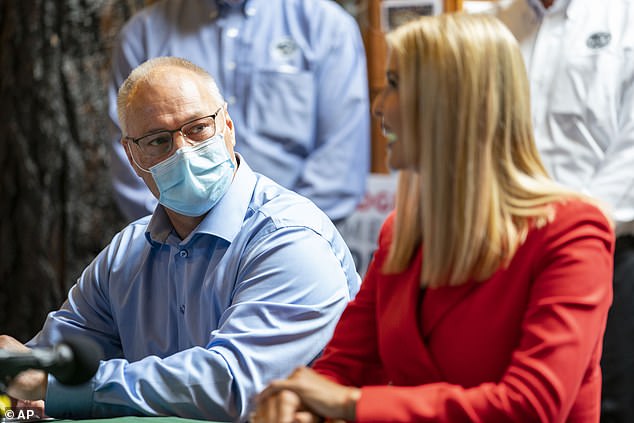 Company: Ivanka was joined on the trip by US Representative Pete Stauber

‘The Trump Administration in 2019 formed Operation Lady Justice, a long overdue federal task force that enhances the operation of the criminal justice system and addresses concerns or the Indian Country on missing and murdered people – particularly women and girls,’ Ivanka explained on her Instagram Stories.

‘Today as we continue our steadfast efforts in supporting tribal communities, we opened the first ever US Missing and Murdered Cold Case Office in Bloomington, MN which alone will serve 36 tribes throughout the Midwest.’

Before her visit to the Cold Case Office, Ivanka enjoyed a tour of a local factory owned by outdoor apparel company Duluth Pack, where she promoted Trump’s Pledge to America’s Workers, an initiative that she helped to launch two years ago.

‘This visit will highlight the administration’s commitment to increasing access to skills training for all Americans and to supporting U.S. manufacturing,’ a spokesperson for Ivanka said of the trip.

‘The Pledge to America’s Workers to date touts more than 16.3 million opportunities pledged by over 440 companies.’

Taking to Instagram not long after her tour of the factory, the First Daughter praised the company for committing to the workers initiative. 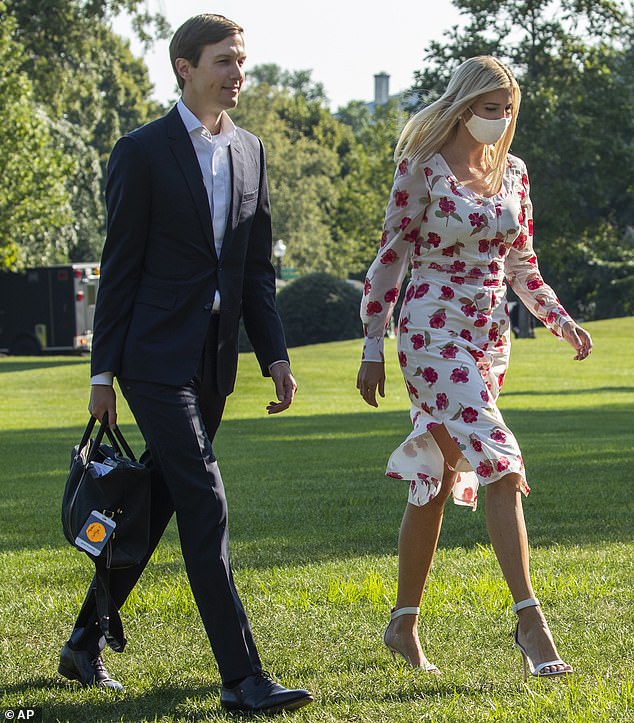 Getaway! The First Daughter and her husband Jared Kushner spent the weekend with her father at his golf club in Bedminster, New Jersey 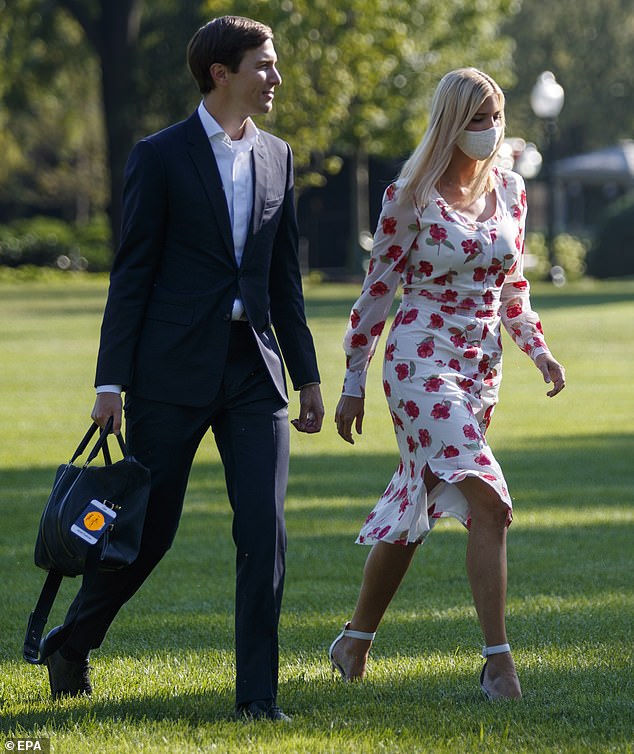 Safety first: The couple was seen landing back in Washington, D.C., with Ivanka looking chic in a floral dress and a matching white mask 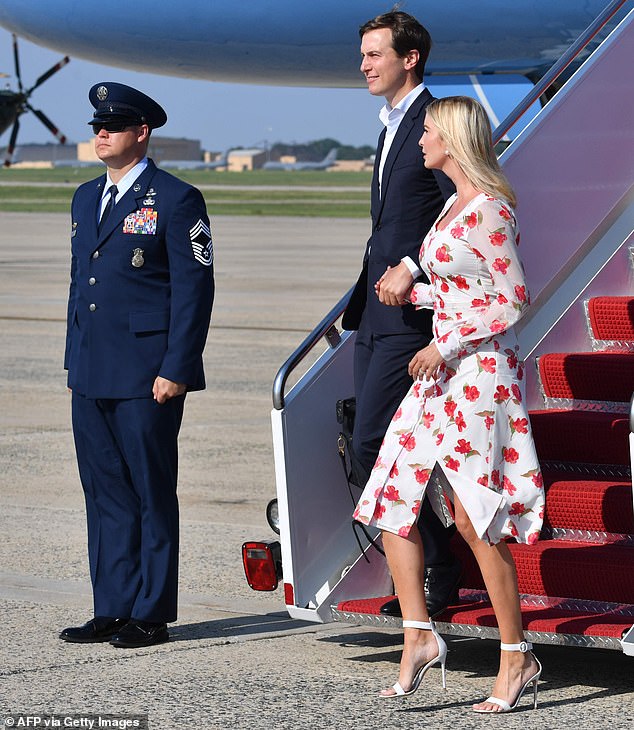 Private time: It is not thought that Ivanka and Jared’s children joined them for the weekend 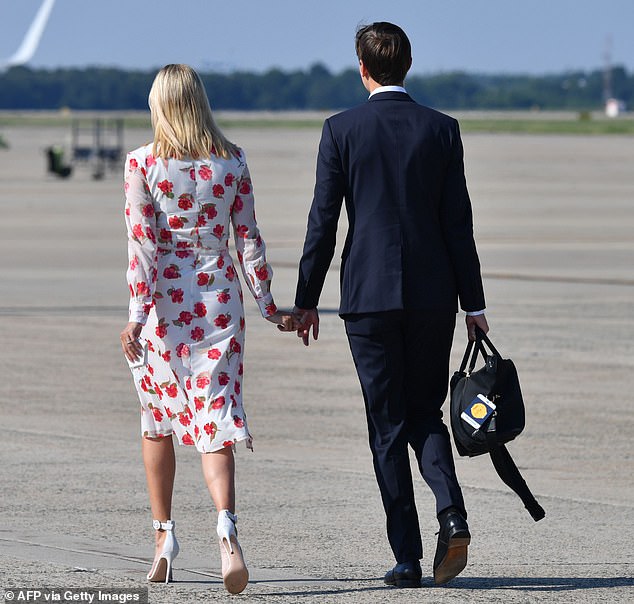 Romantic: The couple held hands as they strolled across the tarmac at Joint Airbase Andrews

‘Today we visited the oldest canvas and leather pack manufacturer in the U.S., founded in 1882 in Duluth, MN,’ she wrote.

‘For 138 years, @duluthpack’s Made in America products have stood the test of time! Proud to announce their commitment to expanding their training + education opportunities through our #PledgetoAmericasWorkers! These commitments large or small are more important now than ever!’

Ivanka’s busy day came after she and her husband Jared Kushner joined her father for the weekend at his golf club in Bedminster, New Jersey.

The couple were seen landing back at Joint Airbase Andrews on Sunday evening, with Ivanka looking incredibly chic in a floral-print white dress – while Jared, 39, wore his signature navy suit and carried a briefcase in his hand.

After they disembarked Air Force One, Ivanka added a plain white face mask to her ensemble – however Jared chose to remain without one.

The weekend away was no doubt a welcome distraction for both Ivanka and Jared after it was revealed on Thursday morning that a man had been taken into custody by Secret Service outside of their Washington, D.C. home. 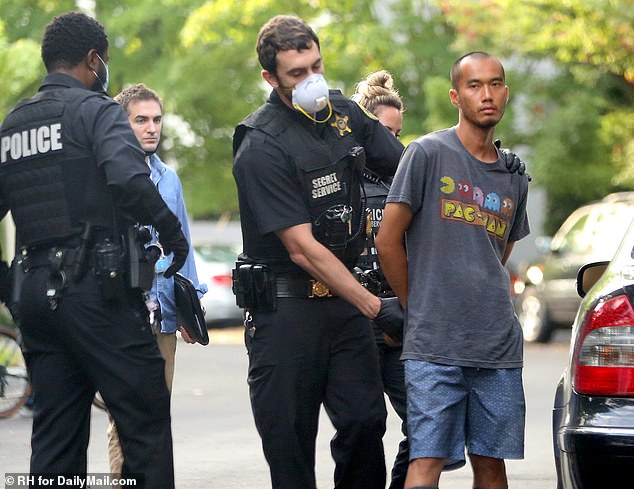 Shocking: The weekend away no doubt came as a welcome break after a man was taken into Secret Service custody on Thursday morning outside of Ivanka’s Washington, D.C. home 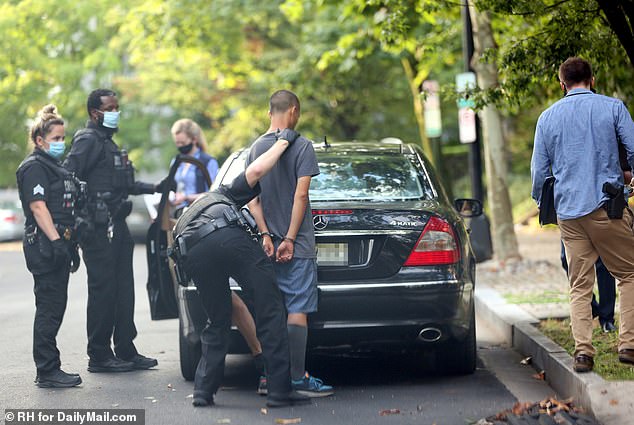 Confrontation: The young man was seen in a Mercedes parked outside of the home before being confronted by agents 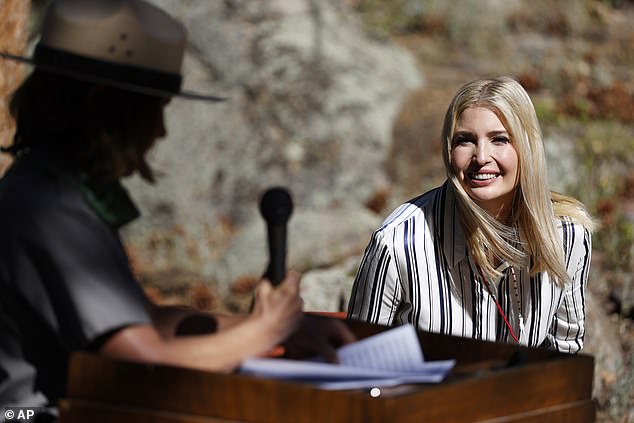 Escape: Luckily Ivanka was not there at the time, having already left for a two-day trip to Denver, Colorado 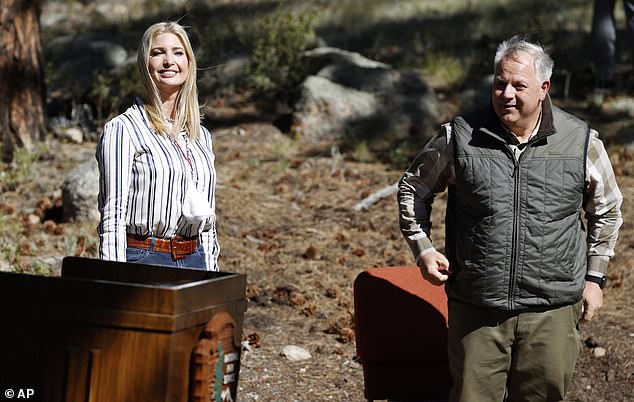 An eyewitness told DailyMail.com exclusively that a young man in a black Mercedes-Benz was parked in front of the president’s daughter’s home on Thursday morning and was seen being questioned by the Secret Service. 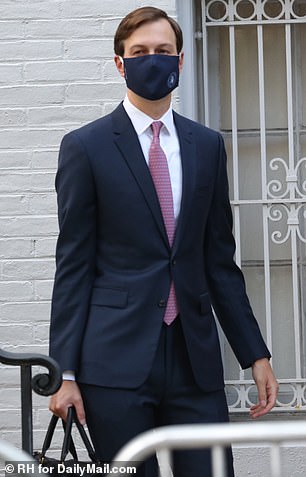 Narrow escape: About 10 minutes after the man was put in the van, Jared Kushner was seen emerging from the home

Uniformed agents were seen pulling the man, who was wearing a Pac-Man T-shirt out of his car, cuffing him and putting him in a van.

Ivanka was nowhere near the early morning confrontation after leaving for a two-day tour of Denver, Colorado before the incident took place. But about 10 minutes after the man was put in the van, her husband Jared was seen emerging from the home.

It’s unclear why the unidentified man was waiting outside of her home or what his intentions were.

DailyMail.com photos show him sitting on the curb while handcuffed with his shoes off. Agents were later seen back at the house towing the man’s car.

Ivanka posted a photo of herself on an airplane Wednesday evening wearing a floral embroidered face mask with the caption, ‘Taking off!’ DC to Colorado.’

The morning of the incident, she tweeted: ‘I am in Colorado today w/ Secretary Bernhardt + @SenGardner to celebrate yesterday’s passage of the #GreatAmericanOutdoorsAct; a landmark bill that will allocate billions to our public lands making it the most consequential conservation legislation since Pres Theodore Roosevelt!’

She also tweeted that she would be visiting Rocky Mountain National Park Thursday morning.