Ivanka says she believes father is not sexual harasser

Ivanka Trump defended her father when asked if she believes the many women accusing the president of sexual misconduct.

In an interview with NBC News in PyeongChang, South Korea, where she attended the Olympic closing ceremonies on Sunday, the first daughter was asked if she believes her father’s accusers.

‘I think its a pretty inappropriate question to ask a daughter if she believes the accusers of her father, when he has affirmatively stated that there is no truth to it. I don’t think that’s a question you would ask many other daughters,’ the 36-year-old White House advisor said. 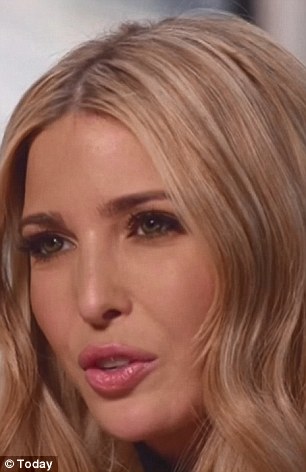 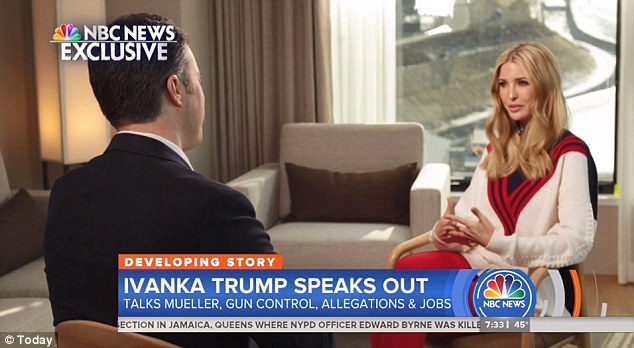 The first daughter made her comments during an interview in PyeongChang, South Korea for the Olympics closing ceremony 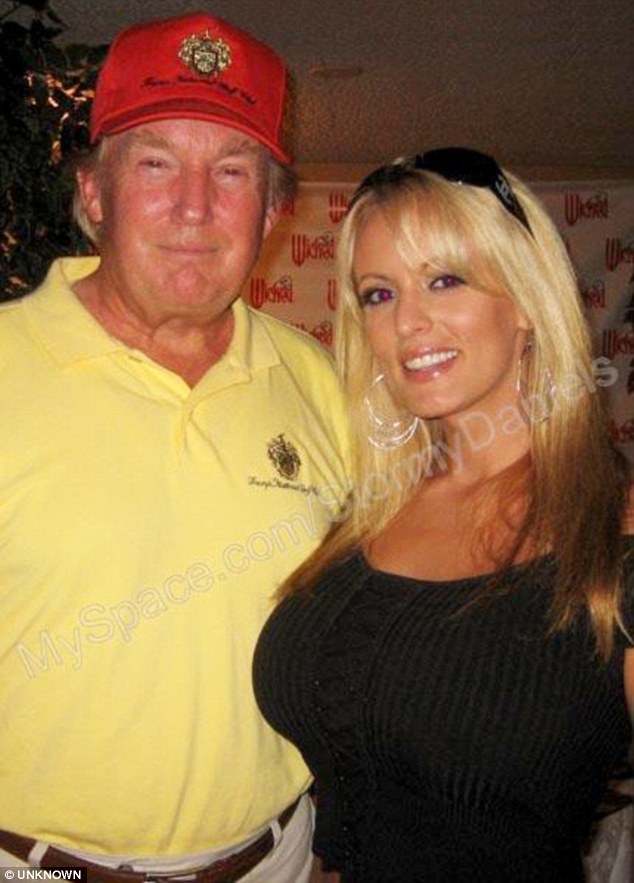 In the lead up to the 2016 presidential election, more than a dozen women came forward and detailed how Trump had sexually harassed them.

Many of the women described how the real estate tycoon targeted them with unwanted touching and kissing.

Trump denied all of the accusations during the race and while the stories caused scandal, it wasn’t enough to swing the election in Hillary Clinton’s favor.

In his first year in office, new allegations came to light about Trump’s alleged cheating on his wife, first lady Melania.

Daniels has since refuted that they had a sexual relationship. 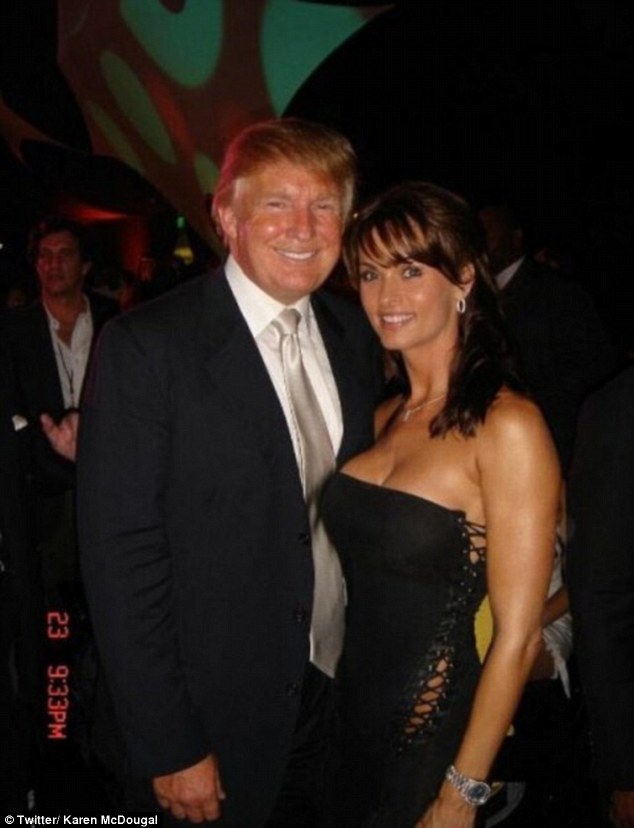 Earlier this month, Karen McDougal, a former Playboy Playmate, told the New Yorker that she also had an affair with the Donald, which started shortly after Melania gave birth to their son Barron. McDougal and Trump pictured above 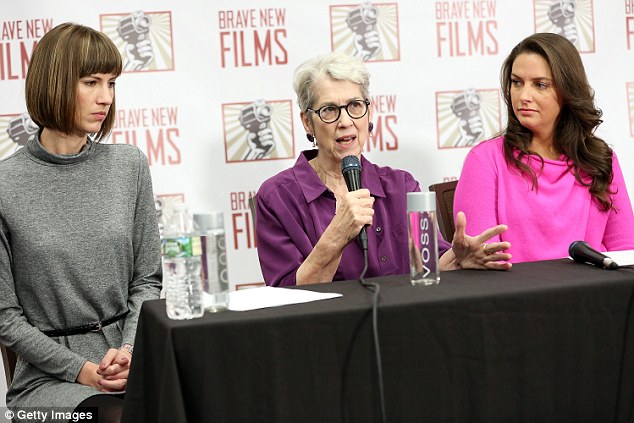 Michael Cohen, the president’s lawyer, said he ‘vehemently denies any such occurrence as has Ms. Daniels’

And that’s not all. Earlier this month, Karen McDougal, a former Playboy Playmate, told the New Yorker that she also had an affair with the Donald, which started shortly after Melania gave birth to their son Barron.

President Trump has denied the affair through a spokesperson, with the White House stating: ‘This is an old story that is just more fake news. The President says he never had a relationship with McDougal.’

Also during the NBC interview, Ivanka was questioned about the investigation by special counsel Robert Mueller into Russian meddling in the 2016 presidential election. 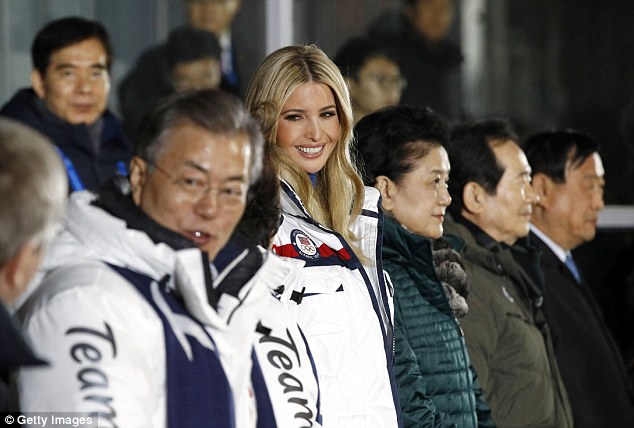 Ivanka Trump (C) daughter of U.S. President Donald Trump, stands at the beginning of the closing ceremony of the 2018 Winter Olympics 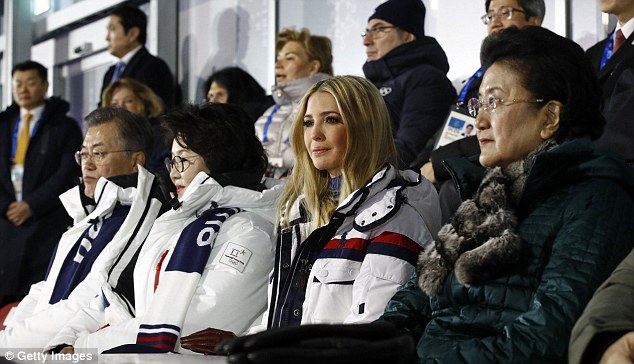 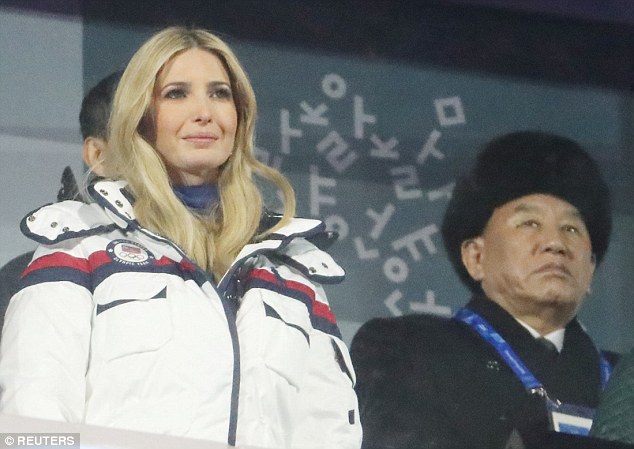 ‘Consistently we’ve said there was on collusion, there was no collusion. And we believe that Mueller will do his work and reach the same conclusion,’ she said.

She added that she thinks Mueller can be trusted to conduct the investigation, and revealed that she has not yet been interviewed by the special counsel.

Ivanka also weighed in on her father’s proposed plan to give teachers guns after the Florida school shooting.

When asked if she thought about the idea, she said: ‘To be honest, I don’t know.’ 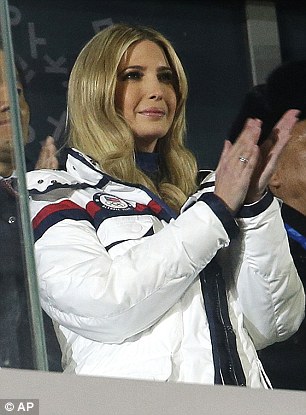 The 36-year-old White House is currently overseas leading the U.S. presidential delegation to the closing ceremony of the Olympic Winter Games Feb. 25, 2018

‘Obviously, there would have to be an incredibly high standard for who would be able to bear arms in our school. But I think there is no one solution to creating safety,’ she said.

The President’s eldest daughter was then asked if she would be advising the commander-in-chief on the issue, which he proposed earlier this week via Twitter.

‘I think that having a teacher who is armed who cares deeply about her students or his students and who is capable and qualified to bear arms is not a bad idea, but it is an idea that needs to be discussed,’ Trump added.

President Trump made the suggestion in the wake of a deadly school shooting earlier this month in Parkland, Florida, where 19-year-old Nikolas Cruz stormed his former high school and killed 17 people with an AR-15 semiautomatic rifle.

The president proposed a controversial bill on Wednesday to provide as many as 20 percent of teachers with concealed and carry permits after meeting with students from Marjory Stoneman High School.

He beefed up his proposal saying educators who chose to have weapons in their classroom would receive a ‘yearly bonus’.

He doubled down on the proposal on Saturday, stating in a tweet: ‘Armed Educators (and trusted people who work within a school) love our students and will protect them.

‘Very smart people. Must be firearms adept & have annual training. Should get yearly bonus. Shootings will not happen again – a big & very inexpensive deterrent. Up to States.’ 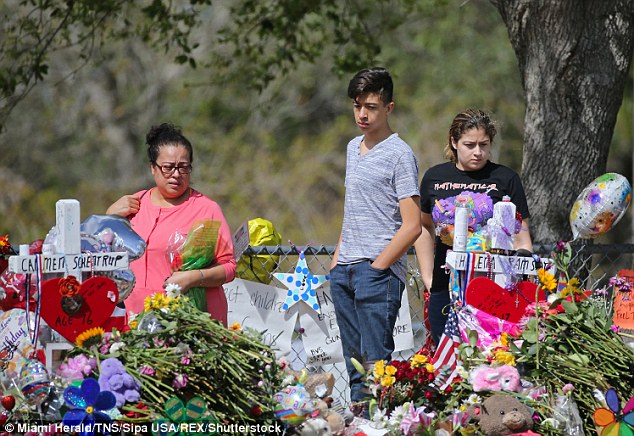 Mourners bring flowers as they pay tribute at a memorial for the victims of the shooting at Marjory Stoneman Douglas High School on Sunday Feb 25, 2018

Trump explained in his tweet the use of teachers would be a ‘very inexpensive deterrent’ compared to the cost of extra security guards.

But only the most ‘adept’ teachers would be allowed to wield weapons. He insisted every educator would be required to have annual training.

Trump’s initial proposal on Wednesday to arm 20 percent of teachers was criticized as excessive – that’s roughly 650,000 of the nation’s educators – but the president insisted in a tweet that it would be a ‘GREAT DETERRENT’ to potential shooters.

Ivanka also spoke to NBC about the America’s relationship with North Korea, which has deteriorated even further from an already low standing since Donald Trump took office in January 2017.

‘We are 50 miles away from North Korea, so affirming the U.S. position and our joint position of maximum pressure with our South Korean partners is very important,’ she said.

Ivanka arrived in Pyeongchang on Friday just days before the closing ceremony for the 2018 Winter Games.

Upon her arrival in South Korea, Ivanka told reporters:  ‘It is a great honor to be here in South Korea with the U.S. delegation. We are very, very excited to… cheer for Team USA and to reaffirm our strong and enduring commitment with the people of the Republic of Korea.’ 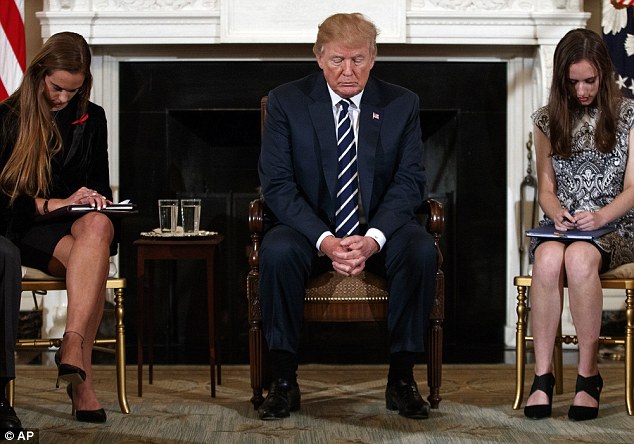