Ivanka Trump carried the bible President Donald Trump brandished in his controversial photo-op in her designer purse as she joined administration officials in the walk from the White House to St. John’s Church.

Trump, who serves as an adviser to the president, handed her father the bible from her white Max Mara purse, which retails for $1,540, when the group reached the church Monday evening after crossing Lafayette Park, which had been cleared of peaceful protesters ahead of their visit.

She was asked to carry it simply because she had her hand bag with her for the walk, DailyMail.com learned.

President Trump is facing an on-slot of criticism for posing in front of the boarded-up 104-year-old Episcopal Church in Lafayette Square, across the street from the White House, in a photo-op orchestrated by Trump adviser Hope Hicks.

Hicks has been identified as having helped hatch the plan for the staged event that saw police and National Guard forces facilitate by using tear gas and rubber bullets to clear away peaceful protesters.

The move was conceived as a way to allow Trump to demonstrate his self-proclaimed role as the ‘law and order president’ and – came after the president vowed to use the military to restore order in cities across the country after protests broke out nation wide following the death of George Floyd, a black man who died after a white cop knelt on his neck for eight minutes.

As a PR move, Trump’s photo-op may have backfired, after global and national media broadcast images of shield-bearing and mounted police using force to clear Lafayette Park, an area whose use as a forum for demonstrations and speech has long been protected. 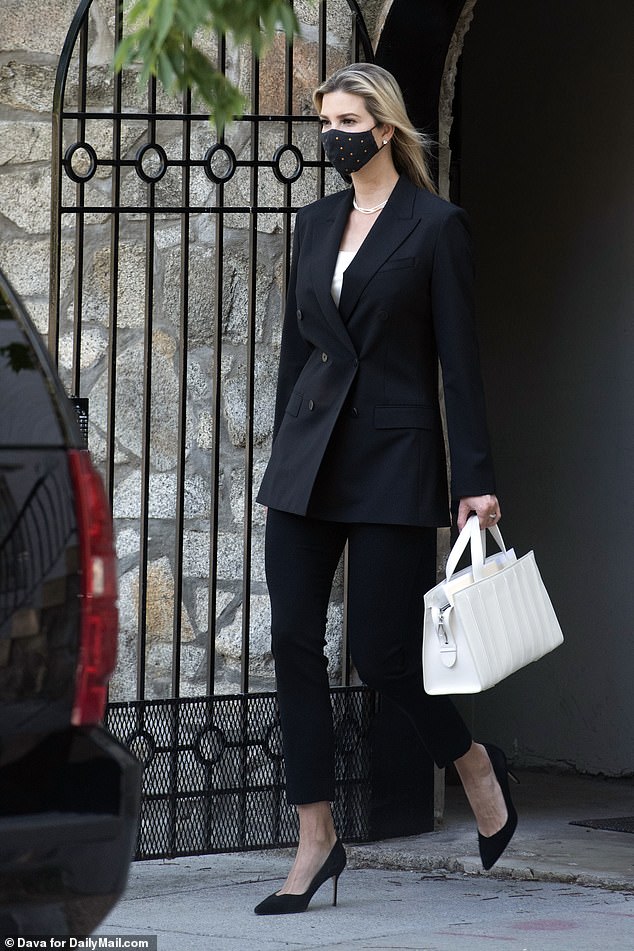 Ivanka Trump leaves her Washington D.C. home on Monday morning to head to work at the White House, carrying her white Max Mara bag, which retails for $1,540 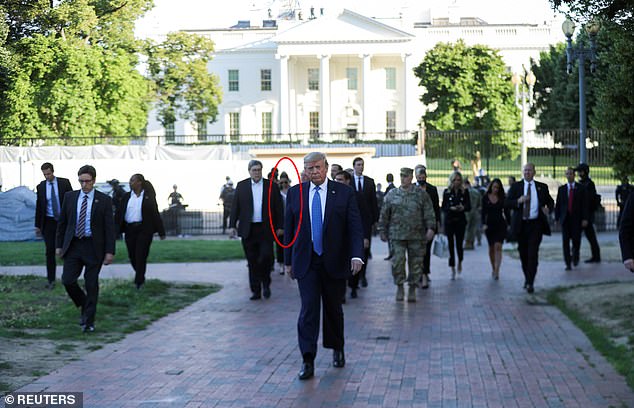 Counselor to the president Hope Hicks joined President Trump as he walked to St. John’s Episcopal Church across from the White House. She is credited with helping hatch the idea for him to pose for pictures there; and Ivanka Trump can be seen in the back of the group carrying her white hand bag 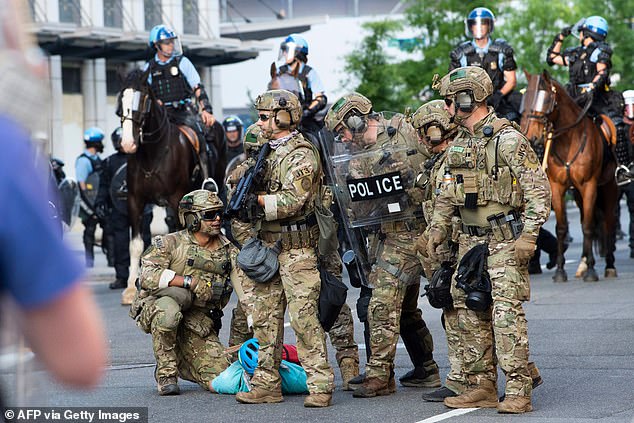 Protesters were cleared from the area and some arrested ahead of President Trump’s visit to St. John’s church

Hicks accompanied Trump as he walked across Lafayette Park to pose at the church. As did Ivanka Trump and her husband Jared Kushner. Kushner is a senior adviser to the president and Hicks works in his office.

None of the three advisers joined some of their administration colleagues who posed with President Trump in front of the church, as he stood, bible in hand.

The contrasting image of the president in front of a church holding a bible compared with images of protesters being gassed and arrested has resulted in a wave of outrage.

Mariann Budde, the Bishop of the Episcopal Diocese of Washington which oversees the church, said she was ‘outraged’ by the action. ‘The president cleared the park and courtyard of our church… stood in front of St Johns as if it were spiritual validation and justification for a message that is antithetical to the teachings of Jesus and God of justice,’ she said.

D.C. Mayor Muriel Bowser, who had ordered a 7 pm curfew Monday, said she was ‘shocked’ that people who didn’t seem to provoke attack were ‘attacked’ by federal law enforcement who cleared the way for Trump.

Joe Biden suggested that Trump open a Bible ‘instead of brandishing it,’ as the president did outside St. John’s Church.

‘I will seek to heal the racial wounds that have long plagued this country – not use them for political gain,’ the presumptive Democratic nominee pledged in a speech in Philadelphia on Tuesday.

Speaker Nancy Pelosi brandished her own bible on Tuesday to chastise the president.

The speaker held up her bible, in a counter to President Trump brandishing a bible on Monday afternoon, to read from Ecclesiastes 3: 1-8, focusing on its message of a ‘time to heal.’

‘Let’s focus from time to time to heal,’ she said during an event in the U.S. Capitol. ‘We would hope that the President of the United States would follow the lead of so many other presidents before has to be a healer in chief and not a fanner of the flame.’

The walk outside the White House gates – the first as president by the heavily-guarded Trump – came after he had been confined at home for more than a day.

Trump had been upset by the disclosure that Secret Service had taken him to bunker deep beneath the White House as police clashed with protesters Friday night, the Washington Post reported, and wondered why someone would disclose it to the press.

Although he was not there long, it clashed with the image of strength Trump usually likes to put forward.

Although Trump traveled to Florida to watch a rocket launch Saturday and addressed the death of George Floyd during his arrest by Minneapolis police officers, he had not been seen since a new wave of protest and violence erupted that night. 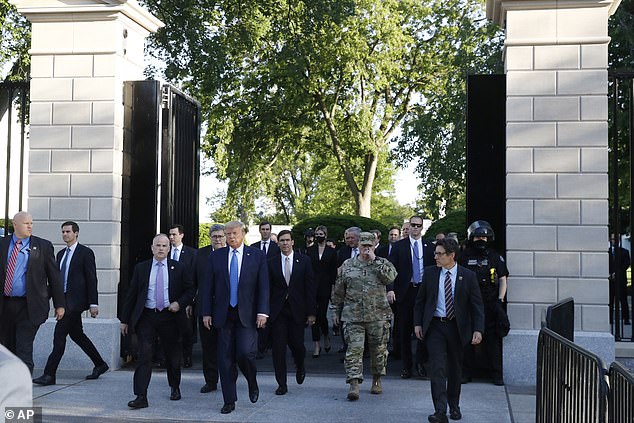 President Trump walked out of the White House surrounded by Cabinet officials, aides and security; Jared Kushner and Ivanka Trump can be seen coming out of the gate behind him 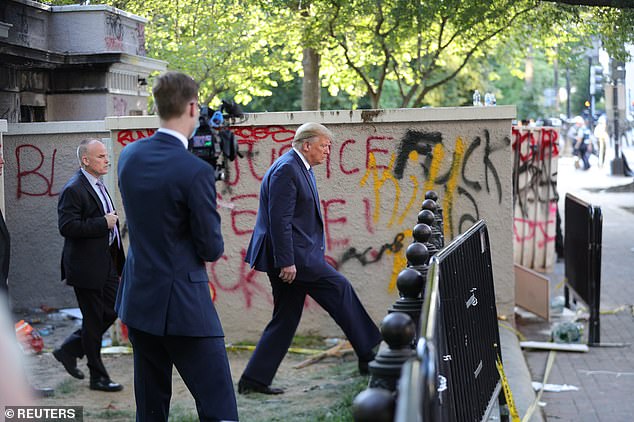 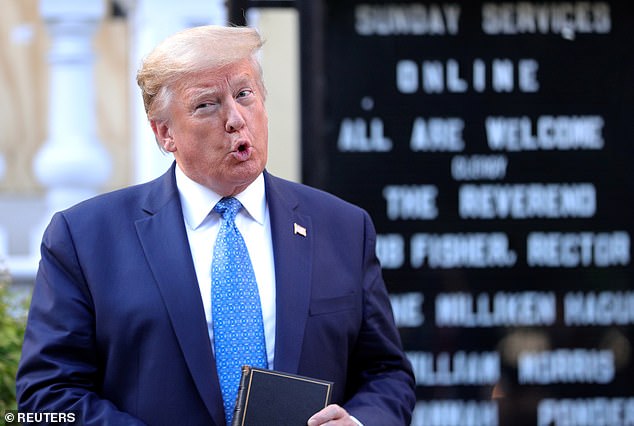 President Donald Trump holds a Bible as he talks to the media while standing in front of St. John’s Episcopal Church 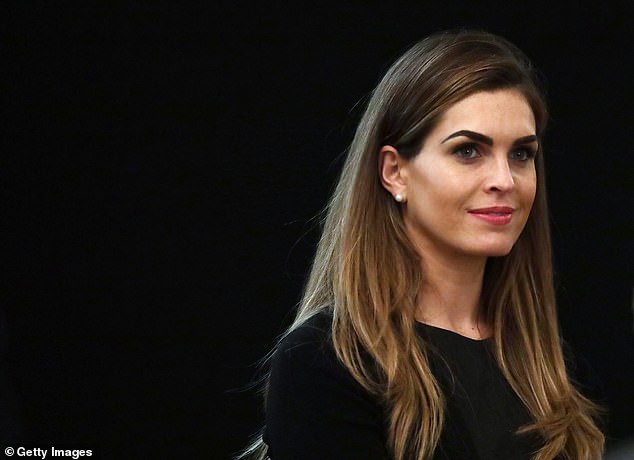 Counselor to the president Hope Hicks has been identified as helping hatch the plan to have Donald Trump walk across Lafayette Park to pose in front of St. John’s Church 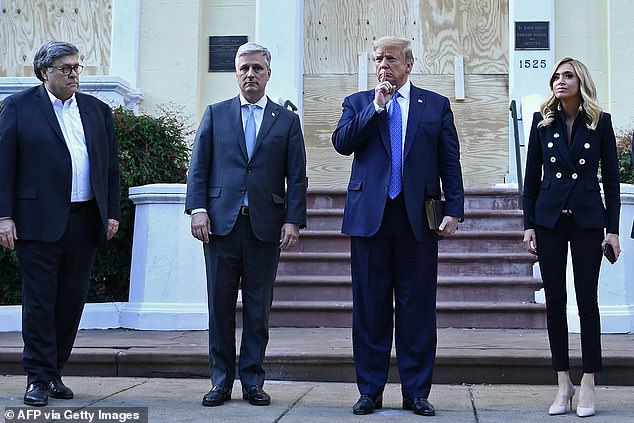 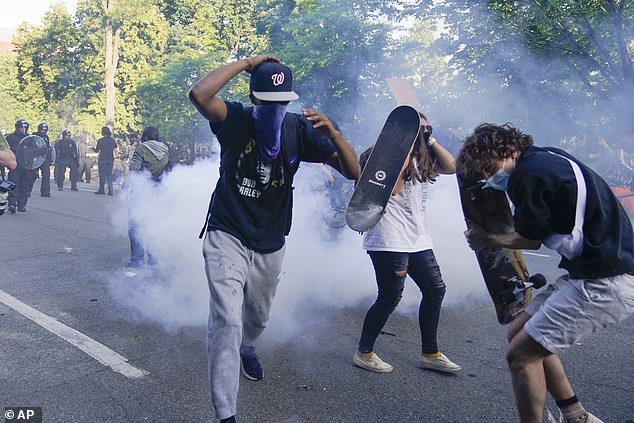 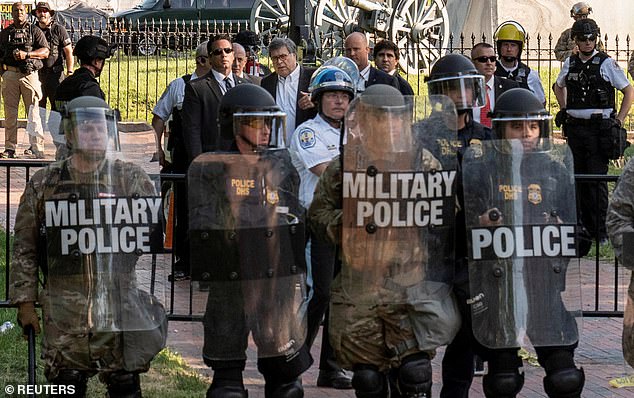 U.S. Attorney General Bill Barr confers with U.S. Secret Service and other officials in the center of Lafayette Park shortly before riot police cleared the park and the surrounding area across from the White House for President Donald Trump to be able to walk to a photo opportunity in front of St. John’s Episcopal Church, during a rally against the death in Minneapolis police custody of George Floyd, in Washington, U.S. June 1, 2020 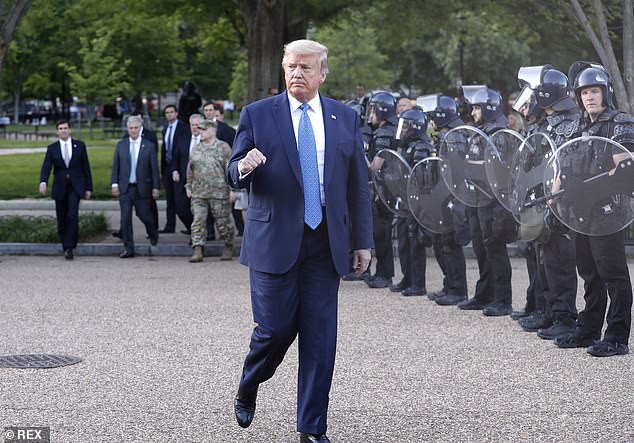 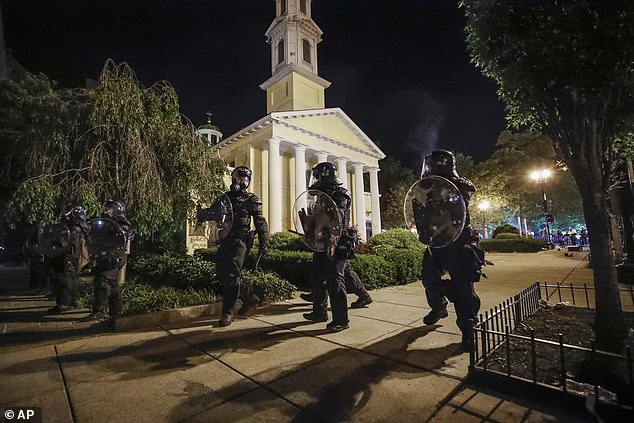 Police form a line infront of St. John’s Episcopal Church as demonstrators protest the death of George Floyd, Sunday, May 31, 2020, near the White House in Washington. Floyd died after being restrained by Minneapolis police officers (AP Photo/Alex Brandon)

Facing pressure to deliver a White House address, Trump instead decided to walk past a graffiti-prayed maintenance shack and tour the historic church, which had been scarred by fire amidst a spree of vandalism and looting Sunday night. The D.C. fire department was able to put out a blaze that broke out in the basement of the parish house adjacent to the church.

Longtime GOP operative Brendan Buck, a former spokesman for Speakers John Boehner and Paul Ryan when he was a vice presidential nominee, blasted the decision.

‘We long ago lost sight of normal, but this was a singularly immoral act,” he said.

“The president used force against American citizens, not to protect property, but to soothe his own insecurities. We will all move on to the next outrage, but this was a true abuse of power and should not be forgotten,’ he said, the Washington Post reported. He earlier tweeted what happened is ‘immoral and abusive.’

Hicks was Trump’s longtime press aide, following him from the Trump Organization to the White House. She served as White House Communications Director before leaving to take a position with the Fox Corporation, then returning as a counselor to the president this year.

Shortly before he left the White House grounds Monday to visit the church at 7:03 pm, Trump said from the Rose Garden he was ‘taking swift and decisive action to protect our great capital, Washington, D.C.’

‘What happened in this city last night was a total disgrace. As we speak, I am dispatching thousands and thousands of heavily armed soldiers, military personnel, and law enforcement officers to stop the rioting, looting, vandalism, assaults, and the wanton destruction of property,’ Trump said.