The State of the Union is set to be a big night for the president – and it seems his family are keen to make the most of the special occasion, with Ivanka Trump hosting a cozy family dinner for her siblings at her D.C. home before the group headed off to support Donald Trump at the Capitol.

Ivanka, 36, shared a short and sweet video clip from the family gathering, showing the group sitting around the large wooden dining table at her home, beaming happily at the camera while the first daughter addressed her followers.

‘A little family dinner before the State of the Union!’ she says, while perching one-year-old son Theodore on her lap, with the whole group laughing uproariously as the young boy tried to knock over a glass with a large toy car.

All together! Ivanka Trump and Jared Kushner hosted a family dinner at their D.C. home ahead of the State of the Union on Tuesday night 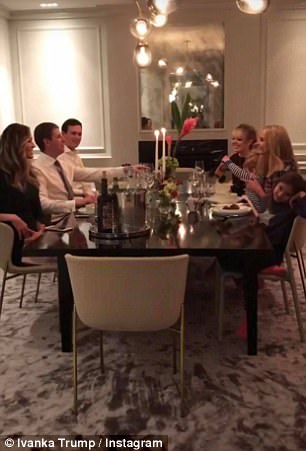 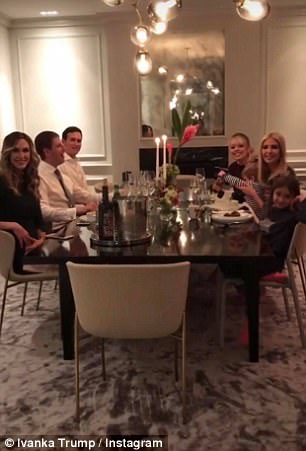 Gathering: Ivanka’s sister Tiffany, and her brother Eric and his wife Lara were in attendance, as well as Jared, and their children Arabella and Theodore, however Donald Jr. did not attend 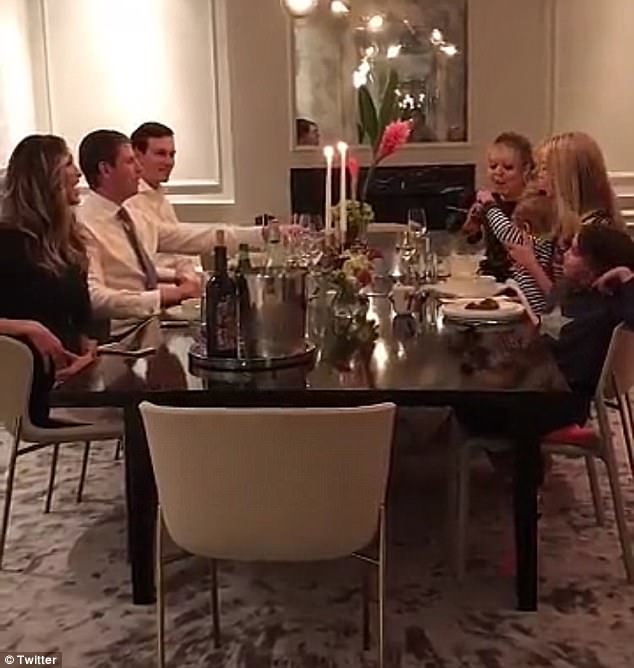 Naughty! At one point Theodore, who was perched on his mother’s lap, tried to knock over a glass with a toy car, but he was stopped in his tracks by his aunt Tiffany

Luckily Eric spotted the youngster’s plan and interrupted Ivanka’s speech to point out that a glass was about to go flying, as Theodore charged the large toy towards it.

Foiled by his aunt Tiffany, 24, who grabbed the car before it could cause any damage, Theo seemed blissfully unaware of the ceremonious occasion taking place around him as he played happily.

And while the youngster happily butted into his mother’s speech, Arabella could be seen sitting in front of Ivanka, looking happily at the camera while wearing a sweet sweater with a star on the front of it.

The video appears to have wrapped up by the time the video was filmed, with most of the places clear, and only six-year-old Arabella sitting in front of any remaining food.

But it seems that the importance of the night didn’t stop the family from celebrating with a toast or two, and there are several bottles of wine on the table, as well as candles and a bouquet of flowers. 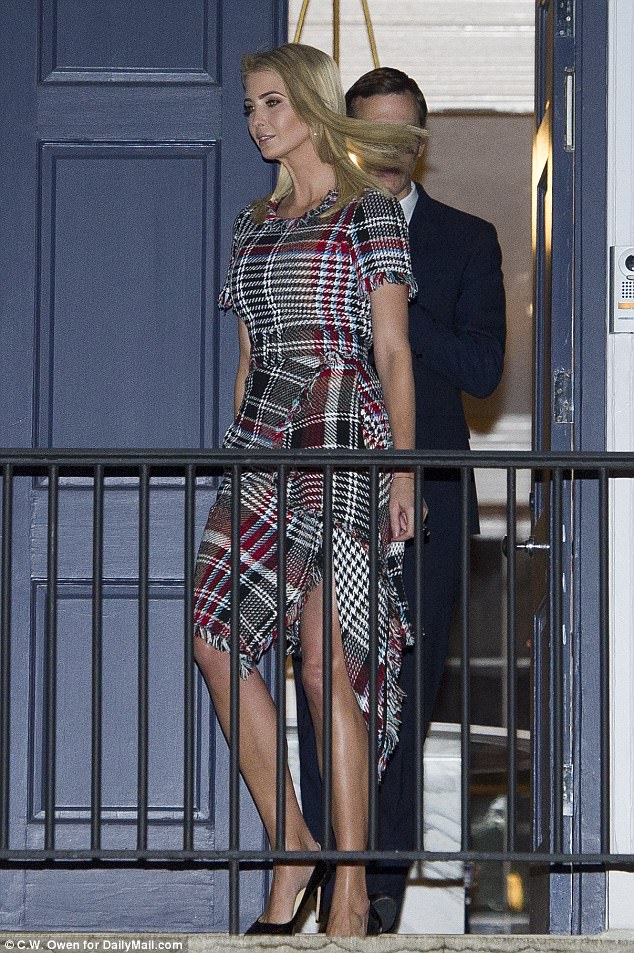 Hostess with the mostest: Ivanka and Jared left their home together, with the mother-of-three looking incredibly well put together in her $2,690 Oscar de la Renta dress 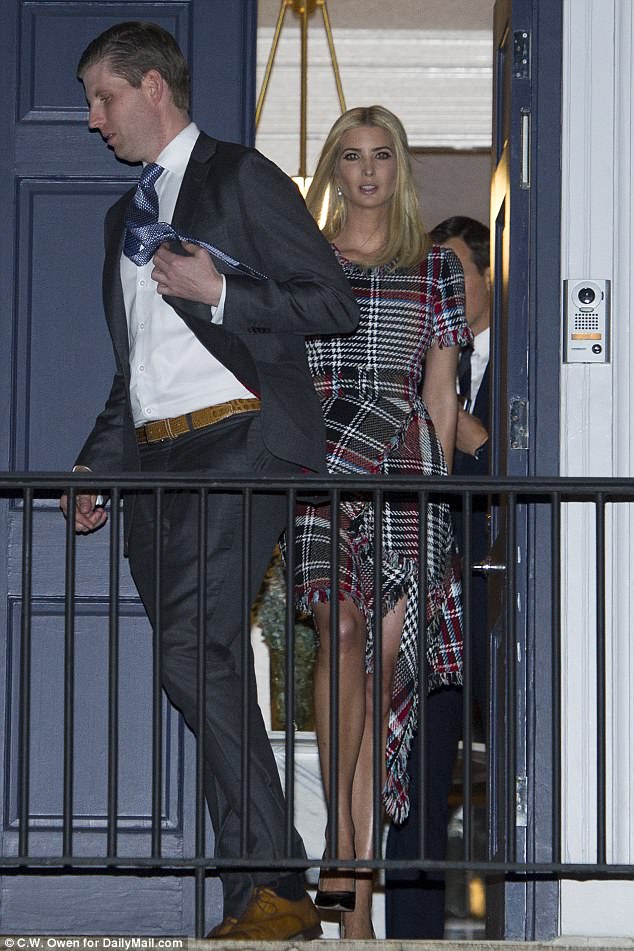 Off she goes: Despite the freezing weather, Ivanka chose to go without a coat, and appeared to have bare legs 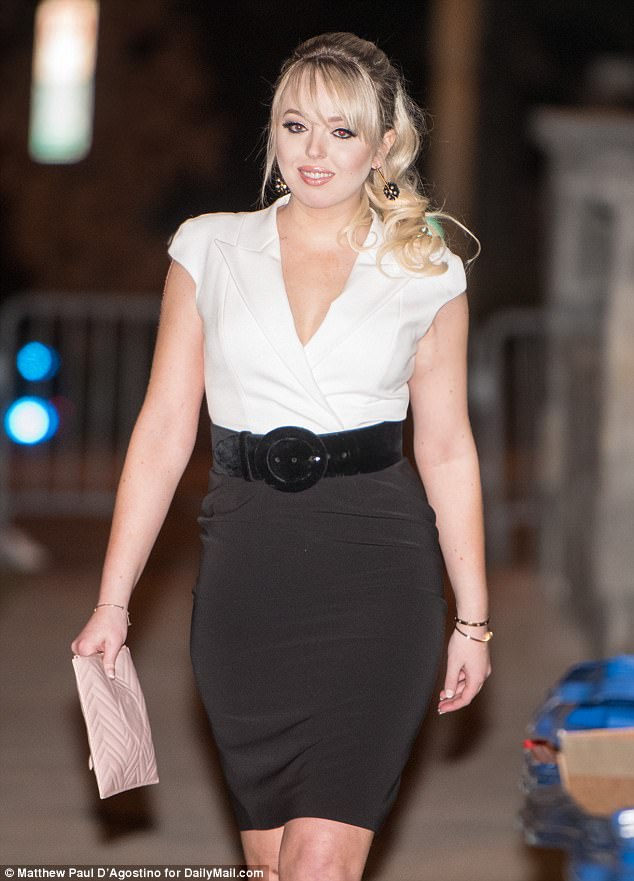 Ready for a night out! Georgetown Law student Tiffany wore a very corporate look, opting for  a white low-cut shirt which she tucked into a black belted skirt; she also carried a Gucci clutch 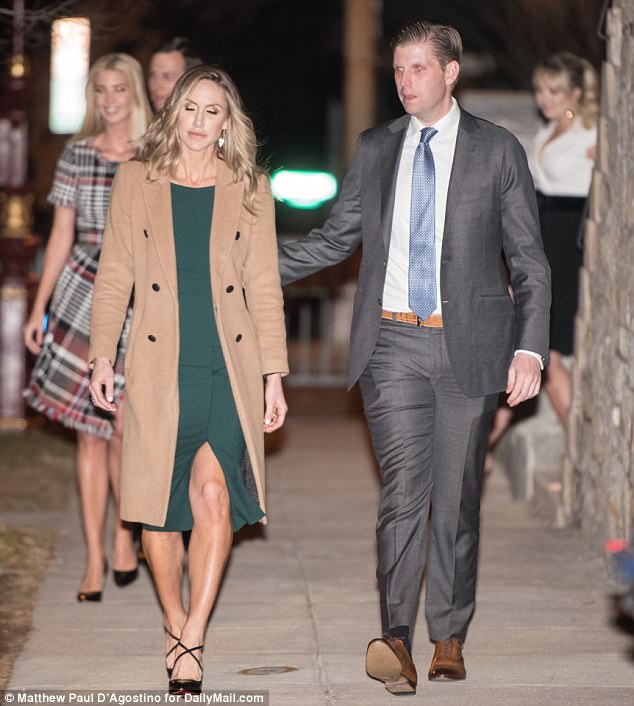 Glamorous: Eric and his wife Lara left their baby boy Luke at home for the evening, with the new mother looking very chic, but a little tired, in her green dress and camel coat 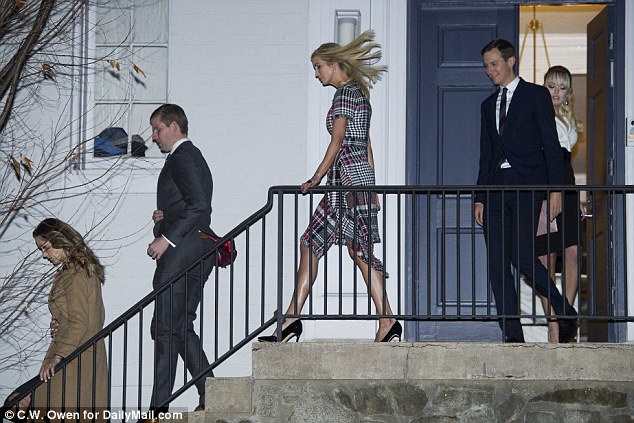 Ready to go! The group left together, making their way down the steps from the main entrance of Jared and Ivanka’s home, and into waiting SUVs

Shortly after the clip was shared, the entire group was seen departing Ivanka’s lavish Kalorama home, with both she and Tiffany daring to brave the bitter D.C. weather without coats, instead showing off their rather glamorous ensembles as they made their way into SUVs that were waiting to whisk them towards the Capitol Building – and Trump’s State of the Union.

Ivanka appeared to have glammed herself up from earlier in the day, when she was seen leaving her house with almost no make-up on, and her hair pulled back from her face; this time around, she was seen wearing a chic $2,690 plaid short-sleeved dress by Oscar de la Renta, pairing the red, black, and white design with some simple black heels.

Her hair was styled in a sleek straight style around her face, and she chose to go for a more glamorous evening-appropriate beauty look, wearing visible highlighter and bronzer on her cheekbones, and adding subtle smokey shadow to her eyes.

Tiffany, meanwhile, chose a simpler, more corporate look in the form of a low-cut white shirt, which she tucked into belted black bodycon-style skirt.

She accessorized with chunky circular earrings and a pale pink quilted $790 Gucci clutch, wearing her long blonde hair in a wavy ponytail, and modeling dark eyeliner.

Excited! After arriving at the White House, Ivanka posted another video, this time showing herself urging people to tune in at 9pm 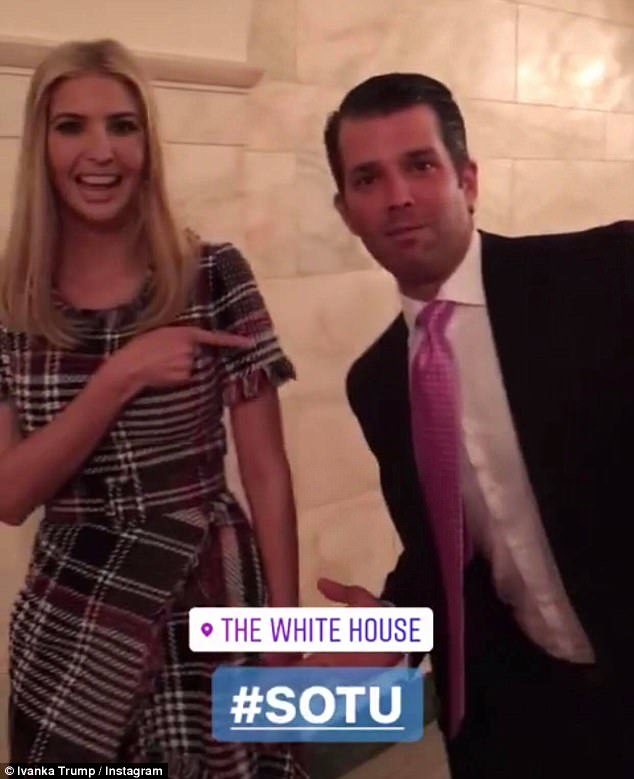 There he is! Despite not attending Ivanka’s dinner, Donald Jr did find time to join his sister’s video at the White House, popping up at the last minute to tell people what time to watch 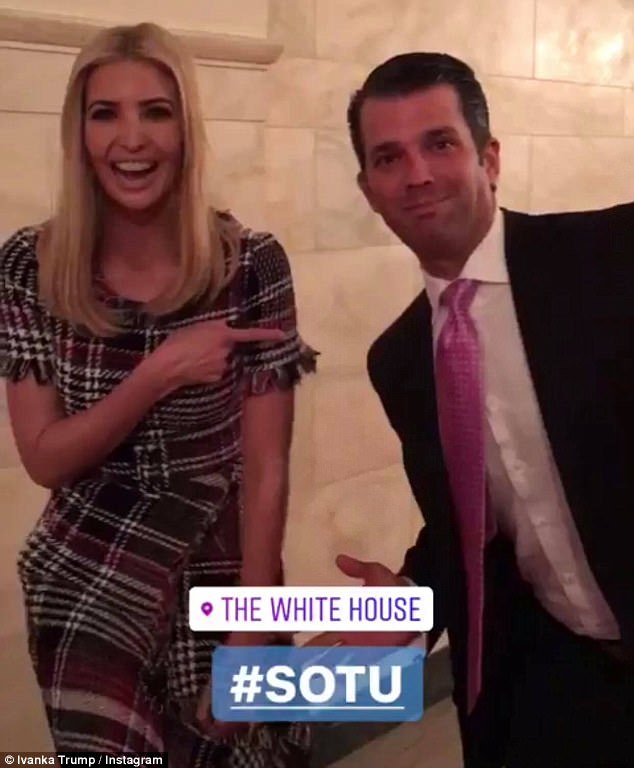 Cheesy: The brother-sister duo seemed more than happy to ham it up for the cameras

New mother Lara, meanwhile, put on a chic show in a forest-green dress, pairing her look with a camel-colored coat – a very sensible move given the sub-zero temperatures.

She also wore a pair of strappy black heels, and left her hair in loose waves around her shoulders.

Both men in the party looked dapper in suits, with Eric wearing a dark grey, while Jared stuck with his trademark navy.

After arriving at the White House, Ivanka then recorded another video for her Instagram Story in which she urged people to tune into the event – with her brother Donald Jr, who did not attend her dinner, popping up in a rather cheesy way to tell people what time to watch.

Earlier in the day, Ivanka put on a much more demure show as she left her home a little before 9 this morning, with her hair pulled back in a discreet low do, wearing minimal – if any – make-up, and opting for a low-key ensemble that was a world away from the bedazzled dress she rocked over the weekend.

She kept out the cold D.C. weather in a long, black coat and matching knee-high boots, finishing off her minimalist look with classic pearl earrings. 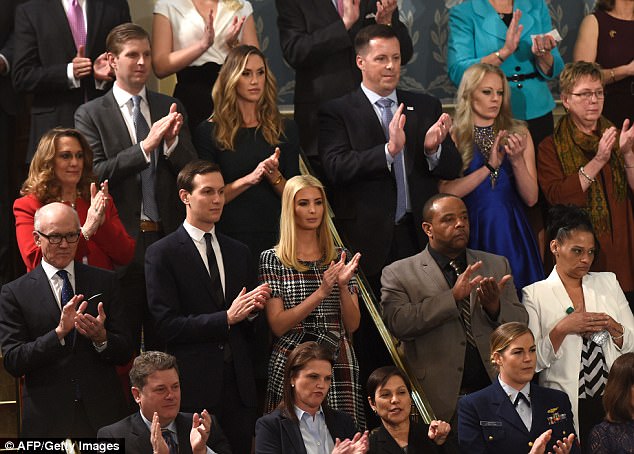 Supportive: The group then sat together upon arrival at the Capitol, with Ivanka and Jared taking the front seats, while Lara and Eric sat behind them, following by Tiffany and Don Jr 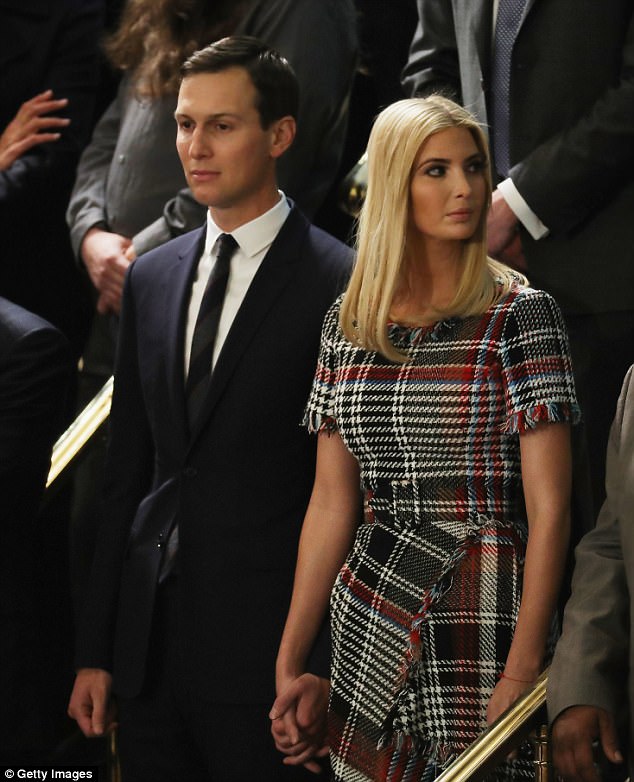 Showing affection: Ivanka and Jared clasped hands as they stood waiting for President Trump to make his entrance 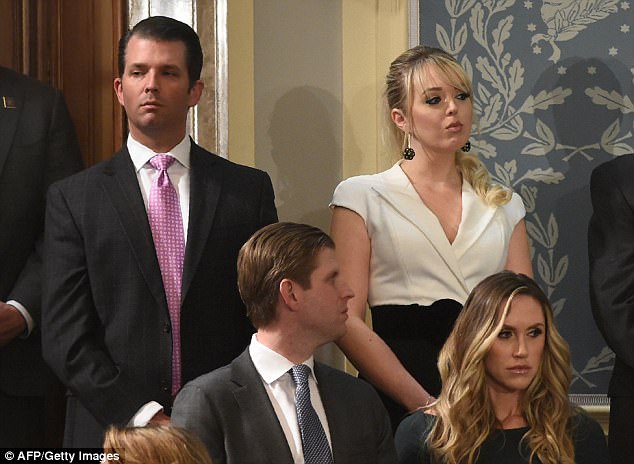 Thoughtful: The family all looked much more somber after entering the Capitol than they had during their joking social media videos 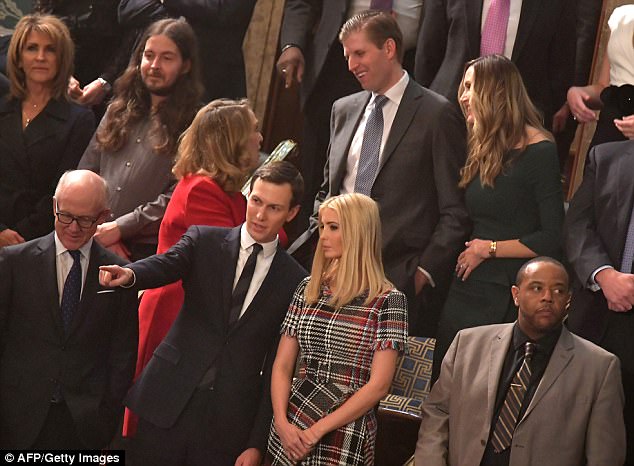 Catching up: Eric and Lara happily chatted with fellow attendees, while Jared and Ivanka were seen sharing a few quiet words together

Ivanka, who wore red under her coat, went for a nude lip and shunned heavy eye make-up in favor of a fresh-faced appearance, which also included bare nails.

She smiled as she walked from her home to the parked Secret Service vehicle waiting for her at the start of her work day.

Her husband and fellow White House adviser Jared Kushner, 37, was also pictured leaving the house this morning a little after 7, sticking to his classics in a black suit and white shirt.

Jared flashed a smile as he stepped out to hop into his own car on his way to work.

The White House is currently gearing up for President Donald Trump’s State Of The Union address, which he is scheduled to deliver tonight.

Yesterday evening, Ivanka took to Instagram to share a throwback photo of her glamorous weekend outing with Jared, in stark contrast with this morning’s simple look.

She can be seen in the photo, which was taken on Saturday, donning an elegant black dress with a shawl-like attachment, with her hair swept up in an elegant up-do.

Ivanka completed her outfit with a dark smoky eye and a bright red lip, giving the ensemble a distinct formal touch.

Jared, meanwhile, opted for a simple black tuxedo and bow tie. His wife captioned the photo ‘With my love’ and indicated it was taken by their four-year-old son Joseph. 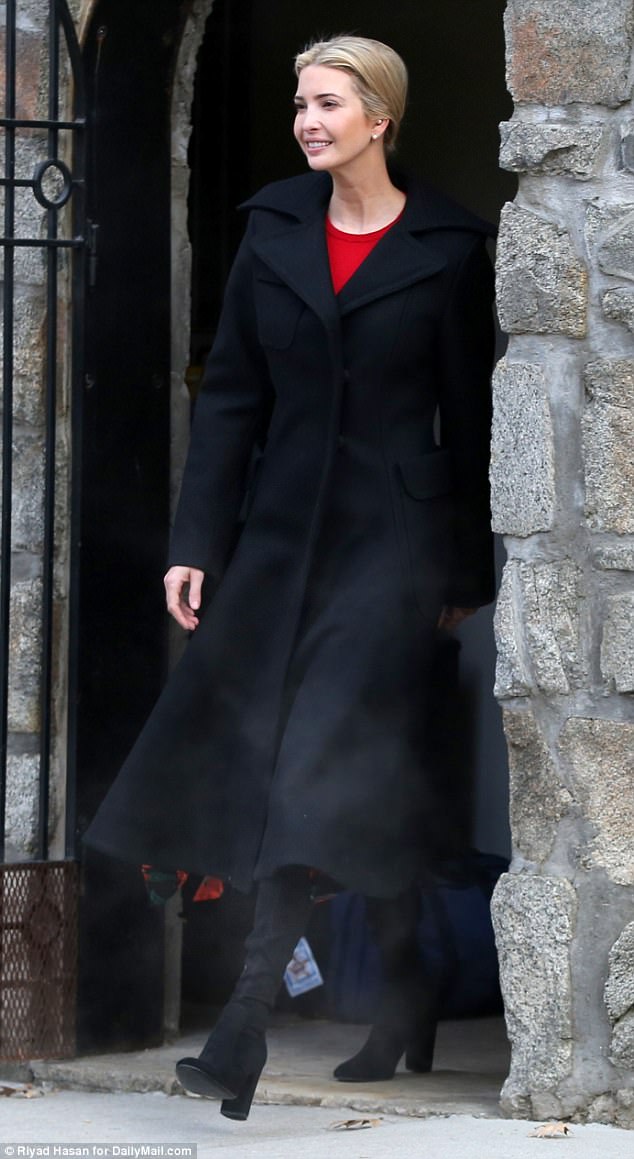 Bare-faced: Earlier in the day on Tuesday, Ivanka cut a demure silhouette as she headed out to work with barely-there make-up and a simple outfit, with only minimal accessories

Greeting the day: She was seen leaving her family home a little before 9 this morning, with her hair pulled back in a discreet low do 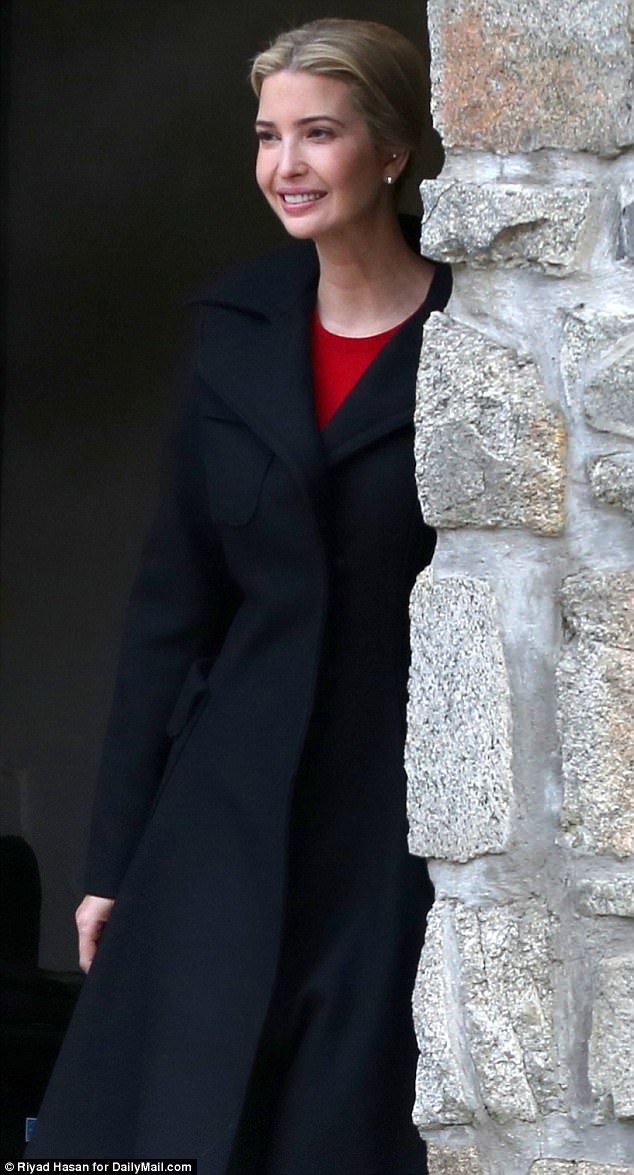 Warm: Ivanka fended off the cold D.C. weather in a long, black coat and matching boots 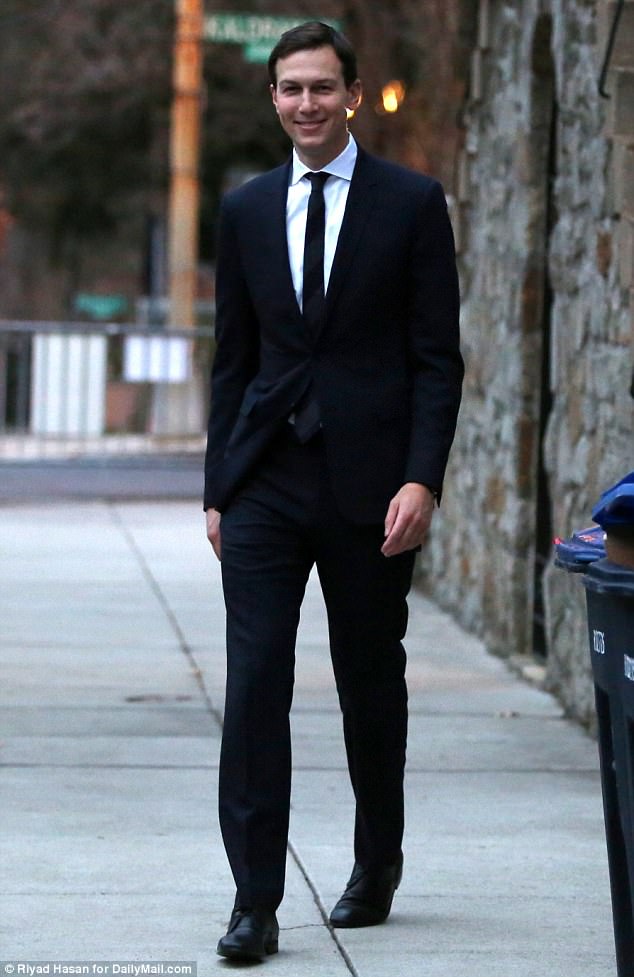 Duo: Her husband and fellow White House adviser Jared Kushner, 37, was also pictured leaving the house this morning a little after 7, sticking to his classics in a black suit and white shirt

Tiffany Trump, 24, was also dressed to impress on Saturday night in a formal white and gold floor-length dress. The Georgetown Law’s students gown featured cut-out shoulder sleeves and cut-out in the midriff.

Her hair was also in an upsweep with curls framing her face. She posted a video of herself and a friend walking down the hallway of the Trump International Hotel in their evening wear.

Earlier last week, Ivanka remained in the nation’s capital while her husband and fellow White House adviser, Jared, 37, accompanied her father to the World Economic Forum in Davos, Switzerland.

Instead, she headed to Greenville, South Carolina, with Republican Senator Tim Scott to talk about the tax reform passed by the Trump administration last month, and how it affects families.

Ivanka’s visit to South Carolina came as Jared was heading back to the US along with the rest of the US delegation in Davos.

Jared and White House communications director Hope Hicks were seen together on the tarmac on Friday, getting ready to leave Switzerland at the close after Trump’s address.

Trump’s son-in-law has appeared in high spirits throughout the visit, and was seen smiling widely among the crowd, including before a meeting between President Trump and British Prime Minister Theresa May. 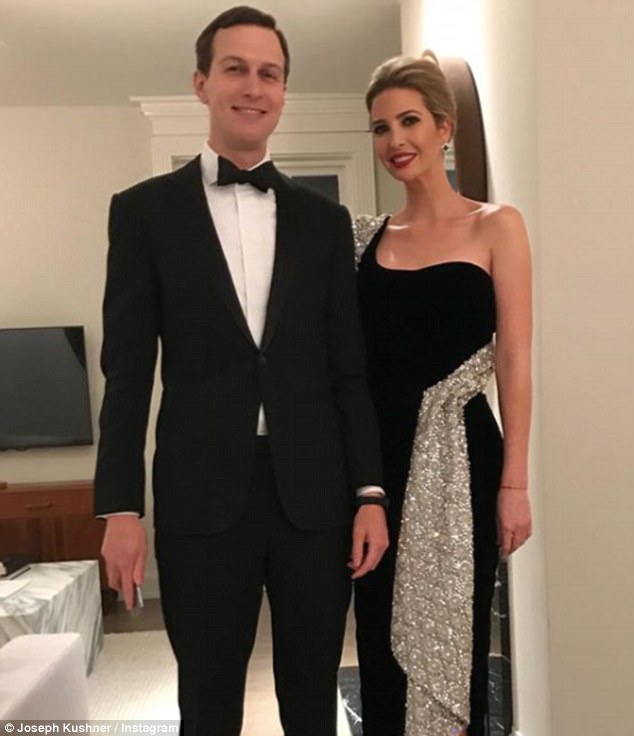 Throwback: On Monday evening, Ivanka took to Instagram to share a photo of her glamorous weekend outing with Jared, in stark contrast with this morning’s simple look 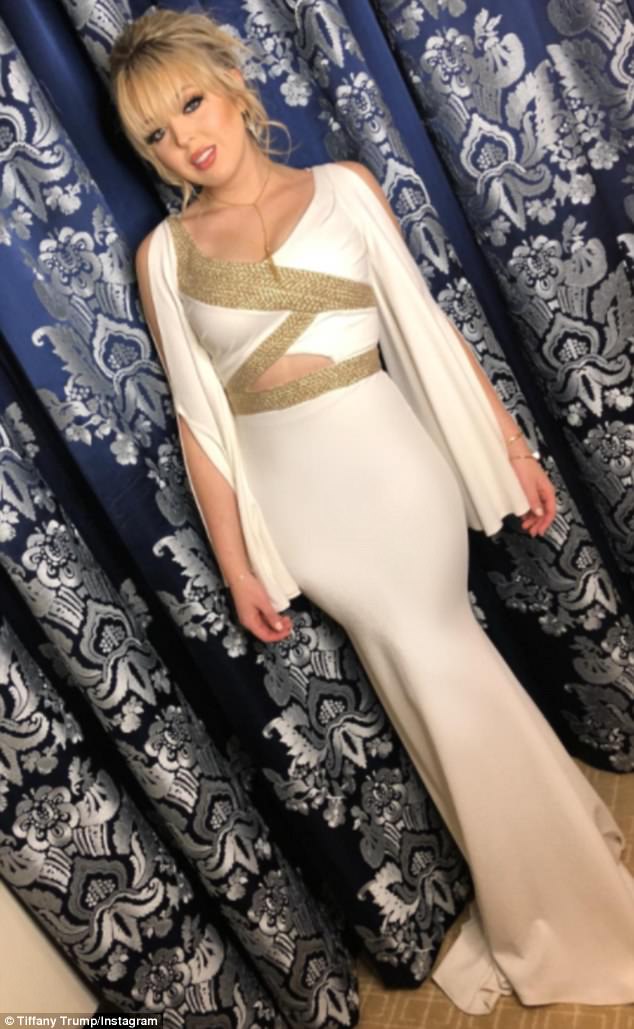 Sister: Tiffany  was also dressed to impress in a formal white and gold floor-length dress 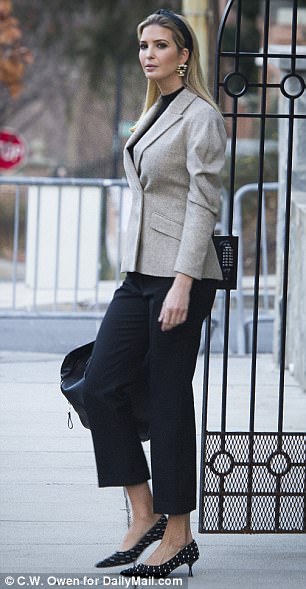 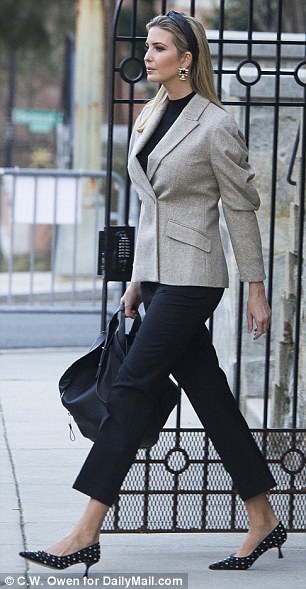 Duties: While her husband was in Davos last week, Ivanka remained at home in Washington, DC and was seen leaving her home in a blazer and black pants on Friday morning (left and right) 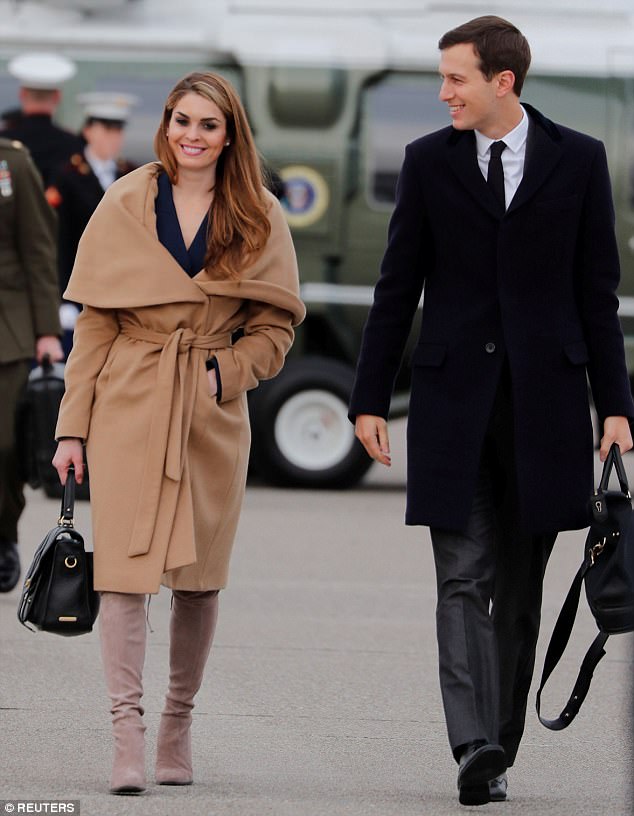 Meanwhile Tiffany’s last big public outing was at the Playboy Mansion’s New Year’s Eve party, held at the Culver Hotel in Los Angeles, where fellow party-goer Candace Jordan snapped some pics of the A-list attendee, showing the blonde smiling happily while posing with other guests.

Tiffany was the guest of honor at the Playboy event, which was hosted by Cooper Hefner and his fiancee, former Harry Potter star Scarlett Byrne.

It marked the first New Year’s Eve party since the death of the magazine’s founder and Cooper’s dad, Hugh Hefner, who back in 1990 had been hoping to get Tiffany’s mom Marla Maples as one of his bare-all bunnies.

Tiffany managed to steal the show in the room packed full of bodacious beauties thanks to her high-hemmed and low-cut sequin mini dress, which fit her like a second skin and showed off her enviable figure.

Following her stay in Los Angeles, Tiffany then embarked on a wild weekend in Las Vegas, where she celebrated the birthday of her close friend Andrew Warren, and also served as a flower girl at the surprise wedding of two of her close friends, NYC Prep reality star Peter Carey Peterson and Hamptons royalty Quentin Esme Brown.