It appears Ivanka Trump is suddenly feeling a bit camera-shy.

The first daughter, 36, was seen on Friday morning heading to work straight from her garage in an SUV — in keeping with her discreet behavior of the past few weeks.

Since taking on the role of White House adviser, Ivanka has often been seen making the walk from her house in Kalorama, Washington, D.C. to her vehicle, showing off her outfit in the process.

Camera-shy? Ivanka Trump, 36, was seen on Friday morning heading to work straight from her garage in an SUV — in keeping with her discreet behavior of the past few weeks 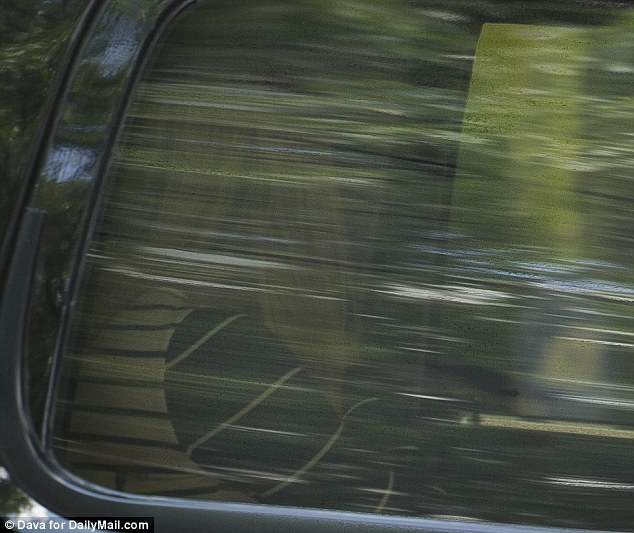 Looking away: The first daughter, who appeared to be on a call, wouldn’t show her face and kept her back to the lens, dressed in a striped sweater with her hair in a straight blowout 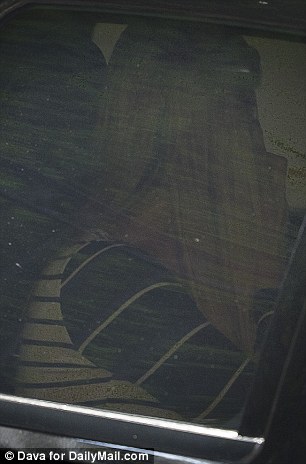 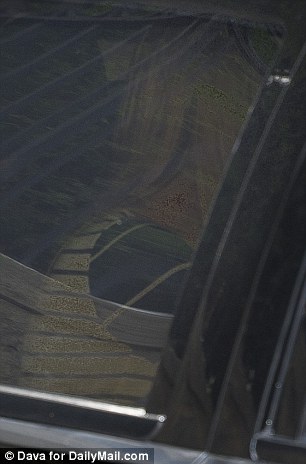 Changes: Since taking on the role of White House adviser, Ivanka has often been seen making the walk from her house to her vehicle, but she appears to have grown out of the habit

However, Ivanka seems to have grown out of the habit throughout the month of August. The last time she was seen publicly on her morning commute was on August 2.

Ivanka was on her way to give a talk to the Newseum in D.C. She smiled and waved at the camera as she went to board her Secret Service SUV.

On Friday, however, the first daughter remained inside her tinted-window vehicle, turning her back to the camera as it pulled away.

Ivanka, who appeared to be on a call, wouldn’t show her face and kept her back to the lens, dressed in a striped sweater with her blonde hair in a straight blowout.

She did the same thing on several other occasions, each time turning her head the other way so her face wouldn’t appear on camera.

On social media, too, the first daughter appears to have become significantly more guarded. 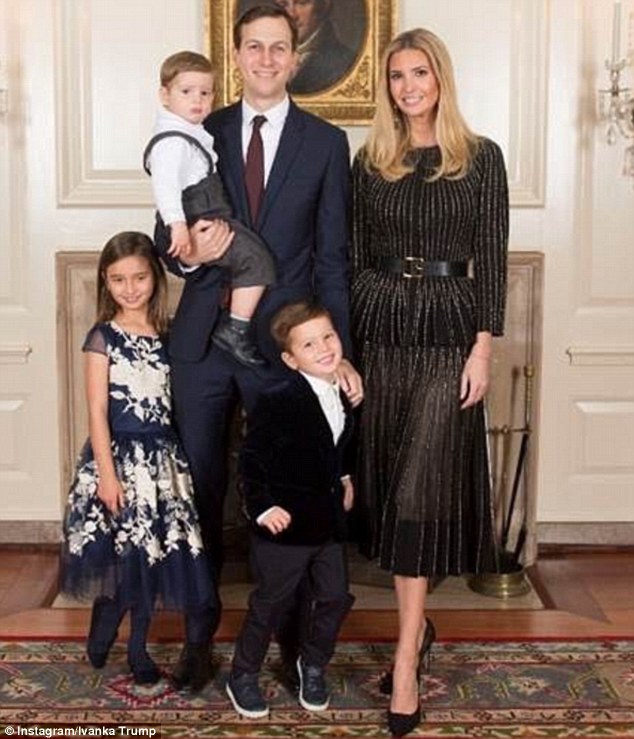 Past: The last time Ivanka shared a family photo dates back to June 17, when she posted this image to wish Jared a happy Father’s Day 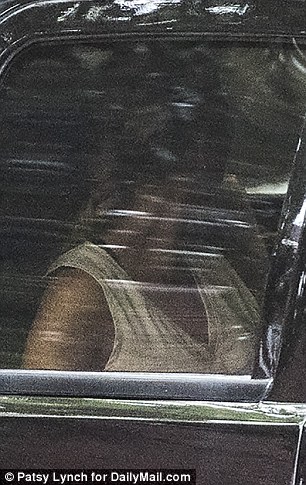 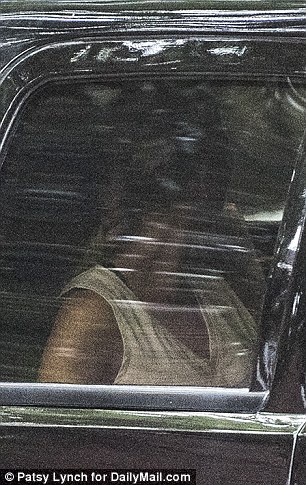 Used to it: Ivanka avoided looking at the camera on several other occasions in August. She is pictured on August 30 returning home after work 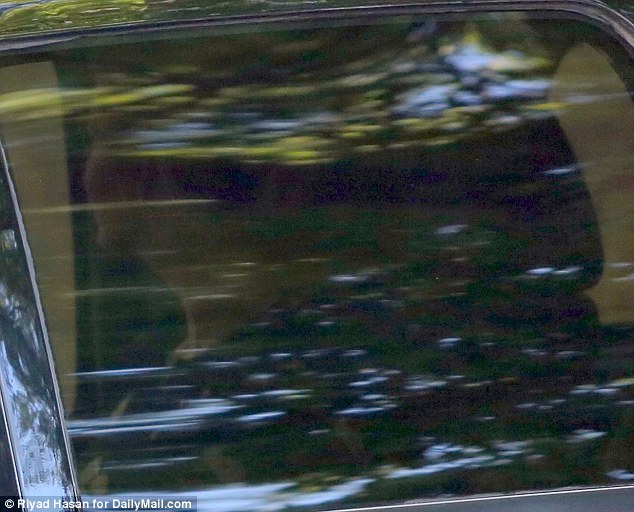 Repeat: On August 30 in the morning, Ivanka once again averted her gaze as she left home 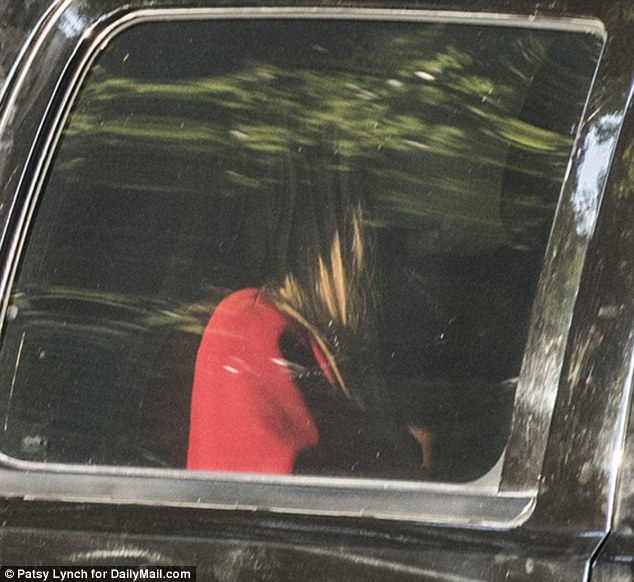 Incognito: Ivanka did the same thing on August 28 as she returned to her D.C. house

Ivanka used to regularly share snippets of her personal life, including photos of herself with her husband Jared Kushner, 37, and their children Arabella, seven, Joseph, four, and Theodore, two.

The mother of three would post photos of religious holidays, birthdays, and various activities involving her family.

However, the last personal post she shared on Instagram dates back to June 17, when she published a picture of herself, Jared, and their three children to wish her husband a happy Father’s Day.

When her daughter Arabella turned seven on July 17, Ivanka, who has frequently used social media to acknowledge her children’s birthdays, didn’t mark the occasion in an Instagram post.

The most recent photo she has shared features Jared holding up a Fifa soccer jersey with his last name on it. Ivanka, who doesn’t appear in the snap, expressed her excitement in anticipation of the 2026 World Cup, which will be hosted by the US, Canada, and Mexico.

She posted the picture after FIFA president Gianni Infantino visited her father. 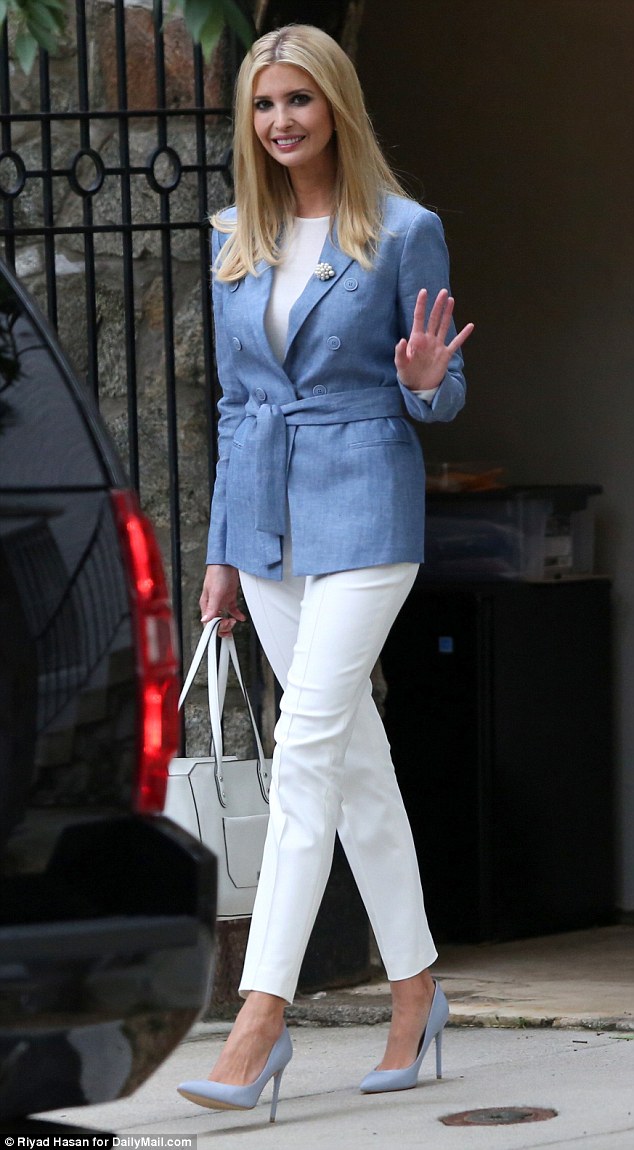 Previously: Ivanka last showed herself on her morning commute on August 2, when she was heading out to give a talk at the Newseum in D.C. 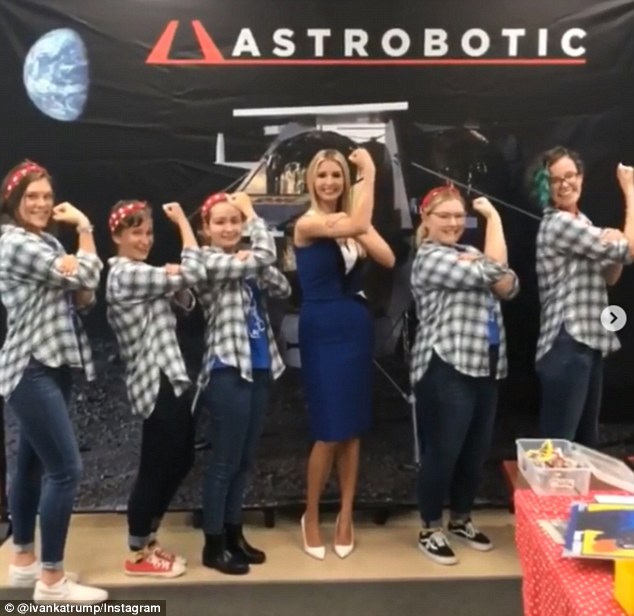 Publications: On August 14, Ivanka shared images of herself visiting a female robotics team in Pittsburgh, Pennsylvania 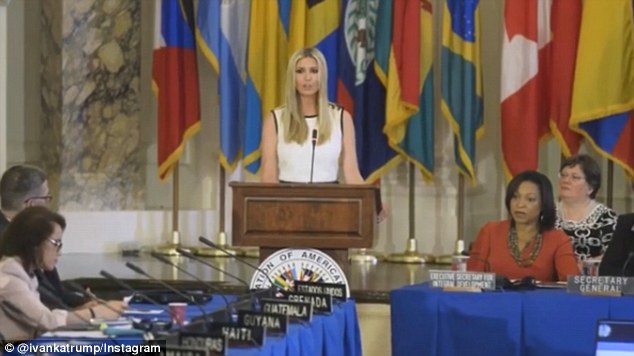 Break: She didn’t post again until two weeks later, when she shared images of herself during a talk hosted by the Organization of American States 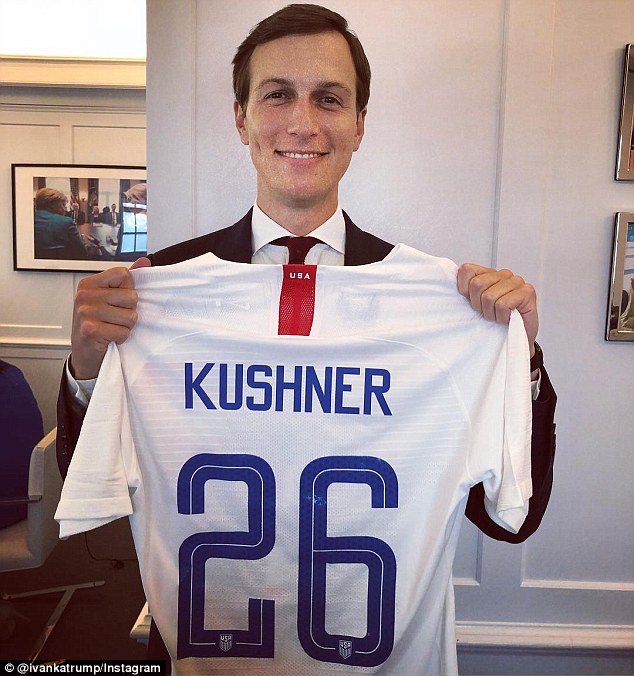 Sports: Most recently, Ivanka shared this photo of Jared holding up a Fifa soccer jersey with his last name on it She posted the picture after FIFA president Gianni Infantino visited her father

Ivanka also refrained from posting on her Instagram page for two weeks in August, likely while the family was enjoying a vacation.

On August 14, she shared images of herself visiting a female robotics team in Pittsburgh, Pennsylvania. 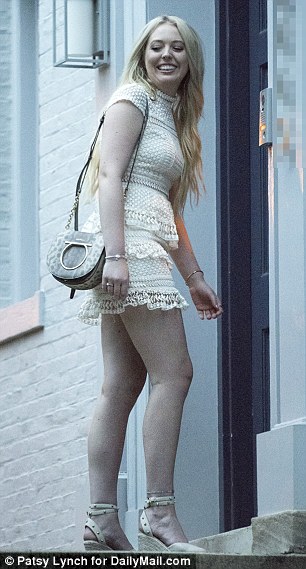 She didn’t post again until two weeks later, when she shared images of herself during a talk hosted by the Organization of American States.

Senator Lindsey Graham did share a photo of one of Ivanka’s children on Wednesday, after the first daughter took eldest child Arabella to a meeting with her.

‘Great meeting with @IvankaTrump and her daughter Arabella,’ he tweeted next to a photo of the mother and daughter.

‘I appreciate all Ivanka is doing to improve the plight of women in the developing world.’

Despite her relatively-low-key social media presence, and her sudden camera-shyness on her morning and evening commutes, Ivanka has made some rather under-the-radar appearances at official events, in addition to those she chose to publicize online.

On August 27, she was pictured at an event honoring Evangelical leadership, which took place in the State Dining Room of the White House. Ivanka was snapped just once by official White House photographers, looking lovely in a sheer purple dress with floral embellishments, while chatting to her fellow guests. 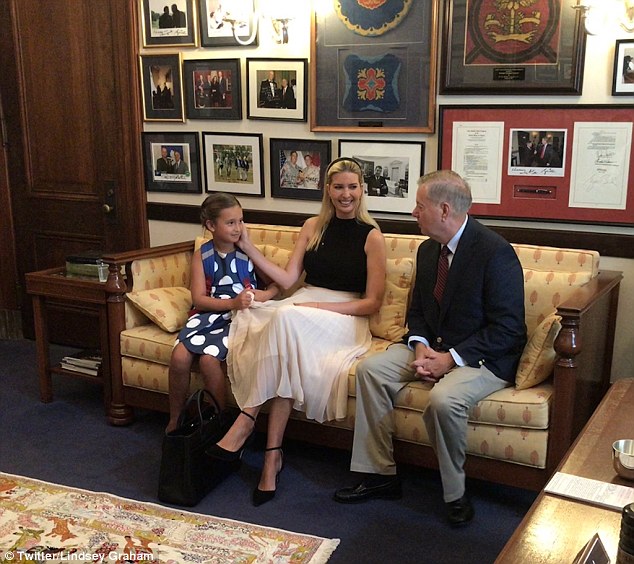 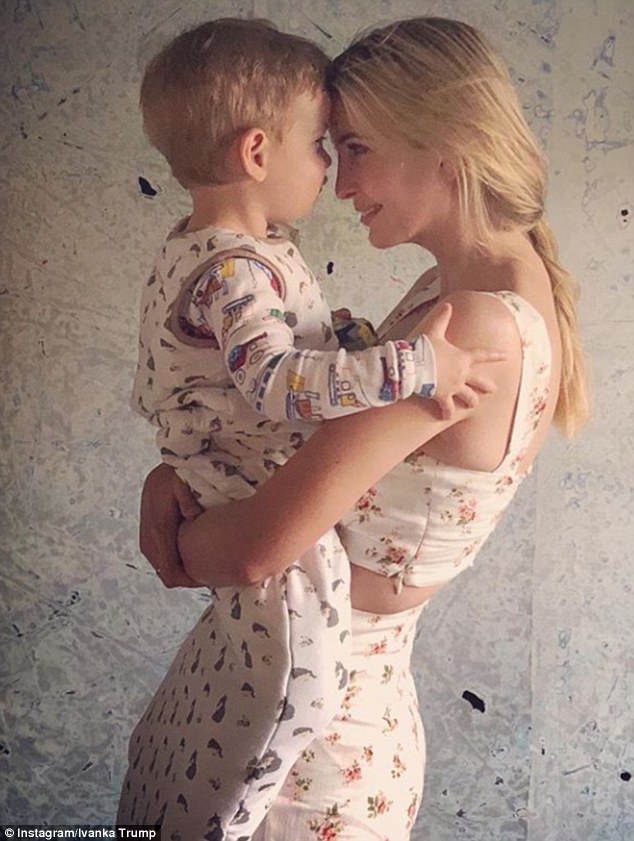 Backlash: Ivanka caught flack for posting this photo of herself cuddling with her two-year-old son on May 27, amid public outcry over family separations at the US-Mexico border

She was also snapped on August 7, this time at a dinner with her father and a group of business leaders at the family’s golf club in Bedminster, New Jersey. Once again, Ivanka put on a glamorous show for the occasion, wearing a full face of makeup, and slicking her hair back into a chic updo.

It may be that Ivanka, who received a visit from her younger sister Tiffany Trump, 24, on Thursday, has decided to share fewer snaps of her personal life on social media after receiving flack for her ‘tone-deaf’ publications.

It was her post from May 27, when family separations at the US-Mexico border were making headlines and generating outcry across the country, that fueled backlash against the mother of three.

Just over two months ago, Ivanka shared a photo cuddling with her two-year-old son, with the caption, ‘My [heart emoji].’

As she shared the post, mothers were being separated from their children and placed in cages at immigration facilities. Social media users were quick to point out the insensitivity of the post.

‘Personally I found this to be offensive when #WhereAreTheCHILDREN is on everyone’s mind!’ a Twitter user with the handle @kellyagb wrote, on May 27.

Ivanka stayed silent on the matter, until June 21, which was after President Donald Trump signed an executive order stopping the policy his administration put into effect. 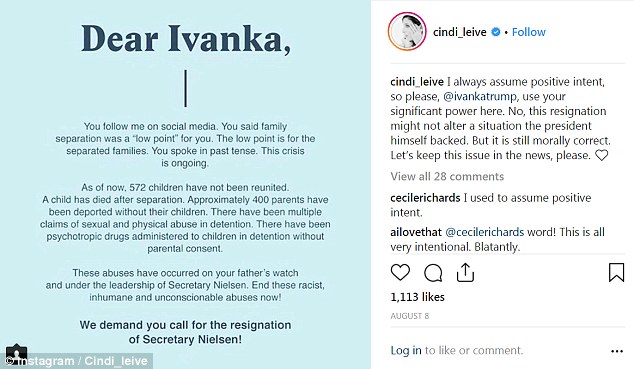 Call to action: Former editor-in-chief of Glamour magazine Cindi Leive joined a slew of people who tagged Ivanka on Instagram while begging for her to step in

She tweeted on June 21: ‘Now that an EO has been signed ending family separation at the border, it is time to focus on swiftly and safely reuniting the families that have been separated.’

But the calls for action to one of the president’s most trusted advisers didn’t stop there.

Former editor-in-chief of Glamour magazine Cindi Leive joined  a slew of people who tagged Ivanka on Instagram while sharing a message begging for her to step in and call for the resignation of US Secretary of Homeland Security Kirstjen Nielsen.

‘I always assume positive intent, so please, @IvankaTrump, use your significant power here,’ Leive wrote with the post on August 8.

‘No, this resignation might not alter a situation the president himself backed. But it is still morally correct. Let’s keep this issue in the news, please.’

As of Monday, 497 children of the 2,600 who were separated from their parents or guardians remained in government custody at the border, 22 of whom are aged four or younger, according to the Washington Post.

The Post reports 2,157 children have been reunited or released.