Ivanka Trump looks in high spirits on Air Force One

Ivanka Trump jetted back to Washington DC last night onboard Air Force One as her father continues to deal with the growing Charlottesville crisis.

Ivanka carried her son Theodore up the steps to the presidential aircraft while holding hand with her eldest daughter Arabella.

President Donald Trump arrived a short time later with his wife Melania and their son Barron.

Ivanka Trump, pictured approaching Air Force One in Morristown, New Jersey with her children Arabella, left, and Theodore, right, attempted to mitigate some of the damage caused by her father over his handling of Charlottesville 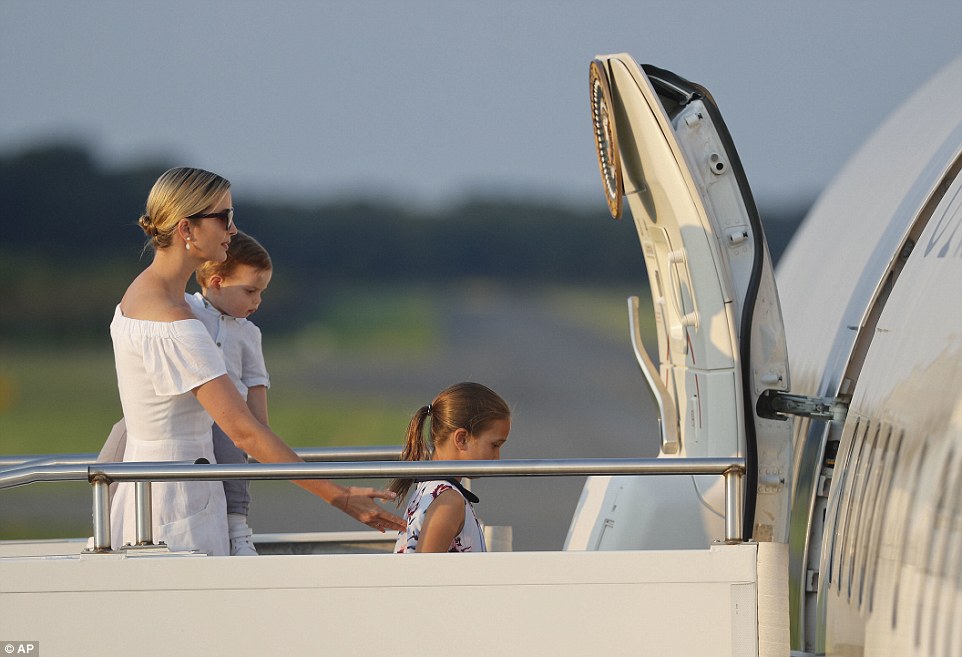 While Trump continued to attack the Fake News media Ivanka tweeted a message about peaceful protests against bigotry, racism and antisemitism being ‘beautiful’ following an attack on the president by her Rabbi Haskel Lookstein 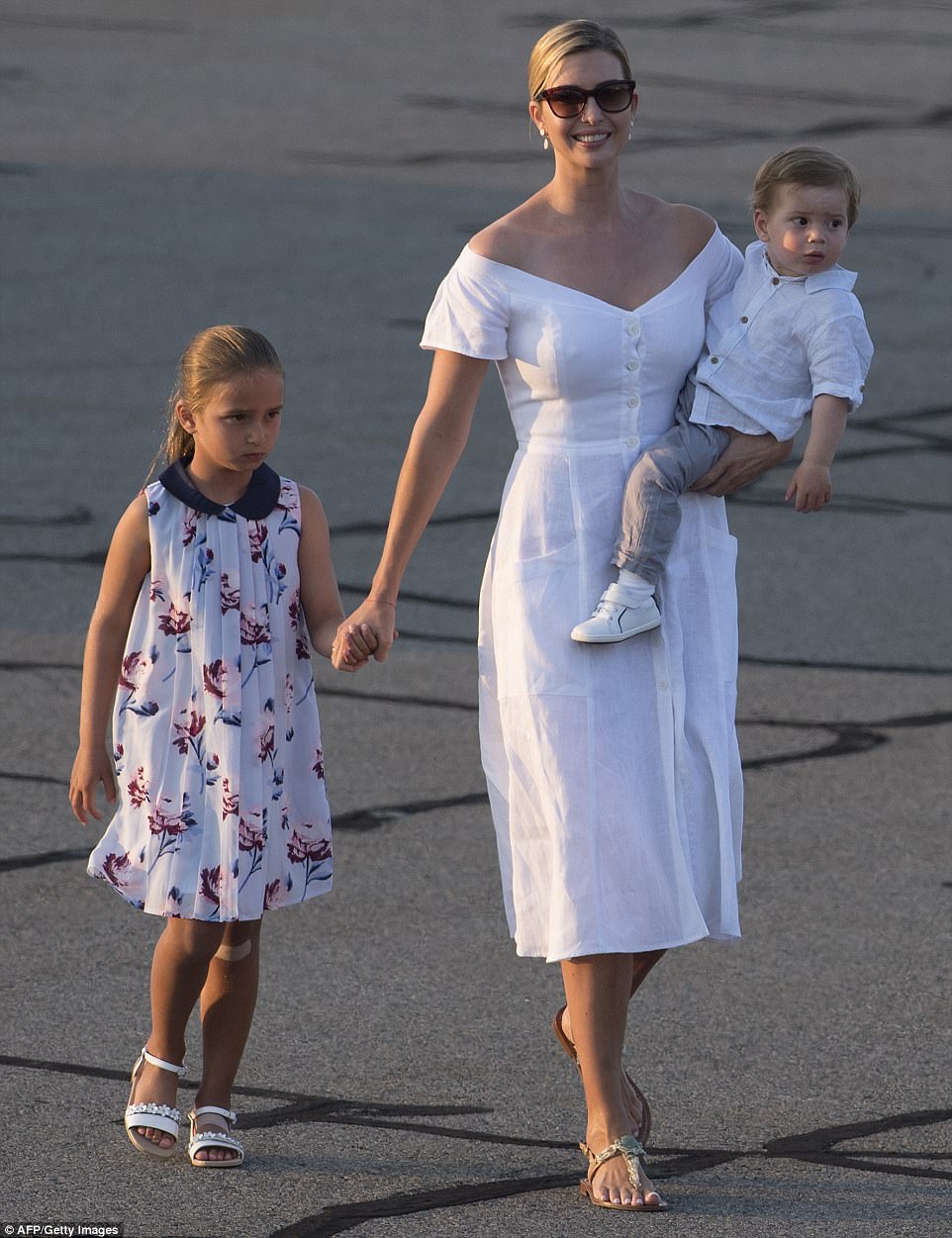 Rabbi Lookstein, who rarely comments about the president, attacked Trump for blaming ‘both sides’ following Charlottesville

On Saturday night, Ivanka tweeted: ‘It was beautiful to see thousands of people across the U.S.A come together today to peacefully denounce bigotry, racism & anti-semitism.’

She continued: ‘We must continue to come together, united as Americans!’

Ivanka is married to Jared Kushner, who is also a senior member of Trump’s inner circle.

She had previously condemned the far right protesters in Charlottesville, in stark contrast to the reaction of her father.

She tweeted: ‘There should be no place in society for racism, white supremacy and neo-nazis. We must all come together as Americans — and be one country UNITED. #Charlottesville.’

Trump has faced condemnation over the length of time it took him to condemn neo-Nazi protesters in Charlottesville – even by Ivanka’s rabbi, who publicly denounced the president for blaming ‘both sides’.

Rabbi Haskel Lookstein of Congregation Kehilath Jeshurun, and other rabbis from the prominent modern Orthodox synagogue in Manhattan, said in a Facebook message that they were ‘deeply troubled by the moral equivalency and equivocation’ of Trump’s reaction. 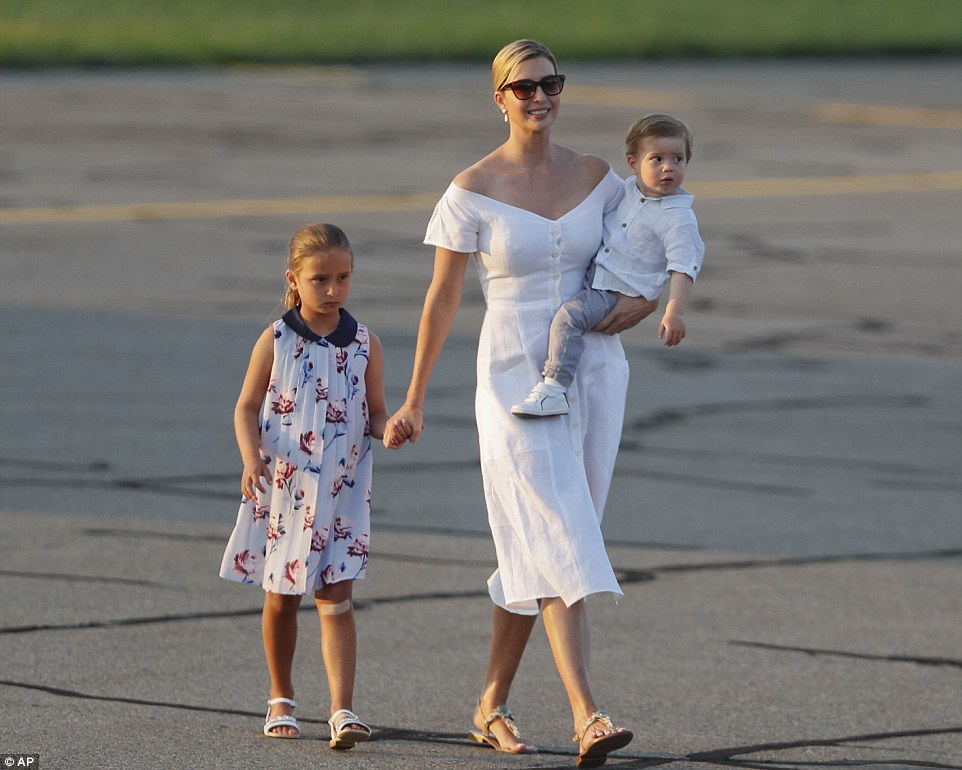 Ivanka  and her children flew along with the President from Morristown in New Jersey to Andrews Air Force Base, Maryland 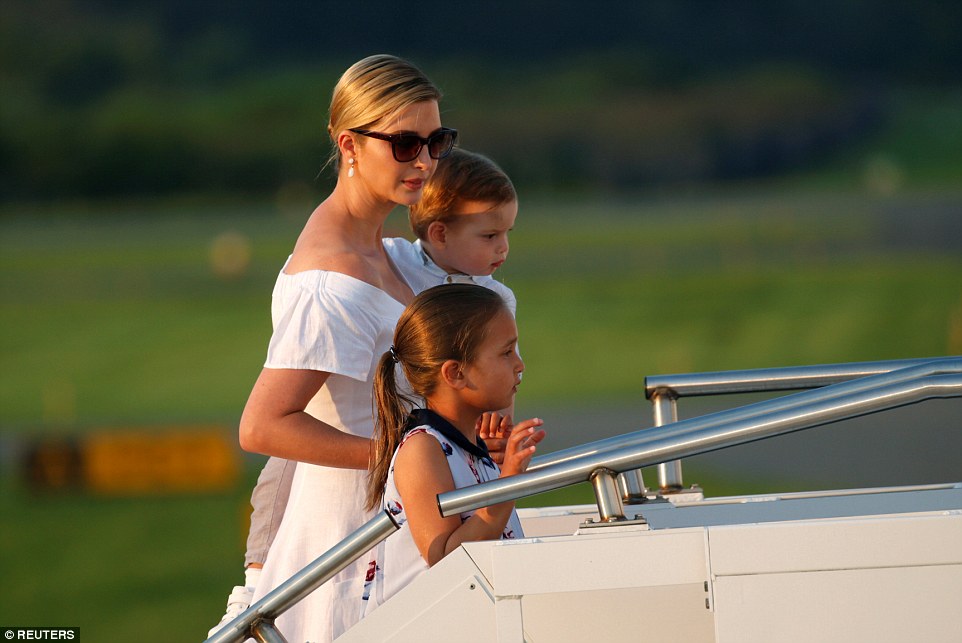 While on vacation, Trump sacked his adviser Steve Bannon who was seen as a threat by Ivanka and husband Kushner 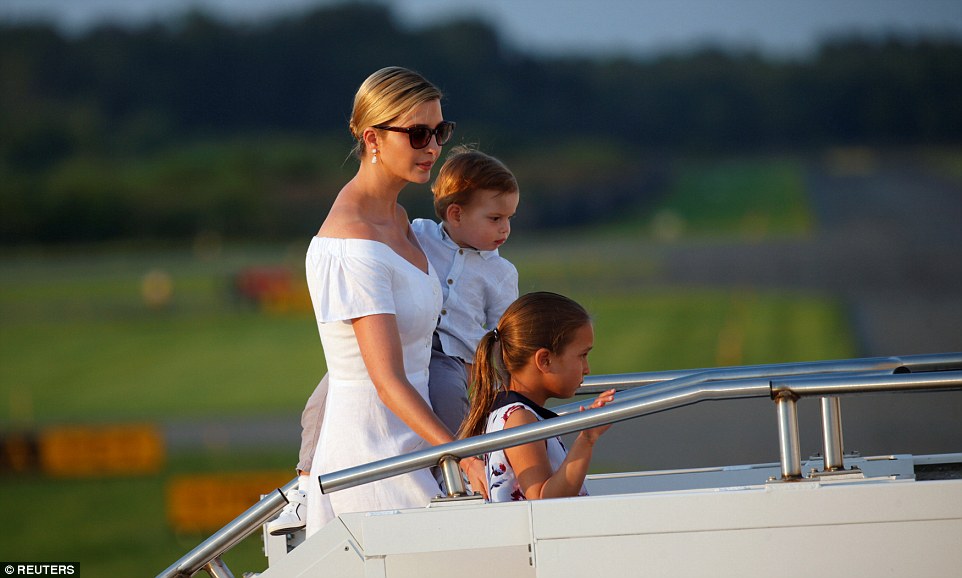 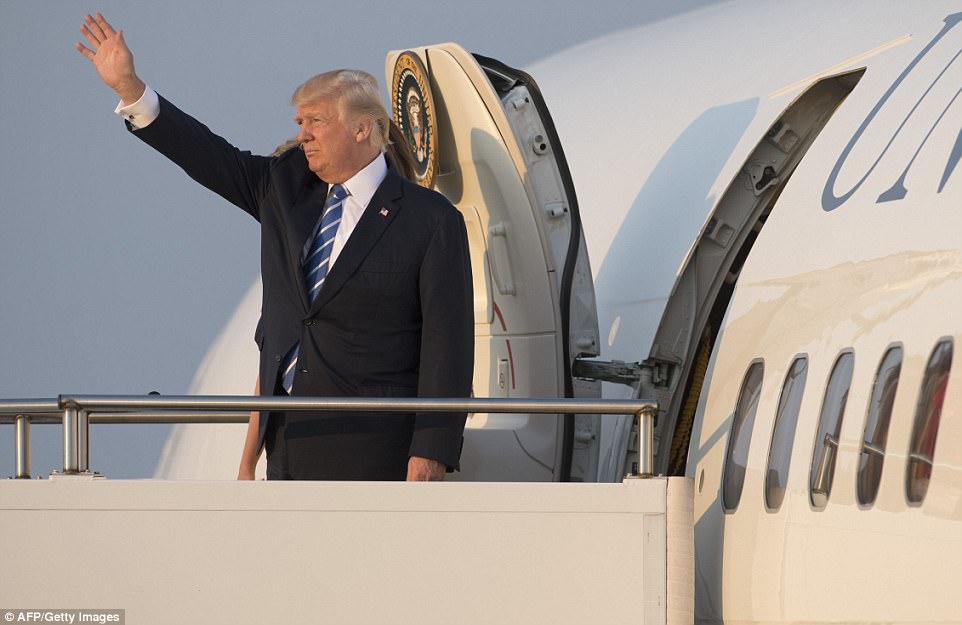 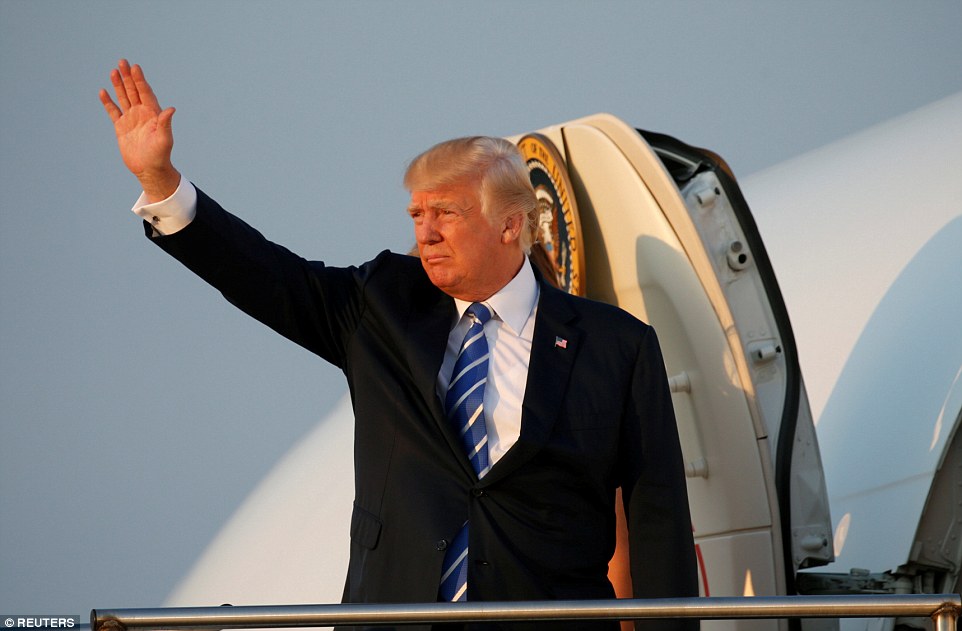 According to Gallup, Trump’s approval rating has hit 36 per cent with 58 per cent thinking he is a bad Commander in Chief

Lookstein oversaw Ivanka Trump’s conversion to Judaism. He has only rarely commented on the president.

Separately, the Republican Jewish Coalition, which has supported Trump through earlier controversies, urged him ‘to provide greater moral clarity in rejecting racism, bigotry and anti-Semitism.’ Among the coalition’s board members is Las Vegas casino magnate and GOP donor Sheldon Adelson, who eventually supported Trump.

The Republican Jewish Coalition said: ‘The Nazis, the KKK, and white supremacists are dangerous anti-Semites.There are no good Nazis and no good members of the Klan.’

With the midterm elections approaching, some figures in the White House fear Trump’s plummeting poll ratings could lose them control of Congress.

GOP senators couldn’t cobble together the 50 votes needed to pass a health care overhaul and that same math could continue to be a problem in the fall, as Republicans work on reforming the tax code, which is realistically the party’s last opportunity to pass major legislation in 2017.

Tom Davis, a Republican state senator representing a coastal South Carolina district, said that when Trump can move beyond the crisis of the moment, he articulates policies that could help the country’s economic situation. But Davis said Trump is also part of the reason not much progress has been made.

He said: ‘To his discredit, he’s been maddeningly inconsistent in advancing those policies, which is part of the reason so little has been accomplished in our nation’s capital these past six months.’

Mike Murphy, a veteran Republican strategist who most recently tried to help Jeb Bush win the 2016 GOP presidential primary, said the early optimism some Republicans felt about their ability to leverage Trump’s presidency has all but evaporated in the days following the Charlottesville protests.

He added: ‘Most party regulars have gone from an initial feeling of guarded optimism that Trump would be able to stumble along while Mitch (McConnell) and (Paul) Ryan do the big lifting and pass our Republican agenda to a current feeling of deep frustration and despair.’