Ivanka Trump looked somber as she watched her father, President Donald Trump, unveil his plan for peace in the Middle East on Tuesday amid his impeachment trial.

The first daughter, who wore a variety of colorful designer outfits in Davos, Switzerland, last week, donned a demure all-black outfit when she arrived in the East Room of the White House.

Ivanka, 38, had a serious look on her face as she spoke with House Minority Whip Steve Scalise ahead of the announcement.

Support system: Ivanka Trump watched her father, President Donald Trump, unveil his plan for peace in the Middle East in the East Room of the White House on Tuesday 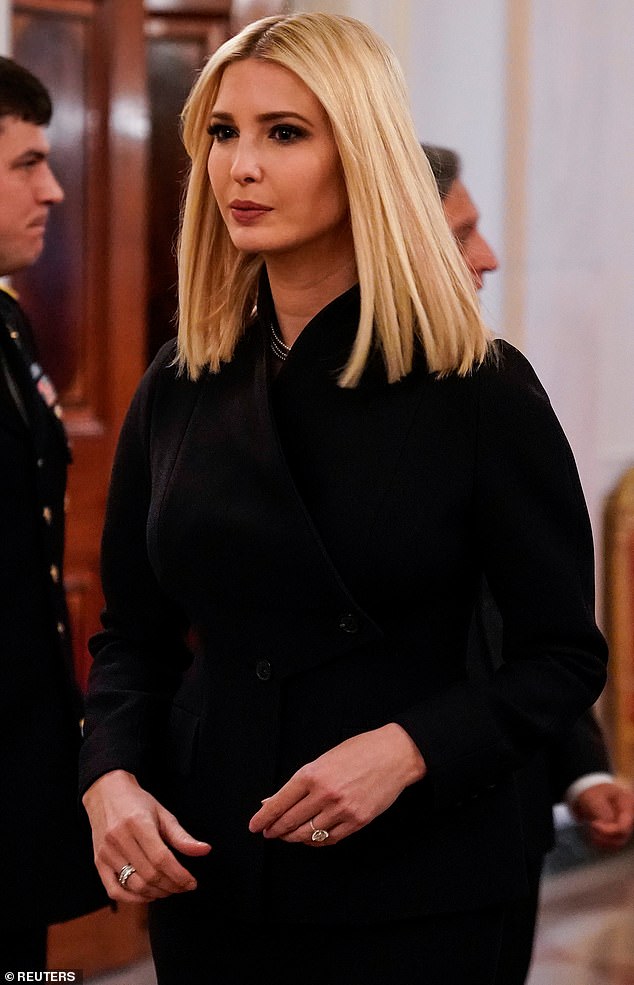 Outfit of the day: Ivanka donned a black suit jacket and a matching skirt for the occasion 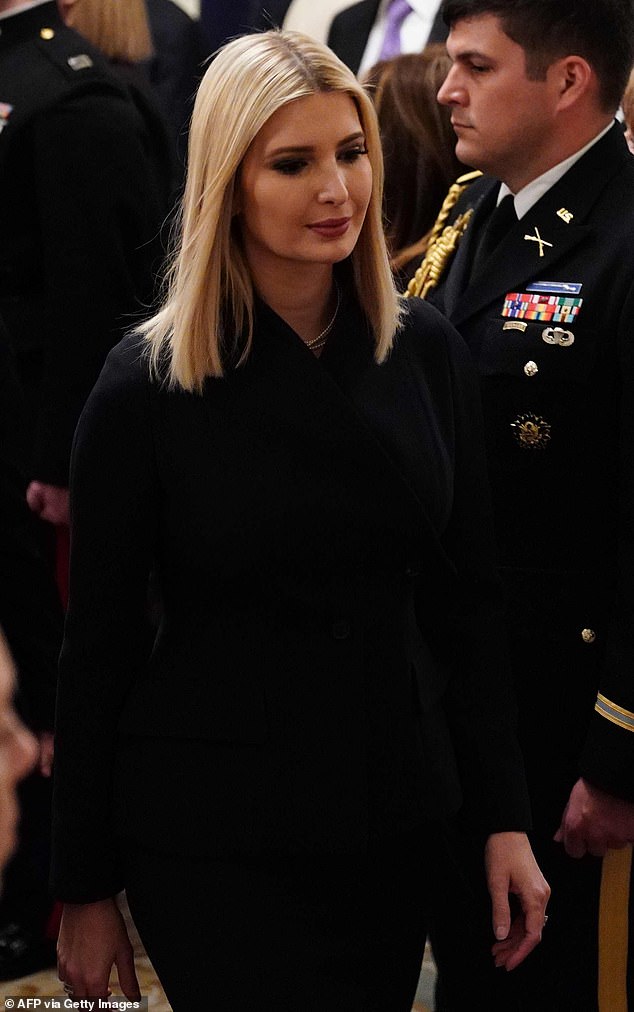 Worried? The first daughter had a somber look on her face as she entered the East Room ahead of the announcement

She had her hands clasped together, revealing her diamond engagement ring, which features a large, square, cushion-cut diamond.

Ivanka has mostly steered clear of ostentatious jewelry since she started working as a White House senior adviser, and she rarely wears the 5.22-carat jewel that is rumored to be worth over $500,000.

The eye-catching piece of jewelry was the only thing stood out from Ivanka’s simple yet elegant outfit, which consisted of a collarless suit coat and a matching skirt.

The first daughter wore her blonde lob center-parted and poker-straight, her go-to look as of late, and she stuck to her signature smokey eye and rose-colored lips.

Ivanka tried to raise a smile as she mingled ahead of the announcement, but she seemed to have something on her mind. 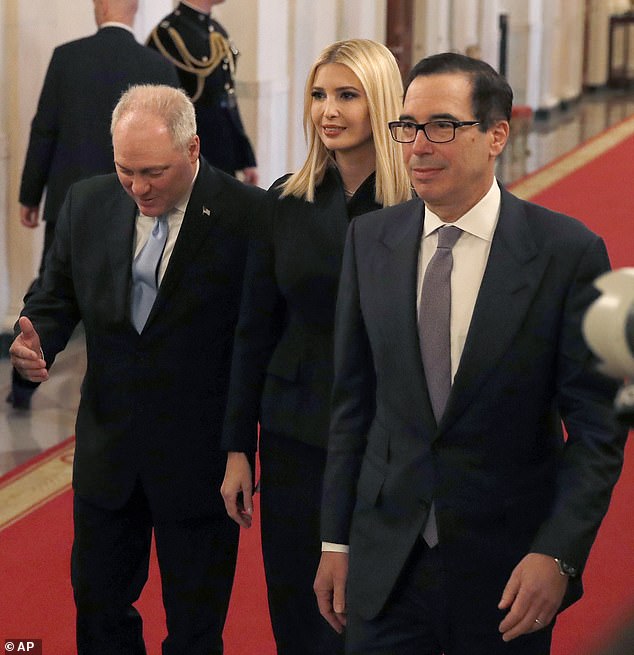 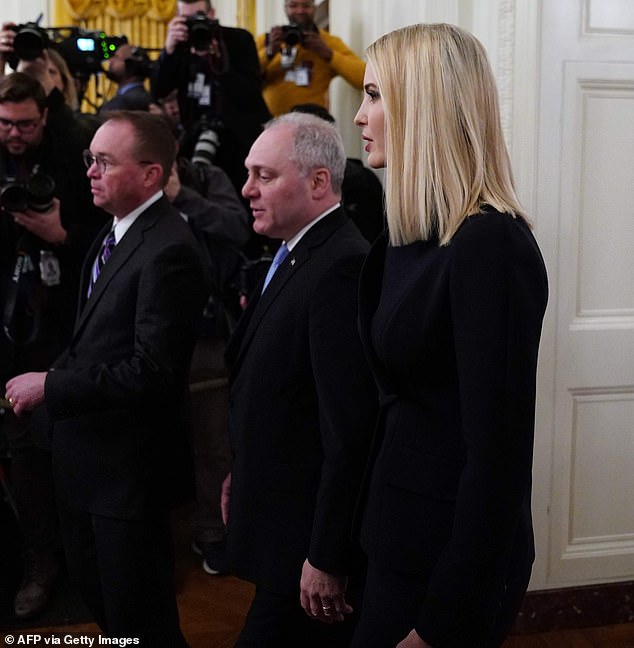 Her look: The first daughter wore her blonde lob center-parted and poker-straight, her go-to look as of late 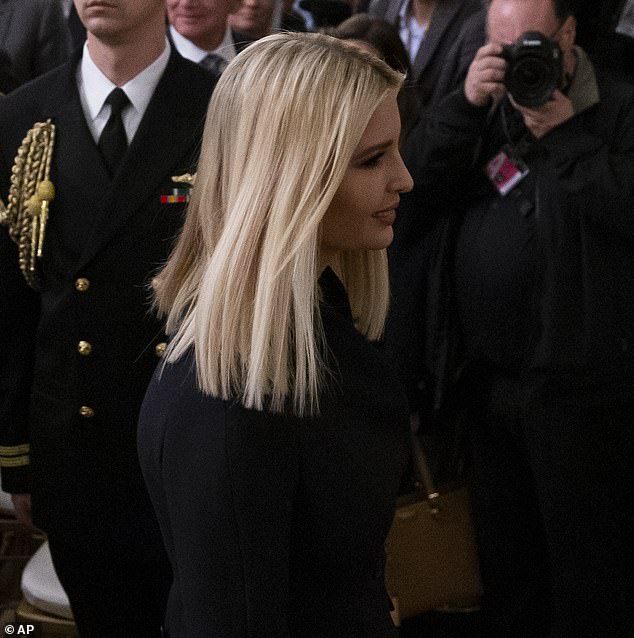 Not feeling it: Ivanka barely raised a smile as she walked by the crowd of photographers

Senate Republicans plan to meet on Tuesday and are expected to discuss whether to call witnesses in the president’s impeachment trial, NBC News has reported, citing four unnamed Republican aides.

With Trump’s defense team set to conclude their arguments on Tuesday afternoon, a vote on whether to call witnesses could happen later this week.

President Trump unveiled his long-awaited Middle East peace plan Tuesday, calling for the creation of a State of Palestine with its capital in portions of east Jerusalem.

He declared it a ‘win-win’ opportunity for both Israel and the Palestinians.

The plan ends speculation as to whether his administration, in preparing a proposal without input from Palestinian leaders, would abandon a ‘two-state resolution’ to the conflict. 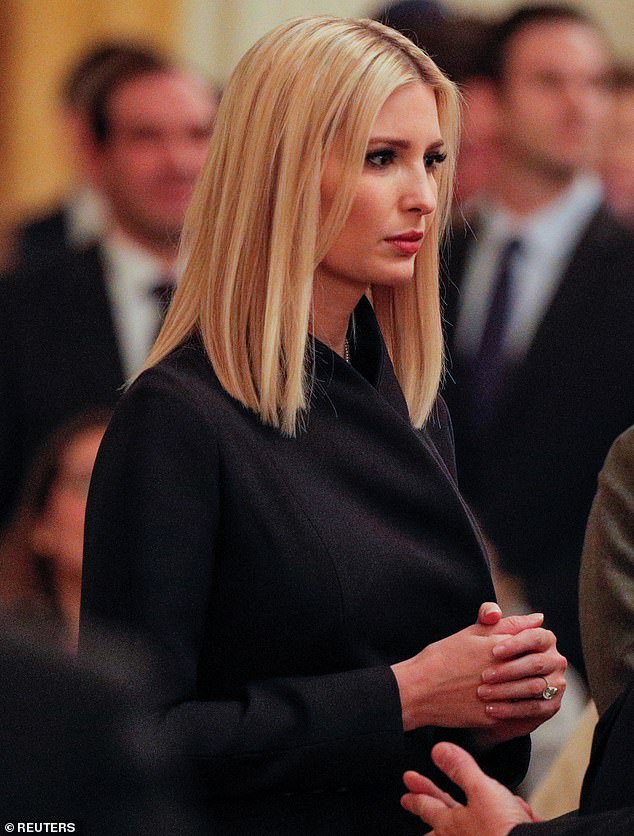 Focused: Ivanka had a serious look on her face and her hands clasped together as she spoke with Scalise ahead of the announcement 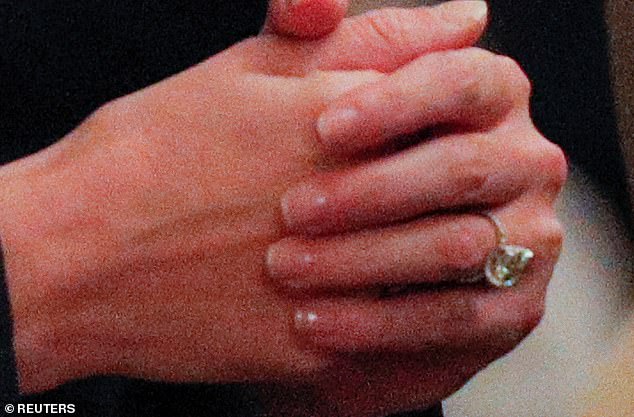 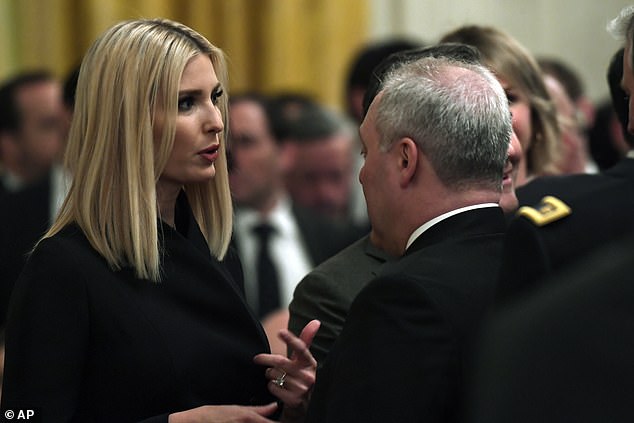 Special occasion: Ivanka rarely wears the 5.22-carat jewel that is rumored to be worth over $500,000

Trump released the plan before a pro-Israel audience at the White House with Prime Minister Benjamin Netanyahu by his side.

He acknowledged that he has done a lot for Israel, but he explained he wanted the deal to be a ‘great deal for the Palestinians.’ Trump said the deal is a ‘historic opportunity’ for Palestinians to achieve an independent state of their own.

The plan more than doubles the territory currently under Palestinian control, although it also recognizes Israeli sovereignty over major settlement blocs in the West Bank, something to which the Palestinians will almost certainly object.

The Palestinians have already rejected the proposal, accusing Trump of being biased in favor of Israel as he has adopted policies that bolster Israel at their expense.

The plan does call for a four-year freeze in new Israeli settlement construction, during which time details of a comprehensive agreement would be negotiated. 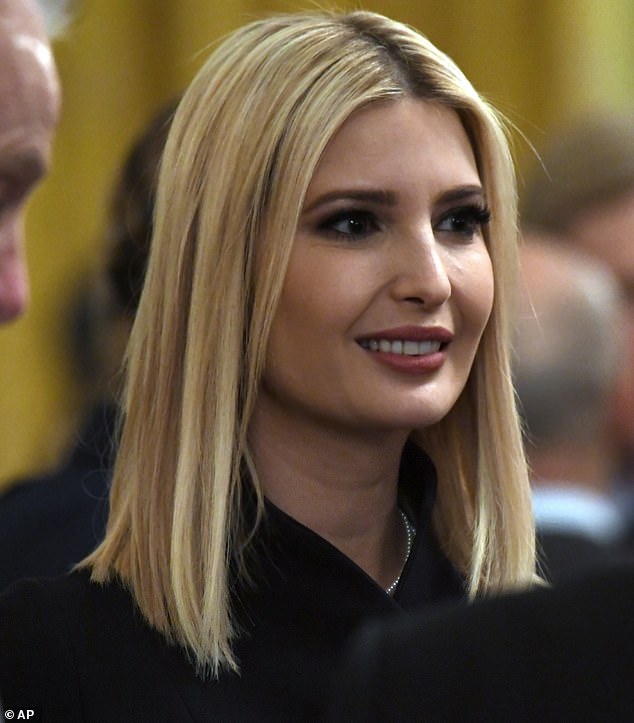 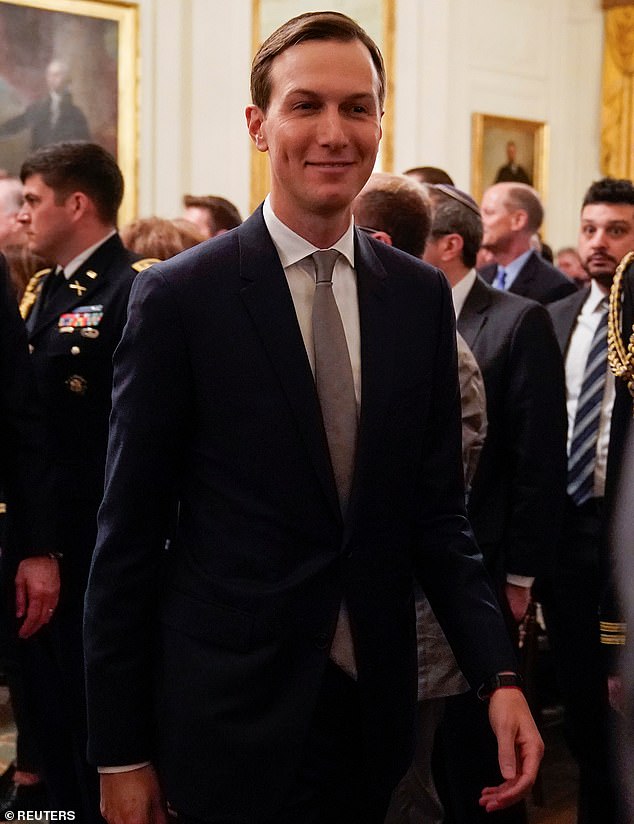 Political partners: Ivanka’s husband, Jared Kushner, was also on hand for the announcement 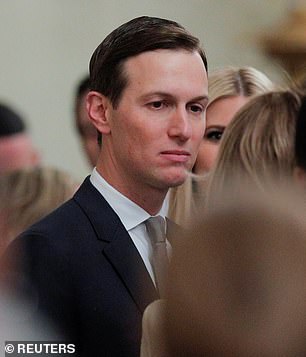 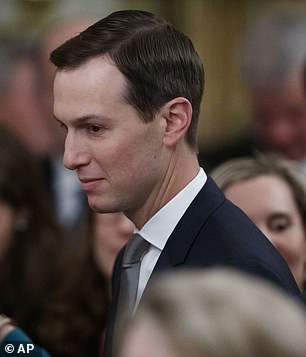 Failing to raise a smile: Jared, 39, also had a serious expression on his face as he made his way through the crowd 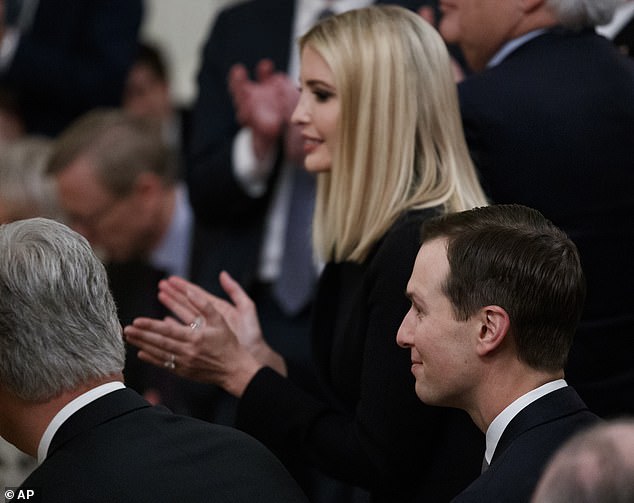 Proud: Ivanka applauded her husband when he was recognized during the event 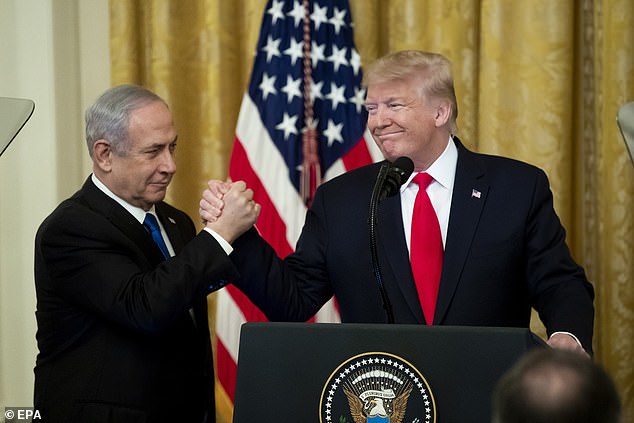 However, it was not immediately clear if the freeze could be extended if a final deal is not concluded in the four years.

The 50-page political outline goes further in concessions to the Palestinians than many analysts had believed was likely, but it would require them to accept conditions they have been previously unwilling to consider, such as accepting West Bank settlements.

It builds on a 30-page economic plan for the West Bank and Gaza that was unveiled last June and which the Palestinians have also rejected.

Under the terms of the ‘peace vision’ that Trump’s son-in-law and senior adviser, Jared, has been working on for nearly three years, the future Palestinian state would consist of the West Bank and Gaza, connected by a combination of above-ground roads and tunnels.

Netanyahu and his main political challenger in March elections, Benny Gantz, had signed off on the plan. 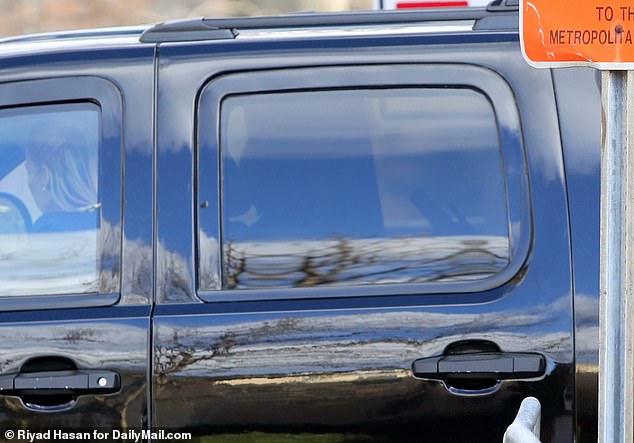 On the go: Ivanka was seen leaving her Washington, D.C. home in a Secret Service vehicle straight from her garage on Tuesday morning 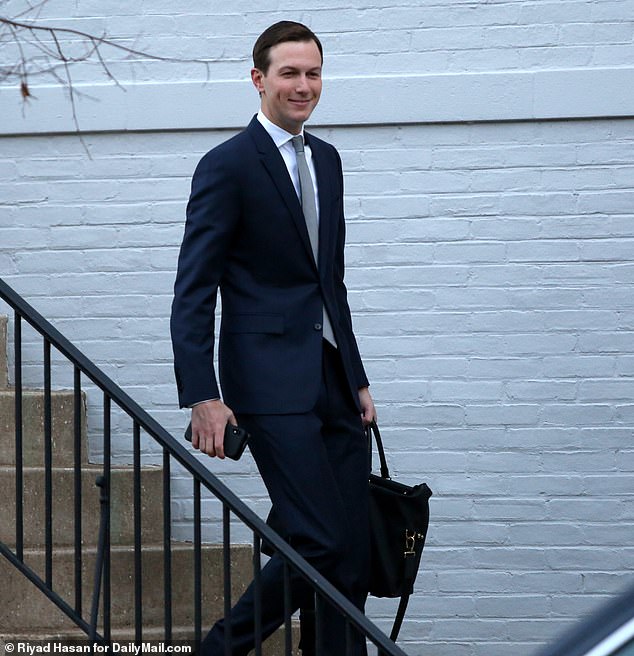 Headed to work: Jared smile as he stepped out the front door of their home around 7:30 a.m. 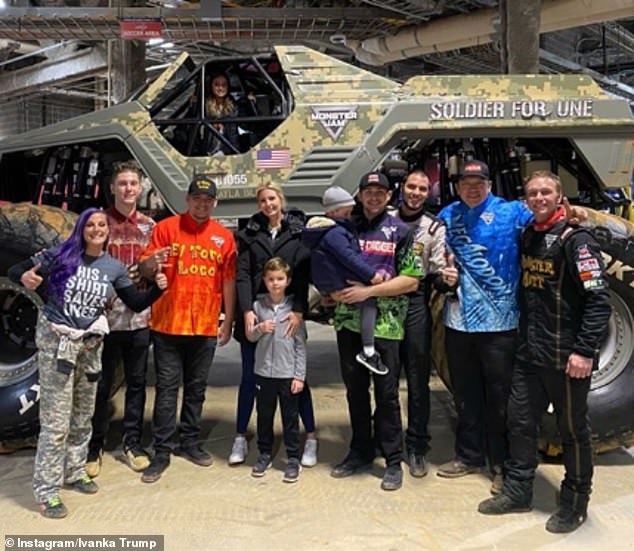 Backstage: Ivanka took her sons Joseph, six, and Theodore, three, to the Monster Jam show at Capital One Arena in Washington, D.C. on Sunday 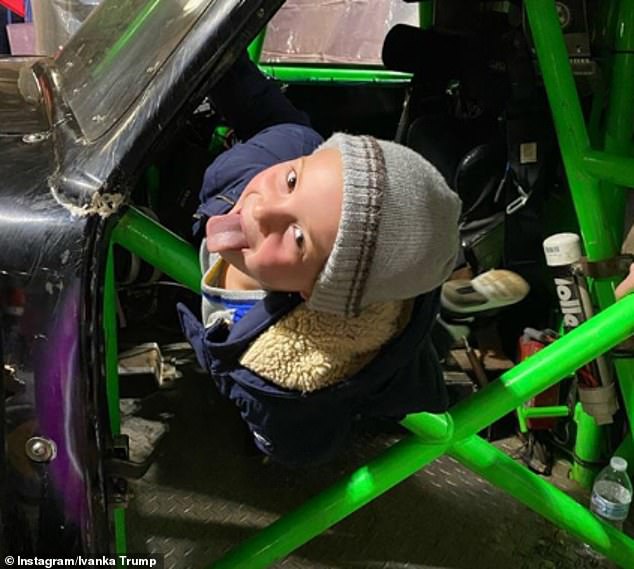 Say cheese! The mom snapped a photo of Theodore sticking his tongue out for the camera while sitting inside one of the monster trucks

Ivanka was seen leaving her Washington, D.C. home in a Secret Service vehicle straight from her garage on Tuesday morning ahead of the announcement.

Before starting the workweek, the first daughter enjoyed some quality time with her two sons at a monster truck show on Sunday.

She took to Instagram Stories to share videos and photos from the Monster Jam event at Capital One Arena, including pictures of her sons Joseph, six, and Theodore, three, backstage.

Ivanka looked happy to be back home with her children after spending most of last week at the World Economic Forum in Davos with her father and husband.

She took the stage last Wednesday to promote her father’s workforce initiatives wearing a blue polka-dot top with a large pussy bow under her $1,940 blue Max Mara suit jacket, which matched her $595 pants. 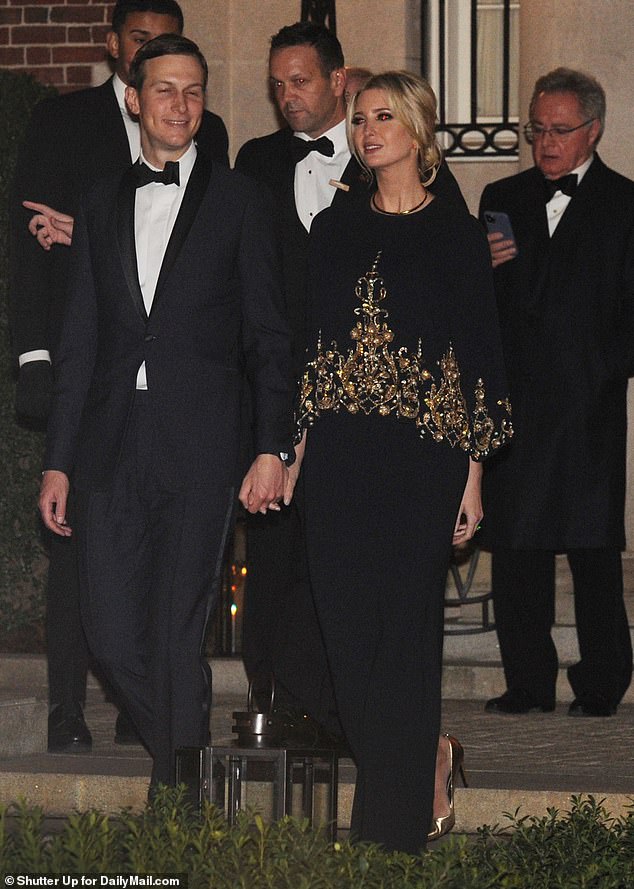 Date night: Ivanka and Jared attended the exclusive Alfalfa Club Dinner in D.C. on Saturday evening before stopping by Jeff Bezos’ after-party at his mansion 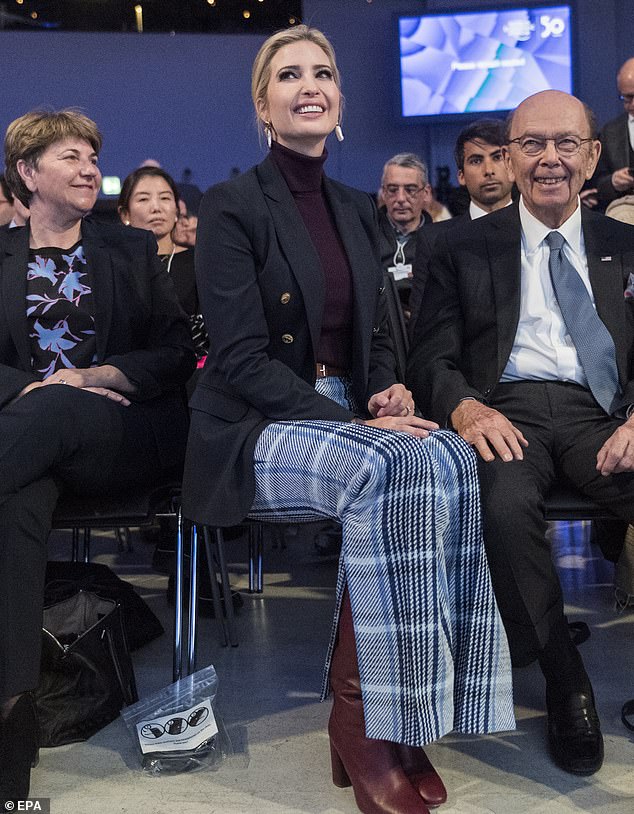 Busy: Ivanka spent last Tuesday through Friday in Davos, Switzerland, for the World Economic Forum. She is pictured at the last plenary session on Friday, the final day of the meeting 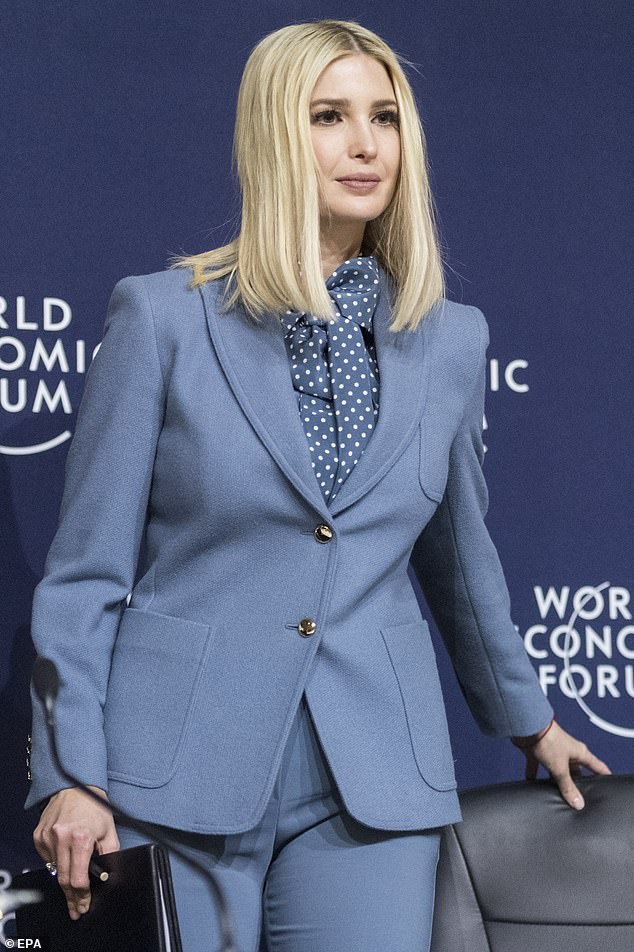 On Friday, the last day of the international conference, she donned a burgundy turtleneck underneath a $498 Brooks Brothers blazer and a pair of $595 blue checked trousers by Akris.

Ivanka could be seen beaming from ear to ear as she sat alongside the World Economic Forum founder Klaus Schwab and Swiss defense minister Viola Amherd.

If she was struggling with jet lag on Saturday after she arrived home, she pushed through it and enjoyed a night out with her husband, Jared.

The Amazon founder purchased the $23 million property in D.C. in 2016, and it underwent three years of renovations and construction.

The 27,000-square-foot home is tucked in the city’s wealthy Kalorama district near the residences of former President Barack Obama and the Trump-Kushner family.