Ivanka Trump proudly showed off her fan mail on social media this week, but if she thought the images would elicit even more praise, she was sorely mistaken.

The 35-year-old First Daughter and White House senior adviser took to Instagram and Twitter on Thursday to share a photos of herself sorting through the letters and drawings she has recently received.

‘Overjoyed by these beautiful letters. Reading them is one of the highlights of my week,’ she wrote. However, it is probably safe to say she didn’t have quite as much fun sorting through the slew of negative comments the images attracted.

Out of touch? Ivanka Trump received plenty of backlash after she took to social media to share a photo of herself sorting through her fan mail 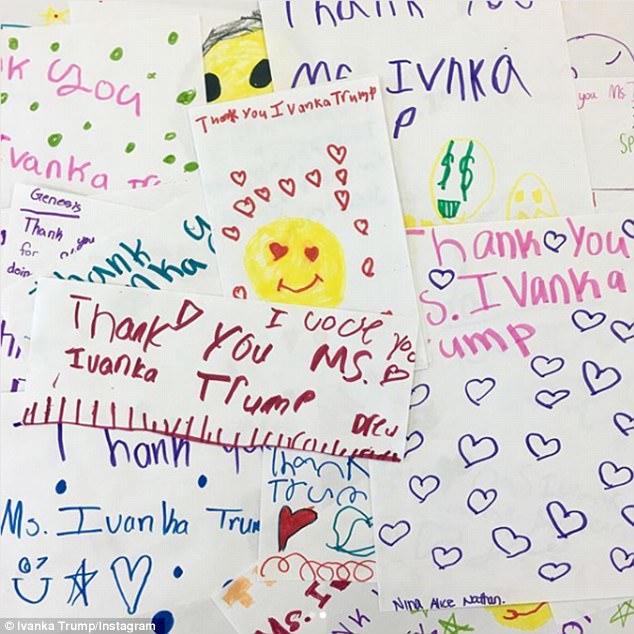 Mystery: A close-up image of the cards, which appear to be written by children, shows that the messages are filled with gratitude, although it is unclear what they are thanking her for

Overjoyed: The 35-year-old said the reading the ‘beautiful letters’ is one of the ‘highlights’ of her week

The first photo sees Ivanka sitting large conference table while sorting through the letters while the second picture is a close-up image of the thank you notes.

It’s unclear what exactly the expressions of gratitude are for, and critics have had a field day tearing her apart in the comments sections of her posts.

Many people insinuated that the praise had to be coming from her father, President Donald Trump, who was accused of penning the child-like letters himself.

‘Wow! How does @realDonaldTrump find the time to write so many letters!?’ tweeted Stephen Harper, while Steve Schreiber wrote: ‘Wow, your dad’s drawings look great.’

Backlash: Many people insinuated that the praise had to be coming from her father, President Donald Trump, who was accused of penning the child-like letters himself

Others deduced that the fan mail had to be coming from other Trump staffers, including White House press secretary Sarah Huckabee Sanders.

Critics of of the Trumps were quick to zoom in on handmade card that featured a face with dollar signs for eyes.

‘Whatever staffer made these fake letters to Ivanka Trump, I loved this little touch – was it a commentary on being blinded by greed?’ Lennie Briscoe wrote. 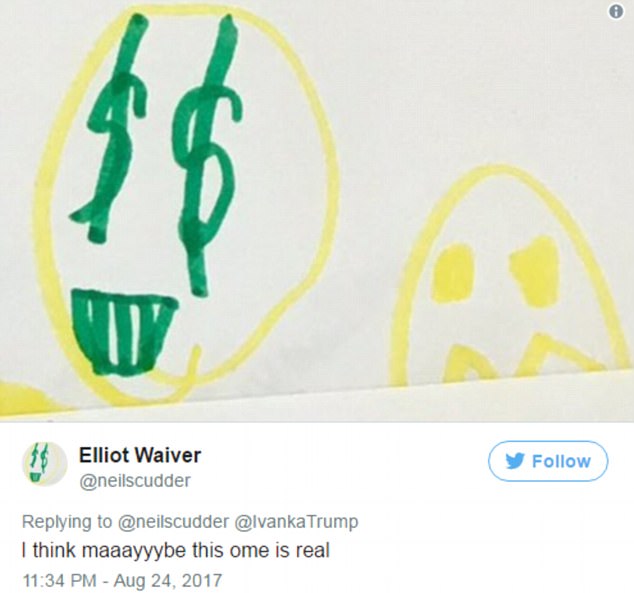 Greed: Critics of of the Trumps were quick to zoom in on handmade card that featured a face with dollar signs for eyes

Elliot Waiver also shared that particular image and joked that ‘maybe this one is real’, while a woman named Jill reference the drawing, as well, noting: ‘This kid nailed it’.

And for one Twitter user known as OneEyedDogMama, the card was a sign of the deterioration of American values at the hands of the Trumps.

‘Dollar Signs for Eyeballs=The Trumping Down of America,’ she wrote. ‘First Family used to teach children to value respect & compassion over pure greed.’

There was a similar amount of ire in the comments section of her Instagram post, with one woman writing: ‘Coming from a family of compulsive liars, thieves and greedy people who will do anything for fame and money. 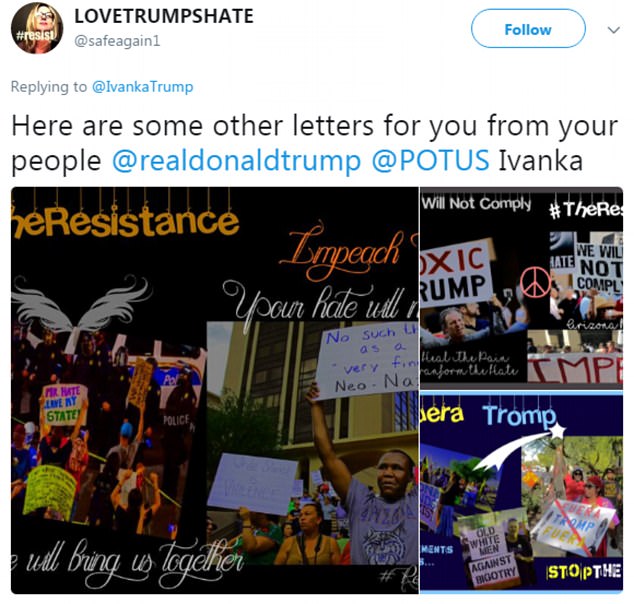 Outrage: Many people slammed Ivanka in the comments section, with some accusing staffers of writing the cards and others questioning what what she actually does at the White House

‘I’d have a 3rd party verify the legitimacy of those letters,’ she added. ‘The apple doesn’t fall far from its tree #FakeNews #ImpeachTrumpNow.’

‘I’m glad you’re popular among 6 year olds. You’re definitely not popular among women who see through your self glorifying social media posts,’ another Instagram user added. ‘What exactly have you accomplished since being in the WH?’

Although Ivanka’s posts incited plenty of vitriol on social media, there were loyal followers who thought the photo was just adorable.

‘I still have some of the letters & cards that my kids made in school… or for Mothers Day, Birthday’s <3 #precious #SoSweet #WeLoveYouIvankaTrump’ Brenda Orton wrote on Instagram. 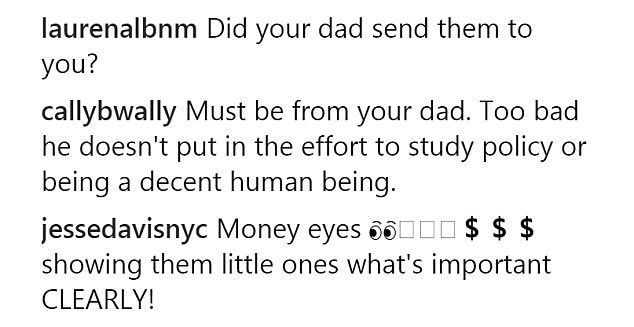 Under fire: There was a similar amount of ire in the comments section of Ivanka’s Instagram post

‘Those letters are from actual fans of hers who respect her and love her something you hating SOABS will never know,’ someone else added.

And while it was probably hard to ignore all the backlash, Ivanka did just that.

Trump’s eldest daughter returned to Twitter on Friday afternoon to say she is ‘praying’ for those who are in the path of Hurricane Harvey, which is speeding toward the Texas coast.

‘For those in #HurricaneHarvey’s path, we are praying for you. Please check out http://hurricanes.gov for preparedness tips. Stay safe!’ she tweeted.

Unsurprisingly, that tweet didn’t win Ivanka any favor with her critics either.

Fan club: Some loyal fans thought that the photos were ‘so sweet’ and ‘precious’

Take that: Other critics accused Ivanka of ignoring recent tragic events, including the hurricane barreling toward Texas and the race riots in Charlottesville, Virginia

‘Prayers? How about appointing someone to be in charge of disaster relief instead?’ Bryan Dzyak tweeted.

A spoof Twitter account known as ‘President Pence’: replied: ‘We tried but her wedding planner was otherwise occupied. We’re desperately trying to reach her manicurist but they’ve blocked us.’

The Department of Homeland Security, which is in charge of the Federal Emergency Management Agency (FEMA) and the U.S. Coast Guard, still doesn’t have a permanent leader following the president’s decision to make former Secretary of Homeland Security, General John Kelly, his White House chief of staff.

Like Teflan: Ivanka ignored the criticism and returned to Twitter on Friday to say she is ‘praying’ for those in the path of Hurricane Harvey

Acting Secretary of Homeland Security Elaine Duke has taken the helm, but she is not the only interim official who is running the federal government’s response efforts.

FEMA administrator Brock Long was confirmed in June, but the two deputy directors Trump had nominated for FEMAL have yet to be confirmed to their positions.

Meanwhile, the National Oceanic and Atmospheric Administration is still waiting for the president to nominate a leader for the weather monitoring agency.

Ivanka received similar backlash earlier this month when she asked her social media followers to ‘pray for Barcelona’ after Spain was hit with two terrorist attacks.

Plenty of people accused her for ‘hypocrisy’ and ignoring ‘domestic terrorism’ by failing to share similar prayers for  Charlottesville riot victim Heather Heyer.