Ivanka Trump models a $3,800 outfit as she steps out in New York

Ivanka Trump looked glamorous in a cream Bottega Veneta sweater and skirt as she stepped out of her New York City apartment on Monday ahead of her talk at the 2018 Concordia Annual Summit.

The 36-year-old first daughter donned the label’s $1,640 botanical print cashmere cardigan over a matching $1,230 short-sleeved cashmere sweater and a $950 duchesse skirt to speak about the Trump administration’s recently-launched Pledge to America’s Workers initiative.

Secret Service agents kept a watchful eye as Ivanka left her Upper East Side apartment and made her way to the Grand Hyatt Hotel in Midtown, where the two-day summit is taking place.

Kicking off the week: Ivanka Trump was seen leaving her New York City apartment on Monday

On the go: The 36-year-old was headed to the Grand Hyatt Hotel in Midtown to speak at the 2018 Concordia Annual Summit

The senior adviser kept her legs bare and accessorized her Bottega Veneta outfit with a pair of nude heels.

Her long blonde hair was parted down the center and styled in loose girls for the nonpartisan forum, which is taking place during the 73rd session of the United Nations General Assembly.

Although Ivanka traveled to the Big Apple with her husband, Jared Kushner, and their three children, they all left the house separately on Monday morning.

Jared, 37, was seen leaving the apartment in a navy suit with file folders held under his arm as he made his way to the black SUV that was waiting for him at the curb. 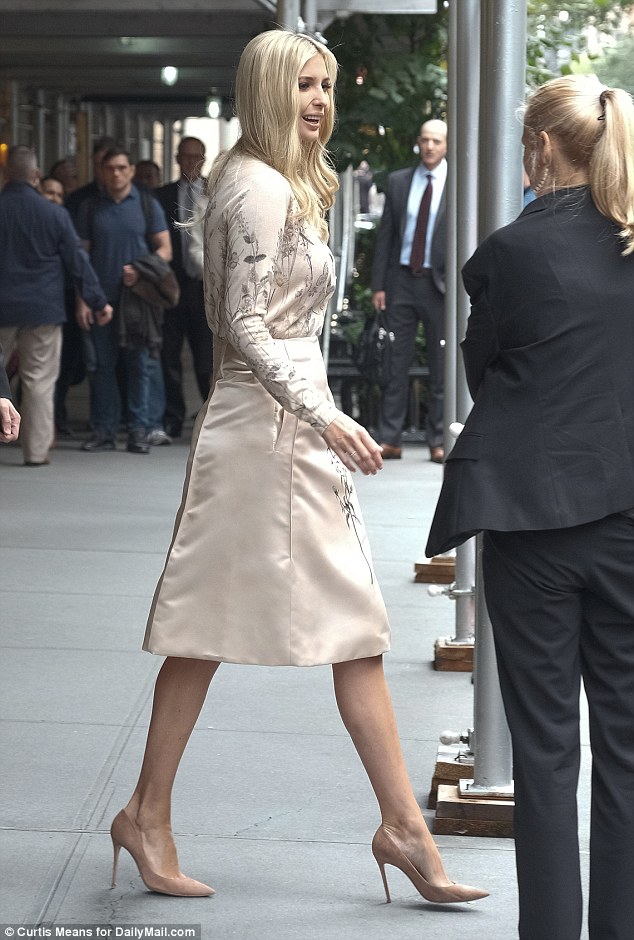 Going glam: Ivanka donned a $1,640 botanical print cashmere cardigan by Bottega Veneta over a matching sweater and a $950 duchesse skirt

Added touch: The senior adviser topped off the look with a pair of nude heels, and she wore her hair in loose curls 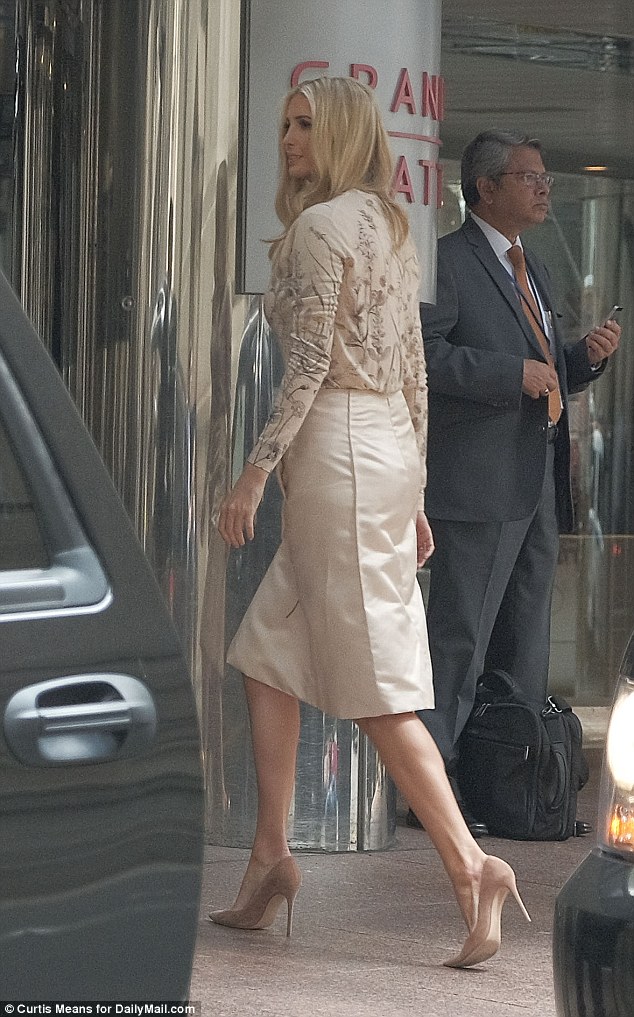 Arrival: Ivanka was seen getting out of her black Secret Service SUV and walking into the hotel

Meanwhile, their children Arabella, seven, Joseph, four, and Theodore, two, headed out with a woman who appeared to be their nanny.

Ivanka was later seen getting out of her black Secret Service SUV and walking into the hotel before she took the stage.

She was joined by Concordia Co-Founder, Chairman and CEO Matthew Swift for her talk on the first day of the summit.

As an adviser to the president, Ivanka has been focusing on job creation and economic growth through workforce development.

At the summit, she spoke about the White House’s Pledge to America’s Workers and the National Council for the American Worker. 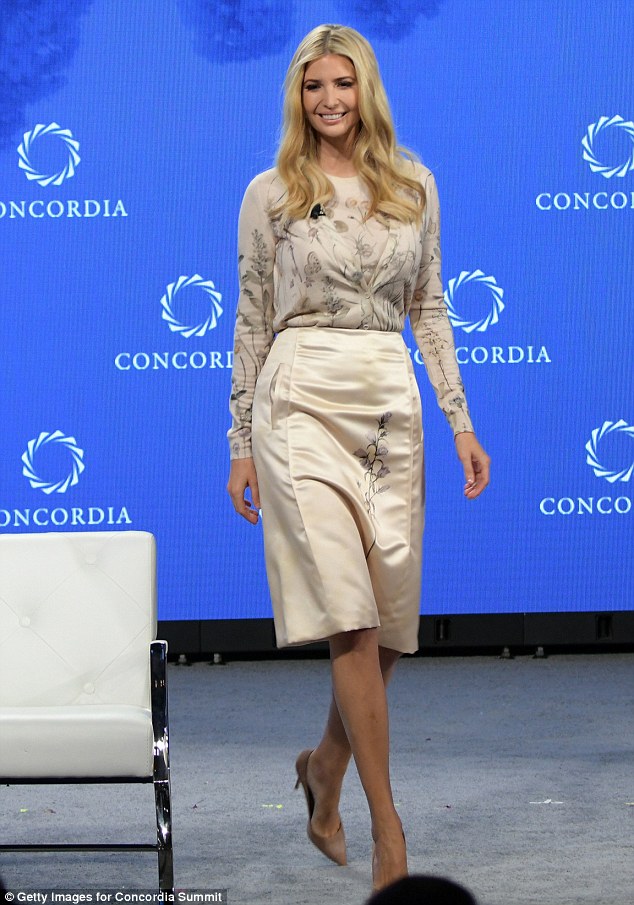 Spotlight: Ivanka was all smile as she took the stage on the first day of the summit 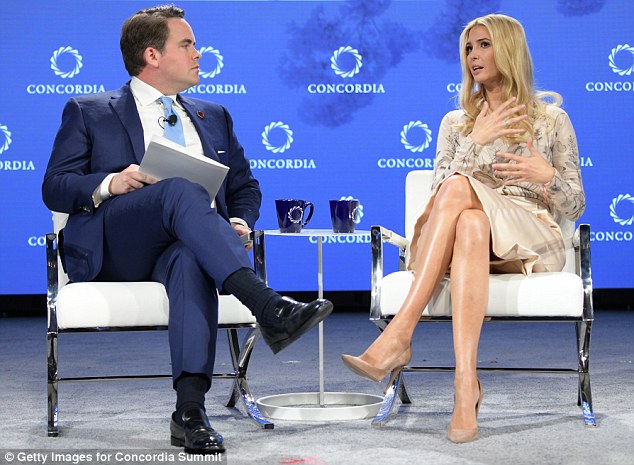 Chatting away: She was joined by Concordia Co-Founder, Chairman and CEO Matthew Swift 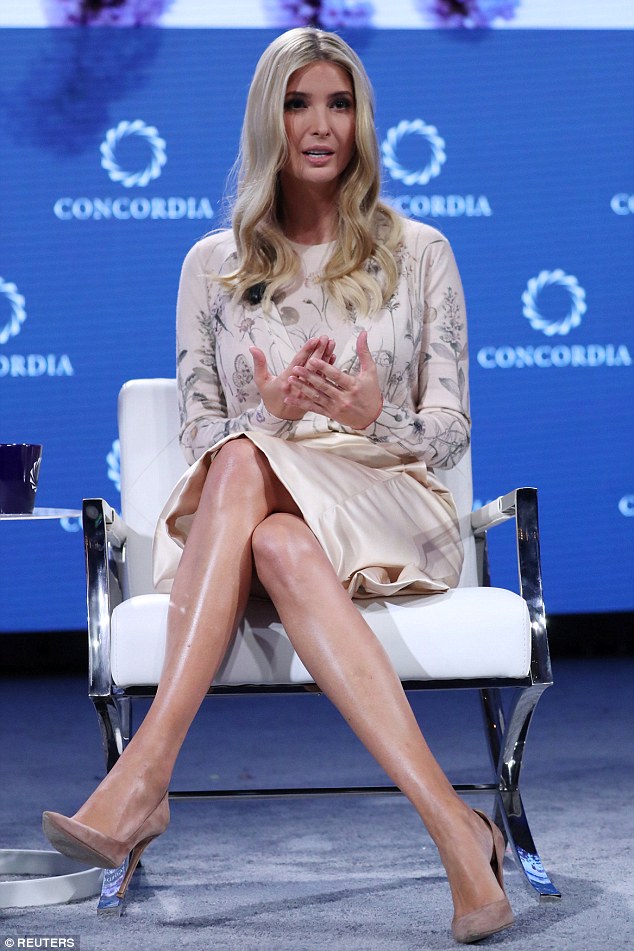 Workforce development: She talked about the Trump administration’s recently-launched Pledge to America’s Workers and National Council for the American Worker at the event

Both were created to help better equip American workers and students with the skill and training to succeed in the changing economy.

Ivanka sat in a white leather chair with her legs crossed as she animatedly spoke on stage during the talk.

After her talk, she was seen returning to her New York City apartment

Over the weekend, while Ivanka was in New York, celebrities took to social media to urge Ivanka to support Christine Blasey Ford, who has accused Supreme Court nominee Brett Kavanaugh of sexual assault.

Busy Philipps, Sophia Bush, Chelsea Handler, Alyssa Milano, Debra Messing, and Melanie Griffith are among the stars who used the hashtag #DearIvanka while posting a message asking the first daughter to get the Trump administration to conduct a fair FBI investigation looking into Ford’s allegation. 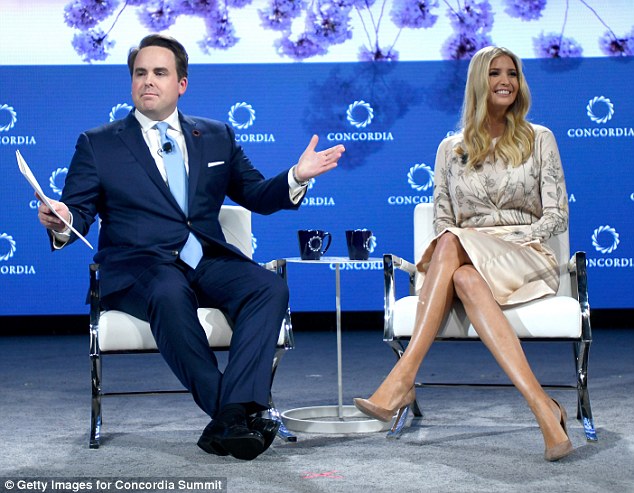 Natural performer: Ivanka sat in a white leather chair with her legs crossed 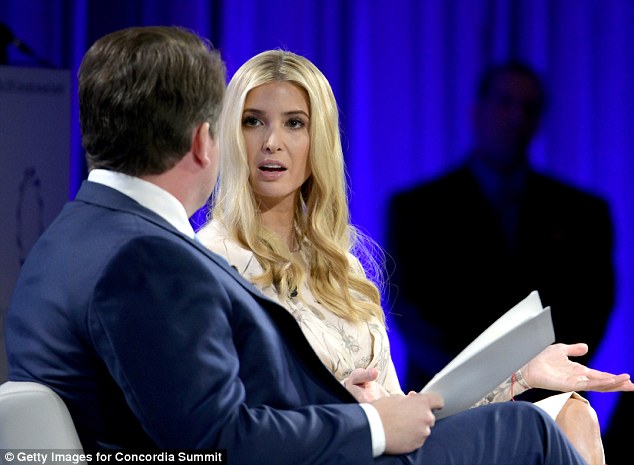 Passion: As an adviser to the president, Ivanka has been focusing on job creation and economic growth through workforce development 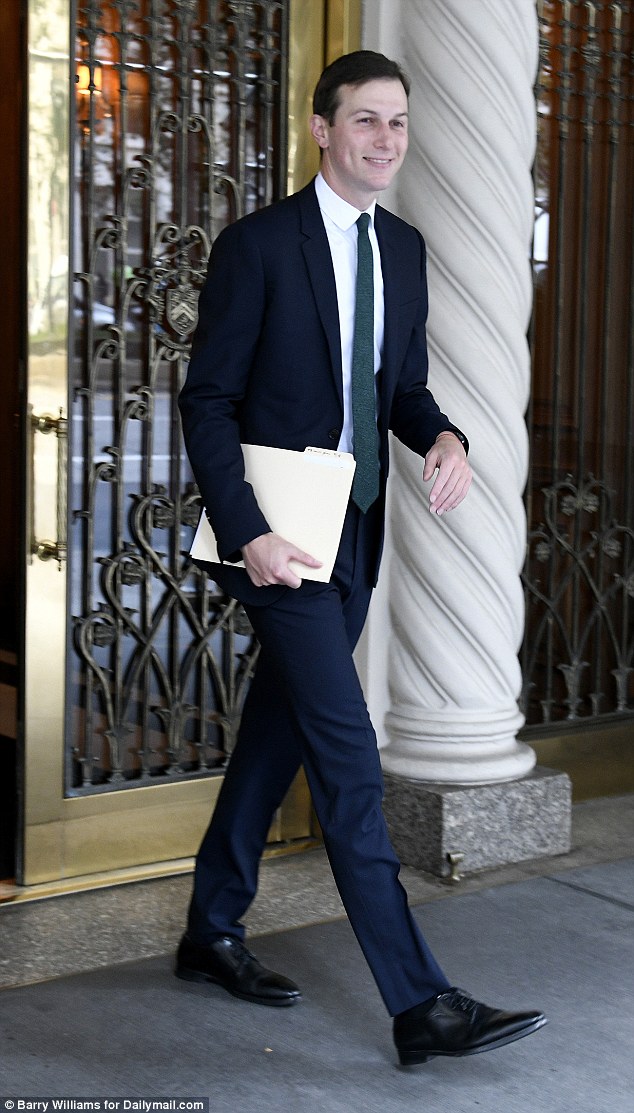 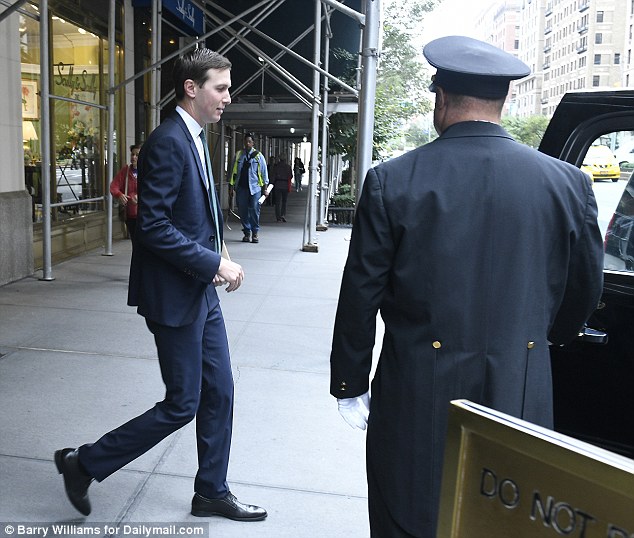 Heading out: Jared had file folders held under his arm as he made his way to the black SUV that was waiting outside the building for him

‘#DearIvanka, You don’t follow me on social media. But as a public servant, you work for me,’ the message begins. ‘You’ve proclaimed yourself a feminist and a champion of women’s rights.

‘Right now, you have an opportunity to fight for women. Use your access to demand that Professor Ford’s request for a full, fair, trauma-informed investigation by the FBI be held.’

Ford alleges that when she was 15, she was assaulted by then-17-year-old Kavanaugh when he was drunk while egged on by a male friend. 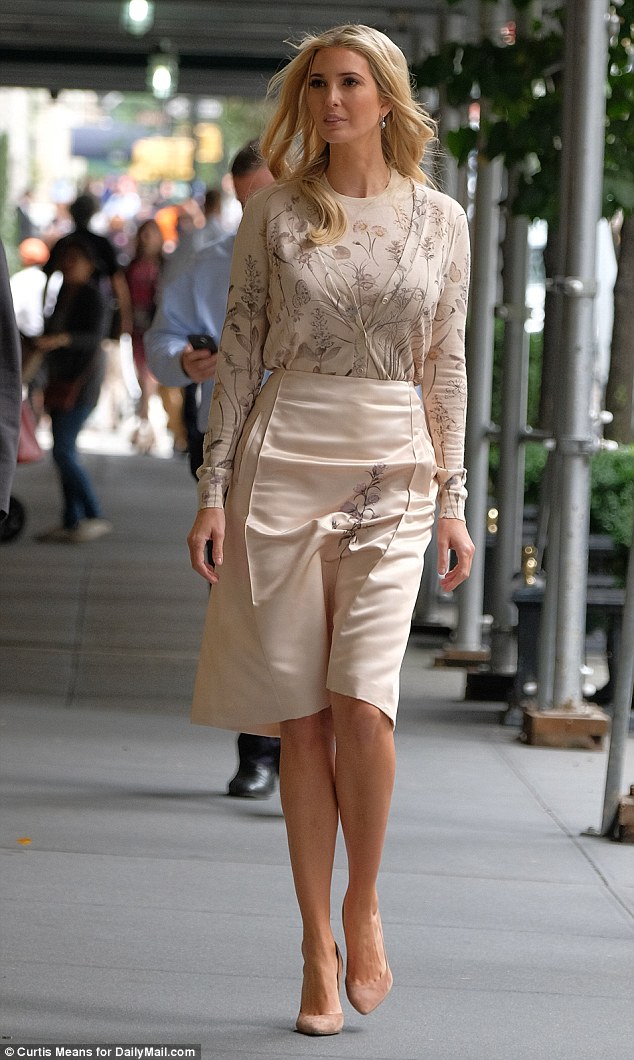 All done: Ivanka was later seen returning to her apartment after her summit talk

Back home: The first daughter walked down the street and made her way into her building 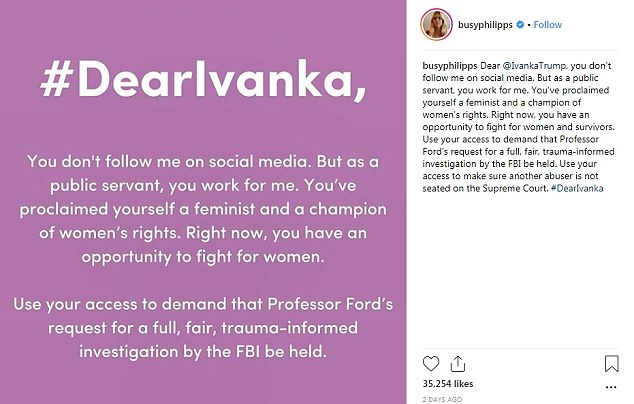 The professor sent a letter to California Senator Dianne Feinstein in July detailing the allegations stemming from the 1982 incident.

Ford will testify before a Senate panel on Thursday about her allegation, her lawyers and the committee said on Sunday.

Meanwhile, Deborah Ramirez, 53, has claimed that Kavanaugh ‘thrust his penis in her face and caused her to touch it without her consent’ during a dorm party at Yale University in the 1980s.

The alleged incident, which is said to have taken place during the 1983-84 academic year, was first reported on Sunday by The New Yorker.

Kavanaugh has denied both allegations.