Ivanka Trump looked like she meant business as she left her Washington, D.C. home on Friday morning on her way to address a human trafficking summit at the White House.

The 38-year-old put her most fashionable foot forward for the event, wearing a white linen dress that featured flowing sleeves, a trendy raw hem, and a flattering belt at the waist.

She then accessorized the look with a large gold brooch, and her engagement ring – which she only occasionally tends to wear.

On the move: Ivanka Trump stepped out in a white linen dress on Friday morning as she made her way to the White House to attend a human trafficking summit 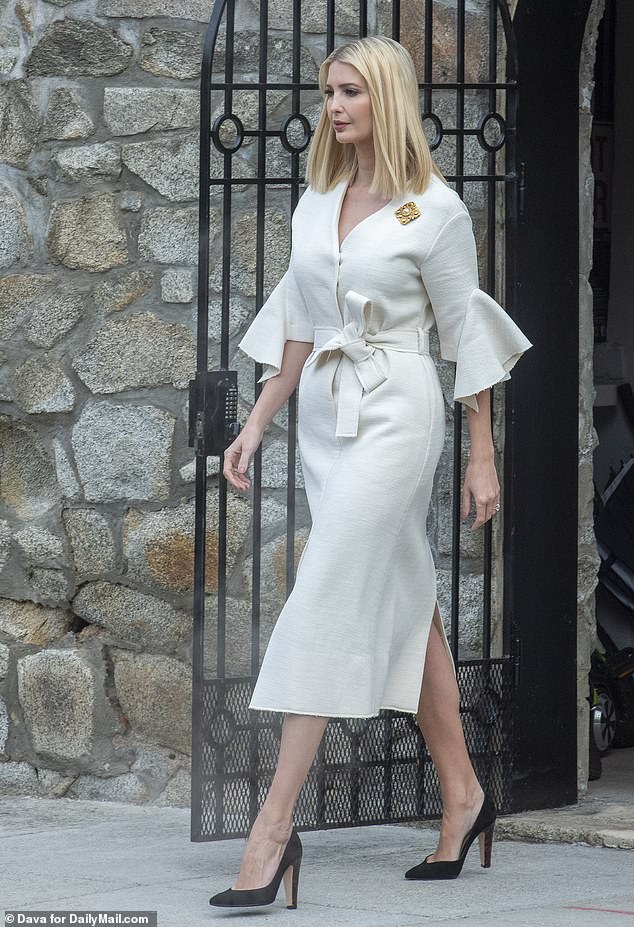 Glam: The 38-year-old looked chic in the belted number, which she accessorized with a large gold brooch 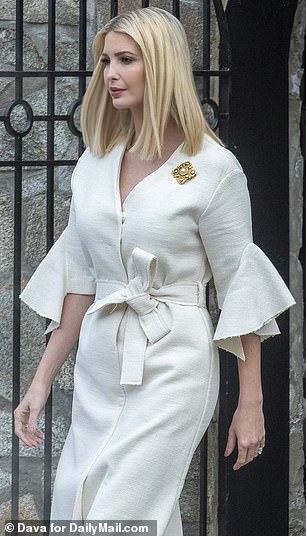 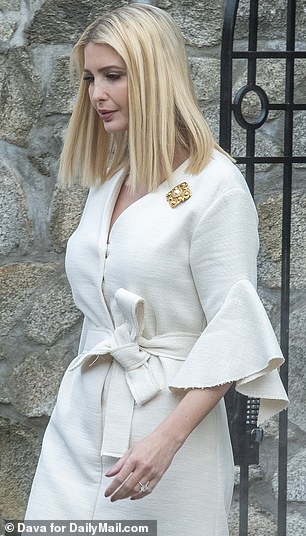 Woman on a mission: Ivanka kept a straight face as she made her way into a waiting SUV that then sped her off to the White House 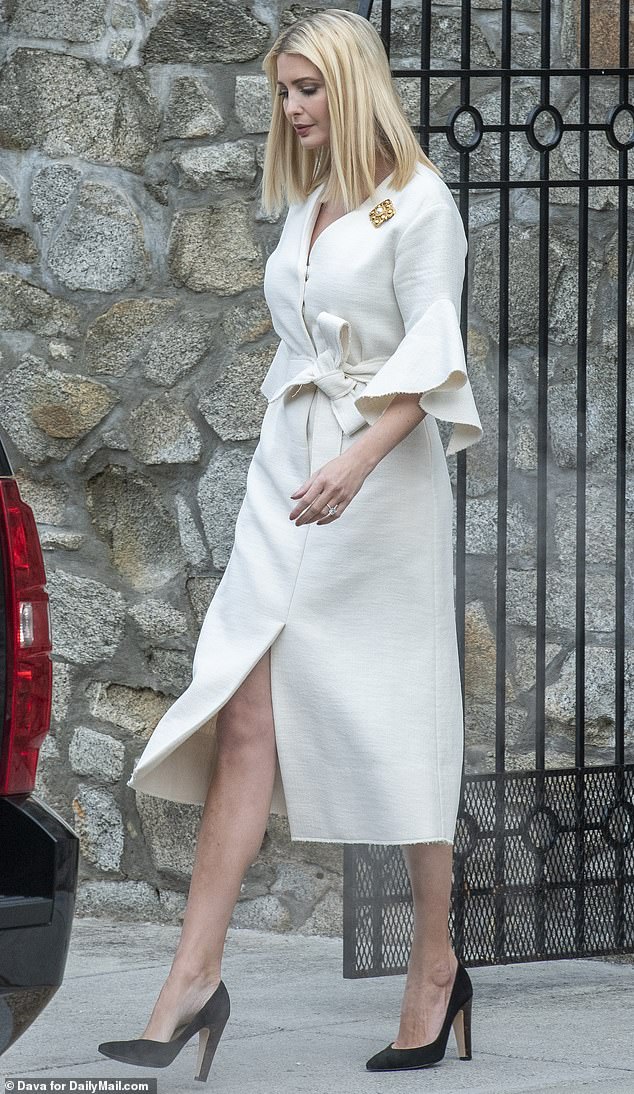 Speaking out: The mother-of-three took to Twitter before the event to encourage her followers to tune in to a livestream of the event

Ivanka completed the look with a pair of black pointed-toe heels, while her blonde hair was styled in a sleek straight style around her shoulders.

She also modeled a glamorous makeup look for the day, complete with a pale smokey eye and a dark rosy lipstick. 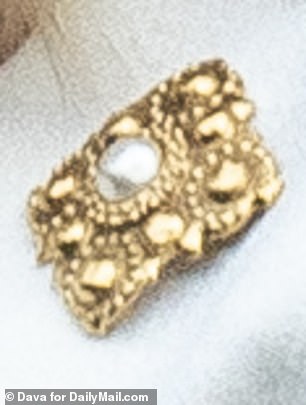 Glitzy: She added some bling to her ensemble with a gaudy gold brooch that was pinned to her dress

The first daughter kept her head down as she made her way to a waiting SUV, which then ferried her to the White House in order to attend a human trafficking summit, where her father, President Donald Trump, will sign an executive order ‘strengthening our resolve to hold perpetrators accountable & restore human dignity for victims’.

Shortly before the summit, Ivanka took to Twitter to encourage her followers to tune into a livestream of the event, writing: ‘24.9 M people are trapped in forced slavery, domestic servitude or sex trafficking, many in America.

Ivanka herself made the opening remarks at the event, taking to the stage to introduce key attendees, while also discussing the work that the Trump administration has already done in order to combat what the first daughter referred to as an ‘evil scourge’.

After discussing the government’s future plans to further fight human trafficking in the US, Ivanka then introduced a victim named Jessica, whom she met earlier this month while visiting a facility for survivors in Atlanta. 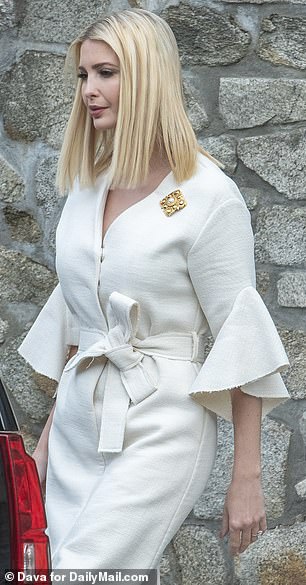 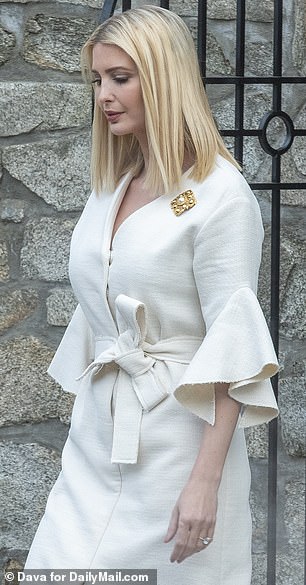 Looking good: In preparation for her public appearance, Ivanka looked as though she had undergone a glam session at her house 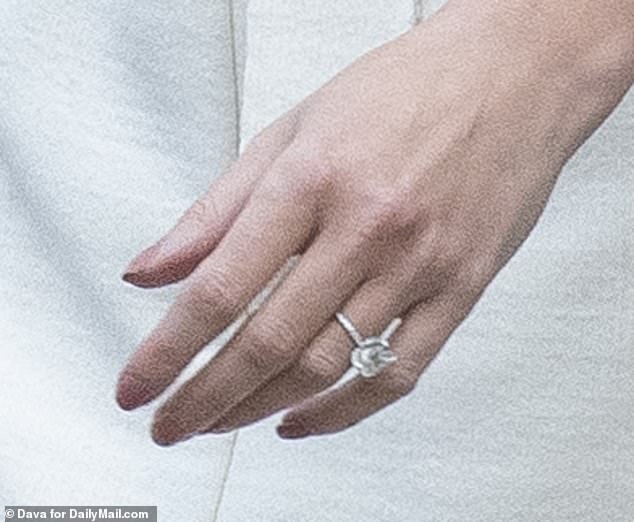 Sparkler: Ivanka was wearing her large engagement ring, an accessory that she only models on rare occasions 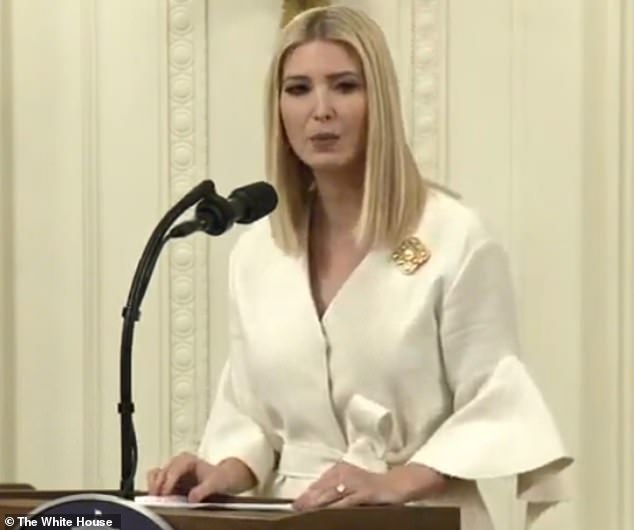 Speaking out: She made a passionate introductory speech at the summit, during which she addressed the work that the Trump administration has already done to end human trafficking 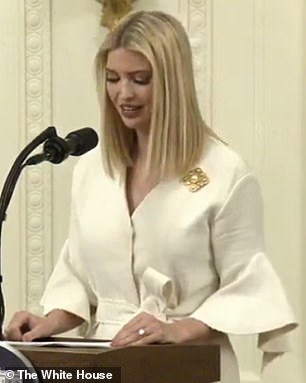 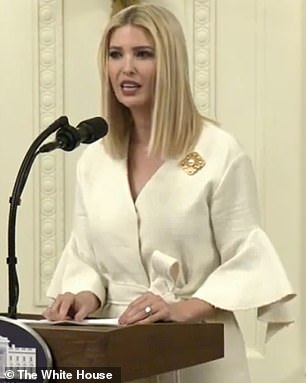 Promise: At the end of her speech, Ivanka vowed to the guests, ‘We will be successful in ending this evil scourge’

The first daughter described the struggle that Jessica faced as a young woman who was introduced to drugs at the age of eight, before welcoming her onto the stage to share her story with attendees.

Jessica explained how she eventually ended up in jail, before being helped by someone who recognized her as a victim of human trafficking rather than a criminal and helped her to gain new purpose and direction in her life. 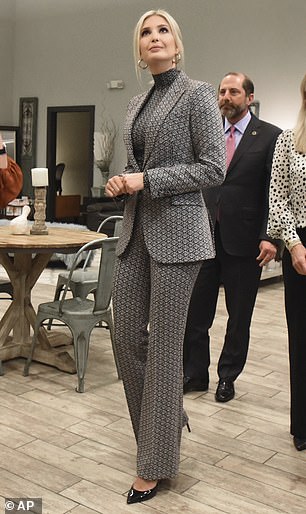 Visit: Ivanka traveled to Atlanta, Georgia, earlier this month to meet with human trafficking survivors as part of the Trump administration’s anti-trafficking efforts

From there, Jessica completed an internship with Delta, where she continues to work to this day.

Ivanka and Jessica first met earlier this month in Atlanta when the first daughter traveled to Atlanta, Georgia, to meet with human trafficking survivors.

At the time, the White House senior advisor took to Instagram Stories to promote the visit, which was part of the Trump administration’s efforts to combat human trafficking.

‘An estimated 12,400 sex trafficking transactions take place in Atlanta each month,’ she wrote. ‘This morning I will visit two safe havens that provide women with the opportunity for rescue, restoration, and a chance to start a new life.

‘I look forward to hearing from survivors and counselors and learning from their stories and experiences.’

She was joined by Georgia Gov. Brian Kemp and his wife, Marty Kemp, the co-chair of the Georgians for Refuge, Action, Compassion, and Education Commission (GRACE).

Applauding Jessica’s emotional speech, Ivanka returned to the stage to conclude her own address, vowing guests at the summit: ‘We will be successful in ending this evil scourge.’

It has been a busy few weeks for Ivanka, who has attended several major events at the White House; on Wednesday she stood out from the crowd in a red Carolina Herrera coat as she watched her father sign the U.S.-Mexico-Canada Agreement. 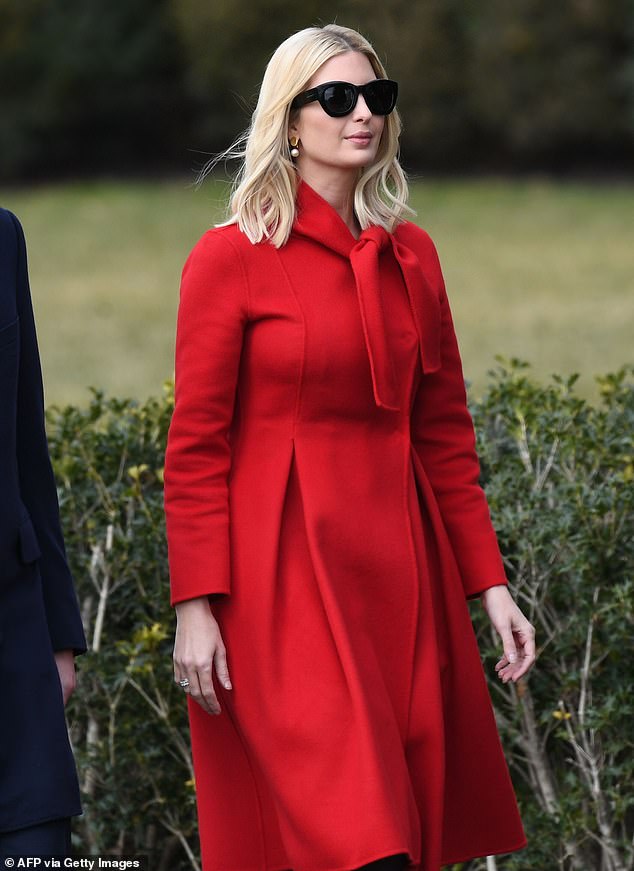 First daughter duties: Ivanka watched her father sign the U.S.-Mexico-Canada Agreement on the South Lawn of the White House on Wednesday 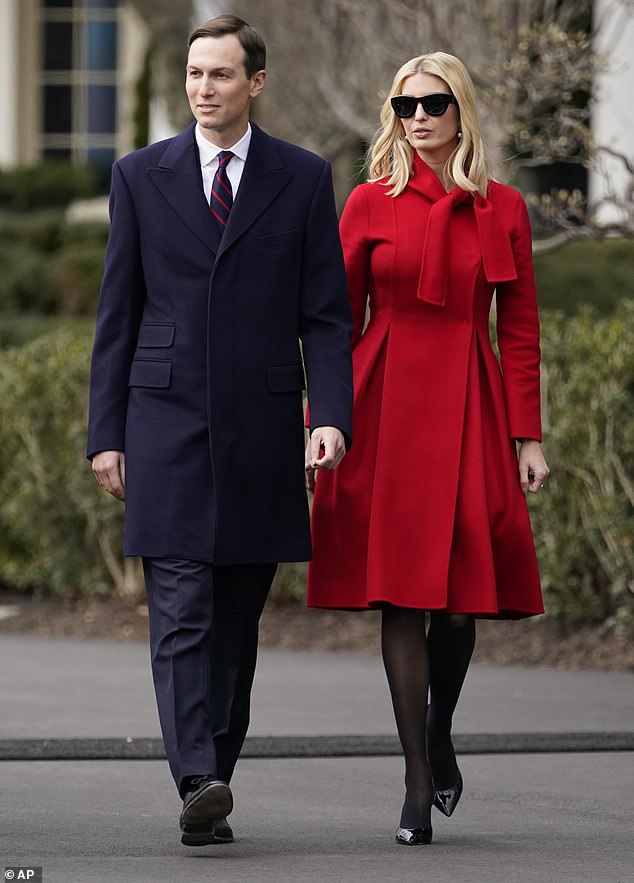 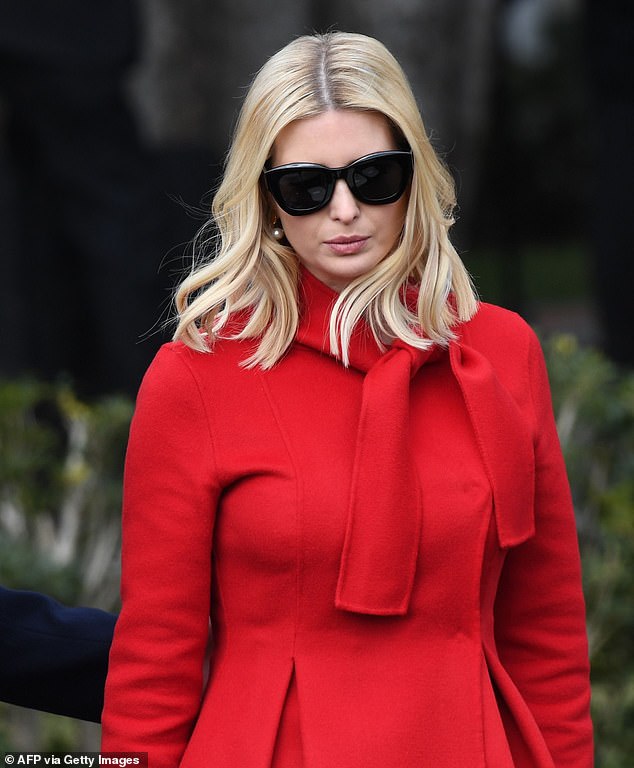 All done up: The 38-year-old’s blonde lob was styled in loose waves, and her dangly pearl earrings peeked out from underneath her hair

Ivanka was seen arriving on the South Lawn of the White House with her husband and fellow White House senior adviser, Jared Kushner, ahead of the ceremony.

The temperature was in the low 40s, and Ivanka kept warm in her fit-and-flare double-faced coat with a scarf, which she paired with sheer black tights and black patent leather heels.

The mother of three added a touch of glamour to her look by sporting a pair of dark, oversized shades that shielded her eyes from the sun.

Her blonde lob was styled in loose waves, and her dangly pearl earrings peeked out from underneath her hair.

For the second day in a row, Ivanka had on her large, square, cushion-cut diamond engagement ring.

The former businesswoman has mostly steered clear of ostentatious jewelry since she started working as a White House senior adviser, and she rarely wears the 5.22-carat jewel that is rumored to be worth over $500,000.

Ivanka was first seen wearing it in October when she walked her three children to their local synagogue to celebrate the Jewish holiday of Shemini Atzeret.

Meanwhile, Jared, 39, sported a navy wool coat over his standard navy suit, though he jazzed up his signature work outfit with a blue and red striped tie.

The couple may have been going for a patriotic look, as Ivanka’s cherry-colored coat perfectly matched her husband’s tie.