Ivanka Trump visited her father, former president Donald Trump, at least twice on January 6 asking him to stop the violence at the US Capitol.

‘We know members of his family, we know his daughter – we have firsthand testimony that his daughter Ivanka went in at least twice to ask him to please stop this violence,’ the Wyoming Republican said on ABC’s This Week.

Ivanka reportedly referred to the insurrection as an ‘optics issue’ as it was taking place, according to Michael Wolff’s latest Trump book Landslide.

During her interview, Cheney outlined reasons why the committee could consider criminal charges against Trump, arguing he shouldn’t be ‘anywhere near the Oval Office ever again’.

She and Chairman Rep. Bennie Thompson appeared on multiple news programs Sunday where they further clarified the emerging picture of the ex-president’s movements as his supporters shattered windows and beat back law enforcement to enter the US Capitol building.

‘We are learning much more about what former President Trump was doing while the violent assault was underway,’ Cheney said, adding the panel now has ‘firsthand testimony’ alleging Trump watched the Capitol riot unfold on television as his allies frantically begged him to call off his supporters.

‘The briefing room at the White House is just a mere few steps from the Oval Office,’ she said. ‘The president could have at any moment, walked those very few steps into the briefing room, gone on live television, and told his supporters who were assaulting the Capitol to stop.’

‘Any man who would provoke a violent assault on the Capitol to stop the counting of electoral votes, any man who would watch television as police officers were being beaten, as his supporters were invading the Capitol of the United States is clearly unfit for future office, clearly can never be anywhere near the Oval Office ever again,’ she argued.

Thompson told NBC’s Meet The Press that his panel is looking at a timeline of ‘about 187 minutes’ during which Trump sat at the White House shunning appeals to stop the violence. 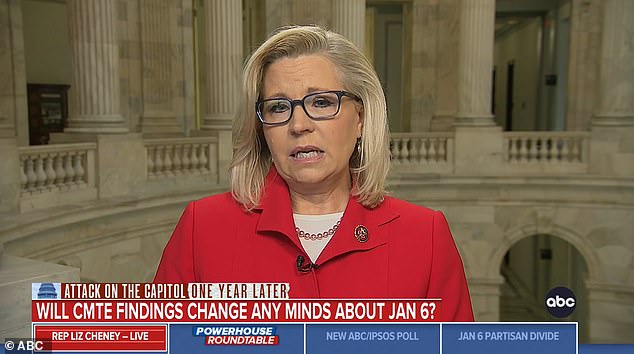 Rep. Liz Cheney, the top Republican on the House select committee investigating the Jan. 6 assault on the U.S. Capitol, says former Pres. Trump is “clearly unfit for future office, clearly can never be anywhere near the Oval Office ever again.” https://t.co/zo7wSq6hc1 pic.twitter.com/Q8v97iEqcY

He added that the committee is weighing whether it can subpoena sitting members of Congress linked to the riot as well.

‘We’ve determined that a number of people made attempts to contact him through his chief of staff … We also have information of other individuals who made calls trying to get some semblance of response out of the White House. But for that 187 minutes, nothing happened,’ Thompson said.

‘We do know now that several videos were made, we don’t have them yet, before the right one was released.’

He didn’t elaborate on what those videos contained but said they were part of the committee’s sweeping records requests to the National Archives.

‘So, he – the president was told, “You need to say directly to your people to go home. Leave the Capitol.” And so it took over 187 minutes to make that simple statement. Something’s wrong with that,’ Thompson said.

Of those 187 minutes, Cheney said on ABC: ‘The committee has firsthand testimony now that he was sitting in the dining room next to the Oval Office watching the attack on television as the assault on the Capitol occurred.’

She added that the White House briefing room was a ‘mere few steps’ away.

‘He could have told them to go home, and he failed to do so. It’s hard to imagine a more significant and more serious dereliction of duty than that,’ Cheney said.

Multiple reports have cited Trump as watching the riot unfold on television, but Sunday marks the first time those reports were confirmed by a member of the committee. 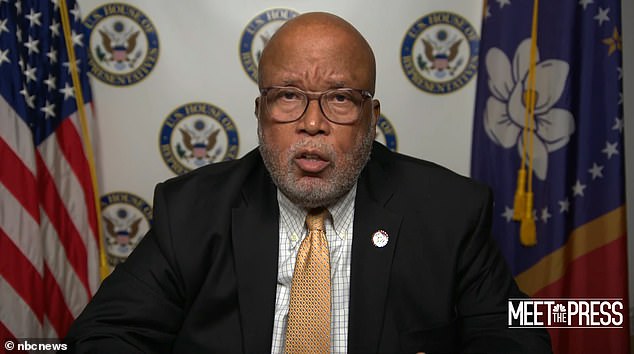 Cheney said Trump’s inaction that day proves he is ‘clearly unfit for future office and clearly cannot be anywhere near the Oval Office ever again.’

Asked about whether that inaction amounted to criminal negligence, Cheney said there are a ‘number’ of ‘potential criminal statutes at issue here.’

The Wyoming Republican Party ousted Cheney in November for her continued opposition to Trump and her work on the committee.

On Sunday she issued an ultimatum for her fellow Republicans: ‘The Republican Party has to make a choice. We can either be loyal to our Constitution or loyal to Donald Trump, but we cannot be both.’

Thompson told Meet The Press host Chuck Todd that he believes Trump ‘weaponized’ his supporters on January 6 — suggesting that some with no intention of storming the Capitol only did so after his Stop the Steal rally speech. 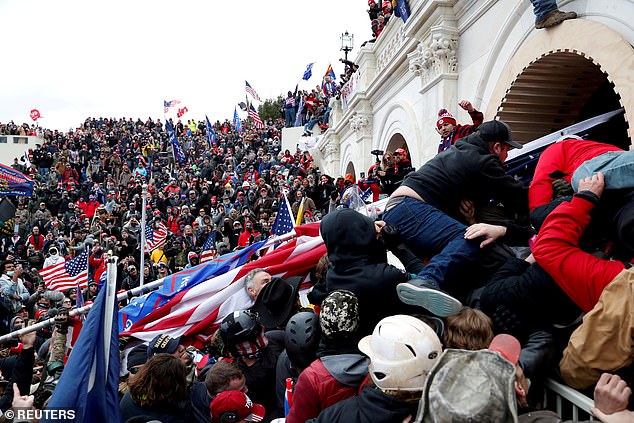 The committee has ‘firsthand testimony’ of Trump’s inaction on January 6, Cheney said, and Thompson said the inaction lasted ‘about 187 minutes’

“The president could have at any moment, walked those very few steps into the briefing room, gone on live television, and told his supporters who were assaulting the Capitol to stop,” Rep. Liz Cheney says of former Pres. Trump’s actions on Jan. 6. https://t.co/zo7wSq6hc1 pic.twitter.com/sUYg0wGKsi

‘I think a lot of people got caught up in the moment, had no intentions of going, but when the president said, “They are up there now taking your rights away from you. You need to go there. They need to hear from you. And I’ll be there.” Well, you know, that kind of weaponized the entire crowd to go to the Capitol,’ he said.

He also said the committee could also step up consequences for lawmakers in Trump’s orbit who are somehow linked to the riot but refuse to cooperate.

‘I think there are some questions of whether we have the authority to do it. We’re looking at it. If the authorities are there, there’ll be no reluctance on our part,’ he said.

Republican Reps. Scott Perry and Jim Jordan are currently under the panel’s microscope.

The committee said it was interested in Perry’s links to ex-DOJ lawyer Jeffrey Clark, who allegedly had Trump’s support in trying to oust Acting Attorney General Jeffrey Rosen over his refusal to participate in efforts to overturn the 2020 election results. Perry refused to voluntarily cooperate.

Jordan recently told Fox he had ‘real concerns’ about the committee’s credibility, but was reviewing its December 22 letter to him.