Ivanka Trump smiles brightly wearing a $1,800 white dress as she steps out from her home

Ivanka Trump opted for a clean, simple look as she stepped out of her home in Washington, D.C. on Tuesday morning.

The First Daughter, 37, appeared happy and bright-eyed as she left the home she shares with husband Jared Kushner, 38, and their three kids wearing a $1,842 ensemble from London-based designer Emilia Wickstead at around 9:40 a.m.

The White House senior adviser kept her look simple, matching her accessories perfectly to the white and black number.

Chic! Ivanka Trump, 37, opted for a simple look as she stepped out of her home in Washington, D.C. on Tuesday morning wearing a white, mid-length dress

Happy: The elegant ensemble featured a matching white belt that cinched in around Ivanka’s waist, highlighting her petite frame

The white number featured black piping that created thin panels down the front of the dress, giving it a very flattering appearance. 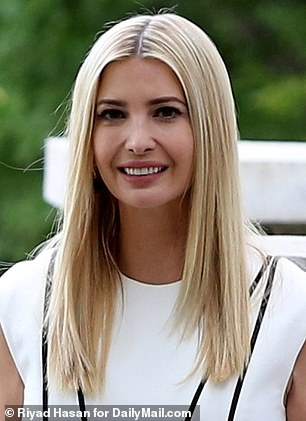 Fresh-faced: The mother-of-three sported what appeared to be a brown, smokey eye and a neutral pink lip-color

The dress featured a white belt that cinched in at Ivanka’s waistline, emphasizing her petite frame.

The mother-of-three kept the look simple, pairing the dress with a pair of simple black stilettos.

Similarly, she was seen carrying a simple black, leather handbag as she headed out for a busy day of work.

She kept her makeup somewhat natural, as it appears that she was wearing a brown smokey eye with a neutral pink lip color.

Ivanka’s accessories were very minimal, consisting only of a thin, gold bangle that she wore on her wrist.

The First Daughter wore her hair, which was pin-straight, in a center parting, allowing her locks to fall loosely around her shoulders.

She appeared happy and in good spirits as she left her house, smiling for the cameras as she made her way over to a private car that awaited her.

Later in the day, Ivanka appeared at Capitol Hill as she attended a GOP Senate policy luncheon. She was seen hopping out of her private car and heading into the building as she made her way inside.

On-the-go! She accessorized the look with a pair of simple, black stilettos and carried a matching black, leather handbag 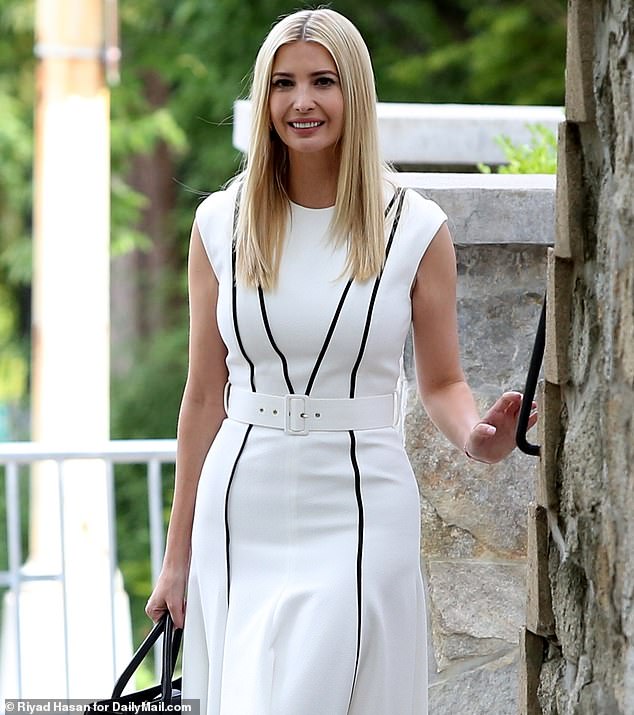 Good morning! Ivanka flashed a smile straight at the camera as she made her way down the front steps of her Washington, D.C. home 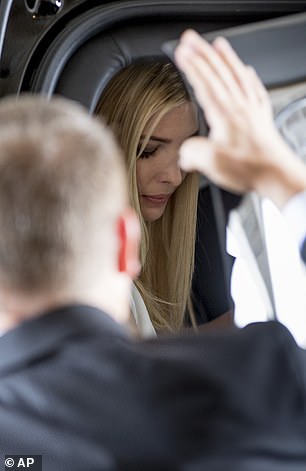 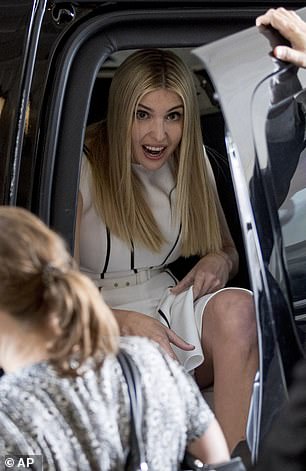 Busy: Later in the afternoon, Ivanka headed to Capitol Hill where she attended a GOP Senate policy luncheon 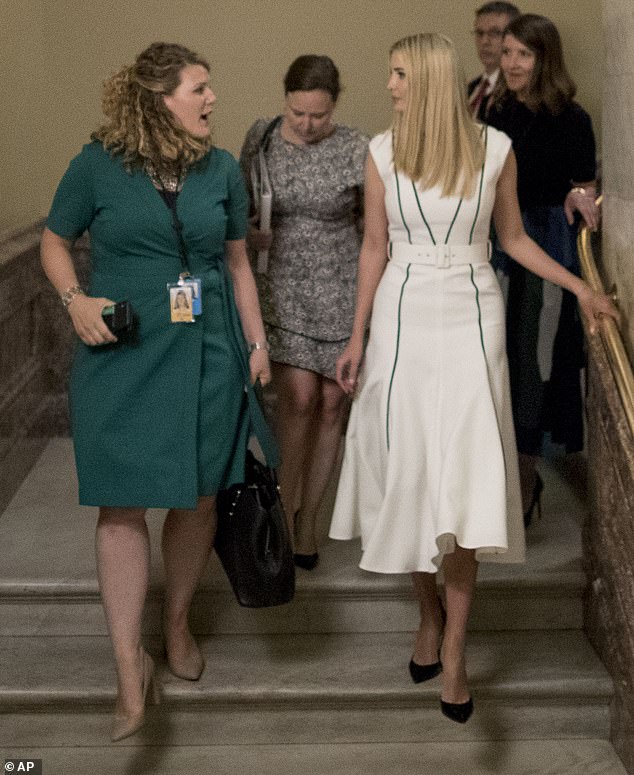 Chatting away: She was seen having a conversation with someone as she made her way down the steps after the meeting 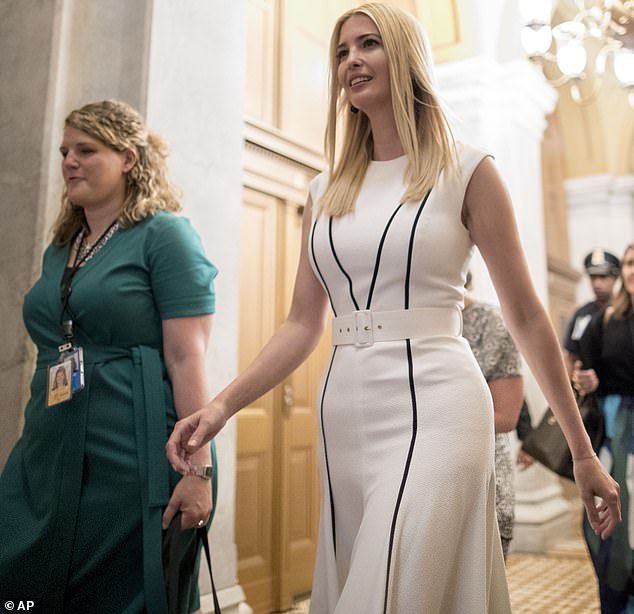 Working away: She took to Twitter shortly after the meeting, saying that it was ‘great keynoting the Senate’s weekly policy lunch’

The First Daughter was later pictured leaving the meeting, as she made her way down the steps with a number of others. 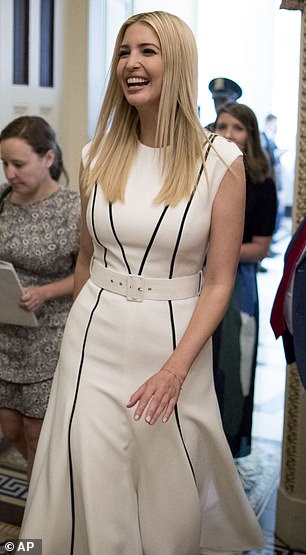 Busy bee: She added that there was a discussion about workforce development policy, Higher Ed Act reauthorization, childcare affordability, and paid family leave at the luncheon

Nikki, 47, shared a photograph of herself, Ivanka and retired United States Army general Herbert Raymond McMaster, 56, as they attended what appeared to be a fundraising luncheon event.

She captioned the image that was taken on Sunday, writing: ‘Loved catching up with these two,’ and adding a love-heart emoji and a number of hashtags, including #CelebratingFriends.

Similarly, Ivanka shared the image to Twitter, captioning it with a love-heart emoji and saying that she loves ‘these two’.

Karlie and Joshua, 34, married in an intimate ceremony on October 18, 2018 after six years of dating.

However, over the weekend, they threw a larger wedding reception in Wyoming.

Surprisingly, Ivanka and her husband Jared do not appear in any photos from the Sunday night party.

However the mother-of-three did share an image of the couple that appeared to have been taken at the ranch where the celebration was held.

The photograph showed herself and Jared snuggling up together as they posed for a photograph outdoors on grassy area. 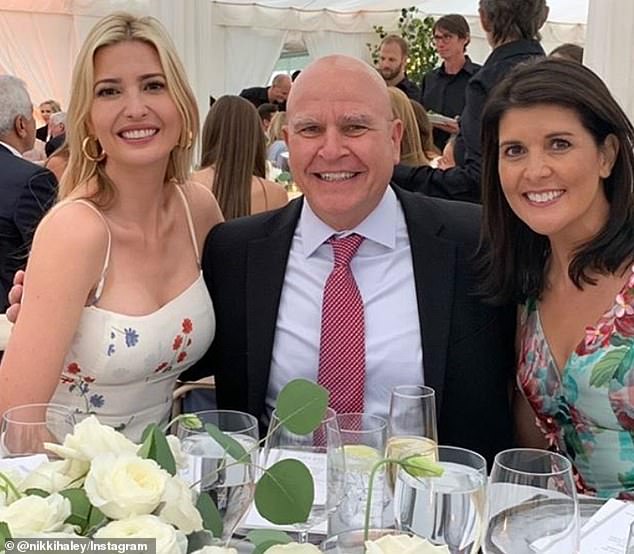 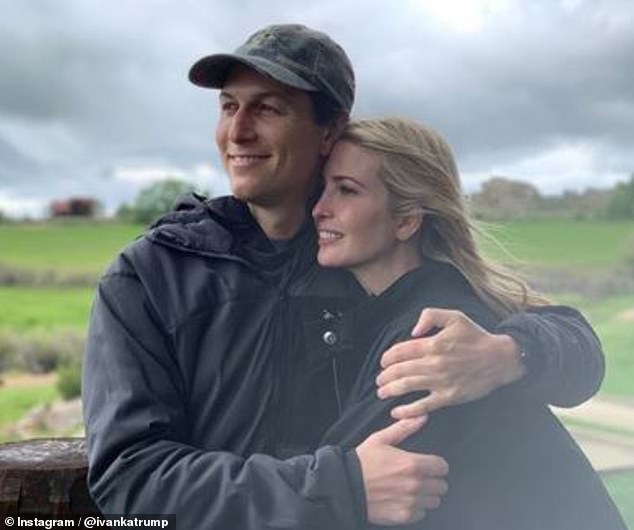 Loved-up: Her appearance comes days after she shared a photo of herself and her husband Jared that appeared to have been taken at the ranch where Jared’s brother got married 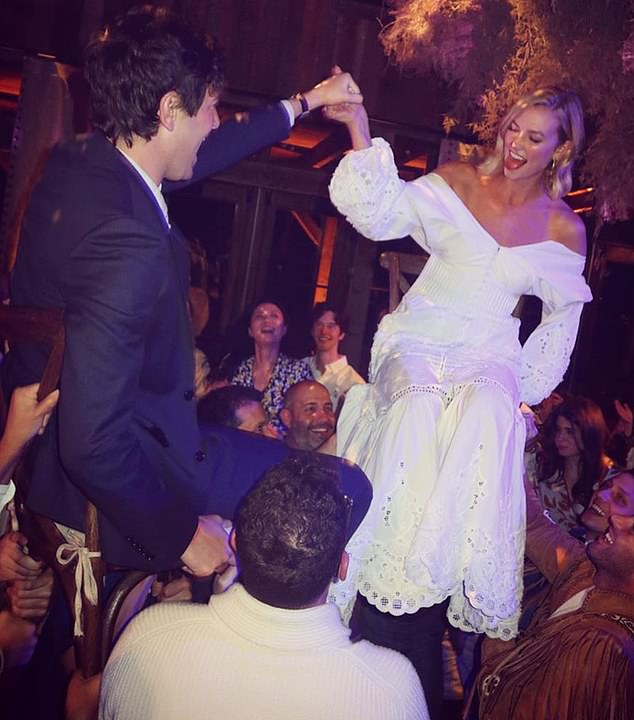 Absent: Although dozens of famous faces were seen at the couple’s (pictured) second wedding, Ivanka and Jared were not seen in any photographs at the event

However, a source who was a guest at the wedding told People that the couple were not in attendance at the actual ceremony.

The source said the couple only actually stopped by on Thursday night, and didn’t attend any of the official wedding activities.

It’s unclear if Ivanka and Jared weren’t invited to the party, or if they simply declined to go.

Meanwhile, the First Daughter is preparing to join her father Donald Trump on a trip abroad as she is scheduled to speak at an event on women’s empowerment in Japan this week.

The President is due to fly to Osaka this week to attend the G20 summit.

Ivanka will be giving ‘a keynote address’ at a side event to the summit dealing with Women’s Empowerment, according to an administration official who sketched out the details.

The topic is one of several she has pursued as an adviser to the president with a West Wing office at the White House.